How best to reimagine the education system for the 21st century? Our current system is clearly not educating young people for the time of the climate and ecological emergency, for a world that is more socially just, equitable and embracing of diversity in all its forms. There are plenty of podcasts where adults discuss what they think the future of education should be, but for Episode 34 of my ‘From What If to What Next’ podcast, I wanted to hear from young people themselves. It turned out to be one of the richest and most extraordinary episodes yet published.

I was joined by Yumna Hussen and Lottie Cooke to discuss what a reimagined education system would be like, to explore “What if young people reimagined the education system”. Honestly, spending an hour in the company of these two remarkable young people, so articulate, passionate and well informed, was just a joy. Both are part of an organisation in the UK called Pupil Power which is “committed to educating, engaging and transforming young minds around the issues impacting our experience of school”. “So”, they add, “we’re demanding an entire transformation in education”. 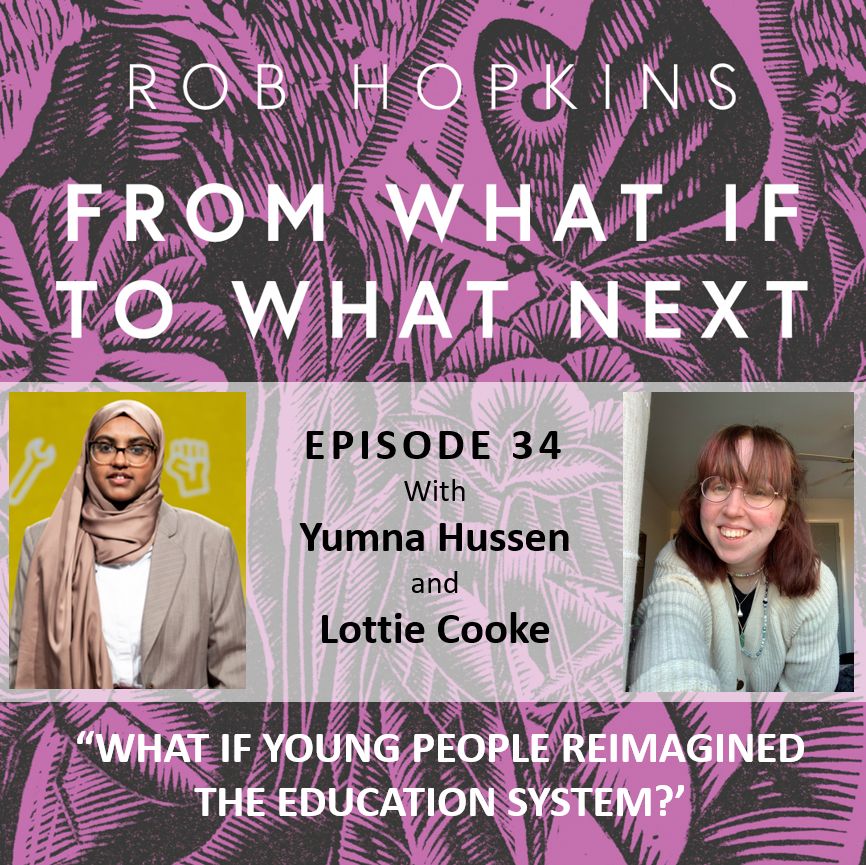 You can hear the full episode by subscribing here, but here are some edited highlights of our conversation. I started by asking them whether the education system needs reforming, or completely reinventing:

Yumna: We need a complete radical transformation of the schooling system and the wider education system. I’ll tell you why. Over the past few years, the agenda of reform has gone on for so long that nothing is actually being reformed. I’ve spoken to international educators about this. The current state of the education system is so dire right now – where young people are just not willing to go to schools (attendance rates are at an all-time low), the current pandemic has exacerbated a lot of social inequalities in society and within schooling – that reform isn’t needed any more.

The government’s version of reform was to give young people a little bit more time, and a little more option in the subjects that they’re picking when they’re in Year 8 and Year 9, or whatever, but nothing’s actually been changed because they’re not including young people in their decision making. When they’re talking about consulting young people, it’s, “Let’s just listen to a few young people for some surveys” but not actually going into schools, seeing what young people need, and actually implementing that in the policies.

So yes, the whole system needs to be radically transformed with young people being seen as learners, and not just students who are there to just be rote learners and come out of this system as just robots, basically.

Lottie: The bells that send us from lesson to lesson at school go way, way, way back to the era when workhouses were a thing, and they were dismissing people from one task to another. With that information in mind, and those policies that currently exist in schools, to have the mindset that we can fix it, is a complete misunderstanding of the situation. Other things that spring to mind like that, we have a young person in our network who goes to a school where when a member of School Learning Team (senior members of staff) enters a room, they all have to stand up. That to me was completely barbaric.

I spoke to more people in our network, and it happens to loads of them. It is rooted in old, old, old structures where you had to be respectful to your higher up, but those higher ups were often racist, queer phobic, what have you. For us to say, “Oh no, we can tweak it and fix it and reform it”, well no, we totally can’t. It needs to be scrapped. If it’s rooted in colonialism, misogyny and any type of bigotry then it needs to go.

The focus of this podcast, and of your brilliant TEDx talk, Yumna, is on imagination and creating the best condition for it to flourish. Would you both say that your imaginations are as they are because of the education that you’ve had, or in spite of it? And what would it feel like to be in an education system that did everything it could to nurture your imaginations?

Yumna: Young people’s imaginations survive despite the system. Despite everything that’s been going on, our imagination is still there. We just need to be able to be in a space that is safe and inclusive for us to vocalise it, for us to realise it. And particularly when our imaginations are suppressed and pushed to a side, the human spirit naturally tends to push back and resist it, because we’re wired as creative beings. We always want to progress. We always want to evolve.

I feel like a lot of people within the school ecosystem, not just young people: teachers, parents, the wider community, local citizens, need a space to come together because there’s one thing talking from young person to young person, a young person and an educationalist or someone who’s really passionate about transforming the education system, or an educator, and another thing talking to policymakers, and there’s another thing actually getting everybody within that space to vocalise what they want to say.

Some people within certain focus groups will take the control and lead on it. You need space for the other people not being able to properly contribute. There needs to be a framework that young people can actually challenge the status quo, and know effective methods for doing so, so they’re able to communicate to these policy makers or grassroots organisations.

Lottie: I remember so many times sat in English lessons and we did creative writing, and our teachers would say, “okay, we’re going to think of a story now. Go, and include these devices.” And that would be all the help we got. We’re taught in such a monotonous way that that’s hard for anyone to do at that age.

Plus, again, you’re making us include certain devices or whatever to tick a box. That’s not creative or imaginative! That’s what capitalism wants us to do, for us to be all carbon copies of each other. I wish that school was set up in a way where it was more like, “Here’s how I would craft a story and how I would work with it. What about you guys? Let’s build one together. What characters could you have in this? Let’s explore this through drama and through games.” Instead of just, “Okay, you did this simile. Good job, well done, you’re now a writer.” Yeah, no, that’s the best metaphor I can think of for how I would want to change imagination in schools.

Lottie: There’s a lot I would say to him! Gavin, if you’re listening to this, we won’t be friends. Number one would be: give up the position. That position needs to be filled with someone who has been through a state education, who has essentially taught, has a really good understanding of all the failings of school, and all the positives of school. That would be my number one thing.

And two, for you to be saying that young people have their opinions heard in education, I would ask you to put your money where your mouth is and actually go into schools, talk to young people, have specific young person conferences. We need to see this happening. You can’t claim youth voice and then back away from the conversation. I want him to be there and to be in it.

Yumna: Exactly what Lottie said. Give up the post. I don’t think you’re fit for it because, you know, we need somebody who’s worked with young people in an education setting who understands the failings of the schooling system and the wider education system. Someone who’s able to actually positively create change and understand that to do this young people’s voices and ideas shouldn’t be taken as tokenistic. It’s not a tick box exercise. The idea should be directly embedded within policy making.

I would say to him that if the vision of the education system that we have is realised, if this vision was realised, young people would feel safe, they would feel confident, they would feel empowered to create change in the world and to be the version that they want to be without this external pressure from schools. Without this external pressure from different individuals telling young people what to do with their lives. And ultimately there will be more contributing citizens in the world.