As the oil and gas industry achieves success in pushing the world towards widespread adoption of methane-based blue hydrogen, some unexpected voices are calling out the industry on its deception of selling blue hydrogen as an affordable and clean source of energy.

To support his argument against blue hydrogen, Jackson accused the oil and gas companies pushing blue hydrogen of making false claims about the fuel’s true costs, noting that the UK Treasury has “been told that blue hydrogen is cheap.”

The two biggest false claims about blue hydrogen are that it is clean energy and that it is economically viable. By misleading the public about these facts, the oil and gas industry, along with partners like investment banking company CitiGroup, hope to get billions in public money to pursue blue hydrogen without having to worry about its economic viability.

As DeSmog reported, industry-backed lobbying efforts to sell the world on the promise of blue hydrogen are succeeding. These efforts include false claims but also often ignore the existing facts about blue hydrogen and the carbon capture technology that it required for its production.

There are several ways to produce hydrogen, but almost all of it currently in production uses methane (natural gas) as the feedstock, with non-renewable energy powering that production.  This process is called steam reforming, and breaks down methane into hydrogen and carbon dioxide. The result is what is known as “gray hydrogen,” or, if technology is used to capture the carbon dioxide emissions released during production, it becomes known as “blue hydrogen.”

Columbia University Center on Global Energy Policy (CGEP), which is primarily funded by the oil and gas industry, is actively pushing blue hydrogen as clean energy. In April, CGEP released a paper advocating for large investments in the U.S. natural gas pipeline system, arguing that in the future the pipelines could be repurposed for hydrogen, thereby making it part of the climate solution.

Then in August, CGEP held a presentation on what they call “Zero-C hydrogen” — the ‘C’ representing carbon. The panel was moderated by Adam Sieminski, senior advisor to the board of trustees for the King Abdullah Petroleum Studies and Research Center. Sieminski was part of a heavy Saudi presence for the event, joined by Khalid Abuleif, chief negotiator for climate agreements for the Kingdom of Saudi Arabia and Dr. Aqil Jamal, chief technologist for the carbon management research division at Saudi Aramco, the state owned oil and gas company.

Such heavy representation by Saudi Arabia on a panel about hydrogen inevitably implied widespread industry support for blue hydrogen. Saudi Aramco’s CEO has told investors the company has big plans for blue hydrogen.The panel did not include any members who were critical of blue hydrogen.

Alex Zapantis, general manager for the Global CCS Institute, a think tank “whose mission is to accelerate the deployment of carbon capture and storage (CCS),” presented arguments for blue hydrogen based on a report produced in April by CGEP and the CCS Institute. But Zapantis made claims that are not possible to substantiate.

“Large scale clean hydrogen production with CCS [carbon capture and sequestration] is actually very well established from an engineering and technical perspective,” Zapantis said.  “This is because fossil production of hydrogen with CCS is decades old and current costs are very well understood.” 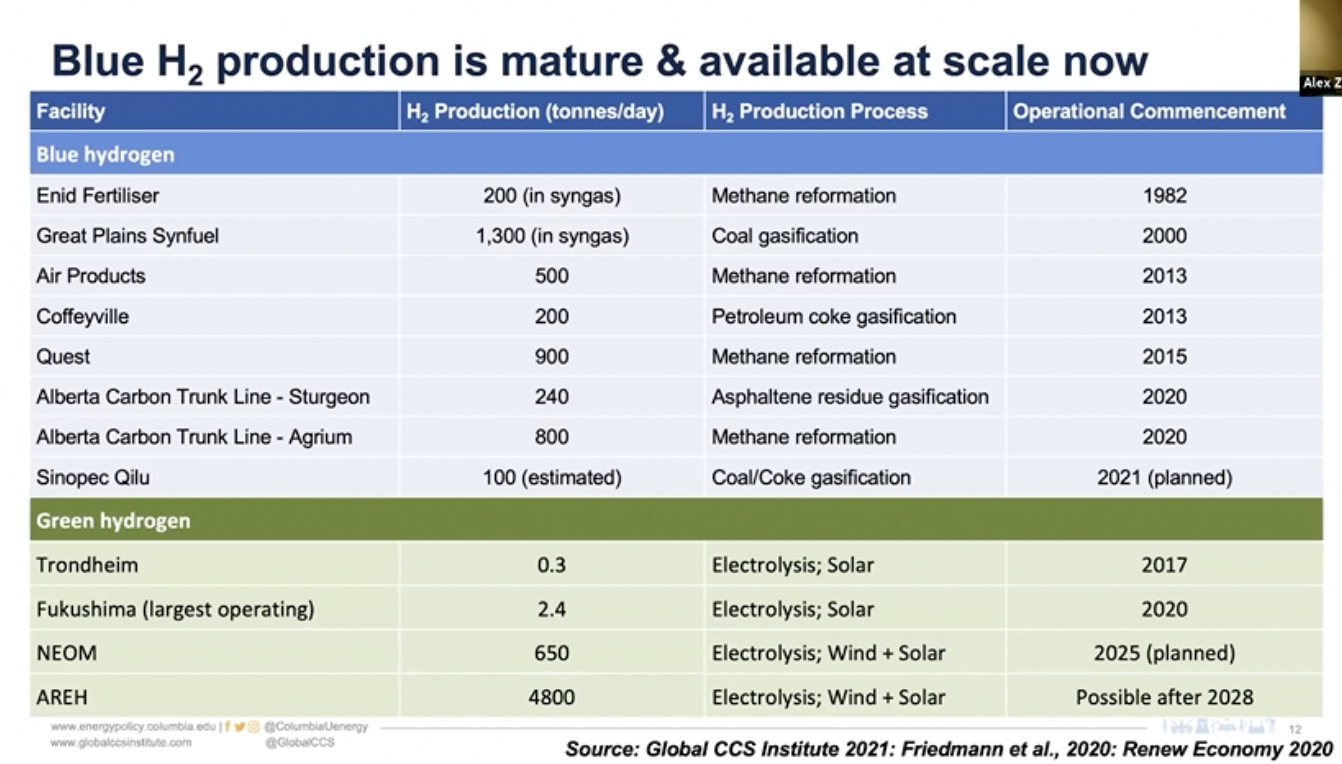 Zapantis continually referred to blue hydrogen as clean, which isn’t true. He even went as far as to describe hydrogen produced from coal as being clean.

The current gold standard for proposed blue hydrogen is based on an assumption of 90 percent carbon capture rates — which have not yet been achieved in commercial production.

Recent online ads from Exxon tout new research into carbon capture in the “early stages of development” that suggest “if commercialized, could help capture around 90% of CO2 from natural gas-fired power plants.”

Our researchers are in the early stages of development with @UCBerkeley to pioneer a breakthrough material that, if commercialized, could help capture around 90% of CO2 from natural gas-fired power plants. https://t.co/QOf7oIuscY pic.twitter.com/29BZrE6W6H

Yet, even if these rates of carbon capture were possible, there is plenty of evidence that blue hydrogen isn’t clean.

A recent peer-reviewed study on blue hydrogen, for example, concluded that even with carbon capture, it likely was dirtier than simply burning natural gas (methane). From an economic standpoint, then, it makes better sense to just burn natural gas. 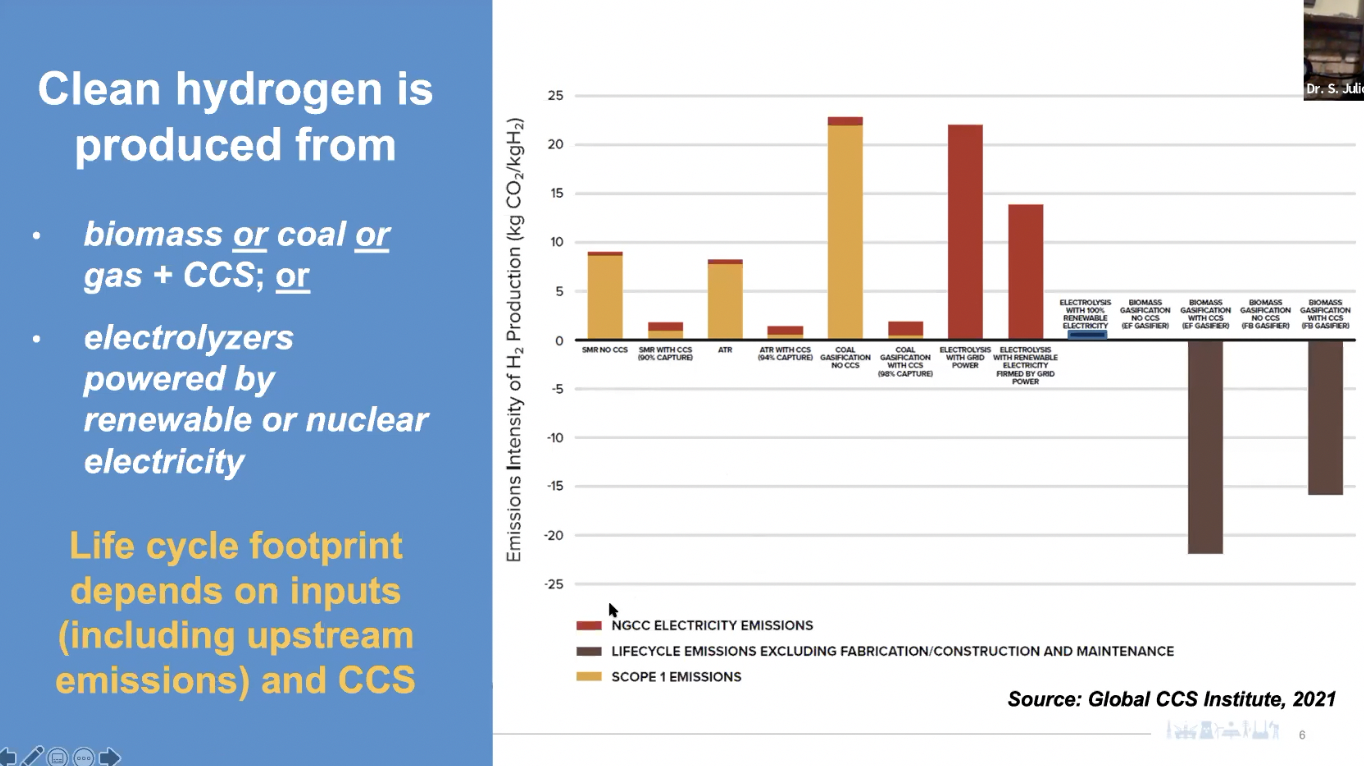 There is no economic argument for blue hydrogen at this time.

In the question and answer session of the event, I pressed Zapantis on the economic viability of blue hydrogen. “If blue hydrogen is currently commercially viable, why is it less than 1% of current production,” I asked.

As Zapantis replied, blue hydrogen “is currently only profitable in very specific circumstances.” Carbon pricing and “other climate policies” will “ramp up” investments, he said. 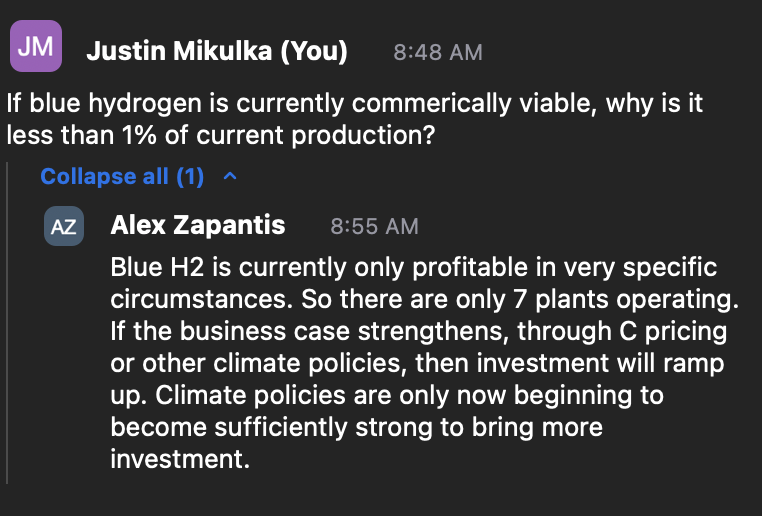 Blue hydrogen therefore only makes sense for the oil and gas industry if the public hands out huge subsidies and guarantees industry profits for blue hydrogen — which is what the UK is proposing.

Evidence of Success is Hard to Find

DeSmog attempted to learn the actual details about commercial scale blue hydrogen production using CCS for the Air Products facility located in Port Arthur, Texas — one of the projects highlighted by Zapantis. This project was supported financially by the Department of Energy and employed carbon capture technology for methane-based hydrogen production.

The goal of carbon capture is to trap carbon emissions before they’re released into the atmosphere and thus the key metric for assessing the success of a project is the percentage of total carbon emissions captured.

DeSmog asked Air Products the same question but got no response.

The mass of carbon captured is meaningless unless we know the total carbon produced and the effective capture rate. It could represent a 10 percent capture rate or 90 percent, but we simply don’t know and the many involved parties that do know, refuse to say.

A 2017 report on the project by consultant CKP & Associates Consulting of Calgary, Alberta, Canada concluded that “The APCI Port Arthur Project can be considered a success.” DeSmog asked Carolyn K. Preston, the author of that report, for the data available on the historical rate of CO2 capture for that project. Preston responded via email:

“It has been four years since I wrote the report on Air Products’ carbon capture facility at the Port Arthur refinery and I have not kept tabs on the project since that time. Unfortunately, I don’t at present have the time to do a decent job digging up information for you.”

In a video touting the project’s success, Air Products mentions that it captures approximately one million tons of carbon dioxide a year but does not mention the capture rate.

A year ago, the Financial Review featured a piece touting the three million tonnes per year capture rate of The Gorgon carbon capture project in Australia. If we were simply going to use the mass of carbon captured as the metric, this project would appear to be three times as successful as the Port Arthur project. And clearly, the industry and its supporters would rather talk about the mass of carbon captured instead of the effectiveness of the technology for its most prominent projects.

We now know, however, that current estimates are that The Gorgon project captured around 20-30 percent of total carbon emissions — well below the target of 80 percent.

Carbon capture has not been proven to be viable on a commercial scale, despite projects like The Gorgon, which cost over $3 billion and had the backing of industry leaders like ExxonMobil.

A 2018 report produced by a team at Air Products did comment on the economics of the Port Arthur project stating: “This project would not have been economically feasible without the funding provided by the Department of Energy.”

There is therefore no current evidence that a blue hydrogen project with 90 percent carbon capture is economically feasible.

A much stronger economic case can be made for carbon capture when the carbon isn’t sequestered but is instead utilized in another area where CO2 is useful. As the Department of Energy website notes, one of the “most widely practiced forms of carbon utilization today” is enhanced oil recovery. This is a process where the carbon dioxide is pumped into a depleted oil reservoir and the increase in pressure from the carbon dioxide forces more oil out of the ground.

While beneficial to oil and gas companies, this process actually leads to more oil and gas production that is then burned, which increases the amount of carbon in the atmosphere.

It also is subsidized with a significant tax credit that has recently been increased. As DeSmog reported, these tax credits have been a financial benefit to the oil and gas industry but also have led to an IRS investigation because the companies receiving the tax benefits have not shown any proof that they have sequestered the carbon.

For natural gas producers the appeal of selling the public on blue hydrogen as a climate solution is very easy to understand. It’s a potentially huge new market for methane and as the world continues to choose renewables over methane for electricity generation, methane producers either must find a new market for their product — or they have to leave it in the ground.

Saudi Arabia has made it very clear it has no intention of leaving any methane or oil in the ground.

This helps explain the prominent presence of Saudi Arabia at an American university’s presentation on blue hydrogen. Blue hydrogen isn’t clean and makes no sense economically  — unless you are in the business of selling methane, like Saudi Arabia.

Saudi Arabia is currently discussing finding partners to raise $110 billion to invest in producing more of its methane reserves. Investors will be far more likely to take that risk if the Saudis and their partners can get the world hooked on blue hydrogen made from methane, using power generated by burning more methane.

The oil and gas industry was successful for decades lying to the public about the science of climate change. Blue hydrogen is a continuation of that “big lie” strategy and it appears to be working once again.