The efforts of Indigenous peoples in North America have helped block or delay a long list of major fossil fuel projects over the past decade, successfully leading to the avoidance of a massive amount of greenhouse gas emissions, according to a new report.

“The numbers don’t lie. Indigenous peoples have long led the fight to protect Mother Earth and the only way forward is to center Indigenous knowledge and keep fossil fuels in the ground,”

Dallas Goldtooth, a Keep It In The Ground organizer for Indigenous Environmental Network (IEN), said in a statement. The report was coauthored by IEN and Oil Change International, a research and advocacy organization focused on transitioning away from fossil fuels.

Indigenous resistance has been key in blocking at least eight major projects, including the Keystone XL pipeline, the C$20 billion Teck Frontier tar sands mine in Alberta, the Jordan Cove liquefied natural gas (LNG) project in Oregon, and drilling in the Arctic National Wildlife Refuge, to name a few. Taken together, those delayed and canceled projects would have been responsible for nearly 800 million metric tons of CO2 equivalent, or about 12 percent of the total emissions of the U.S. and Canada in 2019.

Another half-dozen projects are currently contested, including the Line 3 pipeline in Minnesota, the Coastal GasLink pipeline in British Columbia, and the Rio Grande LNG project in Texas, for example. These projects represent another 12 percent of total U.S. and Canadian emissions, which, if opponents have their way, would bring the total carbon pollution avoided due to Indigenous resistance to 1.6 billion metric tons of CO2 equivalent. That’s roughly equal to the pollution from 400 new coal-fired power plants or 345 million passenger vehicles.

As the report notes, this is likely an underestimate because it only includes 17 of the largest and most iconic fossil fuel projects in recent years. 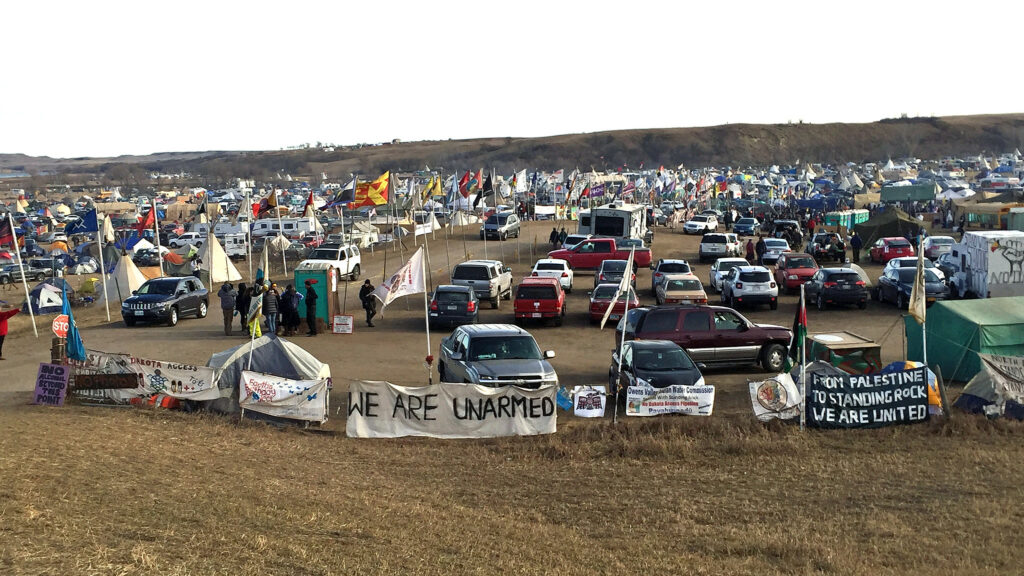 “Indigenous peoples continue to exert social and moral authority to protect their homelands from oil and gas development,” the report stated. “Coupling these expressions with the legal authority of Indigenous Rights, frontline communities, and Tribal Nations have made tangible progress stemming fossil fuel expansion.”

Over the past decade, Indigenous lands in the U.S. and Canada have been targeted by dozens of large-scale fossil fuel projects, as the aggressive expansion of fracking and tar sands extraction subsequently led to a pipeline buildout across the continent.

“I spend a lot of my life fighting stupid projects. It’s like one unbelievably bad idea after another,” Winona LaDuke, program director of the Honor the Earth, an Indigenous environmental organization, told DeSmog. Over many years she has fought to protect both the White Earth reservation in northern Minnesota, where she lives, and other Native American communities from a slew of dirty projects, including coal mines, coal-fired power plants, incinerators and nuclear waste facilities. LaDuke is currently one of the most prominent leaders in the fight against the Line 3 pipeline in northern Minnesota.

“We don’t have another place to go. This is where we live,” she said.

Fossil fuel projects on Native lands often violate the principles of Free, Prior, and Informed consent, a concept that not only necessitates consultation with Indigenous peoples regarding projects on their territory, but requires their consent. That principle lies at the heart of the United Nations Declaration on the Rights of Indigenous Peoples (UNDRIP), a global resolution adopted by 144 nations in 2007.

Years later, all four holdouts changed their position and announced their support for UNDRIP, but the support has been mostly rhetorical, lacking the force of law at the national level. Decision-making for large fossil fuel projects on Indigenous lands still often takes the form of merely consultation, a check-the-box procedure that governments impose on Indigenous communities rather than conducting a process that would require their affirmative consent before moving forward.

“Free, Prior, and Informed Consent constitutes a much more rigorous standard than consultation, and it is a bare minimum standard needed to uphold the rights of Indigenous Peoples,” the IEN report noted.

More recently, Canada moved to codify UNDRIP in June 2021, but it remains to be seen how it is applied to extractive industries on Indigenous lands.

One of the most infamous examples of the disconnect between professed support for UNDRIP and how decisions are made in practice is the Dakota Access pipeline, which crossed treaty territories of the Oceti Sakowin people. In 2015, the Standing Rock Sioux Tribe passed a resolution opposing the pipeline project due to the oil pipeline’s threat to water, treaty rights, and sacred cultural sites, including areas in what is now North Dakota. A broader resistance movement gained further momentum a year later. 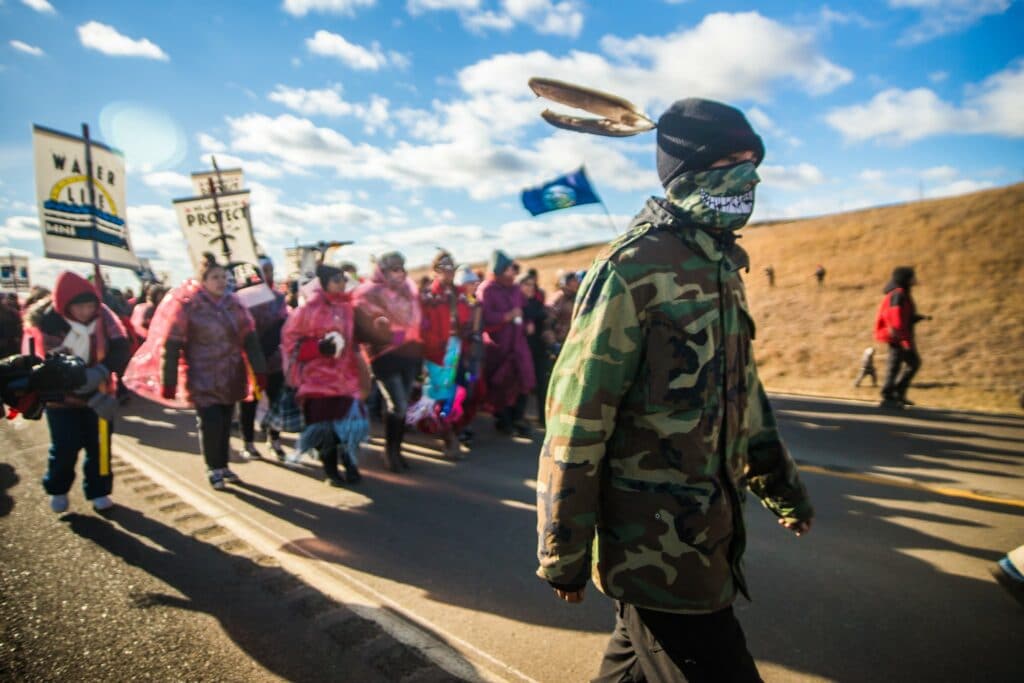 Despite Indigenous opposition, the U.S. government approved the project in July 2016, and state police in North Dakota and private security contracts hired by the pipeline’s owner, Energy Transfer Partners, violently suppressed water protectors opposing the project in the months that followed.

“The tribe was denied access to information and excluded from consultations at the planning stage of the project and environmental assessments failed to disclose the presence and proximity of the Standing Rock Sioux Reservation,”

Victoria Tauli-Corpuz, the UN special rapporteur on the rights of Indigenous peoples, said in 2016 when she called on the U.S. to halt construction of the pipeline.

As DeSmog previously reported, Energy Transfer’s decision to plow ahead with the project despite concerns of the Standing Rock Sioux Tribe cost the company billions of dollars.

According to the recent IEN report,

“what happened in Standing Rock should not be seen as an anomalous incident, but rather a disturbing commonality across Indigenous resistance efforts worldwide.”

It is important to note that the poor treatment of Indigenous peoples has occurred under governments from across the political spectrum, including both Conservative and Liberal governments in Canada, and Republican and Democratic administrations in the United States.

For example, the construction of the Line 3 pipeline in Minnesota continues under the Biden administration, which has said very little about the project despite loud and repeated protest by Anishinaabe peoples and their allies. 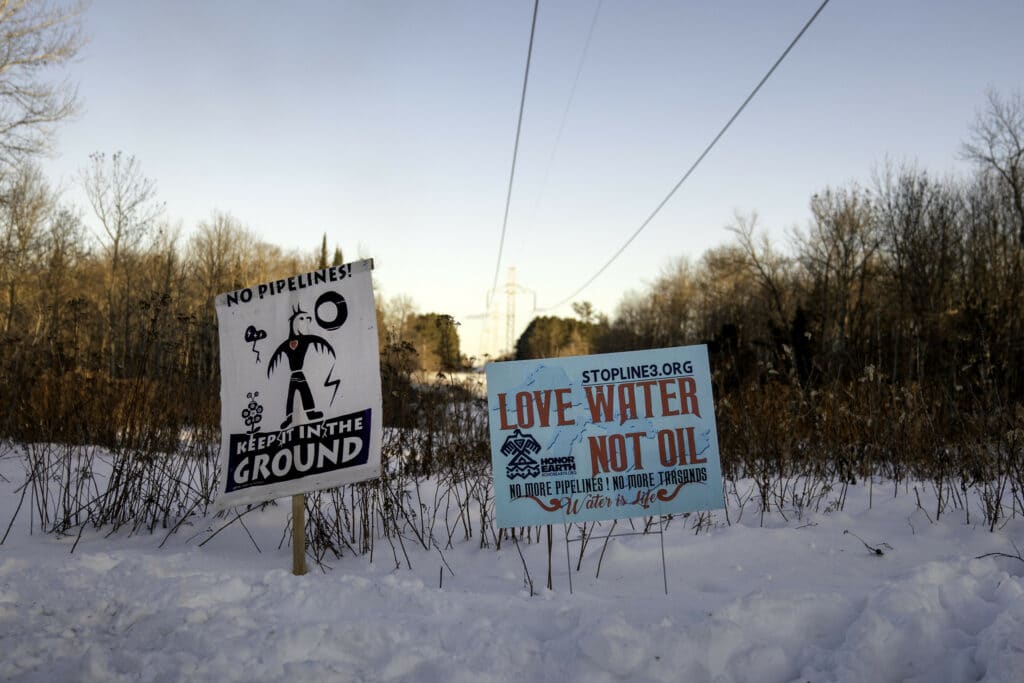 On August 25, 2021, the United Nations Committee on the Elimination of Racial Discrimination (CERD) sent a letter to the U.S. government regarding the violations of human rights of the Anishinaabe. The letter notes the allegations that the permit approval of Line 3 “has been conducted without adequate consultation with and without obtaining free, prior and informed consent,” and also that the pipeline presents threats to lands, food, and sacred sites of Indigenous peoples. CERD requested information and a response from the U.S. government.

“It’s like a bunch of old cronies up here acting like they own the world,” LaDuke told DeSmog, referring to both Enbridge, the pipeline’s owner, and state officials. “And there’s a bunch of us saying ‘no you don’t.’ And we’re going to keep fighting you guys.”

Both the International Energy Agency (IEA) and the UN Intergovernmental Panel on Climate Change (IPCC) have argued that a rapid phaseout of fossil fuels is necessary to avoid catastrophic warming of global temperatures. New fossil fuel projects should therefore be off the table.

The IEN report argues that Indigenous resistance not only goes hand-in-hand with climate action, but it has been an effective strategy of blunting the fossil fuel onslaught.

“Indigenous resistance to carbon is both an opportunity and an offering — now is the time to codify the need to keep fossil fuels in the ground, to safeguard both the climate and Indigenous Rights,” the report said.

For Winona LaDuke, there are obvious lessons to be learned from the victories against major oil, gas, and coal projects.

“One, we are pretty resilient. Two, support us,” she said, referring to funders and other allies in the climate fight. “We’ve got one percent of the resources of the big NGOs, and we’ve got people all over.”

On September 3, several progressive members of Congress, including Reps. Ilhan Omar (D-MN), Ayanna Pressley (D-MA), Cori Bush (D-MO), and Rashida Tlaib (D-MI), traveled to northern Minnesota to call on the Biden administration to shut down construction of the Line 3 pipeline.

A day later, Minnesota Governor Tim Walz was headlining a public event for the Minnesota Democratic-Farmer-Labor Party (a state-level affiliate of the Democratic Party), where he was interrupted by activists opposing Line 3. Flustered, he tried to tamp down the outburst, but ultimately ended the event and left in a motorcade while protestors chanted: “Governor Walz, you can’t hide. Line 3 is genocide!”

On September 7, President Joe Biden visited New York to highlight the destructive damage of the recent floods that ravaged the northeast, where he drew connections to the climate crisis. “They all tell us this is code red,” Biden said. “The nation and the world are in peril. And that’s not hyperbole. That is a fact.”

While President Biden spoke passionately about the climate crisis in New York, his administration has been silent on Line 3, allowing construction to proceed. Enbridge has said that it is in the final stages of construction and oil could soon be flowing through the pipeline.

But when asked if she feels hopeful, LaDuke quickly responded: “Oh my God. I have all kinds of hope.” She pointed to the convergence of recent racial justice movements, growing climate concerns, and strengthening Indigenous movements. 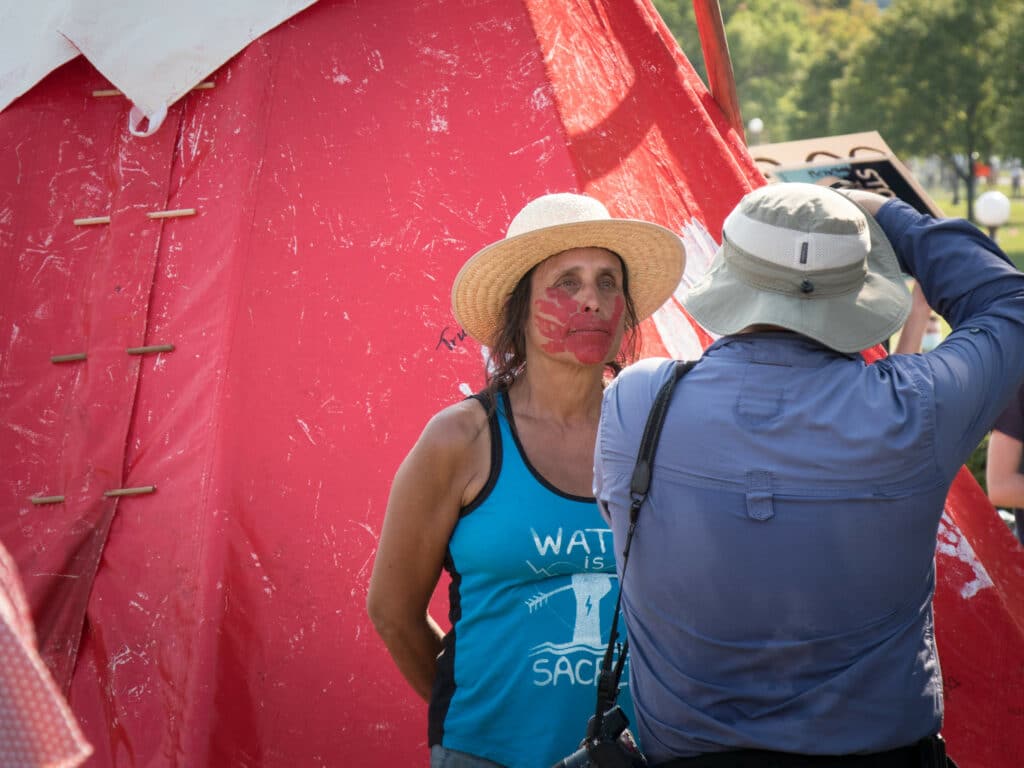 LaDuke also sees the oil industry in its own state of crisis, citing the array of major oil companies that have abandoned the Canadian tar sands amid financial troubles and an increasingly bleak future as the world moves on from fossil fuels. Canada’s tar sands are some of the dirtiest forms of oil production on the planet. ExxonMobil, Royal Dutch Shell, Chevron, and ConocoPhillips have sold off assets in Alberta and reduced their presence in the country. Insurance companies, pension funds, private equity, and major lenders have also cut off financial support for Canada’s tar sands.

“Line 3 is the most expensive tar sands pipeline in history. And the last. Nobody’s going to build another tar sands pipeline. It’s the end of the party,” she said. “The new Green revolution is here and the Tribes are pushing it. It’s just the damn state [of Minnesota] that is so backwards. And the Feds.”

She added: “My experience in fighting these guys … the longer you fight them, the better chance you have. So, I’m still in. We’re all in. None of us are backing down.”