Broadening the understanding of craft products to include raw and value-added products, as well as the shifting the focus away from chefs in urban areas gives a more holistic and diverse picture of what modern southern food looks like today and who is responsible for producing it.

Over the past year, headlines have highlighted the troubles plaguing the restaurant industry as a result of pandemic closures and occupancy restrictions. Yet, the attention placed on chefs and the waiting staff of restaurants ignores the similar problems facing restaurant suppliers, who provide these restaurants with the craft products chefs use in their dishes.

In the United States, the emphasis on the craft food movement often focuses on urban areas, such as Chicago and New York City, where award-winning restaurants are run by mostly white men. Like the pandemic-related headlines, this is only half the picture of what modern craft food looks like today. While urban restaurants and chefs have played an essential role in revitalising the local food movement by highlighting the diverse products available, the products only appear to consumers as one part of a composed dish.

The conversation around craft food has three main tenets that need to be addressed. First, what does it mean to call something a craft product? Second, what is the relationship between the rural areas where many craft products are made or grown and the urban areas where they are sold? Third, who are the craft producers beyond those visible in the metropolis?

Traditionally, craft products are value-added products that are produced by small-scale producers whose biographies and techniques embed the finished product with authenticity and legitimacy compared to their mass-produced counterparts. For example, homemade jams sold at a farmers’ market by the person who grew the fruit is a craft product, but a brand jam bought in a supermarket is not because it is industrially manufactured and there is no connection between a specific producer and the final product. But craft extends beyond value-added products like jams, wine or country ham (the American equivalent of prosciutto or Serrano ham); it also represents the purveyors who are responsible for sourcing the raw ingredients, such as the crabbers and farmers who sell their products at local markets.

Despite the prevalence of craft producers across the southern region, it is not always feasible to restrict local craft products for local consumption. For example, as soft-shell crab season approaches, crabbers begin pulling the crabs from the waters around Virginia and North Carolina, yet most of these crabs will end up on plates in New York City where diners and chefs are willing to pay a higher price than the chefs in the small coastal towns the crabbers call home. While posing an initial problem for small family-owned restaurants, this gap also offers promise for the small-scale crabbers who are unable or unwilling to sell their products outside their local region, thus bonding the small family-owned restaurants to local seafood suppliers. The challenges of keeping local seafood available for local customers are part of the broader dearth of conversation about what craft food looks like beyond those major urban areas where craft products are consumed but rarely produced.

Looking only at the urban centres leaves us with an incomplete picture of modern southern food habits and a misleading notion that craft food suppliers are overwhelmingly middle-class white men and women who choose the industries instead of pursuing college degrees. Indeed, the picture of craft producers is as diverse as craft food itself. Ranging from those who work with the raw products and are at the whim of the seasons, such as farmers and shrimpers, to those who take raw products and transform them, such as winemakers and country ham producers. Many of these producers are the latest generation of their family to work in the industry, with some farmers and country ham producers being the third generation to run the business. In the case of one family business, the daughter overcame gender stereotypes and stepped in to run the company, making her one of the few women curemasters in the region and at the helm of one of the most prominent country ham businesses.

Trendy modern southern restaurants now dot the streets of Charleston. While playing an important role in keeping local food local and creating a consumer base for heirloom products such as Carolina Gold rice, they are only half the picture of what southern food is today and has been throughout history. Beyond the racial disparities that have characterised the region since its inception, the South has never just been black and white. Instead, the region has always been home to a diverse group of people, from the indigenous people who have always called the North Carolina coast home and the Vietnamese refugees who brought their fishing skills to the Gulf coast, to the more recent increase in the Latinx population across Kentucky. These groups are bringing their own touch to what modern southern foodways look like today: a blend of tradition and innovation. These influences add much-needed depth to the narrative surrounding the craft food movement. 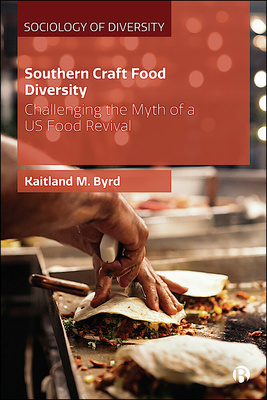 Southern Craft Food Diversity by Kaitland M. Byrd is available to order on the Bristol University Press website for £18.39.

Image credit: By Kathleen Conklin – Flickr: A Delicious Crabcake at the Middleton Tavern, CC BY 2.0, https://commons.wikimedia.org/w/index.php?curid=15956916