In December of last year, thanks to funding from The National Lottery Community Fund, the Transition: Bounce Forward project distributed £140,000 to 112 Transition projects across England. One of those projects was hubRen, a Hub of Resilience imagined by Amy Scaife of Transition Leytonstone who asked herself:

What if the plans for the thriving future became widely available? With accessible language, beautiful art and friendly faces to discuss and plot new plans with?

What if these hubs of information, inclusivity and imagination popped up in a park, or a high street corner, or place of worship?

Inspired by reimagined cargo trikes she set out to create a mobile hub of art, imagination and connection, seeding community decarbonisation and resilience in a climate changing world.

In this piece Amy shares with us her experiences and learning from beta testing the idea at a local arts trail. 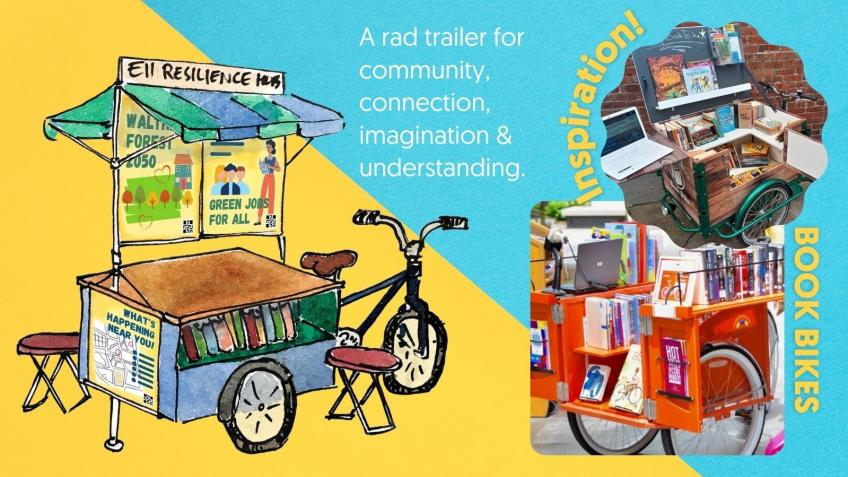 When I saw that the theme of this year’s Art Trail was Possible Futures, I knew that the hub had to participate in some way, despite not being in its perfect bike trailer form yet.

It was… interesting. Not gonna lie, how I imagined it and how it turned out were two quite different things (are they ever the same?). It took me a few days to pick myself up from the ground when it finished, but I am glad we went through with it. I learned a huge amount and had a great many illuminating conversations, forcing me to clarify my own understanding of certain subjects (population and China being the most commonly brought up ‘deflectors’) along with the way that I communicate about them, and re-affirming that I really do love chatting to people about climate, solutions, responses and emotions.

Boy oh boy are folk OBSESSED with recycling. But obsessed in a vaguely frustrated way, where they are aware it’s quite a futile gesture in the face of the scale of the crisis, that most is incinerated or shipped to Turkey, but they still do it anyway because it’s the thing they can do. What became so clear after three weeks of chatting and listening, there is a huge, scary, foggy chasm that gapes between ‘I’, and ‘the government’. This individualised, neo-liberal, post-Thatcher, post-Reagan society seems to have taken a huge eraser to people’s ability to imagine and connect with a response that is collective, communal and civic. It is going to be so critical to remind people of their collective power and to gently guide them towards finding it, if we are to have any chance of challenging and surviving what is coming.

A highlight was definitely our ‘Ask A Climate Scientist’ session on the last Friday eve. We were joined by esteemed Professor of Global Change Science, author of The Human Planet and all round decent dude, Simon Lewis. 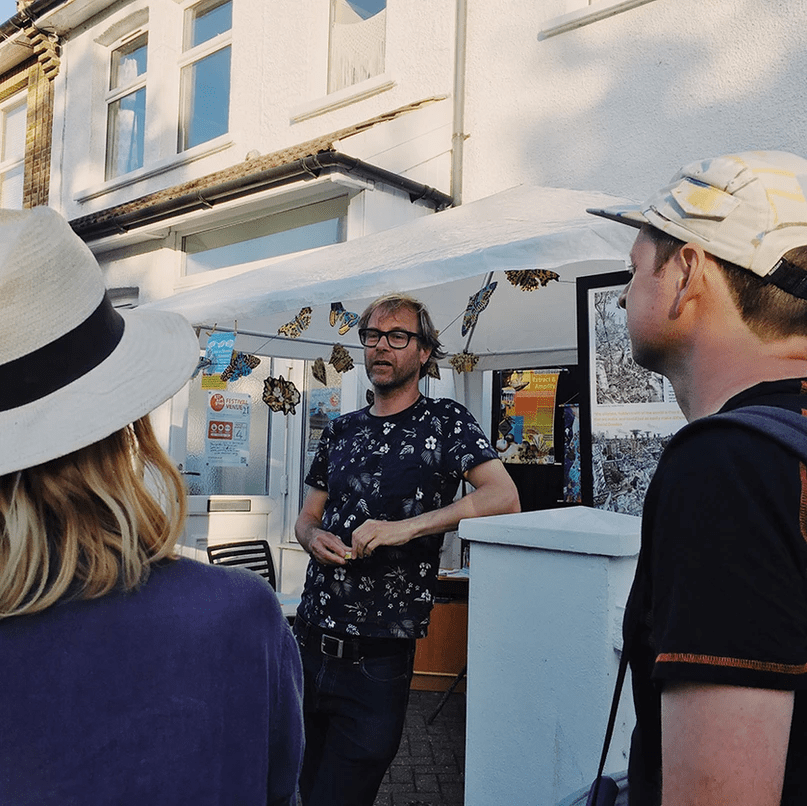 There were illuminating conversations, a refreshing beverage or two, and some lovely new neighbourhood connections were formed. Thanks Simon!

Spending many hours hanging out on a couch outside my house has allowed me to properly meet a lot of the neighbours that the last year of lockdown had blocked. Also very grateful for the support and company provided by the ever enthusiastic Steph, Sarah, Hannah and Winter.

Attendance wise overall, we had a slow start, a busier middle weekend and high hopes for the last weekend. Sadly, extreme weather hit us with 30°C on Sat and 32°C on Sunday. By 2pm the streets were dead. I know it’s nothing compared to the recent 49’s and 50’s of Canada and Pakistan, but still far above what this usually cool and damp city is designed for or used to. In the days following the last sweaty pack down of the borrowed gazebo, I definitely felt a little deflated at the quietness of some afternoons, of the often averted gaze, the awkward smiles and hurried pace away of folk both known and unknown. No matter how welcoming a space is, climate is still an unwelcome topic of discussion, bringing up feelings of shame, anxiety, fear and uncertainty. 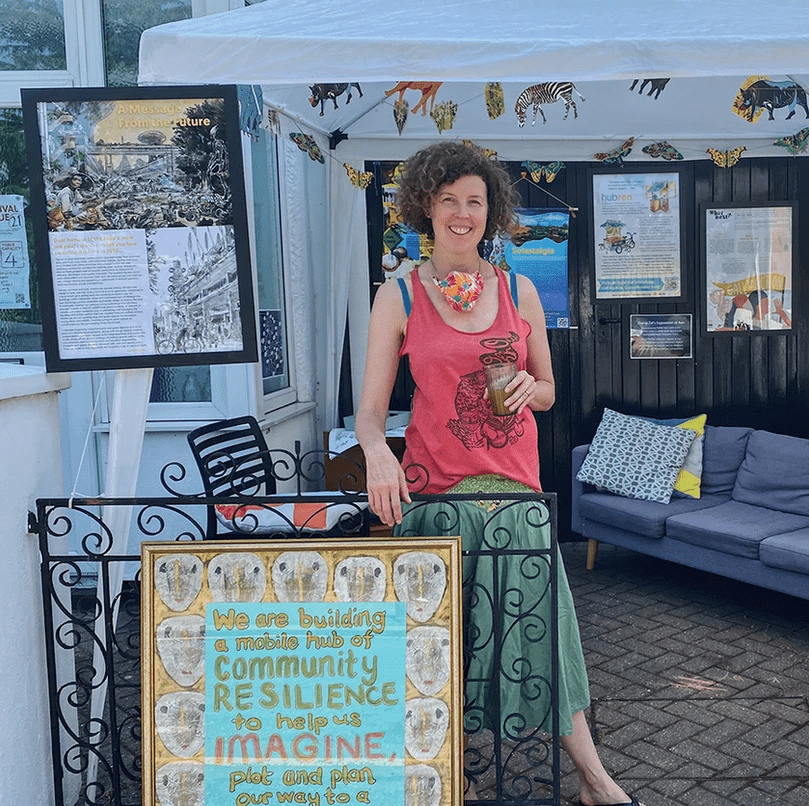 But then a strange thing began to happen. Walking to the grocery store I bumped into an elder mother and son duo who would regularly trundle past the hub, often pausing to engage in a neighbourly hello, but never outwardly showing any interest in what the hub was about. But when I ran into them a week later we stopped in the shade and they both directly engaged me in a conversation that wandered across migration, BLM, reparations, residential schools and the cruelty inherent in colonisation. It was unexpected and I felt quite moved and honoured by the unprompted and candid sharing of their ideas and experiences.

Two different school mums who hadn’t been able to make it to the hub but had seen it online, found me to talk about their concerns, hopes and plans. It looks like a school workshop is now happening. Another school parent and I have been talking about the recent local floods on whatsapp and what our kids lives might look like.

From the local knowledge that was added to our ‘Map of Community Resilience’, some new, tentative relationships are forming. 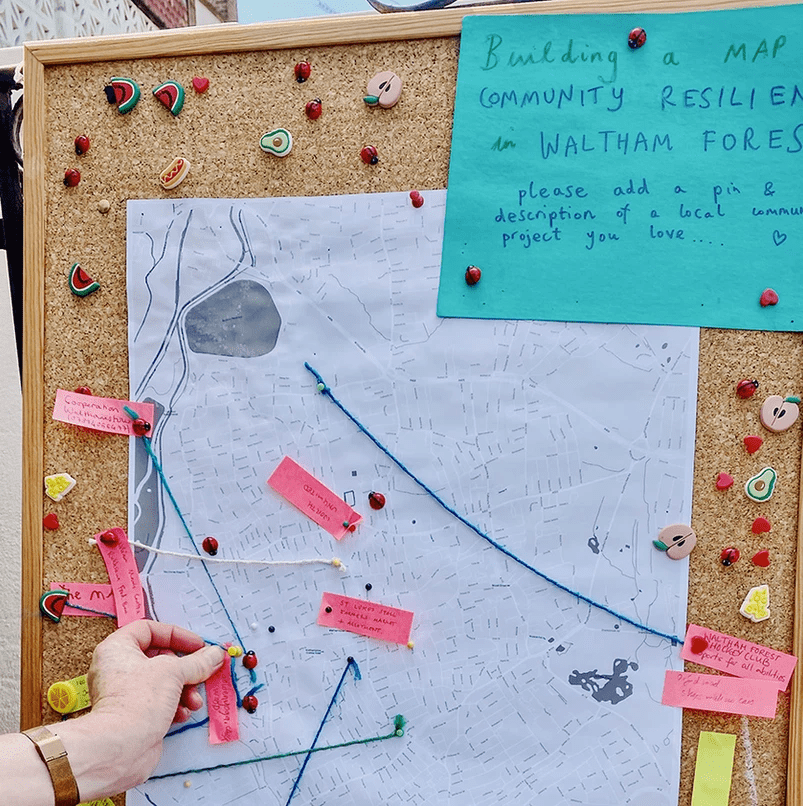 The collaborative map of community projects.

What I have come to realise is that the hub is like casting a handful of seeds out. You don’t necessarily see where they all land, or which ones will germinate until a bit later. They may bear fruit in ways you don’t anticipate. I know these interactions are so tiny in the grand scheme of things, but that is what seeds are, tiny packets of potential that can crack concrete and lift roads. They just need time, the right soil, water and sunlight.

For more information about hubRen and to subscribe to their newsletter check out – https://www.hubren.org/