“You can feel the wind talk to the rice.”

It’s Rice Lake Village on the White Earth Reservation – at the site of the mother lode of wild rice, Lower Rice Lake. Lew Murray stands in front of the gathering — about 200 or so people. They have come together to greet the runners who’ve just covered 26 miles to honor the wild rice — and protect it. This is a joyful crowd. Local residents are just starting to get together out-of-doors after pandemic restrictions ease, and we are all happy to see each other.

For some, it’s been a long time alone. In addition, for those of us facing police many days on end to hold off construction of the Enbridge pipeline through our homelands, it’s a welcome sanctuary from the violence — emotional, ecological and physical. More than anything, the welcoming committee organized by community members brings us out to reaffirm our commitment to our wild rice and water.

“I’ve been around the sun about 48 times and that rice has been with me all those times. There’s really nothing like it,” Murray says. He remembers when he started ricing. “At 13 years old, I was staying at the south end with my cousin, and an old man came over and said, ‘I need a poler.’ After that I poled. I’ve done that since. It’s a great way of life for us. Take care of our rice and our water.” 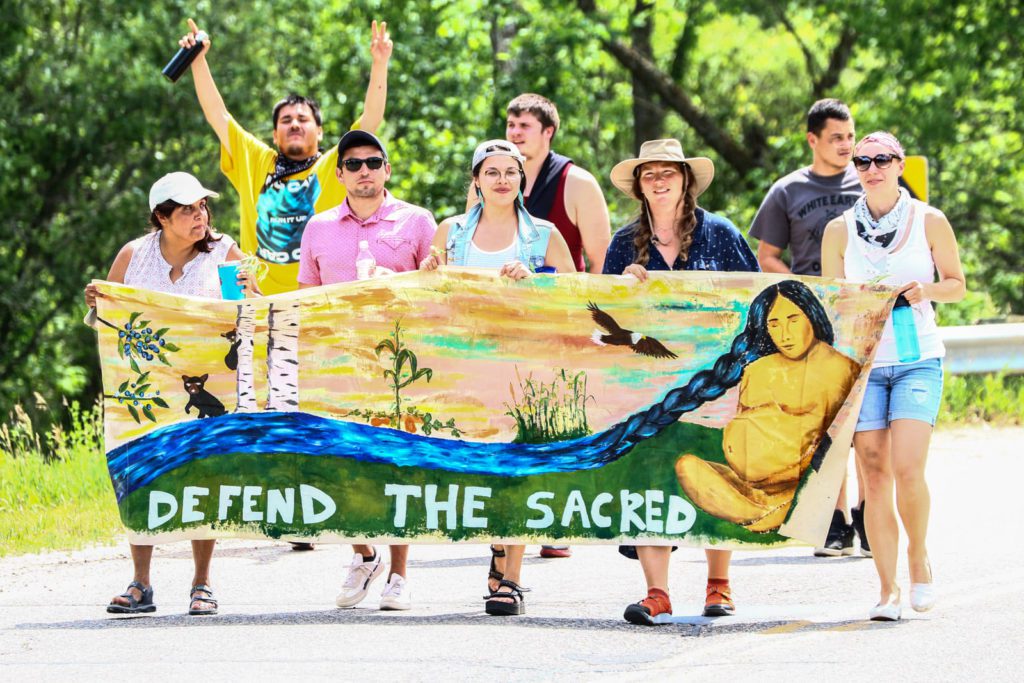 This year is the lowest water level most of us can remember, and that’s made harder by a drought, irrigation and water takings from the lake. So, we hold this special maawanji’idiwag — come together, meet with each other – to receive the runners. We are still here, and Lew’s story is the story of many young men on the reservation — ricing since they were kids.

Murray is one of three or four big wild rice processers on the reservation, finishing tens of thousands of pounds of rice, creating a finished rice that’s light tan in color and flavored by the unique taste of wood parching. This is the real thing. 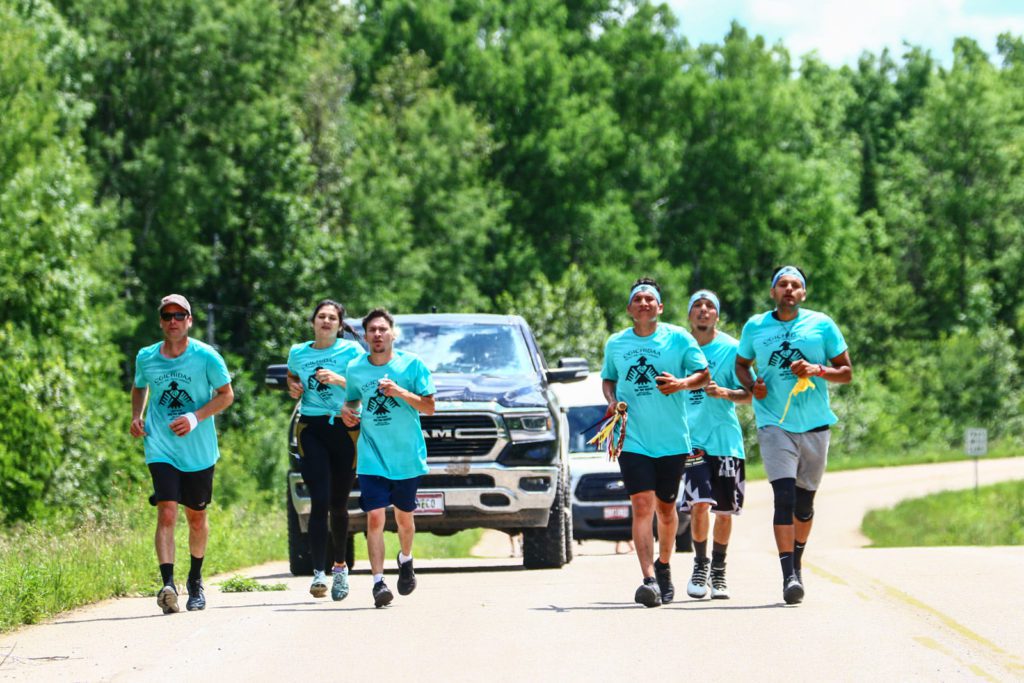 The wild rice economy continues, and as Cody Eaglefeather reminds us, is a part of our migration stories, and a centerpiece of our identity. “We are having an identity crisis,” he tells us all, talking about the challenges of this generation in keeping our way of life. Cody, like many other ricers, can bring in thousands of pounds of wild rice in the fall, supporting not only his family, but many families on the reservation.

Wild rice is our freedom. For 200 years, the state and other colonial institutions have been trying to destroy that freedom — through policies, subsidies, arrests, and destruction of wild rice habitat.

The rice harvest unifies community members; it’s a time of great excitement and delight in the village. Not surprisingly, Rice Lake village has opposed Enbridge’s plans since Day 1, demanding hearings be held right here, and joining thousands of other foes who took a stand against it at the Headwaters of the Mississippi. Enbridge’s work to divide the White Earth community with lucrative contracts to tribally owned Gordon Construction and the corporation’s plays in tribal politics are not viewed well here. This gathering is attended by most of the tribal council, who witness the strong resistance to the Canadian tar-sand oil conduit, Line 3. 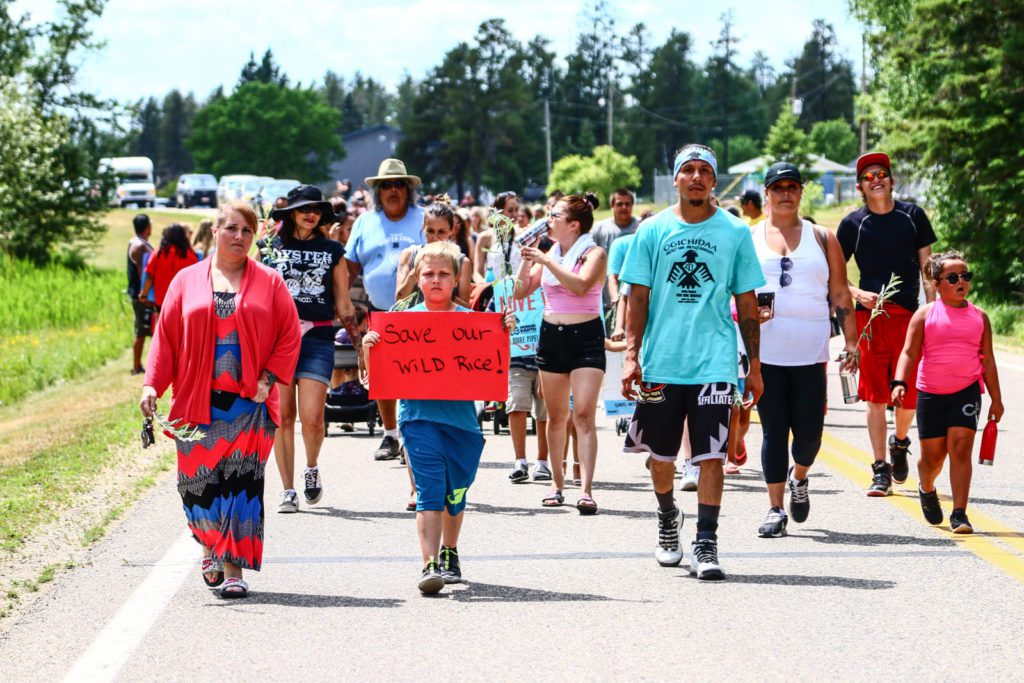 Wild rice, or manoomin in Ojibway, is the way of life for this village, and for most of the White Earth Reservation. It feeds the body and it feeds the soul, with hundreds of thousands of pounds produced for not only our community but for sale. Today the manoomin is feeding the souls, as tribal members and friends come and gather to honor the rice, and to challenge not only Enbridge, but the Minnesota Department of Natural Resources, which has just allocated 5 billion gallons of water to Enbridge for Line 3, in the middle of the deepest drought we can remember.

The week before the maawanji’idiwag, tribal members saw hoses pumping water from the Upper Rice Lake by Knife River Contracting, something the company has done for years. We saw a bunch of other local businesses and farms just taking water, with very little if any regulation. The Minnesota Department of Natural Resources policies are being challenged, the rice needs the water, and those policies need adaptation. After all, the White Earth tribe in 2019 recognized the Rights of Manoomin, as a part of a growing movement internationally to strengthen regulatory and constitutional protections for the rights of Nature over the rights of private property and corporations.

At the gathering, Silas Neeland, a 14-year-old from Rice Lake Village, takes a microphone in front of the crowd. He’s been organizing youth and events for the past year, and during the Covid-19 pandemic, he went as far as Washington, D.C. to have his voice heard. He tells our community to stand up for the rice: “The Black Snake is 13 miles from our wild rice lake. It’s time to kill the Black Snake,” he says. 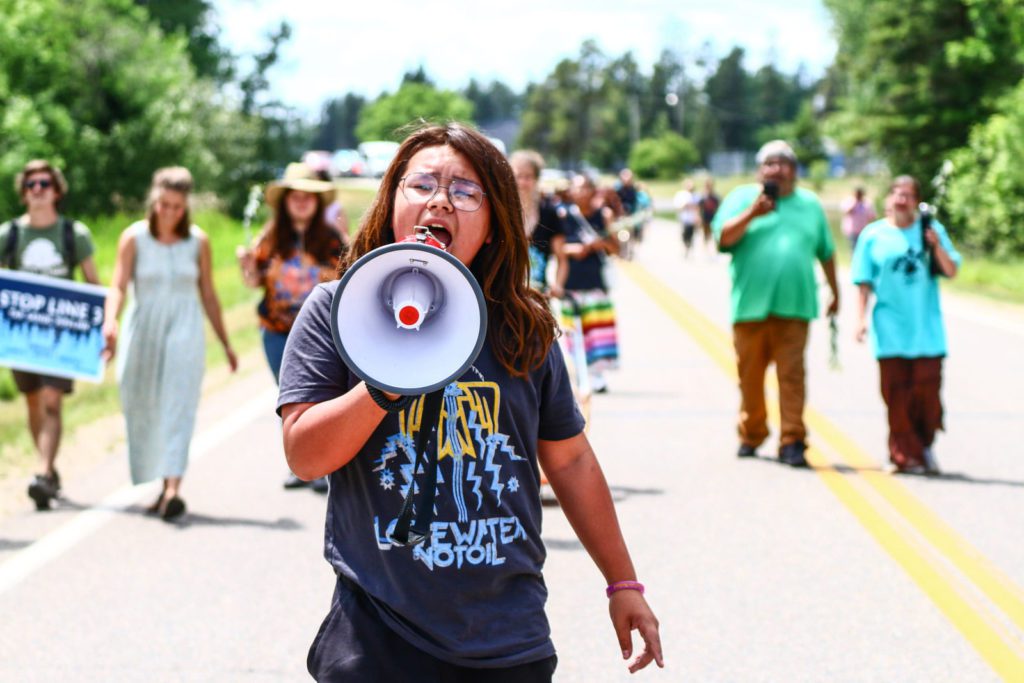 Lew Murray has been ricing most of his life, and like hundreds of other Anishinaabe from the reservation, relies on the manoomin for sustenance. He and fellow ricers travel for the first harvest on the lakes in the south — Big Sandy, the Sandy Lake Flowage, Minnewawa, the Crow Wing lakes and more. The rice on Shell Lake is large, the river rice smaller.  The harvesters then move closer to Lower Rice Lake, into the Tamarac Refuge, some of them ricing over by Leech Lake or through the Ottertail River systems. The people follow the rice. It ripens differently in each lake, or region, and that traditional ecological knowledge is kept by ricers generation after generation. Those lakes are throughout the l855 treaty territory, and today, in the impact zone of Line 3, the last tar-sands pipeline.

This is the only place in the world for this plant. Its harvest is the mark of a sustainable economy, our northern economy. For thousands of years, this has been a wild rice economy, with non-Indians benefitting as well as our tribes — by parlaying Native rice to gourmet buyers from the east and west. 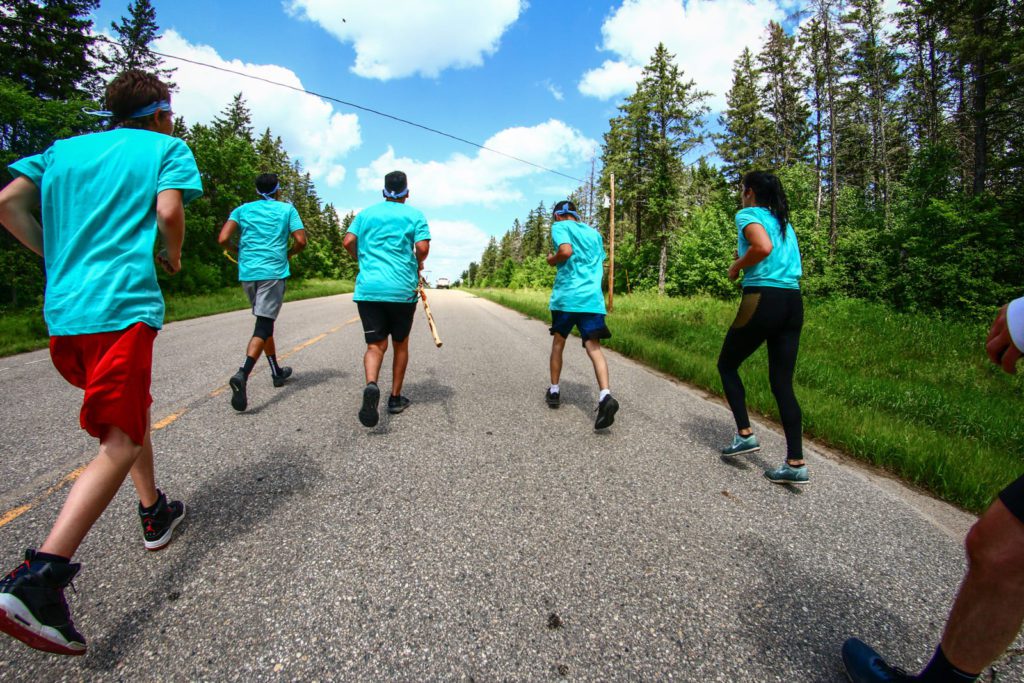 In the l970s came the advent of paddy rice, created by the University of Minnesota. Paddy rice, grown in diked paddies with fertilizers and chemicals, has ravaged the wild rice economy of Minnesota. The university’s work and the creation of patented seeds of the “state grain” ultimately led to 75 percent of what’s called wild rice being produced today in diked rice paddies in northern California — a la Gourmet House, Uncle Ben’s, and Indian Harvest Wild Rice.

The university’s historic work pushed the traditional wild rice economy to the margins. Coupled with the mismanagement of water by the Minnesota Department of Natural Resources and the Minnesota Pollution Control Agency, it has resulted in the destruction of 70 percent of the wild rice in the state.  That’s why the remaining lakes are so critical to protect, not only from Enbridge, but from industrial agriculture runoff — and of course, from the ever-looming mining industry, attempting a comeback at the end of the mining era. Protecting the water is protecting the wild rice. 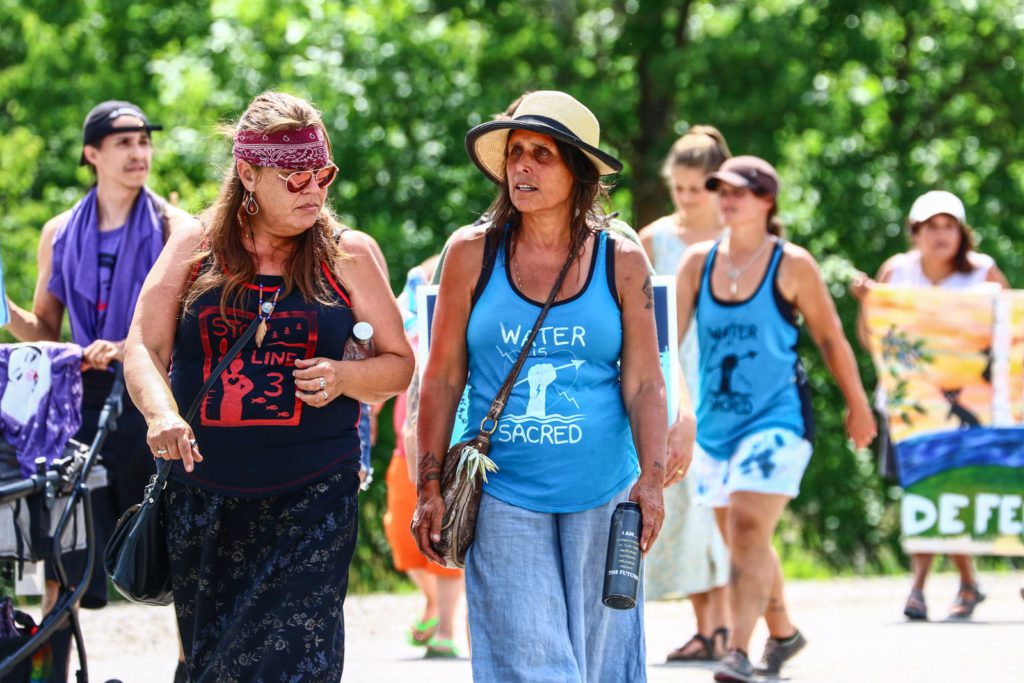 The Body Burden of Hating

Coming to the village was a great emotional relief. I hadn’t realized the body burden of the hating. As I looked on and listened to the laughs and stories of Rice Lakers, a tremendous feeling of love and healing came over, again. Our people love our water and our manoomin.

I’m having some serious flashbacks to Standing Rock, as local media and Enbridge fan some racism. Why would you hate on water protectors? Hubbard County has arrested hundreds of people for standing for the water, and yet, in the midst of the deepest drought we can remember, stands by as Enbridge takes 3 billion gallons in dewatering, pushing around our freshwater like it’s a waste product.  The Shell River, coming from the reservation and into the l855 treaty territory, is running at 25 percent capacity, yet Enbridge proposes to cross this river five times, and, each time, take hundreds of thousands of gallons out of the river to run pumps. Let alone the dewatering of all the trenches by the pipeline.

In the meantime, thousands of Minnesotans and others are coming to support our people, supporting the treaty rights of the Anishinaabe as well as opposing the taking of water by the foreign multinationals.

“Asserting our treaty rights is not a crime, we are here to protect the water. Our non-native relatives have been moving up in a good way to defend the treaty,”

Nancy Beaulieu tells the crowd. Nancy, along with Dawn Goodwin from the Rise Coalition, succeeded in bringing almost 3,000 people to the Treaty People’s Gathering in early June, and then held ceremonies on the Enbridge route, holding a space for eight days. 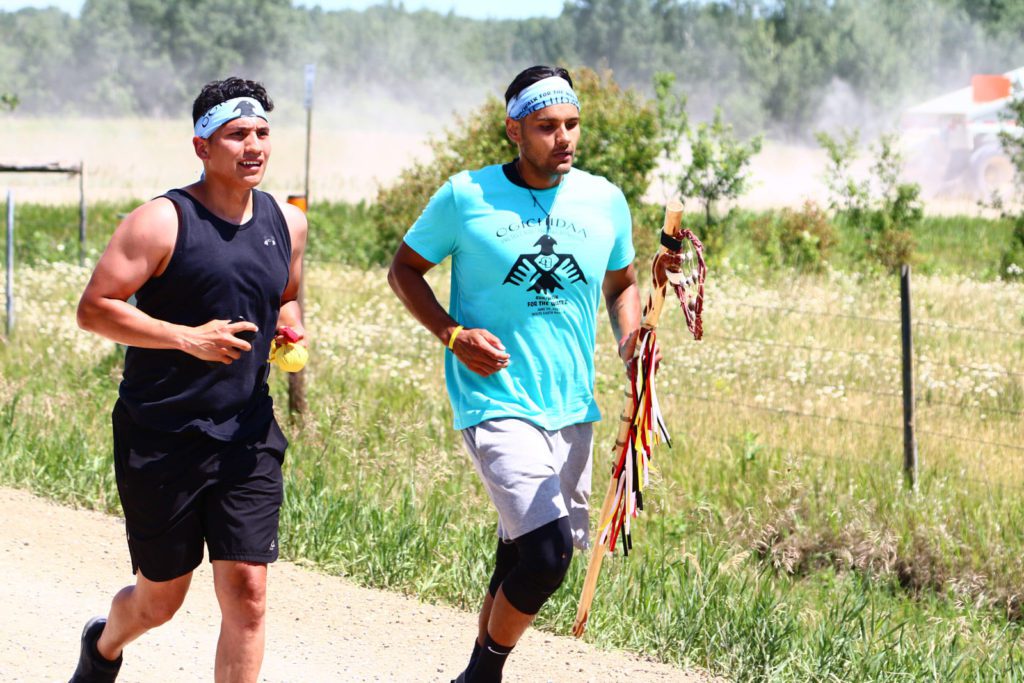 Meanwhile, at Rice Lake, the rice is trying to come up; it’s lying flat on the water in most places. Looking out from Big Bear Landing, you can see the rice coming in strong, and the swans on the lake, huge flocks of them. This is a sanctuary, not only for rice, but for millions of migratory birds. True to form, at Bunga Landing in Rice Lake, it’s standing on the river, the rice is returning.

A constant in our lives, the rice remains, awaiting the Anishinaabe, our prayers, our songs, and our gratitude.