We are proud to share this new piece by Native American land and water protector, environmentalist, economist, politician, and author — and now, hemp farmer — Winona LaDuke.

OSAGE, Minnesota – Our New Green Revolution springtime pre-party is over, but the growing season is just beginning. This fall, when we bring in the sheaves, they will be of hemp. Then we’ll have a harvest hoedown to follow up.

My Anishinaabe Agriculture Institute farm was the site of the pre-party in mid-May of 2021. My organization Winona’s Hemp anchored it. Oglala Lakota hemp farmer Alex White Plume co-hosted the educational event. 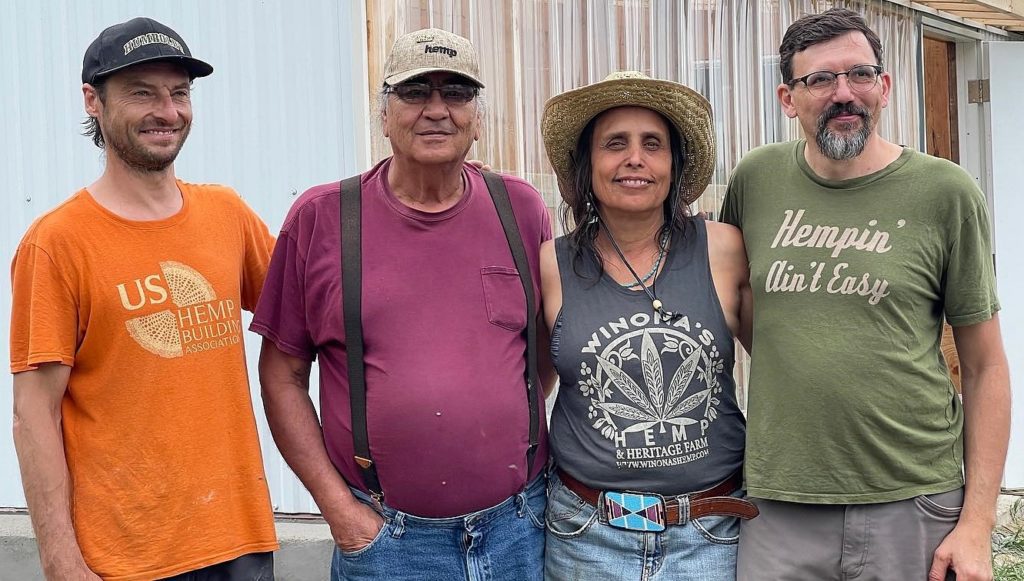 Taking part in the informal gathering were about 50 people from around the region. Workshops featured hemp in foods, textiles, paper, and construction materials.

The event underscored our vision of a New Green Revolution — a movement placing carbon-reducing appropriate technology at the center of economic change. Our crop of choice, hemp, stands to be a leading material in a transformation from fossil fuel dependence to renewable energy stability.

A hemp plot constitutes a carbon sink: Because the plant grows quickly (up to 12 feet in four months), it absorbs huge quantities of carbon, offsetting greenhouse gas emissions that cause destructive climate change.

More than that, the plant can replace carbon-intensive materials used in manufactured products ranging from plastics to concrete, creating a new carbon-friendly economy. That’s what we need to survive the decades ahead, and hemp can be a part of that New Green Revolution.

White Plume Hemp Co. has been motivational to many projects nationally, and a number of people were very happy to see him in northern Minnesota. Nicknamed the “Hemperer,” the pioneer of the hemp renaissance made a road trip to Osage from Pine Ridge Indian Reservation. 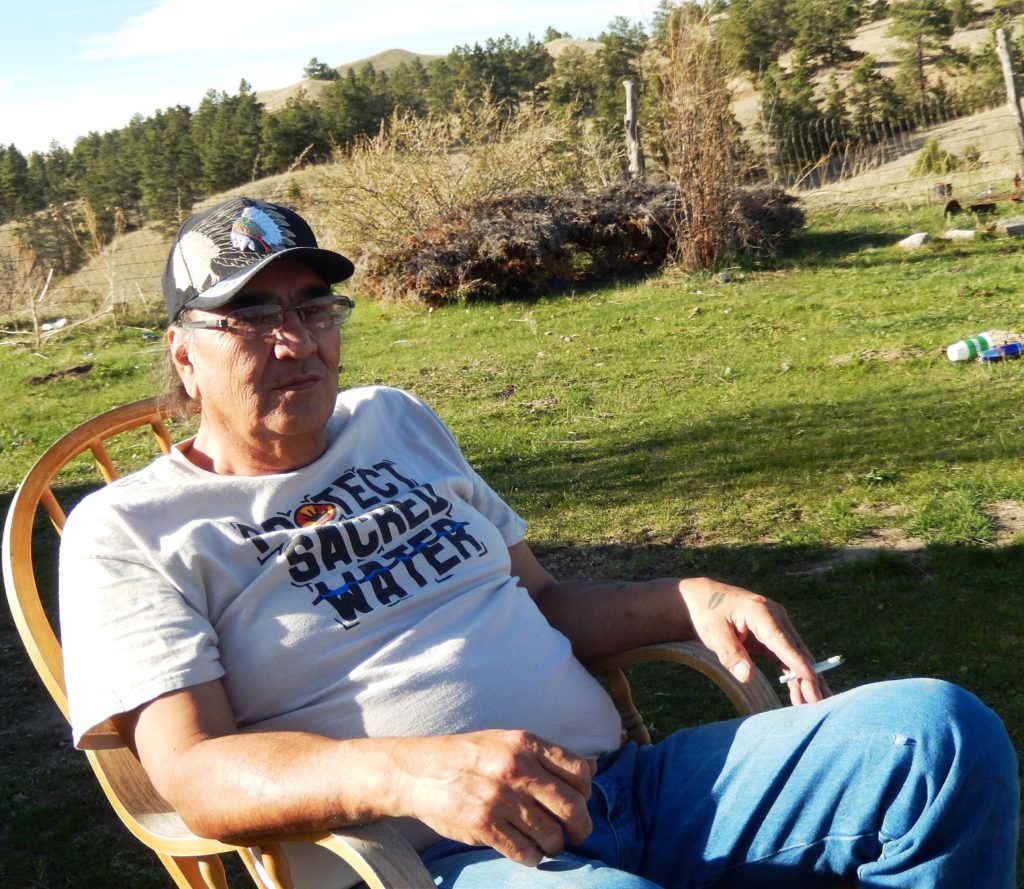 Alex White Plume discusses the history of the hemp renaissance at his home on the Pine Ridge Indian Reservation.
(Photo by Talli Nauman)

He travelled with his grandson Mato White Plume to see new Indigenous hemp projects showcased here. Many of them were inspired by his agricultural operation on sovereign tribal lands overlapping South Dakota. The White Plumes shared stories about the applications of hemp in community healing and ecological restoration, offering suggestions during various project demonstrations.

Having built a hempcrete house in rural Manderson, South Dakota, in the 1990s, Alex was pleased with the new hempcrete building projects here modeled on his endeavors of 30 years ago.  “I liked seeing the work of our relatives and how this plant is making a comeback,” he commented.

Workshop presenter Roman Vyskocil finished off a hempcrete project, putting some plaster on the outside of a greenhouse dug into a hill. “I’m really pleased with how it turned out,” he told participants.

Hempcrete is a valuable alternative to concrete in many forms of construction. It produces about four times the amount of fiber in a fraction of the time needed for processing an equivalent amount of wood.

This spring, the cost of framing lumber, oriented strand board, plywood, and other materials increased steeply, adding an average of $36,000 to the cost of constructing a home. That’s causing the building industry to take another look at the centuries of hemp building, and new innovations in hempcrete blocks, which add structural integrity as well as create a reduced-carbon house.

Belgium-based IsoHemp manufactures 1 million hemp blocks per year and will increase production to 5 million blocks per year with a new robotic factory to keep up with demand. In an email, its spokesperson, Charlotte De Bellefroid, assured HempBuild Magazine, “We have been working to decarbonize the construction sector for 10 years now and we remain 100 percent convinced that the hemp block has a crucial role to play.”

It will be “impossible” to halve U.S. greenhouse gas emissions by 2030, as advocated, “without rapid decarbonization of the building sector,” Alliance to Save Energy President Paula Glover said in a recent statement.

Hemp’s fast maturation time also makes it ideal for replacing tree fiber in paper, which means that forests can stay intact. This is very important to protect the natural world, animals and water, and also for jobs.

Many Minnesota paper mills are closing down or have been suffering during the times of the recession, pandemic, and reduced sustainable harvests.  Hemp provides for a premium paper product that can be reused several times more than wood fiber paper, while putting paychecks in employee pockets.

Hemp’s more glamorous cousin, cannabis sativa, is going through major expansion in production and sales to fill demand for products used in recreational and medical form. Meanwhile, industrial hemp has been sidelined. However, that’s about to change. That’s why Anishinaabe Agriculture is interested primarily in fiber hemp.

The 2018 U.S. Farm Bill amended the Agricultural Marketing Act of 1946, making growth and possession of hemp and hemp seeds legal again for the first time in a generation. 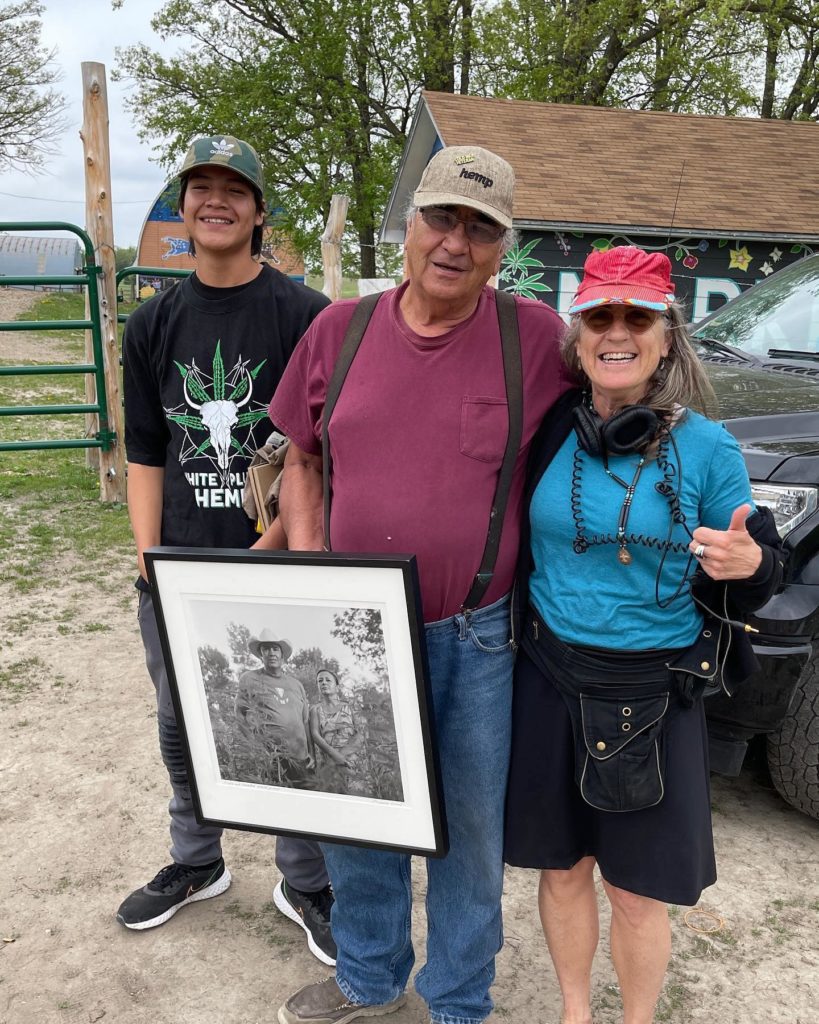 Alex White Plume traveled with his grandson Mato (left) from Pine Ridge Indian Reservation in South Dakota to the Anishinaabe Agriculture farm in Minnesota to see evidence of the New Green Revolution he has helped inspire. Kerry Pickett (right) gave Alex White Plume a photo she made of him with his wife Debra White Plume and their first hemp crop in 2001, before a federal raid destroyed the harvest. “Alex deserves 20 years of restitution” for the setback, she said.
(COURTESY / Pickett Pictures LLC)

The global Industrial Hemp Market was estimated at $5 billion in 2019 and is expected to reach $36 billion by 2026. It is expected to develop at a compound annual growth rate (CAGR) of 34 percent from 2019 to 2026. Anishinaabe Agriculture is interested in making sure that Native farmers have a place at the table, not on the menu.

Rebuilding an economy with hemp requires a lot of land. This is not a boutique business. Tribal nations have 20 million acres. Some of that can be hemp and cannabis (after food and buffalo, perhaps). That’s what a real just transition could support.

George D. Weiblen, the Science Director at the University of Minnesota’s Bell Museum, attended the hemp conference to meet White Plume and other Native farmers in the region.  White Plume is a hero to the museum director.

Weiblen has been working on hemp and cannabis varieties for the past decade and is keen on building new collaborative relationships with tribes. His department has helped the Sisseton Oyate with its hemp work, and colleagues are assisting Red Lake. Weiblen’s work recently was featured in High Times Magazine.

Indeed, Weiblen’s efforts represent a new era of collaboration between universities and Indigenous peoples. An integrated hemp and cannabis economy represents a multi-billion-dollar industry, which is a brand new industry — a brand new pie. That is a game changer. The hemp economy entails the need to learn together and work together.

Among topics addressed at the hemp event was how legalization of hemp and marijuana can be leveraged to deal a blow to discrimination. The War on Drugs has hit communities of color hard. Legalization can equal restorative justice. The American Civil Liberties Union found that marijuana “has been a key driver of mass criminalization in this country.” Every year, the lives of hundreds of thousands of people — the majority of whom are Black or Latinx — are impacted by marijuana arrests, it states.

Pushing back are initiatives like that of Karim Webb, who is working to secure dispensary licenses for people of color in Los Angeles. The most lucrative element of the industry is in the consumer sales, and people of color should benefit from the industry, Webb contends.

Winona LaDuke is an Anishinaabekwe (Ojibwe) member of the White Earth Nation. An economist from Harvard-Radcliffe and Antioch universities, she has written more than a half dozen books, the most recent To Be A Water Protector: The Rise of the Wiindigoo Slayers. A mother, grandmother, and orator she is the award-winning leader of the 33-year-old non-profit Honor the Earth. Her mission is to raise public environmental awareness, preserve land-based economies of scale, and enable grassroots efforts to promote Native American communities’ resilience in the face of climate change.

“There’s a new Revolution coming…and it’s green!” said the Los Angeles-based NSRGNTS in releasing this Art by @votanik, part of the Rezzie the Riveter series.