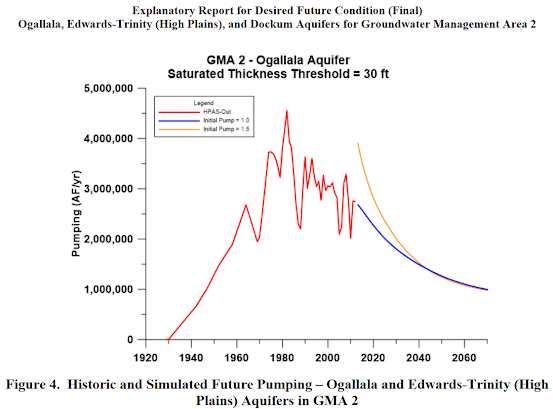 “Peak Water” is an idea that has been going in parallel with that of “Peak Oil.” Both assume that the production of limited resources, fossil fuels and fossil water, will follow a “bell shaped” curve. The production peak of liquid fuels may have been passed during the past few years. About “peak water” the situation is less clear, but the data indicate depletion problems in several areas of the world. Above, you see the historical and predicted water production from the Texas section of the Ogallala Aquifer. The data approximately follow a “Bell Shaped” (Hubbert) curve, typical of the depletion of non-renewable resources. In this case, the peak seems to have arrived in the late 1990.

Freshwater is a fundamental resource in our world, even more than crude oil. Without freshwater, it would be impossible to maintain the current agricultural production that manages to feed nearly 8 billion human beings. Most of the world’s agriculture, nowadays, is based on irrigation. It means that production depends on water that has been stored somewhere, naturally or artificially. And once you start depending on a limited stock of resources, you face a problem. Even though your resource may be renewable, if you exploit it faster than it renews itself, you will eventually run out of it. It is the phenomenon called “overexploitation”

There lies a truly nasty problem that we may be facing in the near future. A lot of water used for irrigation nowadays is “fossil water.” It means it has been stored underground by natural processes that may have been active only in the ancient past or that may be very slow, sometimes of the order of thousands or even hundreds of thousands of years. Underground water deposits are called “aquifers.” Some are fast replenished by natural phenomena, but in most cases, the rate of water withdrawal is much faster than that of the natural flow into the aquifer. That’s a recipe for disaster.

A classic case of an agricultural region that ran out of fossil water is that of Saudi Arabia. Starting with the 1980s, Saudi Arabian farmers started extracting water that had been lying underground for hundreds of thousands of years, from a time when the Arabian peninsula was green. That was true fossil water in the sense that the replenishment rate of the aquifers was practically zero. The result was a boom in agricultural production that quickly peaked in 1990 following an evident bell-shaped curve. The curve had a second cycle during the 2010s, but that changed little to the situation. Right now, Saudi Arabia’s agricultural production is reduced to practically zero and all the food must be imported.

Saudi Arabia’s freshwater production was a classic case of a “Hubbert cycle.” That is, water production followed the same kind of “bell-shaped” curve observed for crude oil and other mineral resources. The “Hubbert Theory” (the one that generated the concept of “Peak Oil”) is far from being perfect, but it is true that in most cases oil production cycles generate bell-shaped curves.

With aquifers, the core of the question is the same: you exploit a limited resource, you make a profit, you invest part of it in more exploitation. And that leads to depletion. The result is expected to be the same kind of curve.

It doesn’t matter that, in most cases, aquifers are partially replenished by natural phenomena. The curve will be the same, although it will not go to zero at the end of the cycle, but will return to the natural groundwater recharge rate. (source) 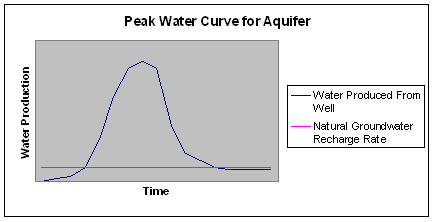 But that may be an optimistic estimate: with aquifers, there is always the issue of subsidence. It means that once you remove the water from porous rock, the rock becomes more compact and it won’t be filled again with water. It happens also with oil wells, but in that case, you don’t care: it is known that oil is a one-time resource. Some aquifers may be in the same category, and may be gone forever after that they have been emptied. As an additional effect of subsidence, your home may sink into a hole in the ground.

So, it is perfectly possible to run out of water, even though water is theoretically a renewable resource. During the first millennium CE, an entire civilization, that of the Garamantes of central Sahara, disappeared when their supply of fossil water ran out.

So, how do we stand today? Overall, one would tend to say that the situation is not so good (to say the least). Most of the aquifers in use are being overexploited. The table below, from Wikipedia, is impressive (again, to say the least).

If we continue in this way, it is unavoidable that sooner or later humans will run out of freshwater. It will be “peak water,” but when could it happen, exactly?

The problem with freshwater is that we don’t have the same wealth of data for water resources and consumption that we have for crude oil. There exist a large number of aquifers, most of them are exploited only locally and it is difficult to obtain reliable data on what is being done in all the regions of the world. Nevertheless, we have some rough estimates: the total amount of freshwater accessible to humans is estimated as some 200,000 km3. The total consumption of freshwater worldwide is estimated at around 1,000 km3 per year.

That these estimates are such round numbers tells us something about the uncertainty involved. But we can still say that aquifers contain huge amounts of water, about one thousand times more than the estimated volume of the world reserves of crude oil (about 200 km3). Even just the Ogallala aquifer in the central US is larger, estimated to have contained some 3,600 km3 of water before pumping started, in the 1950s. Then, we also consume huge amounts of water. We can compare again with crude oil, and we find that oil consumption (about 4 km3/year) is again dwarfed by water consumption that turns out to be about 250 times larger.

Unfortunately, these data are not enough for an estimate of when peak water could occur. Not only there are too many uncertainties involved, but the main point is that water is mostly a local resource, unlike oil, which is global. It means that the depletion cycle is spaced differently in different regions, depending on the rate of consumption to reserves. So, the fact that Saudi Arabia mostly ran out of water during the past decade had no significant effect on the world’s agricultural production. But if a truly major agricultural region, such as the Central Plains in the US, were to run out of water, then the situation would quickly become dire for all the regions in the world that depend on food imported from the US.

So, what’s happening in the US in terms of water production and consumption? The good news, here, is that consumption has been declining. That happened not because of water depletion, but because of the switch from coal to natural gas as the main energy source for electricity production. Natural gas plants are more efficient than coal-fired plants and the result is a reduced need for cooling water. (data below from USGS) 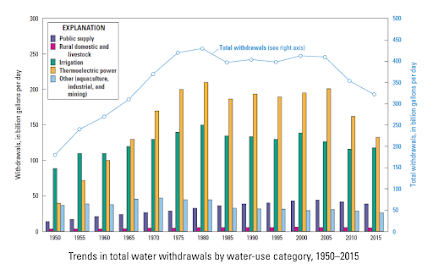 So, it is possible to reduce the consumption of water and that leaves plenty of it available for agriculture, but that doesn’t solve the problem. As you see in the figure, the second largest sector of water consumption is irrigation and that sector has been declining, too. Nobody can say for sure if (or when) the wells of the Ogallala aquifer will run dry, bur these data are worrisome.

Then, can we find new aquifers? Maybe, but even here the situation is not promising, to say the least. In 2013, the discovery of a new, large aquifer in Kenya was reported with much fanfare in the media. The aquifer was described as containing 250 billion cubic meters of water. Less than one-tenth of the Ogallala aquifer, but still a remarkable discovery.  Too bad that it was soon found that it was brackish water, not freshwater. So is life, you can’t have everything, you know?

Agriculture is an economic activity that lives on very small profit margins. You increase the cost of some agricultural inputs and a lot of things change and farmers go in the red. Water for irrigation is often subsidized and farmers can’t usually afford to pay it much more than $0.01 per cubic meter. In comparison, desalinated water may cost around one dollar per cubic meter, maybe a little less but not much. It is a factor of 10, at best. How much would an eggplant cultivated using desalinated water cost? More than most people would be able to afford.

As things stand, there is no way to use desalinated water in agriculture: we should go back to the dreams of “energy too cheap to meter” and that doesn’t seem to be closer today than it was in the 1950s, when it was proposed. Besides, as long as our energy supply comes mainly from fossil fuels, using a substantial fraction of it to produce the huge amounts of freshwater needed for irrigation would be an environmental disaster.

That doesn’t mean that desalinated water is a bad idea. Not at all and, in the future, it may cost much less than it costs right now. Just think of the possibility of producing freshwater using the excess energy that renewable energy plants generate at some moments during the day. It would be a smart way to store energy that otherwise would have to be wasted.

Smart, yes, but problematic in many ways. One is that at present we are still far away from having excess energy production from renewable plants sufficient to produce the huge amounts of water needed in agriculture. The second – probably worse – is that desalinated water is mostly produced from seawater, near the seashore. But agriculture is mainly performed inland, so you would need a gigantic infrastructure to transport enormous amounts of water where it is needed. Again, not an impossible task, but a steep barrier to overcome, and the costs would be gigantic, too.

In the end, the problem is not so much having sufficient energy to desalinate water. It is that irrigated agriculture is just not a good idea. In most cases, it is a trap that leads to the destruction of the fertile soil, something that the ancient Sumerians already experimented around 2,200 BC. It seems that the Sumerians depleted the aquifers they had been using for about one thousand years and couldn’t avoid the soil to become too salty to be cultivated.

Are we facing the same destiny? Maybe. But there are many ways open for a kind of agriculture that’s more respectful of the soil and that doesn’t need so much water as the current methods do. It is to be seen if we can change fast enough to avoid having to adapt the hard way, that is rebuilding after collapse. In this field, as in many others, the Seneca Cliff is awaiting.