Known as Tamaka Waste Win, or Good Earth Woman, she was 64 when she began her journey to the Spirit World on April 10. “A matriarch in the fight against the Dakota Access Pipeline,” the Standing Rock Youth Council called her.

“We will continue to stand,” the group posted on social media. Participants in the council — based at Standing Rock Sioux Nation Headquarters in Fort Yates, joined other Native pipeline fighters from the Cheyenne River Sioux Tribe, as well as from the Three Affiliated Tribes, in an April 9 rally for the pipeline’s shutdown.

Before leaving Fort Yates to caravan to the rally at the Mandan, Hidatsa & Arikara Nation tribal headquarters in New Town, N.D., participants paid a call on Tamaka Waste Win’s home.

“Prior to LaDonna’s passing, she heard the youth still standing and fighting in the protection of water rights outside her door — with a message of love and never giving up,” the council affirmed. “We must continue to fight and stand in her memory,” it said. 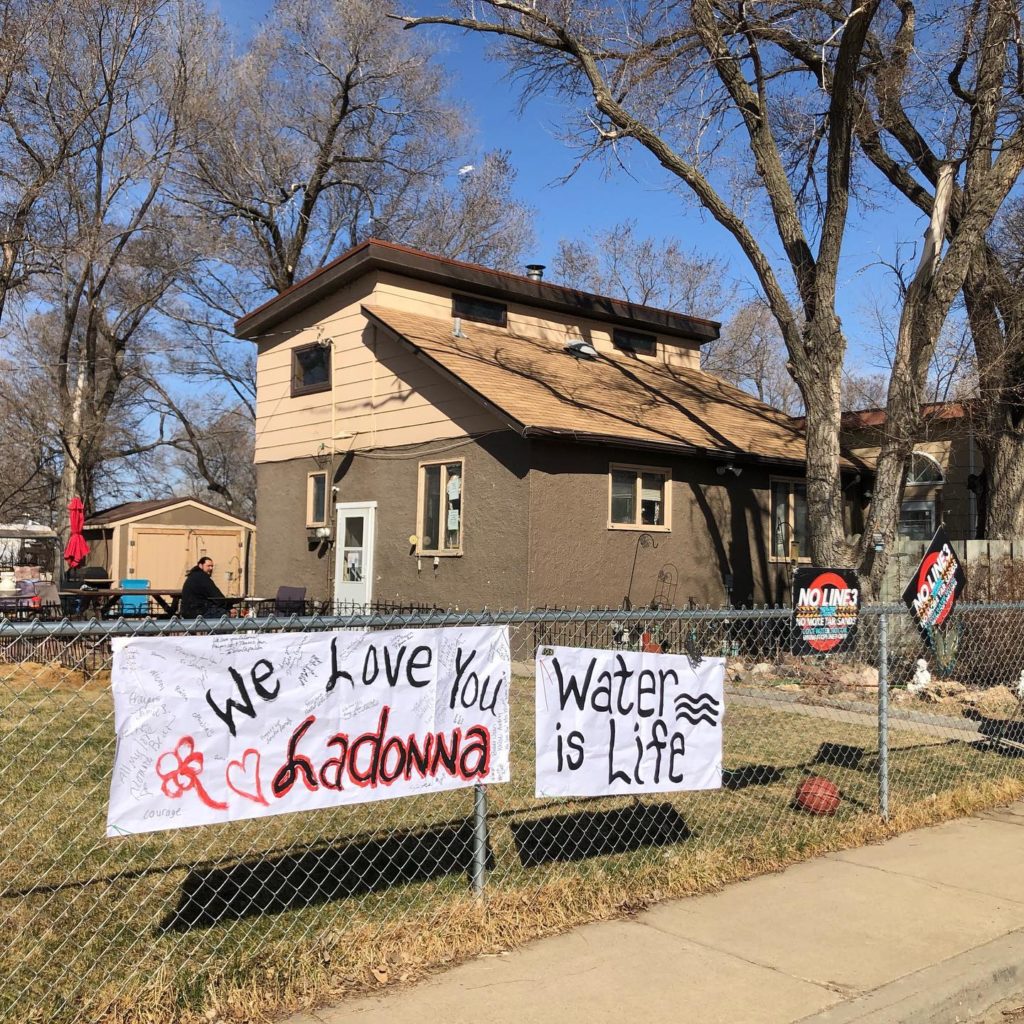 In that “beautiful moment” on April 8, a small dog greeted participants, jumping and barking in excitement within the fenced yard of her tree-sheltered Ft. Yates home. A contingent of about a dozen youth, some of whom wore ceremonial ribbon skirts, hung banners on the fence and chanted:

We love you LaDonna

The caravan to New Town carried on the widespread grassroots support initiated at Sacred Stone Camp for tribal governments’ lawsuits against the Dakota Access Pipeline’s permit. Some of the rally participants were fresh from a journey to Washington, D.C. to demand U.S. President Joe Biden stop, not only DAPL’s flow, but also Enbridge’s Mountain Valley, Line 3 and Line 5 construction.

At the Washington event, held April 1, participants stressed Biden’s fulfilled campaign promise to withdraw the Keystone XL Pipeline permit. They requested the president follow suit with the other pipelines, in the interest of climate justice. 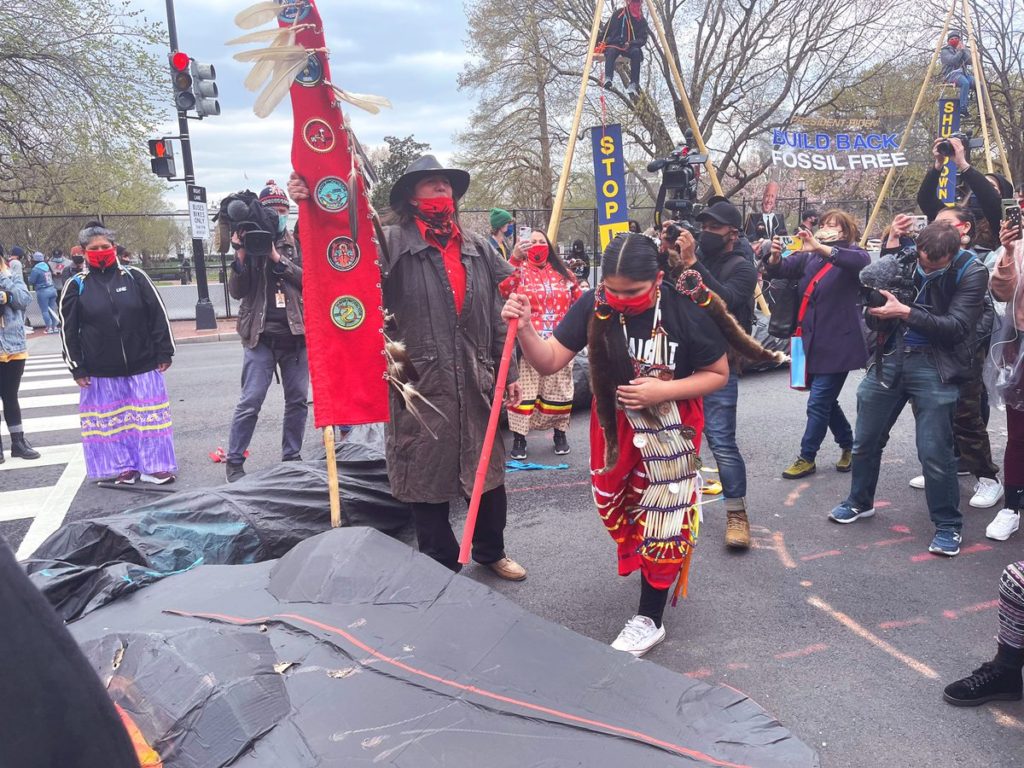 Love Hopkins, a pre-teen of White Shield, N.D., puts a finishing stab on the 300-foot effigy of a black snake April 1, as she returned with other tribal youth to the U.S, capital five years after their first relay run — to demand tribal consultation in petroleum pipeline and other megaproject permitting. COURTESY / Honor the Earth

Fox had addressed a March 23 letter to the U.S. Army Corps of Engineers, requesting “immediate consultation on the alternatives being considered regarding continuity of operations of the Dakota Access Pipeline” while the permit is under court-ordered review.

Fox notes in the letter that more than half of the oil produced on his Ft. Berthold Indian Reservation goes to market via DAPL, making the Three Affiliated Tribes “unique among other tribes in our region.”

Standing Rock Youth Council participant Love Hopkins — dressed in a green ribbon skirt and black t-shirt — addressed the MHA Tribal Business Council through Fox when he came outside of its chambers to meet the delegation.

“The Army Corp has been playing with First Nation peoples and we are tired of it,” she said. “The government needs to start taking us seriously. They do not have the right to make moves on our land and without our say.”

Fox agreed, but he pointed out that two thirds of the revenue generated by the leased oil sent through the pipeline accrues to individual tribal members. For that reason, he said, they have elected a business council that is “choosing to develop our trust resources.” He added, “We believe we can develop energy responsibly and still have a place to live.”

Cheyenne River Sioux tribal member Morgan Brings Plenty, 26, said, “I am here to change you guys’ minds. You need to understand that you are destroying our water. What are you going to do whenever that oil is in our water?” 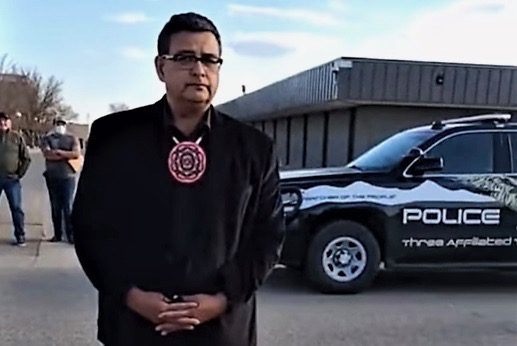 Fox responded, “I understand where you’re coming from. There is no doubt, the pipeline was wrongly placed there.” The DAPL crosses the Missouri River just upstream from Standing Rock’s drinking water intake from the Oahe Reservoir.

He recalled that he met with Standing Rock elected leadership during the 2016-2017 militarized police siege of the resistance camps that joined Sacred Stone. The MHA Nation acted in solidarity by sending part of its corn harvest to the thousands of campers on the banks of the Cannonball River, he noted.

MHA tribal member Kandi White said the reason some people want fracking is fear of the unknown options. Some 70 percent of the tribal members don’t receive any royalties. She called for community education and workshops. An organizer for Indigenous Environmental Network, she asked for the release of studies the tribe has undertaken on health and environment, as well as a promise to shift away from oil dependance to renewable sources of energy.

Fox admitted that negative impacts likely outweighed positive ones in the history of oil development on the tribes’ share of the petroleum rich Bakken Formation. Noting that petroleum supplies are finite, he said, “I don’t make promises, but I promise you we know that renewable is the way to go.”

What’s more, he said, “I will never ever change my position that water is more valuable than oil.” He also pledged to release requested documents.

Lisa DeVille, another citizen of the Mandan, Hidatsa & Arikara Nation, said she hails from Mandaree, the community on Ft. Berthold with most oil extraction. Her grassroots Protectors of Water and Earth Rights, POWER, predates the Fox Administration, advocating since 2010 to protect water, land, and air. She thanked Standing Rock youth for joining in.  “No pipeline is safe,” she said.

The Standing Rock youth returned home to the news that Brave Bull Allard’s funeral would be held within a week. “Sending our thoughts and prayers to the family of LaDonna Tamakawastewin Allard,” the youth council said. 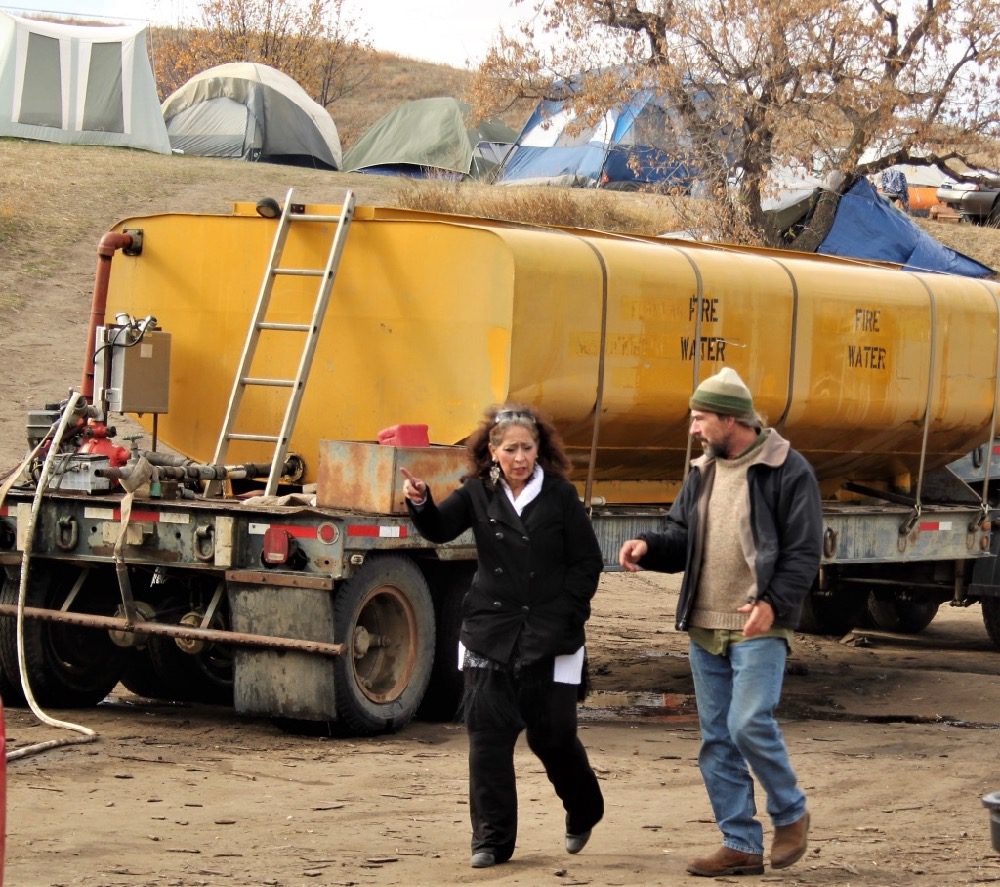 Motorcycle and mounted horse escorts confirmed they would join the ceremonies honoring her. DaWise-Perry Funeral Services took charge of arrangements and published an obituary. The Fort Yates Youth Activity Center was the site of the scheduled wake. Anyone who wanting to “help out” could deliver blankets, star quilts or food to 202 Main St., or P.O. Box 670, Fort Yates, N.D. 58538, her son Freedom McLaughlin said.

“We are grateful for the outpouring of love and support, care and concern, for our mother, teacher, sister, and friend Ladonna Brave Bull Allard,” he posted on the Sacred Stone Camp social media channel. “She lived life courageously and humbly as she pointed towards new possibilities through her way of life and commitment to the land.”

Pictured on the banks of the Missouri River outside Three Affiliated Tribes headquarters, Native youth rallied for the Dakota Access Pipeline’s shutdown, vowing, “We will continue to stand.”
CREDIT COURTESY / Morgan Brings Plenty

This story was written with the generous support of The One Foundation.