It is becoming clear that the future of the planet is red and green. It is equally clear that Mexico’s situation[1] is neither exclusive nor unique, but rather replicates what is happening on a global scale, where the citizens of the world take on diverse forces in order to reduce, stop or suppress the double exploitation that a minority of minorities is imposing on the work of humans and of nature. The enormous ignorance prevailing among leaders and theorists of Mexican emancipation about what is taking place in the rest of the world, limits and exhibits them. It is not only about keeping in mind the social and environmental struggles of Latin America, but of many other regions.

Today, probably the most advanced emancipatory process in the world is the one presented by the Kurdish people. It is a stateless confederate society of ecological and feminist inspiration that exists in a wide territory of Turkey, Iraq, Iran and Syria. Kurdistan, with 26 million inhabitants, exists largely because of the leadership and thought of Abdulah Ocalan. Imprisoned for 10 years by the Turkish government, his works illuminate the advanced and rigorous nature of his approaches and the quality of his reading matter[2].

In Mexico, the “emancipators” tend to ignore or minimize the role of science. To be clear, they don’t ignore techno-science, which is specialized, reductionist and at the service of capital; rather, they ignore a science committed to society and to nature. But one example of the latter is Extinction Rebellion [XR], a peaceful civil resistance movement that was born in England in 2019 with the full support of 100 scientists; today XR has a presence in 80 cities in 33 countries. Or the agroecological revolution in Latin America, which mobilizes millions of small producers from Cuba to Brazil and draws on the work of thousands of scientists and technicians. Or that of the new eco-technologies that are implementing energy designs at the scale of homes, communities and municipalities, which is a very different path from the one imposed by wind and solar corporations all over the world (including Mexico). Or that of the Cities in Transition (Transition Towns) that seek to live without petroleum, or finally the ICCA Consortium that brings together 160 organizations of indigenous peoples and local communities and that build “territories of life” for defending biodiversity and culture.

Humanity is moving forward because there is more information, knowledge, communication and awareness. It is advancing despite the ominous combination of the Covid-19 pandemic, climate change, the possibility of nuclear war, and the resurgence of rigid, inflexible and sectarian thinking. Contrary to the dogmatic insistence of intellectuals, the advances do not belong to any ideology, nor do they bear any brand. The advances take different configurations and follow diverse routes, as does the water in its eternal movement toward the sea. In each situation, the streams remain isolated or they coalesce to form robust rivers and ultimately huge watersheds. The advancement of humanity is polychromatic like the wiphala, the flag of the Andean civilization[3].

There is no doubt that in Mexico we are not facing a government of the “left”, but a hybrid government, where emancipatory projects coexist with projects that continue and even increase the neoliberal modality (China is this modality’s most successful case). After two years, it is clear that the 4T[1] project reproduces in good measure what happened with the so-called “progressive governments” of Latin America (although all look with great hope to the second cycle of Bolivia). This recognition allows not only accepting the existing contradictions and chiaroscuro, but identifying the forces that are sordidly or explicitly permanently confronted within the State. For the social forces that come from a decades-long tradition and that continue to struggle, resist and advance, this recognition allows for orchestrating strategic alliances and overcoming the radical positions of a stubborn and visceral left, anchored like a rusty ship in the ideologies of the 19th century. There is, for example, no major difference between the positions of the EZLN[4] and those of FRENA[5]; both could convene joint events or sign the same manifestos, since their hepatic speeches, full of fantasies and slander, are well-matched.

In this perspective, what must be assessed is how much the 4T government is making its mark by advancing the forces of global emancipation, the forces of those carrying out a great war for the survival of the human species and the rest of the living world. On whether or not it is moving forward to cool, not warm, the planet; to empower not impoverish the capacities for self-management, self-government and self-defense; to strengthen the defense of human values and those of nature in a process that is slower and more distant than we imagined, but that despite everything continues to advance.

[1] The 4T or Fourth Transformation | Mexico President Andrés Manuel López Obrador [aka AMLO] refers to his election as the Fourth Transformation of Mexico, preceded by the War for Independence from Spain (1810-1821); the Reform Period led by President Benito Juárez (1857-72, interrupted by two civil wars); and the Mexican Revolution (1910-1917); hence, the 4T government. See also Mexico | Pandemic, Science and Politics: A Defense of the ‘4T’, Victor M. Toledo, La Jornada, May 21, 2020.

[3] The seven colors of the Andean Wiphala reflect those of the rainbow. The significance and meaning of each color are [Wikipedia]: 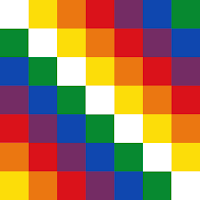 [4] EZLN [Zapatista Army of National Liberation, aka Zapatistas] is a far-left political and militant group that controls a substantial amount of territory in Chiapas, Mexico’s southernmost state.

[5] FRENA [acronym for National Front Against AMLO] is a social movement organized by business people calling for the resignation of President Andrés Manuel López Obrador [AMLO]. It is worth noting that frena is the Spanish word for brake,slow down.