Preparedness and resilience have always been an interest to the organizing team of Transition Longfellow, the group I cofounded in south Minneapolis (Minn.) in 2010. We hosted community movie nights and book groups, and brought in speakers to talk about climate change and many other Transition topics. These activities were well-advertised, and we had good visibility in our neighborhood of 20,000 people.

That visibility paid off when in 2016 the City of Minneapolis was chosen by the Rockefeller Foundation to be part of its 100 Resilient Cities project. They were looking for community input into their climate planning process and they asked our neighborhood association for help. The neighborhood association asked if we would partner with the city health department on their project, for which we would be paid $500. Of course we would!

I worked with the executive director of the neighborhood next to ours to define what our event would look like, and to recruit participants. The city wanted to ensure that they were reaching a truly representative group of residents so they gave us very specific instructions about who to recruit to our dinner workshop held in the community room at a local restaurant. We needed to find 15 people who matched our community demographics by race, age, income, education, immigration status, work status, and disability status. It took us weeks, but we were able to recruit our 15 diverse participants. Some were active in Transition Longfellow and some were not.

Participant knowledge of climate change ranged from “I know a lot,” to “If climate change was real, the city would have put a flyer on my door telling me about it. They haven’t, so it’s not.”

Our evening program began with a screening of parts of Minnesota Stories in a Changing Climate, a television program created by the MN Dept of Health and our local public television station. Then we broke into small groups and talked about the weather changes we had seen that concerned us the most, specific neighborhood vulnerabilities, community needs, and community assets.

Climate and Health Scenario: Storms and Flooding
It’s been an unusually rainy July and the ground is already saturated when the National Weather Service issues a flash flood warning telling residents to avoid travel. But many people aren’t paying attention. They don’t realize, when they get in their cars, how quickly the water can rise and cause damage to vehicles. The greenway, a common route for bikers in the neighborhood, is also prone to flooding.

Residents who have had water in their basements from previous downpours are feeling dread, and getting out the wet vac and towels. They hope the electricity doesn’t go out again, which would make the vacuum and sump pump useless. They can still smell the mold and must from previous water intrusion.

As the storm worsens, tree branches break and then entire trees begin to fall, taking the power lines down with them. Roadways are blocked. Water begins to bubble up from the storm sewer, and inches of rain fill the streets.
Q: What kind of safety and health outcomes do you want for your neighborhood in this scenario?

At the tables that had a Transition Longfellow member, the groups weren’t starting from scratch. Transition folks already had ideas that other community members expanded on. People were engaged, even excited. Most important, for the purposes of the city, they had clear ideas about what the community could do for itself – and what the city needed to do.

After hearing about the results of other community workshops, I became convinced that the way that local governments engage community members too often does not allow average people to make their best contribution. More of us need more information, delivered repeatedly over time, and in a way that focuses on practical solutions.

I went back to the Transition Longfellow core team with an idea for a longer, deeper dive into climate change, with a focus on adaptation. I recruited a team that included a therapist, a neighbor who is a scientist with the state health department (it was her first engagement with Transition Longfellow), a new volunteer who helped with logistics, and two young women whose great contribution was to push us to improve the look of our marketing. Looking back, I wish we had a graphic designer on the team.

The entire team met for two months in the winter of 2017 to develop a 6-part speaker series: When Climate Change Comes Home. Then, some volunteers dropped away, leaving only three of us to deliver the program. Fortunately, that was just enough to pull it off.

Our goal was to educate our community about exactly what climate impacts we would be experiencing – and when. We were armed with information from our state climatologist and our state health department. But we didn’t want to just talk science. We wanted to focus on real-world impacts. Everything needed to be practical, and every session needed to include solutions.

We created a two-part handout. On one half of the page, participants could write the actions they were going to take at home. On the other side, they wrote down ideas about what we needed to do as a community. They handed that side in at the end of each session. 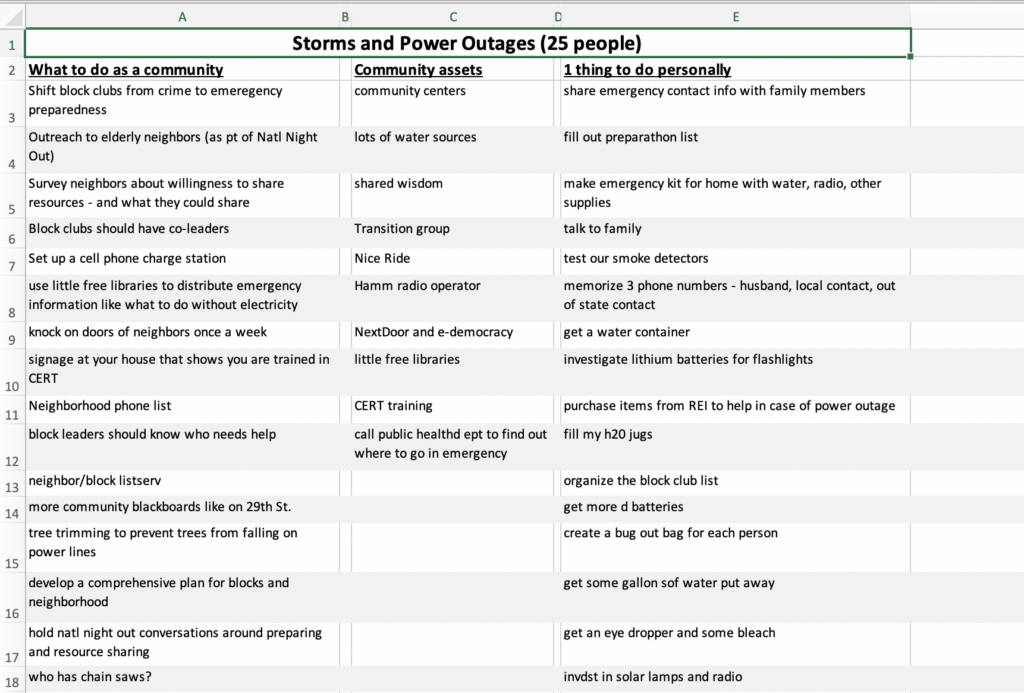 Transition Longfellow connected climate change to the things our neighbors love and care about the most – their children’s health, their chickens and vegetable gardens, their homes, and favorite businesses. While doing so, we were able to connect in meaningful ways with our city and state health departments and we had the pleasure of hearing from participants about actions they took in response to what they learned.

From Learning to Doing

Hearing about how to prepare for climate emergencies is one thing, doing the work is another. I partnered with Lisa Strong, a scientist with a deep personal interest in preparedness. We created an email series to help people finish their preparedness actions by taking just a few steps every week over the course of a year. We rolled it out in January 2018. 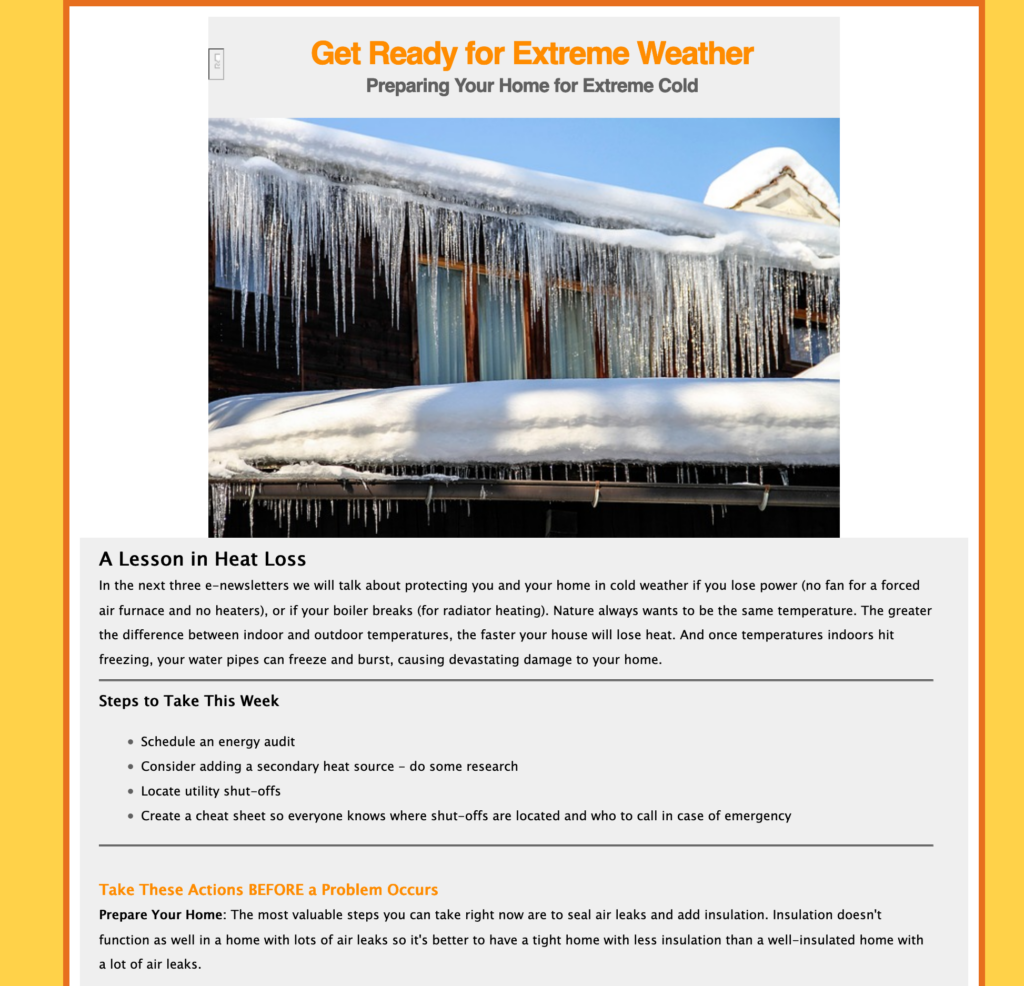 One week we’d ask people to identify how to shut off their electricity if their basement was flooding. Another week we’d advise parents to create a meet-up plan and to practice using the fire escape with their children. The series ended with advice on creating an emergency pantry … a little bit at a time. If people had done the actions in each email, they would have been prepared not only for weather-related disasters, but also for COVID-19.

One hundred and twenty people signed up for the initial email series, and it lives online at Solutions Focus – Preparedness Challenge on the Transition Longfellow website. When the COVID-19 pandemic hit in 2020, Lisa and I shared the email series again with friends to help them think about what should go in their emergency pantry.

If Your Group Wants to Do Work Like This

Climate preparedness and adaptation work is excellent for Transition groups to do for several reasons:

If we did it again, we would do a few things differently with the speaker series.

Your project certainly doesn’t have to be as big as this. But recognize the value of engaging with people repeatedly over time so they have time to do what needs to be done. There’s actually no rush. Just start with something. You could create something like the Transition Longfellow email series, adjusted for your community’s climate challenges, or you could start a group and use the Transition US “Ready Together” workbook. Transitioning Our Money to Invest Local Transition Streets Gets an Update!