Arian Horbovetz (Twitter: @Arianhorbovetz) is a longtime Strong Towns contributor in Rochester, New York. This post is republished from his blog, The Urban Phoenix. You can also check out the Urban Phoenix Podcast for more of Arian’s great work.

I wasn’t always a city kid. While I was born in Chicago, I was raised in a suburb about 12 miles south of Rochester, New York. Victor was a nice place to grow up…if you were privileged enough to be able to own a car and exist without a lot of public resources that is. Which for my mother and I was just barely.

We inhabited a cheap apartment in a house turned into three rental spaces. It was in terrible shape honestly, but it had what we needed and we got by, usually. Maple Ave was my address for most of my upbringing, a residential street that is also know as Route 444, connecting a series of smaller, more rural suburbs.

A typical ‘90s kid, my childhood included riding my bike around the neighborhood and playing football with friends that lived close by. As a homeschooler for most of my childhood, the Victor Free Library was a staple in my education.

Growing up, the library resided in the former Rochester and Eastern interurban trolly station right on my street. In just three or four minutes, I could bike down to this little historic gem and get what I needed to bolster my education.

The former Victor Free Library was located in an old inter-urban trolly station.

Mind you, even as a self-motivated learner, I didn’t fully appreciate how important a neighborhood library was at the time. Only today do I realize what a luxury it was to have such a valuable public resource so close to my childhood home.

The old rural passenger station-turned-library was, as you might expect for a small town, very cramped. The floor was uneven, the lighting was bad and the limited space meant the possibility for community programming was almost nonexistent. Still, I had very fond memories of the intimate space, the wonderful people and the hours I spent there.

When I was 15, the town opened a new library with several times the space for books and community activities. In every measurable way, the new library, which stands today, is far superior.

And yet I rarely visited it. Maybe it was because I was older and was a little more into sports, biking and hanging out with friends.

But as I look at it now, there were other reasons I never truly connected with my new library, despite the aforementioned superior amenities. For one, the new location wasn’t a piece of local history, but rather a shrine to prefabricated “design.” Gone was the magic marriage between the educational future of the community and an important piece of its historic infrastructure. The new library was built with little regard to aesthetics, personality or social connectivity.

The “new” Victor Free Library faces away from the closest street, fronting the massive parking lot instead.

The “new” library has a Main Street address, but it actually hugs the parallel side route, Adams Street, which it literally turns its back on. Instead, the entrance to the building opens into a vast parking lot off of the main drag through downtown Victor.

The new library was constructed to maximize parking and automobile convenience. Aesthetics and street connectivity took a backseat to vehicular access and square footage. The parking-front design signaled the suburban drive-up convenience as the new priority, casting aside the importance of its former walkable foundation.

While it was only a couple-tenths of a mile further away from where I lived, the new library seemed like it was out of reach. Instead of simply walking or biking down my residential street, I’d have to cross more busy roads and enter a sea of ugly parking to access my library. 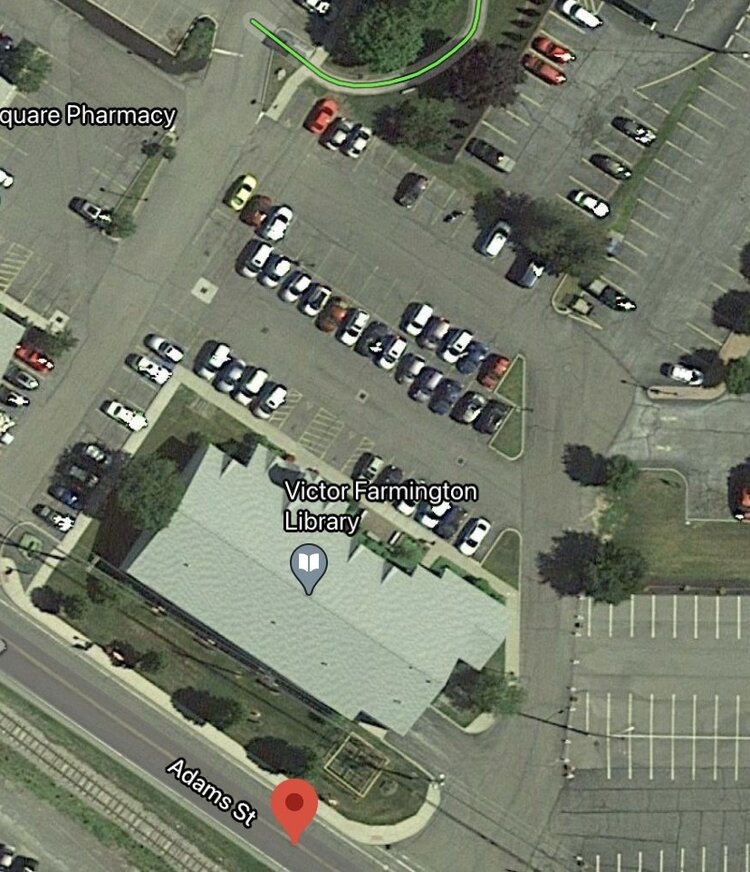 The old location was in the heart of a residential neighborhood. It was a place I could safely ride to on my Huffy bike when I was a kid. It didn’t matter how many parking spaces there were…my mom and I would always walk or bike there. And if the parking lot was full for patrons who chose to drive, the next-door Catholic Church provided overflow parking just a stone’s throw away.

Is the new Victor Free Library far superior to its old incarnation with regard to services and programs? Absolutely. But the construct lacks a fundamental appreciation for good community design. Even in a suburban, car-centric community, street-facing architecture is vital to the creation of a true connectivity with the immediate population. While Victor’s new library gained a space that continues to benefit the community, it lost the neighborhood connection that transcended any square-footage metric.

And looking back, I now understand why I never truly connected with the new library after it was built. Sterile, uninspiring space replaced historical structure. Car-forward design replaced the neighborhood feel. As much as the new space has undoubtedly played a pivotal role in the education of thousands of residents and community members, I’d give just about anything to walk into that cramped little library in the old train station once again.

This is a poignant reminder that expanding a community staple isn’t enough. We must consider the importance of how people connect with that staple as much as we consider the importance of square footage. How does that resource fit into the neighborhood setting, and how does the intimacy of that hyper-local relationship affect how we access all that the resource has to offer? Is the type of relationship we have with our public institutions just as important as the volume of content it provides?

These are the questions we must continue to ask with regard to community-based decision about libraries and other local public resources. Bigger is often better, but there are a number of variables that still need to be considered in concert with square footage. The maximization of community public space goes far beyond the space required. Only by reaching out to the community at large can we fully understand how a neighborhood connects with the key resources in its midst.