EAGLE BUTTE, South Dakota, USA – As Native grassroots water protectors carried on more than a decade of resistance to oil and gas pipeline construction during the first part of December, authorities across the Northern Great Plains responded in kind.

The seeds of Standing Rock have taken root and are growing all across the northern US, as water protectors from Montana to Minnesota and many points between raise the #LandBack flag and fight back against the Keystone XL, Enbridge Line 3 and many other infrastructure pipelines that they believe, if completed, would seal our fate in a world hurling toward climate catastrophe.

In Montana, the U.S. District Court received the latest in a string of lawsuits over the Keystone XL Pipeline.

Plaintiffs in the Dec. 4 filing ask the judge to “preliminarily and permanently enjoin all defendants, including TransCanada should it intervene, from initiating any activities in furtherance of the project that could result in any change or alteration of the physical environment.”

The suit follows after a similar Nov. 17 complaint in the same venue, in which the Rosebud Sioux Tribe and the Fort Belknap Indian Community. In announcing the filing Dec. 2, Native American Rights Fund Staff Attorney Matthew Campbell explained:

“Before we allow a foreign company to build another pipeline to haul dirty tar sands across any American soil, we should be taking a hard look at the possible impact on American land, water, health, and safety. For tribal lands, the treaties absolutely require this sort of review. In issuing the Keystone XL permit with shoddy and superficial analysis, the federal government not only didn’t do its job, it did not follow the law.”

Frazier fired off an official letter Dec. 3 to Cudmore, stating,

“It has been brought to my attention that you recently accosted, intimidated and stole property from tribal members peacefully assembled on what is referred to as Ash Creek Road on the Cheyenne River.”

“This trespass on tribal land and the unlawful exercise of your authority will result in your arrest if you continue to harass, intimidate or steal from tribal members.”— Cheyenne River Sioux Tribal Chair Harold Frazier

The letter responded to documentation presented by tribal members who set up an encampment Nov. 30 at the bridge over the Cheyenne River between Bridger and Philip where the Keystone XL tar-sands crude pipeline is slated to cross.

Cudmore and another officer are shown on video taking away the flags of the Cheyenne River Sioux Tribe and the #LandBack treaty rights movement that flew from the bridge.

Frazier ordered the tribal flag and any other stolen goods returned to their rightful owners immediately. 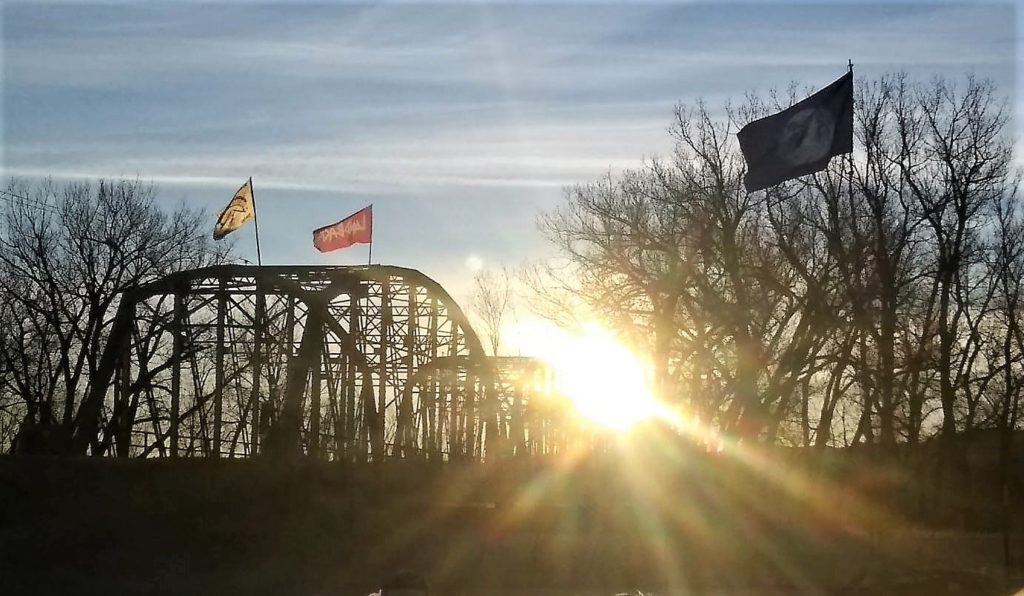 Flags of the Cheyenne River Sioux Tribe and the #LandBack treaty rights movement waved over the Cheyene River bridge where the pipeline is slated for construction.
Photo by 2KC Media

In Nebraska, the Plainview City Council denied a special use permit for a TC Energy Corp. KXL construction camp.

Further south on the KXL route, the Plainview City Council in Nebraska denied the Canadian hazardous infrastructure developer its amended application for a “contractor yard” for use by hundreds of temporary employees if the project is approved.

The Nov. 30 vote of 2-1 against the facility in the Pierce County municipality of 2,000 followed a Holt County Nebraska rejection of a similar request Oct. 29.

“Despite the coronavirus pandemic, and a promise from Joe Biden to stop the pipeline …, TransCanada is continuing to push forward with local permits it still needs in Nebraska for its proposed Keystone XL project,” Bold Nebraska non-profit pipeline fighter Tom Genung observed.

The Minnesota Chippewa Tribes petitioned Gov. Tim Walz to reverse the Public Utilities Commission approval of Enbridge Line 3 construction, as grassroots opponents mobilized to prevent the startup of drilling to lay the pipe across the Mississippi River.

“Utilize your executive authority to correct the wrongs and acknowledge that the Minnesota Public Utilities Commission failed the people of Minnesota” in greenlighting the line replacement by Canada’s Enbridge Inc.

“Approval of the project should be reversed, and public input and opinion should be taken seriously. Putting an end to Line 3, and any future project like it, will ensure that the next seven generations have clean water and unpolluted lands.”

“Indian people have lived along the lakes, rivers, and streams of Northern Minnesota since time immemorial,” it said. “There is no resource more important to our existence than clean water and unpolluted land, and Line 3 poses an existential threat to our well-being.” the tribal government stated in a Dec. 4 letter.— Letter from tribal government, Minnesota Chippewa Tribe, to Minnesota governor

Enbridge Inc. is responsible for the largest inland oil spill in U.S. history, which was a tar-sands crude pipeline leak that turned Michigan’s Kalamazoo River into a Superfund site, which is still under reclamation a decade later.

With another hearing on Line 3 that the U.S. Army Corps of Engineers slated for Dec. 7, grassroots opponents parked themselves at the location of its proposed Mississippi River crossing to block anticipated tree cutting and removal of cultural properties. 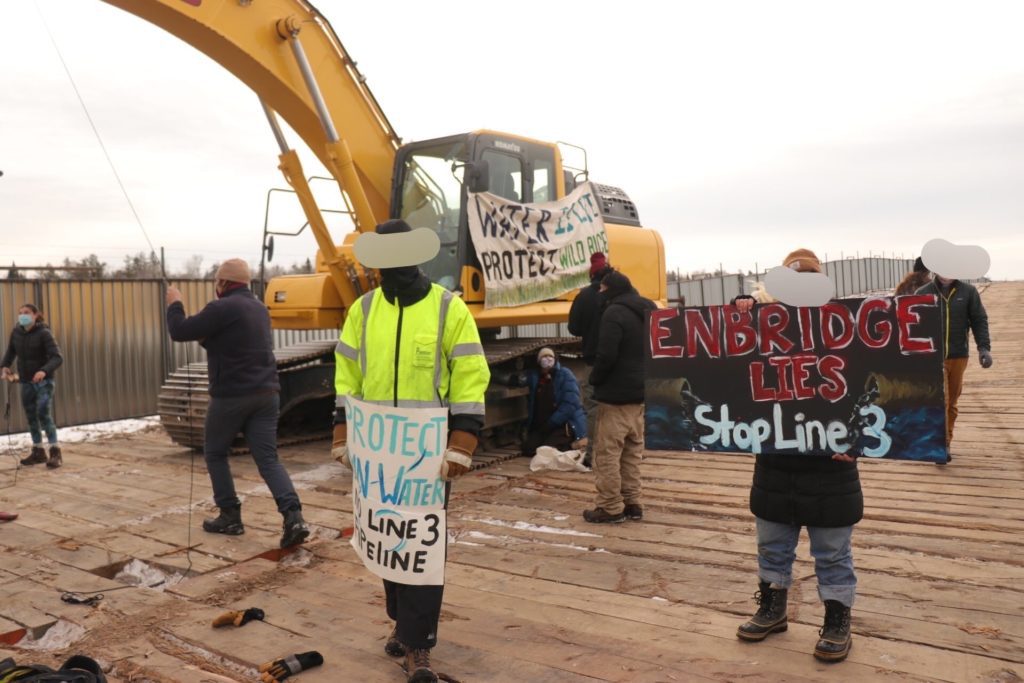 Honor the Earth and Giniw Collective stopped construction at the drill pad there on Dec. 4 by holding the highway and perching in the trees.

While Enbridge and the fossil fuel industry have prepared for the last tar-sands pipeline, our people have been working on a transition. That’s to solar, electric vehicles, reduced energy consumption and local foods — all lessons during a pandemic, and during a time of climate change.”— Winona LaDuke, Honor the Earth director

Her organizations joined others Dec. 9 in a “Line 3 Resistance: National Mobilization Call/Digital Rally”, calling for an “emergency stop” of construction and drawing attention to funders, financiers and insurers of Line 3, @BlackRock, @Chase and @LibertyMutual. 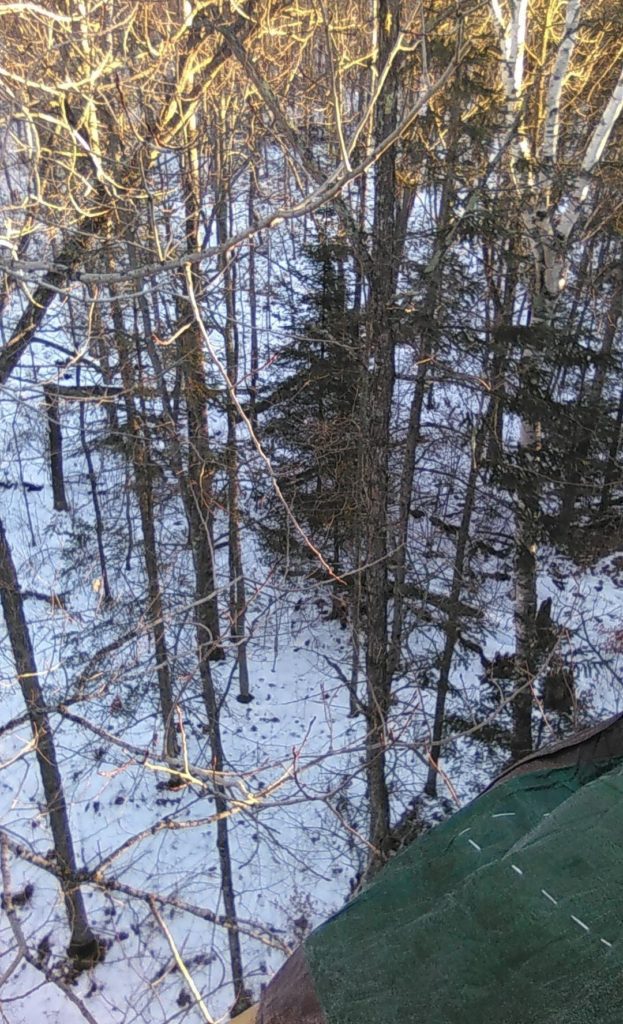 The view from a perch in the trees show where Line 3 would pass on its way to cross the Mississippi River. Photo by Giniw Collective

LaDuke noted that no new pipeline projects are getting approved. “Lawyers, resistance and fossil fuel economics during climate catastrophe are stopping projects,” she said.

Prayer camps pop up as pipelines go down

After an eight year battle, the Constitution Pipeline Project, intended to move natural gas into upstate New York, was cancelled recently. The Teck Mine, the largest new tar-sands mine proposed, also was cancelled in February.

In Lansing, Michigan, Gov. Gretchen Whitmer announced the imminent 2021 shutdown of Enbridge Line 5, which runs under the Great Lakes at the Straits of Mackinac.

Michigan Gov. Gretchen Whitmer revoked the 1953 easement that allows Enbridge Inc. to operate pipelines through the Straits of Mackinac, a narrow waterway that connects Lake Michigan and Lake Huron.

“Enbridge has routinely refused to take action to protect our Great Lakes and the millions of Americans who depend on them for clean drinking water and good jobs.”— Michigan Gov. Gretchen Whitmer

Back in Minnesota, the Red Lake and White Earth bands, as well as the Minnesota Department of Commerce and Honor the Earth, have appealed the state decisions that provided a Certificate of Need and the Route Permit for Line 3 replacement.

“We intend to have our day at the Minnesota Appeals Court,” LaDuke said, requesting support for legal expenses be donated.

“I am asking you to come see us, and bring warm clothes,” she said. “Come North. You can do it in a safe way. Come look at the pipe yards, the man camps and the river crossings that Governor Walz is permitting.”

The Cheyenne River encampment, tentatively dubbed the Roots Camp, on the other hand, is not prepared for an influx of campers, due to limited resources for preventing spread of the pandemic and treatment facilities. Donations are being requested. 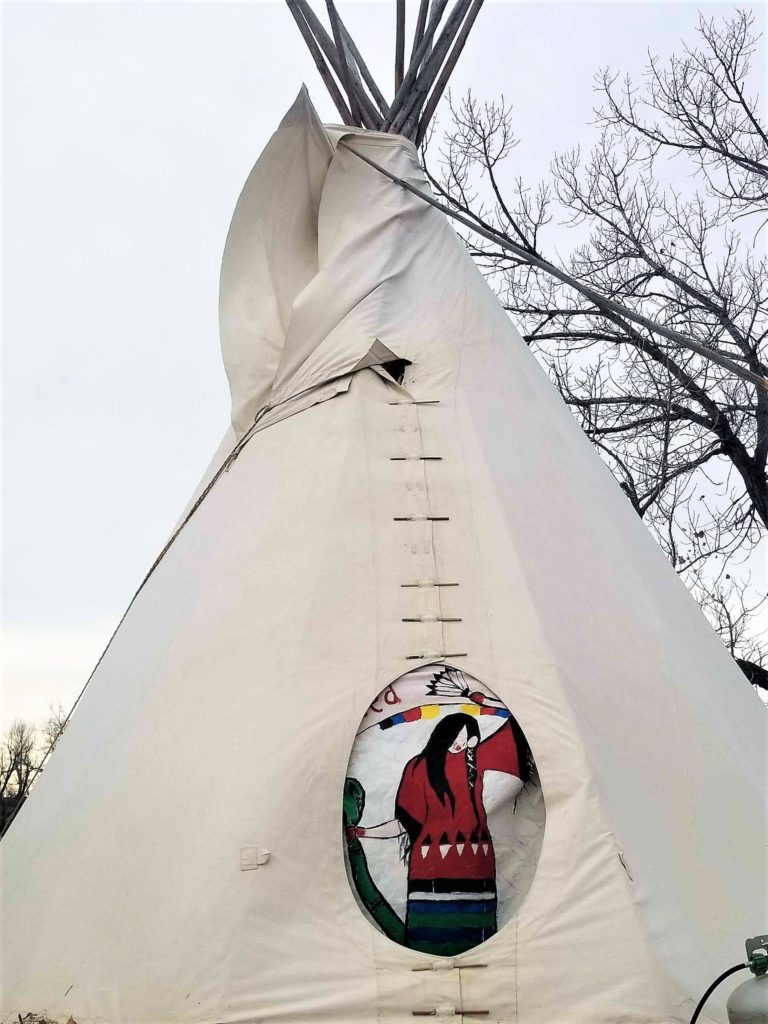 The first tipi up at the Roots Camp remains on the KXL Pipeline route to remind passers-by of water protecters opposition. Photo by 2KC Media

This story was reported and written with the generous support of the One Foundation.

Teaser photo credit: Ziebach County Sheriff’s officers use a knife to take down the flag of the #LandBack treaty rights movement that flew from the bridge over the Cheyenne River between Bridger and Philip where the Keystone XL tar-sands crude pipeline is slated to cross. Photo by 2KC Media