MINNEAPOLIS – Only eight months after the grand opening of their newly renovated building, staff at the Native youth center MIGIZI watched as fast-moving flames, spread during the May protests in Minneapolis, destroyed it. Now, six months after the fire, staff, students and volunteers are looking ahead to a new beginning in the form of a new facility. They’re also facing new challenges as cases of Covid-19 continue to surge.

The MIGIZI board approved the purchase of the new building and plans to finalize in the next couple weeks, according to Kelly Drummer, president of the non-profit that offers job training, academic tutoring and cultural connection to American Indian youth.

The bulk of the money for the new building came from an incredible wave of donations following the fire – more than 30,000 contributions totaling about $2 million.

If the purchase and renovations of the new building go according to plan, Drummer says they will move in next summer. While hopeful about this new future for MIGIZI, Drummer said the staff’s focus now is meeting the immediate needs of students, as the fire, coupled with the continued rise of Covid-19, has made 2020 an especially challenging year for them.

“For us, it’s been doubly difficult,” said Michelle Olson, director of Partnerships and Operations. “Nobody expected the loss of a building and a pandemic to coincide.”

Drummer said one of the biggest concerns for the staff now is the academic well-being of their students. Like so many students across the world, most in Minneapolis public schools are strictly distance learning. Drummer says this has had a negative impact on the academic success of some of the MIGIZI students.

“So, we’re asking ourselves, How do we support our students right now with whatever they need, whether it’s academic support, tutoring, mental health support,” Drummer said. “What is it they need to help motivate themselves to get their work done?”

Fostering academic success in students always has been a core part of MIGIZI’s programming, Drummer said. She said while they currently don’t have after-school tutoring programs running because of the pandemic, she’s hoping they will be able to start that again after Thanksgiving.

“That’s when a lot of the first-term grades transpire,” Drummer said. They are hoping to have small groups rotating in over the holidays. She said her first choice would be in-person learning, but that this option is looking less feasible.

“In the last few weeks, cases of Covid-19 across Minneapolis have been exploding,” said Olson. “We’ve been trying to respond to that in the best and most ethical way possible, by moving our programs entirely back online for this coming week. We know that means we’ll have to work harder in terms of engaging youth, but we absolutely know it’s the safest thing to do for them, our staff and the community.”

While she agrees the decision to socially distance is necessary, Drummer says she worries about all the ways this will affect students.

“I’m very concerned about the health and well-being of our young people, and their ability to motivate and be engaged again,” Drummer said. “Students are going further and further into their shell, and maybe are in homes that are not good learning environments, or environments in general.”

She said some students are living in two-bedroom apartments with six people, a space that can make it incredibly difficult to study.

“Most of the students we work with do not come from healthy environments,” said Drummer. “MIGIZI was an outlet for many of these students, who’d come after school because they didn’t want to go home after school. We fed them a good dinner, we got them the help they needed, someone paid attention to them, they were able to go to Ojibwe language class, or they just wanted to hang out. That, I think, more than anything, is what kids are missing.”

These practices of relational and cultural connections, while missed, may also be the very reasons MIGIZI can play a unique role in mitigating some of the negative impacts of the coronavirus in the community.

“MIGIZI has been in the community a long, long time, so there is some built-in trust,” Olson said. “People recognize MIGIZI is a place for American Indian youth, and so they just say ‘yes’. They will say yes even if they’re unsure about all the ways they’re being asked to show up in these online spaces. In the Native community, it’s the long-standing relationships that mean the most.” 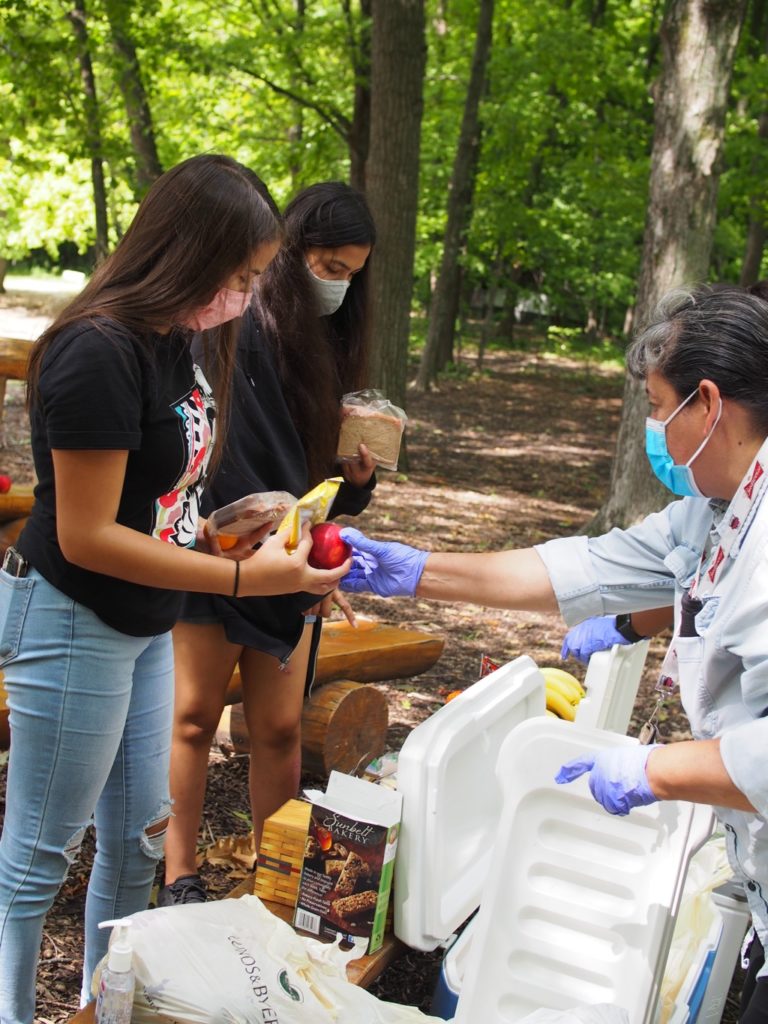 “What’s really bringing our young people to the table is the cultural piece, so that’s what we’ve been focusing on,” said Drummer. “One of our staff members works with a teacher who went on a buffalo hunt. He wants to provide buffalo for each family. We also want to provide food baskets with traditional food.”

For Thanksgiving and National Day of Mourning, staff from MIGIZI and South High’s All Nations program served over 100 gift baskets to their student community containing educational supplies, beading kits and food – bison included.

A different version of this story originally appeared in Native Sun News Today. Navajo Nation: From No. 1 in infections to No. 1 in vaccinations