After the furies of engaging with fantasy reviews of my book in my last post, let’s get back to something safe and uncontroversial – nuclear power. Here, I continue with my theme from this post about energy futures, particularly the notion that we can transition from our present high energy, high carbon civilization to a future high energy, low carbon one based around nuclear power.

On page 31 of my book, I present a version of Figure 1 below, which shows global primary energy consumption since 1965 by energy source. It suggests that there’s been no transition out of fossil fuels up to now. True, we’re using a lot more low-carbon energy now than we were in 1965 – over 1,900 million more tonnes of oil equivalent in 2018, in fact. But we’re also using a lot more fossil energy too – over 8,000 million tonnes more over the same period. So at the moment, low-carbon energy is merely adding to our growing total use of energy, rather than substituting for the fossil energy component of it. On pp.31-3 of my book I discuss why this is so.

But of course what’s happened up to now isn’t a secure guide to the future. It’s possible that we soon will begin transitioning to a high energy, low carbon civilization and those climbing fossil fuel quantities in Fig 1 will drop away.

To probe that possibility we need to address a few somewhat technical points. First, most sources of low carbon energy furnish us with electricity, so a high-energy, low-carbon society would have to be largely an electrically powered one. An advantage of low carbon electrical energy is that it’s efficient in its final use, whereas something like a diesel engine or a coal-powered turbine wastes a lot of energy as heat. Therefore, in order to retain the level of final energy usage implied by the fossil energy shown in Figure 1 while replacing it with low carbon electricity, it wouldn’t be necessary to match the levels of total fossil energy consumption shown in the figure, which exceed low carbon consumption by a factor of more than 5. In his paper that I mentioned in my earlier post, Tom Biegler estimates that a more appropriate factor for Australia is a (“conservative”) 2.4 – which could perhaps be generalized globally given that the proportion of electrical energy to total energy consumption is about the same in each case.

When I put together the version of Figure 1 above that appears on page 31 of the book, I hadn’t pondered this point as much as I probably should have done – but I don’t think it matters for the purposes of a retrospective/historical presentation. The graph shows as a matter of historical fact that low-carbon energy has added to rather than substituted for fossil energy consumption, and this is worth knowing. But if we try to project into the future it does matter, because – as stated above – we may not need to use as much low carbon electrical energy in the future as the fossil energy we use now in order to get the same work done.

I used the uncertain “may not” in the previous sentence because there’s another side to the coin. There are some industrial processes like fertiliser and steel manufacture that are less energy intensive when using fossil fuels than electricity. Creating the higher capacity global electrical infrastructure that would be necessary for a fully electrified global energy system, including the end products like electric cars, will also require an enormous upfront energy outlay, as Joe Clarkson pointed out under my earlier post. So exactly how this might play out is debatable.

Anyhow, Figure 2 shows the low carbon electricity (nuclear or renewables, but excluding hydro) that’s been generated year on year from 1965 to 2018, with three projections for how it will have to increase if the global energy economy is to abandon fossil fuels by 2050. 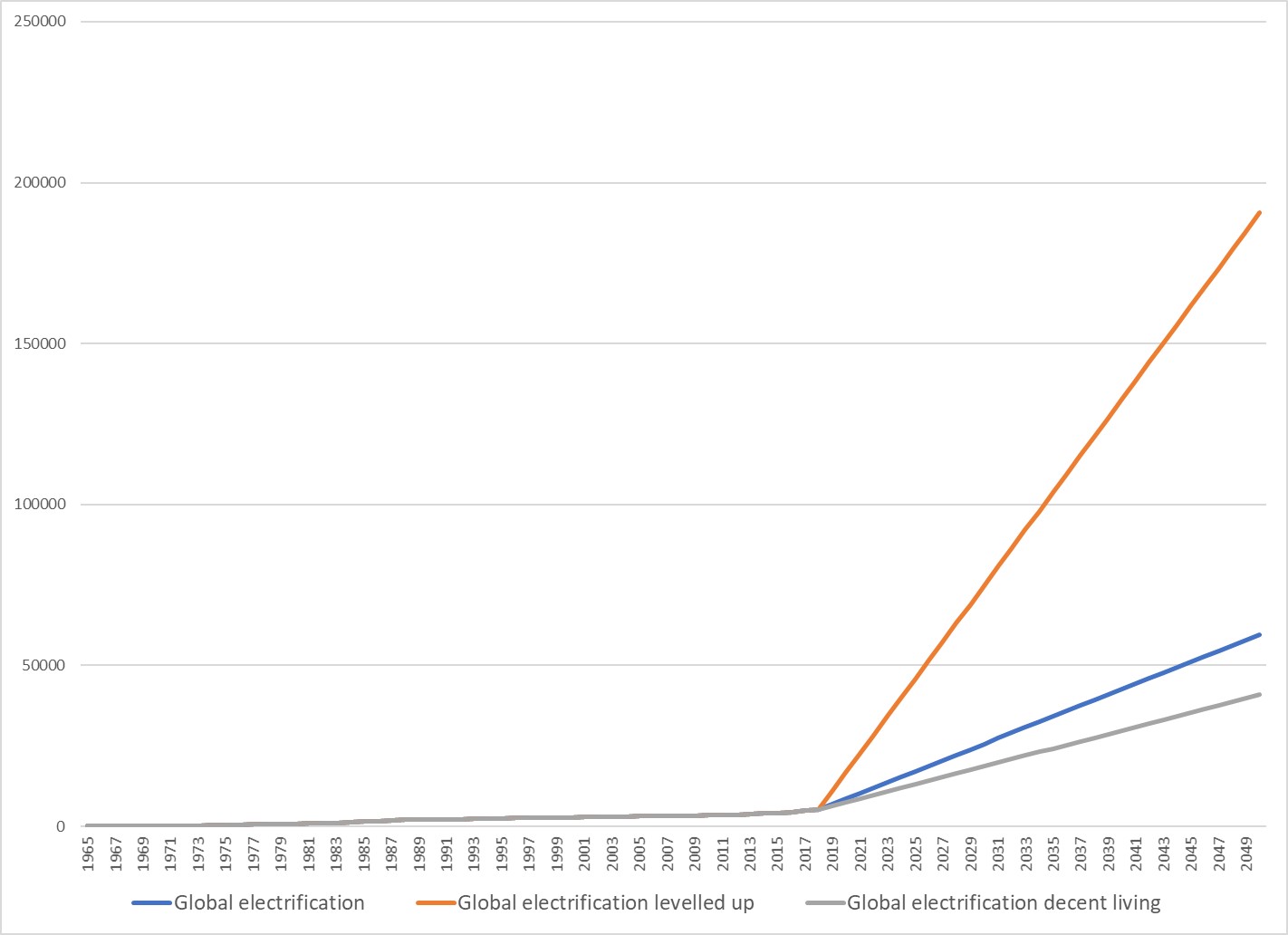 The blue line indicates the necessary increase if existing global final energy use turned exclusively to low carbon electricity, based on Dr Biegler’s conservative factor of 2.4, while ignoring the factors pushing energy use higher that I just mentioned – therefore underestimating the true challenge. But this leaves untouched the differences in energy use between richer and poorer countries, making this scenario implausible. Poorer countries are unlikely to invest massively in a low carbon energy transition without remedy to the gulf between rich and poor country levels of energy use – especially the energy-hungry poorer countries that are now the world’s industrial powerhouses, and that currently are heavily dependent upon fossil fuels.

The orange line adjusts for this by ‘levelling up’ to show the increased low carbon generation that would be required if every country in the world used energy at the same per capita level as Australia, on which Dr Biegler’s calculations are based – and why shouldn’t they?

Finally, the grey line shows the necessary increase if governments globally adopt the radical energy-cutting measures that a recent paper argued were feasible while retaining a decent life for citizens (though the paper professed uncertainty about how these cuts could be practically achieved).

Nobody can tell how the future will unfold, but my sense of things is that we will not see anything like the steep gradients in the blue and orange lines occurring in practice. The grey line is slightly more feasible, but is still a big leap – and would require rapid energy-cutting measures that are currently not occurring. And of course, for each passing year that new low-carbon generation falls behind the curve, the gradients just get steeper.

To my mind, the graph underscores a point made by Kevin Anderson: people have their silver bullet technologies of choice, but “you cannot build your way out with bits of shiny kit” – and that applies to both nuclear and renewable energy. So where does that leave us? Possibly with a more vernacular than literal interpretation of the phrase that it’s “time to go nuclear”. In other words, it’s time to accept that we need to drastically cut our energy usage in the rich countries, starting right now, and take our efforts to create a renewable economy up to a whole new level of urgency, throwing the kitchen sink (to mix my metaphors with another piece of high tech kit) at energy reduction. This would undoubtedly have to involve the richer countries helping the poorer ones to decarbonize, essentially by gifting them low carbon electricity capacity, which would also have the happy result of creating a more even global economic playing field.

It’s possible that’ll happen, but I can’t quite see it. It seems more likely that the pace of decarbonization will pick up a bit in the coming years, albeit with actual achievements failing to match spoken commitments. Probably, the worst case climate change scenarios for the century’s end will be avoided, accompanied by much thinktanking along the way about how a 3oC world really isn’t so bad – as seems to be the direction that the new look, more serious, post-Michael Shellenberger Breakthrough Institute is headed.

Then perhaps we reach a crunch point in the rich world – carbon taxes begin to bite, people have to hunker down more locally and grow more of their own food while welcoming newcomers from places where the hunkering hasn’t worked out, at the same time probably watching their tax dollars heading off in a desperate bid to reconcile the economic status quo with climate stability by building low carbon infrastructures in the poorer countries while seeing the likes of Jeff Bezos get ever richer, with economy-shredding climate shocks becoming ever more frequent. My hope is that they’ll find a way through that into a more equitable, more local, lower carbon world. But I couldn’t honestly say that it’s my expectation.

A further note on gender, families and households in a small farm future

From the IPCC to Just Stop Oil: my week of climate politics

A note on land value tax