It is increasingly difficult to deny that industrial civilization is entering a phase of terminal decline. All the evidence points in this direction, as summarized in this collection of images about the Anthropocene.

Actually, the industrial civilization is but the latest stage of the patriarchal civilization that emerged during the Agricultural Revolution. This latest stage started with the Industrial Revolution powered by fossil fuels, with the consequent great acceleration of population and consumption growth and the side effects of toxic pollution, resource depletion, and chaotic complexity of the global system.

In the encyclical Laudato Si’, Pope Francis deals with this global reality and observes that modern anthropocentrism has degenerated to the point that social cohesion and the very integrity of the planet are compromised. In the encyclical Fratelli Tutti, he concludes that the only remedy is a new culture of fraternity and social friendship of the kind shown by the Good Samaritan.

Pope Francis, a good and admirable man, is going as far as he can within the limits of his patriarchal institution. But it is precisely the ancient patriarchal culture, including biblical patriarchy, that constitutes the most formidable obstacle to attain the social renewal that he proposes; for patriarchy is intrinsically divisive, starting with artificial divisions in the gender dimension of human life, whence divisiveness mutates into sexism, racism, and all other ideologies that often make social friendship practically impossible.

In the Catholic Church, the dignity of the human person from conception to natural death is considered to be sacred; but the dignity of serving in the ministerial priesthood is still reserved to men alone. Similar aberrations continue to prevail in many other religious traditions, with ferocious culture wars ensuing in the process of dismantling patriarchal theologies that no longer pass the smell test.

From the beginning, human nature is relational:

(m)adam: Adam’s Rib Reframed, Lizzie Berne DeGear, 5 April 2020.
“Eve was made from Adam’s rib. Everybody knows that. But… does the Bible actually say it? In this delightful short film, Bible scholar Lizzie Berne DeGear teams up with animator Martha Mapes to breathe new life into an old story we thought we all knew.”

Note: This exegesis is fully consistent with the Theology of the Body in regard to the original embodied unity (natural somatic homogeneity) of man and woman. See also:
Humanity, Male and Female ~ Relational Complementarity in Consubstantial Unity

It is unfortunate that the gender dimension of human relations is entirely missing from both Laudato Si’ and Fratelli Tutti. Who can deny that gender relations are tightly coupled with the unavoidable issue of overpopulation, and with issues of human development, economic globalization, and environmental degradation?

The Seneca cliff looms ahead. For over fifty years now, scholars in the biophysical and human sciences have been warning us that industrial civilization is passing away. Pope Francis has issued two encyclicals, Laudato Si’ and Fratelli Tutti, that state the predicament and open new horizons. There are no technological fixes. We should not allow demagogues and charlatans to distract us with false promises. It is, fundamentally, a cultural issue. “All of this shows the urgent need for us to move forward in a bold cultural revolution” (LS # 114). We better stop messing around with abstractions and false hopes, and get moving.

Patriarchal religions, by fostering a culture of toxic masculinity and subordination of everything feminine — including Mother Nature, the planet that is our common home — exacerbate the current predicament of human civilization. There is no way in the world that the worldwide social and ecological crisis brought about by globalization and unbridled materialism can be resolved under political and religious institutions that enshrine patriarchal gender ideology. Solidarity and patriarchy are mutually exclusive. Patriarchal economies are not sustainable. The patriarchal mindset of “divide and conquer” in driving us toward a Seneca cliff. Religious institutions are complicit as long as they refuse to admit women to roles of authoritative religious service. One Sacred Community by Mary Southard, CSJ. In the Christian tradition, the mystery of the redemption refers to deliverance from patriarchy and other consequences of sin. It means a complete healing of human nature that enables people to seek integral human development, individually and collectively, in harmony with the human habitat. 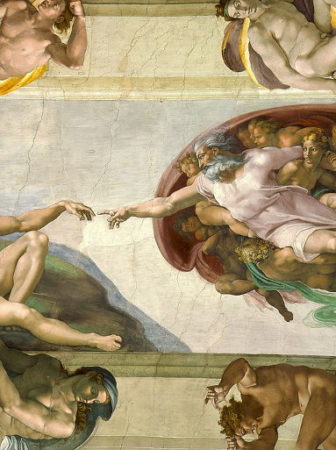