RAPID CITY, South Dakota — When Native American Natural Foods launched Tanka Bars and Tanka Bites in 2007 it had a mission:  “To heal the people and our Mother Earth by building a company that innovates real food products based on the traditional values of Native American respect for all living things by living in balance with mind, body and spirit.”

The Oglala Lakota social entrepreneur from the Pine Ridge Indian Reservation had a tale of hope to tell. Her struggling majority-Indian-owned business, which invented the first bison-and-berry snack bars in the United States, has a new partner to help native producers compete in the marketplace.

Its recipes are based on the traditional food wasna, a pounded buffalo jerky and chokecherry patty, dried and historically carried on travels in parfleche bags. Like its prototype, the modern combination of buffalo with dried cranberries, apples and orange peel uses no artificial preservatives, dyes or fillers.

However, a number of other startups soon began producing versions of the meat-and-fruit snack, as well as appropriating the narrative about the historical importance of bison to native culture.

Before long, all but Native American Natural Foods had been purchased by larger companies. One in particular, Epic Provisions, garnered mega-financing in a multi-million-dollar 2016 buyout from the General Mills food conglomerate, to pull ahead in the national rivalry for shelf space with its Epic Bars and Epic Bites. Meanwhile, Tanka profits flatlined.

In December of 2018, Hunter sounded an alarm. “Tanka Bar is in danger of being kicked out of Whole Foods,” she posted in social media. “I’m asking all of my friends, family and their friends to help us this week,” she said. “PLEASE stop by a Whole Foods before the 10th and buy some Tanka products. We need our numbers up and you would really be helping us.”

Enter Jeff Triptician, then Niman Ranch general manager. As the story goes, Triptician read a magazine article about Tanka’s predicament, jumped in his car and drove from Denver to meet with Hunter and Native American Natural Foods co-founder Mark Tilsen, Sr. “Trip,” as he became affectionately known, wanted to know how his company could help.

“A great injustice was done to the Lakota people and anything we can do to help is part of our mission to revitalize rural communities, especially for America’s original farmers and ranchers,” Triptician recognized. 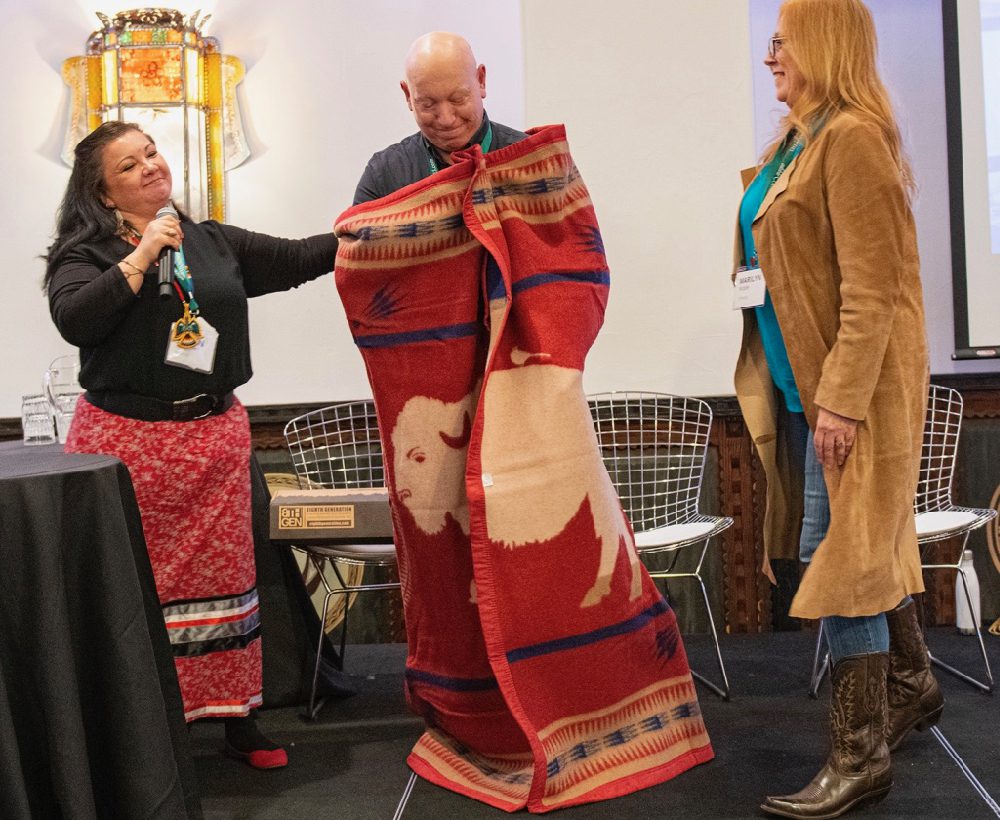 As it turned out, Niman Ranch was every bit as mission-driven as Native American Natural Foods, resulting in a courtship that has lasted two years.

“It has always been a part of Niman Ranch’s foundation to support rural farming communities and we understand many of the hurdles,” Niman Ranch General Manager Chris Oliviero said during the announcement of the partnership at an Edible Institute meeting in Santa Fe, New Mexico. “We felt we could align and support the Tanka mission.”

Triptician is now president of Perdue Premium Meat, and Tanka’s people believe they are finally in a good position to get on about their business.

That business prioritizes tipping the scales in favor of Native American producers.

The partnership is strictly a mentoring agreement, with no money changing hands. It aims to help Tanka’s business stay independent and boost the local food market by building a Tanka Regenerative Agriculture Co-op (TRAC) for tribal members to receive guaranteed meat sales contracts with both companies.

TRAC is the next step for tribal livestock growers, once they become qualified with the support of technical advice and grants from the Tanka Fund.

The fund has procured grants of close to $100,000 for native reservation buffalo projects, responding to infrastructure needs, including water wells, land and stipends.

The fund also uses donations it receives to educate the public about the benefits of buffalo restoration in creating healthy lands, diets and economies, as well as in water conservation, promoting biodiversity and reducing greenhouse gas pollution.

Its goal is to return 1 million acres of native lands to buffalo, to promote prosperity and wellness in reservation communities.

Charles “Bamm” Brewer is one of only a handful of Native American buffalo ranchers who has been able to receive a grant and take part in the tribal food sovereignty movement. However, he says, he envisions more of his neighbors becoming involved due to the new partnership. 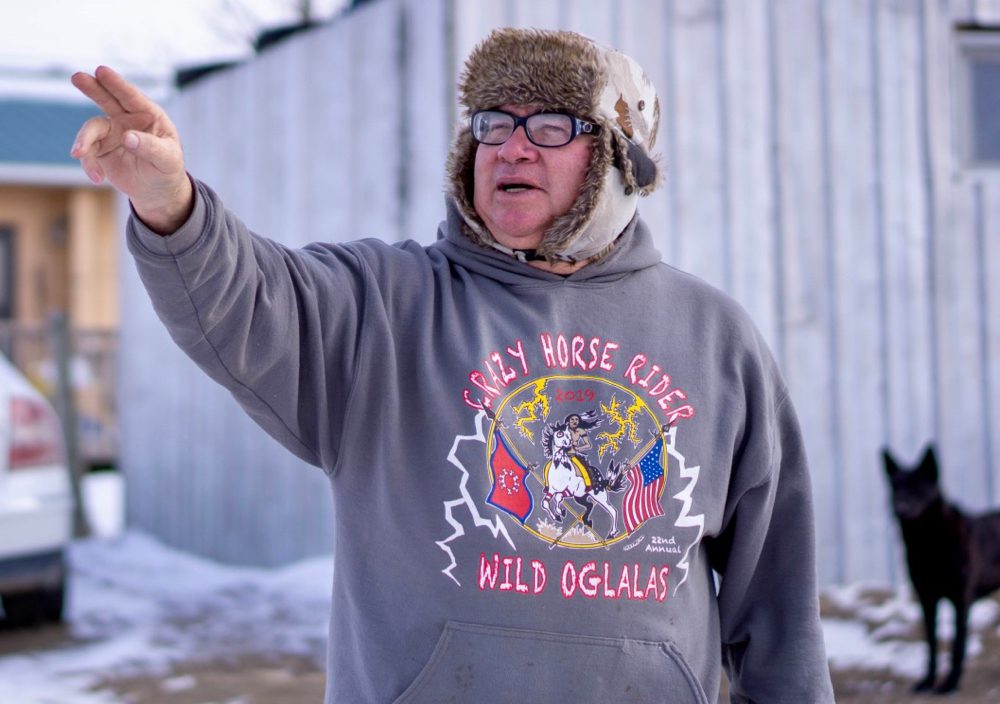 “I know it will help out tribal members who are interested in raising a herd of buffalo, because the tribe can’t do it on their own,” Brewer said in a telephone interview. “It’s going to take individual families” for the reservation to feed itself.

Brewer switched from cattle to bison husbandry some 25 years ago, when the Oglala Sioux Tribe began helping members start buffalo ranches by providing stock from its herd.

At the time, they could sell a heifer calf for $2,000, and so about a half-dozen families got involved. But merely five years later, the market crashed, and they could get only $200 for it. Most of them abandoned the cause.

The tribal government still will provide calves to members annually, as long as the ranchers give back 40 percent of the number after each ensuing calving season. The cause remains: a return to the Lakota traditional primary source of sustenance, health, culture and resilience – the American bison.

Brewer stuck with it, recalling the words of a former director of the tribal herd at Oglala Parks and Recreation Department: “I was told that for every Indian cattle rancher there should have been a buffalo rancher instead.”

Then the youngest Indian buffalo rancher at age 25, he went on to employ his family members and others in the operation. “For us it was about the brotherhood of the buffalo, the spiritual relationship. We just think buffalo are so awesome, we want to have them around,” he said.

It helped that his family has its own 800-acre spread, so, unlike most Indian cowboys, he doesn’t have to pay a yearly grazing lease fee.

That challenge is what holds back a lot of native livestock operations, according to Tilsen. The undercapitalized grower is forced to sell each year’s calves at auction to a feedlot middleman just to pay for the lease.

According to the 2017 USDA Agricultural Census, nearly 90 percent of the total sales produced on tribal land comes from non-native producers, who account for 65 percent of all active farms and ranches on Indian reservations.

“In extreme poverty, the colonizer controls your means of production, so that native folks are exploited,” Tilsen said. “Now dynamic leaders are trying to change that. We’re just trying to create an opportunity.”

TRAC can provide a better deal to the grower through a direct contract with the wholesale meat buyer. Tanka needs the lower-end cuts, Niman Ranch the higher end. The producer has a guaranteed price and more control of the income flow.

In point of fact, the tribal members now growing cattle may be among the first to benefit from Tanka Fund and TRAC. That’s mainly because Niman Ranch already has an established customer base that demands humanely treated, grass-fed and grass-finished beef.

Native American Natural Foods plans to follow Niman Ranch’s example in ferreting out ways to help individual operations gear up for the market.

Brewer’s operation received Tanka Fund support to the tune of $25,000 for an all-terrain vehicle to monitor the herd of 40, plus labor and supplies to fortify a fence line separating it from the tribal herd of 400. “I couldn’t find help nowhere, so I really feel great about that,” Brewer said.

One of his chronic issues is the attraction of his animals to those in the big herd on the other side of the fence. His have red and blue ear tags. The tribe’s have yellow. Nonetheless, if his heifers birth their calves on the tribal herd’s side of the fence, the calves become the tribe’s, since they have no tags.

He doesn’t blame the animals for preferring the larger 2,300-acre tribal grazing unit. “They’re kind of free. I don’t stress out on it anymore,” he said. He retrieves his ear-tagged adults at the tribe’s annual autumn vet-check roundup. 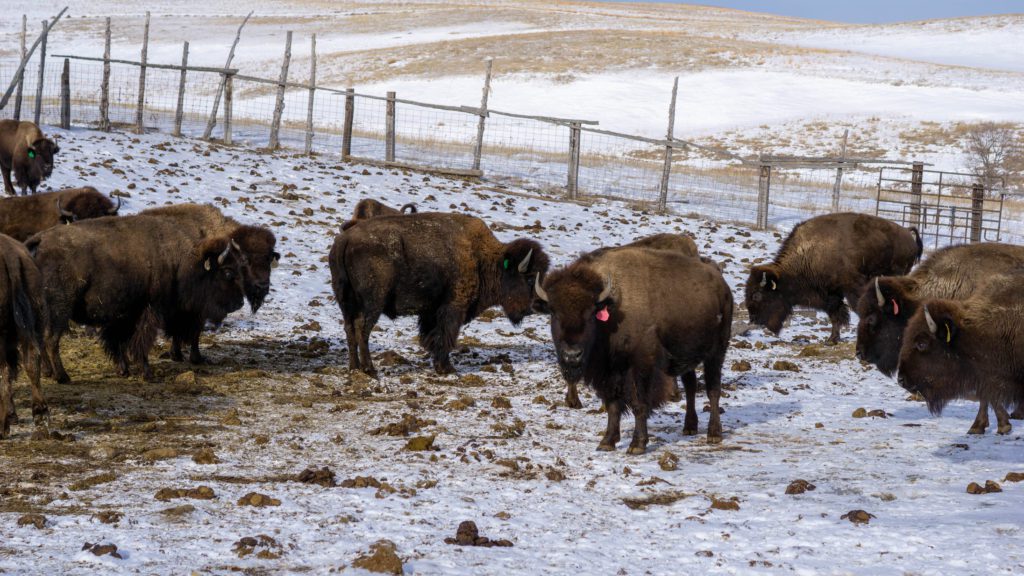 CEO of Native American Natural Foods Dawn Sherman, a Lakota Shawnee Delaware from Pine Ridge, says the Niman Communications Department is expected to weigh in heavily in a publicity campaign to boost the fund and the cooperative. “We want to help 50 or 100 producers, instead of just two or three,” she said.

She and her colleagues are committed to growing the Tanka brand against all odds, as part of their community service, she noted. “We’re more than a brand. It’s who we are,” she said. “We’re like the buffalo. We face the storm. Eventually the storm’s going to end.”

Talli Nauman is a longtime Esperanza Project collaborator and columnist, a founder and co-director of Journalism to Raise Environmental Awareness, and Health and Environment Editor for Native Sun News Today. She can be reached at talli.nauman(at)gmail.com.

A different version of this story ran in Native Sun News Today.