For nearly a decade, The Tyee has reported on a rising number of earthquakes caused by the hydraulic fracturing of shale formations in the region. Now, new studies put the number of such tremors in recent years in the many thousands, raising more worries about the future of the mega-project.

Researchers warn the shaking could become strong enough to crumble critical infrastructure such as roads, high-rise buildings — and dams.

B.C.’s regulatory practices try to limit fracking after small earthquakes have been triggered. But that’s “not sufficient to protect critical or vulnerable infrastructure that have unacceptable failure consequences,” noted seismic hazard expert Gail Atkinson in the May 7 issue of Nature Reviews.

No one can yet predict frack-triggered quakes before they happen, and “hazard forecasting” remains a “critical area of research.”

Another study, released this week by researcher Ben Parfitt at the Canadian Centre for Policy Alternatives, took data from federal earthquake catalogues to show how many tremors the fracking industry is producing near the Site C dam.

The numbers are staggering. Between 2017 and 2018 alone, the industry triggered 6,551 earthquakes greater than 0.8 magnitude in the region near the troubled mega-project with a price estimate of $12 billion and rising.

Drilling by Canadian Natural Resources Ltd., for example, triggered a magnitude 4.6 earthquake in November 2018 that forced the evacuation of the Site C Dam site. It was followed by magnitude 3.5 and 4 events after the fracking ceased.

Those quakes, which shook buildings in Fort St. John, forced engineers to reassess dam safety in a region whose seismic risks have been dramatically altered by widespread fracking.

Parfitt took the recent data and asked David Leversee, an experienced mapper, to create a map showing the proximity of fracking to the Site C dam.

“The map shows that much of the area to the south of the Site C dam is riddled with faults in the shale rock where fossil fuel companies have pressure-pumped hundreds of millions of litres of water into the earth,” concludes Parfitt. 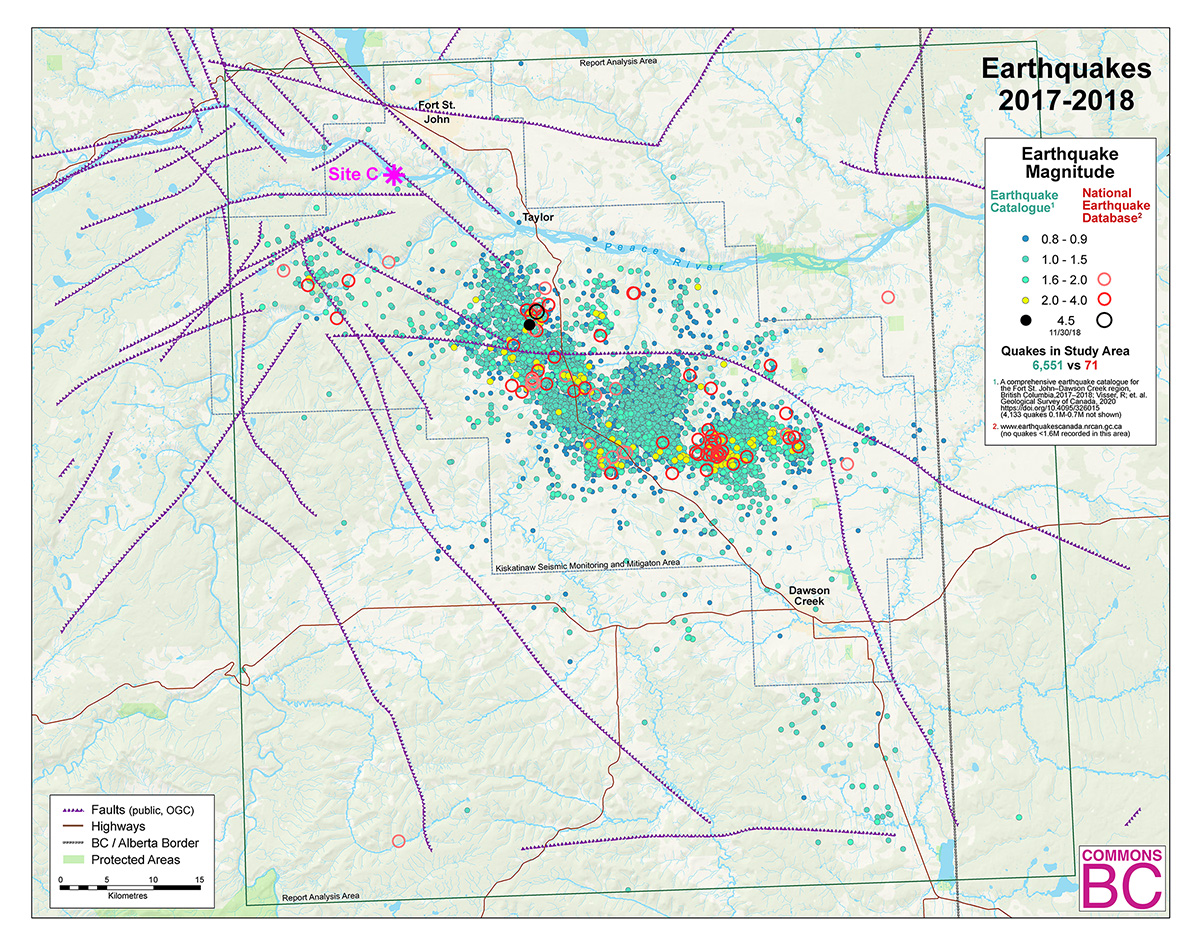 Two years of shaking. Map shows clusters of earthquakes linked to fracking near the Site C project in 2017 and 2018. Map prepared by David Leversee with data collected by Ben Parfitt.

Anthony Ingraffea is a Cornell University expert on hydraulic fracturing — the injecting of liquids deep underground to fracture rock and release oil and gas for drilling. He told The Tyee that BC Hydro was “playing with fire” by building in an area made seismically active by fracking.

“Lubrication and stress changes — both results of fracking and waste injection — can activate long dormant fault systems. If one were to have accurate estimates of fault areas and these stress changes, one could estimate the largest possible magnitude, and that is the key issue, especially with respect to dam safety,” said Ingraffea.

He hopes geologists “are at work now trying to do that estimate.”

For years BC Hydro and the province’s Oil and Gas Commission have been reluctant to talk about the risks that earthquakes triggered by fracking pose to dam infrastructure throughout northeastern B.C.

But in January a freedom of information request by Parfitt found a raft of correspondence that proved that officials have been concerned about the hazards posed by fracking and wastewater disposal in the region for more than a decade.

BC Hydro officials warned numerous people in the provincial government including senior bureaucrats and unidentified ministers that “fracking near its dams could have grave consequences, including the worst possible outcome — outright dam failure,” revealed Parfitt earlier this year.

He shared the documents with The Tyee, which published an extensive chronology on the science and reluctant government response to rising seismicity rates in the Montney region. 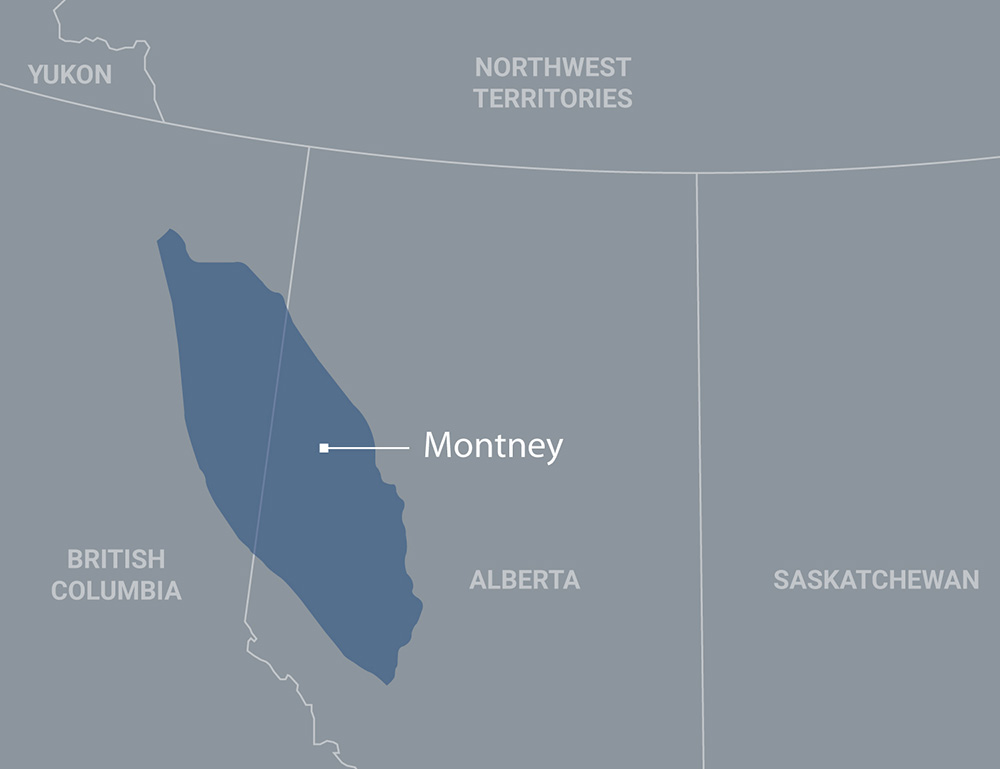 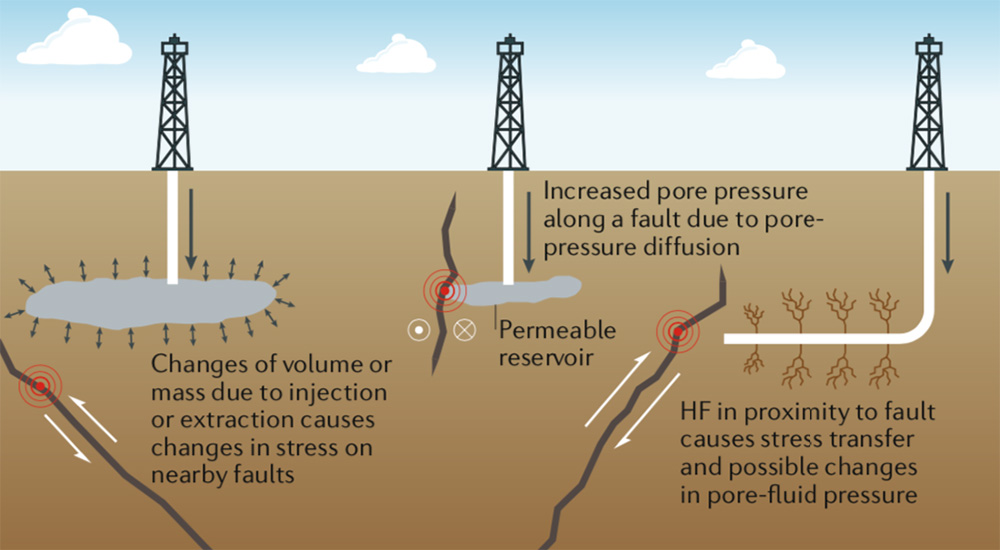 Throughout the Montney shale formation (top) fracking is linked to thousands of earthquakes, including near the Site C dam project. A diagram (below) from Gail Atkinson’s study published by Nature Reviews shows how fracking can create ‘direct and indirect pathways… to critically stressed fault lines’ triggering tremors. Diagram adapted from Cambridge University Press.

Another recent study by McGill University researchers using a different set of data collected in the same region recorded nearly 5,000 earthquakes in an area roughly 60 by 70 kilometres, southeast of Site C dam, between July 2017 and April 2019.

The industry-induced earthquakes ranged in magnitudes from 0.5 to 4.5 for the entire study period in the Dawson-Septimus area.

The researchers wrote that Montney Formation “has hosted the largest [hydraulic fracturing] induced earthquakes in Canada to date.”

They suggested that large-scale fracking had increased the pore pressure in shale rocks that underlie the region and its three dams.

Meanwhile, Atkinson’s study in Nature Reviews and another paper she co-wrote with colleague Hadi Ghofrani convey what scientists have now learned about fracking in the region. The findings include:

The potential threat posed by fracking-triggered earthquakes does not just apply to the Site C project and other dams in northern B.C. In Alberta, TransAlta Corp. is contesting applications to frack near the Brazeau hydroelectric facility which includes earthen power canal dykes, a main dam, a spillway and a powerhouse.