With the Brazilian state failing to protect them from coronavirus, indigenous groups have been forced to find ways to monitor and care for their own communities while also putting up serious resistance to destructive government policies. But these peoples already face increased risks because of longstanding discrimination, inequality, and the recent intensification of efforts to dismantle environmental protections. For the sake of indigenous groups and the environment that they do so much to protect, now is the time for decision-makers in the UK and Europe to implement stronger environmental and human rights regulations instead of continuing to farm out the problem for someone else to deal with, writes Grace Iara Souza (LSE Latin America and Caribbean Centre).

Even before the arrival of COVID-19, the native peoples of Brazil were in a perilous situation, not least because of high-level attempts to use racism to legitimise the dismantling of socio-environmental protections. But the pandemic has only intensified this persecution, and despite the impressive efforts of these guardians of global biodiversity to adapt their strategies of resistance, they cannot be expected to fight the climate crisis and coronavirus alone.

On the contrary, the connections between COVID-19, deforestation, and global perceptions of nature should be central to the thinking of policymakers and investors the world over. This moment when states and societies begin to chart their post-pandemic journey towards recovery represents a chance to move away from the “business as usual” that led to the current environmental-health crisis and to make sure that climate commitments are treated as more than words alone. 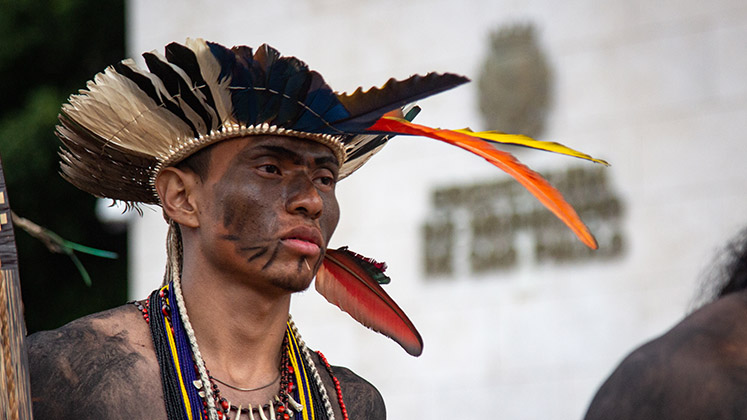 Indigenous groups like the Guarani are frequently on the sharp end of changes to environmental regulations in Brazil (Romerito Pontes, CC BY 2.0)

COVID-19, the state, and indigenous groups in Brazil

Sadly, Brazil has gone in the opposite direction, with the Bolsonaro government trying to control the information shared with the public in order to avoid dealing with the consequences of coronavirus, particularly when it comes to the fate of indigenous peoples. This has meant that indigenous movements themselves have had to take responsibility for documenting cases in their own communities and highlighting failings in official reporting.

By early July, Brazil had seen over 64,000 deaths from COVID-19 at the national level. According to the Articulation of Indigenous Peoples in Brazil (APIB), as of 4 July 2020 there had been 426 recorded deaths amongst indigenous peoples and 11,385 confirmed cases across a total of 124 indigenous groups. In contrast, the Special Secretariat for Indigenous Health (SESAI) had recorded 171 deaths and 7,598 confirmed cases. In the Amazonian region alone, the Coordination of the Indigenous Organisations of the Brazilian Amazon (COIAB) recorded 225 deaths on top of the 146 declared by SESAI.

Aside from under-reporting cases of COVID-19 amongst indigenous peoples in its so-called Special Indigenous Sanitary Districts, the federal government has failed to assist those living in communities not legally classified as indigenous lands as well as those living in urban centres. This effectively discriminates against indigenous peoples outside of titled lands as if their physical location made them somehow less indigenous, which is consistent with a wider tendency to define indigeneity in the process of denying indigenous rights to self-determination and differentiated health care.

This approach also overlooks the fact that the federal government has made little progress in the demarcation of indigenous territories, increasing the vulnerability even of the largest indigenous group in the country, the Guarani. Many Guarani people live on campsites near motorways or on small plots of land whose boundaries are increasingly infringed by urban expansion. Some groups, such as the Guarani Kaiowa, have precarious access to water, while several other groups have precious little space to produce food, leading them to depend on the sale of handicrafts to pay for supplies.

Neither has the government put in place preventative protocols nor a plan to treat indigenous peoples who have the infection. A lack of adequate testing has directly contributed to infection of indigenous groups by health-workers, as has happened with the Yanomami, Kokama, and Kanamari peoples. Nor has any adaptation of the “coronavoucher” emergency basic income been introduced to address the particular conditions of river-dwelling communities, indigenous peoples, and descendants of Afro-Brazilian runaways (quilombolas). Instead, they are forced to travel from villages to urban centres to receive this subsistence payment of $600 Brazilian reals (roughly £90) even though the process can significantly increase the chance of infection.

Rather than attempting to protect indigenous and Afro-descendant peoples, which would be consistent with the Brazilian state’s historic debt to these groups, many members of the Bolsonaro administration have expressed racism and an associated desire to eliminate indigenous groups through assimilation and homogenisation of the Brazilian population. This denial of the richness and cultural diversity of Brazilian society disregards the lives of almost 900,000 indigenous people, with over 300 culturally specific ethnic indigenous groups living in areas both rural (64%) and urban (36%). Bolsonaro’s specific pledge not to demarcate “one single centimetre of indigenous territory” also runs contrary to the government’s constitutional obligation to do so.

Of course, using social isolation as a means of preventing the spread of infectious diseases is anything but new for indigenous peoples. The elders in particular have an ancestor memory of previous pandemics that decimated many of their peoples, especially those brought by the European invasion and the land grabbers, loggers, ranchers and miners that arrived during the dictatorship. It is no coincidence that some indigenous groups have remained in voluntary isolation right up to the present day.

However, despite their expectation of finding safety deep in the rainforest, isolated indigenous groups like those in the Javari Valley have increasingly found their culture and health security threatened. First, there is the threat from radical American evangelical missionary groups such as Ethnos 360 that have received open government support in their attempts to access the area. Then there is the presence of thousands of illegal gold miners, with roughly 20,000 in the territories of the Yanomami and Ye’kwana peoples, which could see them become one of the indigenous communities worst affected by COVID-19 on a global level.

The wilful jeopardising of indigenous peoples’ lives is particularly grave when you consider that the death of each elder represents the “burning of a library“. Whereas a neoliberal logic values those capable of paying taxes and contributing to society financially, the cosmological wisdom that indigenous elders carry is invaluable. These elders ensure the survival of the language, history, and traditions of their ancestors, preserving the cultural and socio-environmental richness of entire peoples. Every premature death represents an unimaginable loss not only for particular families and communities but also for the collective memory of the whole indigenous movement.

The dual health and environmental crisis

Scientists all around the world have been quick to highlight the link between the current COVID-19 health crisis and the wider environmental one. They have emphasised particularly the damaging effects of practices linked to large monocultures – such as poaching, logging, and deforestation – in terms of irrigation, respiratory problems, and destruction of wider ecosystems. Just a week before the World Health Organization declared COVID-19 a public health pandemic in March, climate scientists warned that the Amazon could become a net source of carbon dioxide as soon as the next decade, whereas the Brazilian National Institute of Space Research (INPE) has recently confirmed that Amazon deforestation is rapidly increasing.

Despite already having to deal with the lethal effects of COVID-19, indigenous movements continue to energetically resist government retrenchment of socio-environmental law and policy. Even in the face of attempts to strip them of their constitutional rights, indigenous peoples and their allies have fought back against attempts to scale back environmental monitoring and regularise “land-grabbers” and invaders in Mato Grosso, for example.

With the Amazon fires of summer 2019 still fresh in the memory, and following the remarkable visit of indigenous leaders to twelve European countries in late 2019, there is growing awareness and pressure on these issues from environmental movements around the world. Greta Thunberg’s Fridays for Future movement, Extinction Rebellion, many campaigning NGOs (such as Greenpeace, Reporter Brasil, WWF, Global Witness, Global Canopy, and Fern), companies, investors, and even some EU governments have recently threatened to boycott Brazil if the government fails to curb deforestation and protect indigenous rights.

As much as these threats to sever commercial relations with Brazil might delay damaging policies like the land reform bill or trigger promises to use the armed forces to fight deforestation, it remains to be seen how seriously those in power will be in tackling the climate emergency post-coronavirus. In the past, big words have often failed to result in big actions.

Making threats about commercial relations while diverting business elsewhere seems to offer an easy way out for governments, investors, and companies. When it comes to real changes like strengthening accountability in supply chains, establishing tougher financial regulations, or even simply complying with existing commitments.

Evidence shows that companies are still lagging on their voluntary commitments to the 2020 deforestation goals for the consumer goods sector as well as on the 2030 United Nations Sustainable Development Goals (SDGs). Particularly important here is SDG12 on sustainable production and consumption, which includes a host of targets to encourage more responsible use of resources and better management of supply chains.

Clearly, Bolsonaro’s government and Minister of the Environment Ricardo Salles are to blame for “running the cattle herd” through the Amazon, which threatens the health and human security of indigenous peoples and rainforest dwellers in Brazil. But behind closed doors the international community is also responsible for financing environmental destruction and human rights violations in the Amazon and the Brazilian savanna.

British and EU banks and investors are linked to the cattle industry, and the UK government has even been feeding its military personal with beef sourced from illegal lands in Brazil. Soya used to feed chicken in the UK continues to contribute to deforestation, while mining giant Anglo-American has expressed its interest in mining on indigenous lands. Even the British Environmental Agency Active Pension Fund, amongst other pension funds such as TIAA, has financed farmlands linked to deforestation and displacement of local communities.

These kinds of investments are increasing illegal deforestation, exacerbating the climate emergency, exploiting the current government’s dismantling of socio-environmental policies, and further contributing to the genocide of Brazil’s indigenous peoples. The question that remains unanswered is whether these processes will continue unabated in the post-pandemic world, with a supposed “green recovery” obscuring continued exporting of deforestation and human rights violations.

The signs coming from Europe via the EU-Mercosur free-trade agreement are not especially encouraging, as the indigenous leader Kretã Kaingang of APIB has pointed out:

Decision-makers the world over face this critical health and environmental crisis with the clock ticking on global warming of 1.5 oC and the sixth mass extinction of wildlife. What is needed now is not only a global coalition to protect indigenous peoples’ health in Brazil but also the real delivery of climate emergency commitments already promised to British and European voters. To avoid indigenous genocide and secure the lands of rainforest peoples, governments and the financial sector must implement stronger environmental and human rights regulations that at last prevent issues of deforestation and environmental injustice from simply being farmed out to become someone else’s problem.