The death of suburbia has been predicted many times, and yet suburban development endures. Will the current pandemic finally make the difference? Strong Towns president Chuck Marohn suggested it might a month ago, for two reasons.

First, in the wake of the economic wreckage of COVID-19, governments may just be too broke to handle the fiscal liabilities and infrastructure costs of suburbia—and when those costs are more immediately felt by residents, they’ll leave. He pointed out that “the North American development pattern is built with an assumption of permanent affluence”—something that the economic consequences of the current pandemic may finally disabuse many people of.

Second, even if the suburban experiment doesn’t economically collapse, he suggested it may do so because the closures and restrictions necessary to keep people alive have made suburban limitations manifest as never before. “Those of us living in cities can hear the birds instead of car horns,” Chuck wrote. “The air seems cleaner. The city, more human.” So we may see a critical mass of people pushing against cities sacrificing their urban neighborhoods for the sake of enabling suburban commuter ease.

Both of these speculations could be countered, of course. In the first case, will the economic devastation of COVID-19 really be sufficiently devastating, and does anyone actually want it to be? Even setting aside the unfortunately enduring appeal of having one’s own (heavily subsidized and mortgaged) castle on a cul-de-sac, the suburbs are central to school district competition, socio-economic sorting, and what David Imbroscio has called the logic of “liberal expansionism,” the linkage of suburban development with the push for ever-greater regional investment in a city, whether corporate or governmental. With all that in place, isn’t it likely that the means to keep suburban costs steady will somehow be found, absent a truly total economic collapse? (Note the Republican support in Congress for a second round of pandemic-related stimulus, this one focused, predictably, on infrastructure projects which historically have primarily served suburban commuters.)

As for the second case, will the mere experience of a healthier urban environment with fewer cars really lead people to decide against them? That’s a change much longed for by anyone who worries about either the environmental health or the cultural strength of where they live—but when you place it against the delight of record low gasoline prices, and rates of infection which make urban density quite reasonably seem as something to fear, I’m not sure how much I would count on it.

During a Eutopia Workshop discussion organized by the good folks at Solidarity Hall, Chuck suggested that, whatever our speculations of a post-suburban future, the pandemic is going to force nearly every American city or town into one of two camps. Cities that take what he labeled “option 1” would be those who dare not contemplate real economic collapse, and thus will instead insist that residents be provided with every economic opportunity for continuing suburban and auto-centric ways of life, no matter what. As for “option 2,” that would be the cities which do what is necessary to adapt to the reality of suburban costs in the face of the economic recession we are almost certainly facing—including doing the work to build up those civic strengths which will enable their residents to follow through on what the restrictions we have been operating under have hopefully allowed most of us to recognize.

What might those civic strengths be? In a word, they’re neighborhoods. 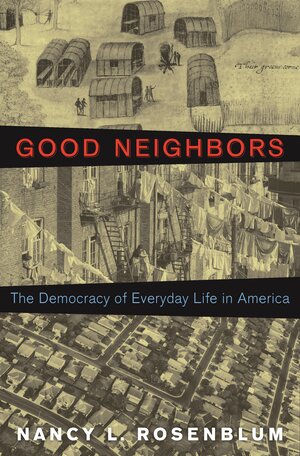 Note that “neighborhoods” are not necessarily “communities.” Community feeling and friendships can obviously exist among neighbors, but they don’t have to: what really matters to a neighborhood is proximity. Neighbors, because they live nearby each other, end up creating public spaces that can be mutually shared, and forming (both with and sometimes against one another) routines around and in the midst of those public spaces which bring richness to ordinary patterns of life. As Nancy Rosenblum wrote in her superb book, Good Neighbors: The Democracy of Everyday Life in America, neighbors exemplify “weak ties.” Neighbors regard each other as “decent folk” (or at least aspire to, and commiserate with other decent folk in the neighborhood about those bad neighbors who choose to not so aspire). They show reciprocity, speak out when necessary, but also abide by the rule “live and let live.” Hence, the neighborhood is a place conceived in light of at least a degree of pluralism, mobility, and anonymity, with proximity being the essential bond:

To moral philosophers committed to more demanding expressions of mutual respect or principled toleration, live and let live falls short. To disparage it is a mistake, however….”Weak ties” based on infrequent interactions are…[themselves a] critical resource….[O]rganizations where neighbors develop the capacity for collective action are key…a close cousin to the…rudimentary cooperation in countering people who flaunt reasonable expectations for “for what anyone would do, here” (pp. 113, 139-140).

Understanding the central role in distinguishing between different cities, and especially between different city approaches to dealing with the pandemic crisis, is crucial. In a small community of friends, of people committed to a shared (but more often than not also quite exclusive) faith or ethos or way of life, encouraging people in recognizing that which Chuck pointed out, and supporting one another economically in making the adaptations he suspects may be mostly unavoidable, would presumably go much more smoothly than it likely will in the pluralistic cities which 80% of Americans live in. The Strong Towns aim, as I understand it, is to nudge the urban environments we have to greater sustainability, and thus greater local empowerment, within which a whole host of particular communities can play their organic role. To the extent that we can build up the “weak ties” of our neighborhoods, build up their shared spaces and the trust they inculcate, build up the opportunities they provide for people to see the costs and opportunities of collective life directly, the more likely option 2 will become.

A central part of that building involves the “social infrastructure” that Elias Crim, the director of Solidarity Hall, wrote in his response to Chuck’s presentation. He discussed the “traditional economy of cooperation,” which has parallels in various distributist, socialist, and communalist institutional forms—none of which are particularly efficient, at least not from a market perspective. They allow for overlapping and conflicting responsibilities, tradition-bound forms of interaction and service, complicated collective decision-making practices, pricing mechanisms and welfare policies that reflect localized information, and more—all of which will make for economic forms which are more resilient when disasters occur, but in the meantime do not maximize efficient results. 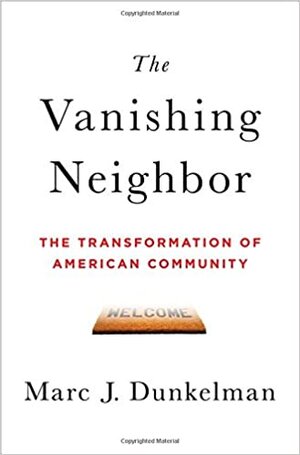 What does this have to do with neighborhoods? In a sense, everything—because in many ways, the weak ties of neighborhood associational life and routines are the very definition of “inefficient.” Marc Dunkelman, in his book The Vanishing Neighbor: The Transformation of American Community, makes this his central thesis: that the routine, repetitive, inefficient, and overlapping encounters and social constructs which emerge from ordinary proximity with other people form a desperately important “middle ring” of casual trust and mutual support. Quoting Jane Jacobs’s line about neighborhoods being “valuably inefficient,” he draws upon the work of Sean Safford to consider two different Rust Best cities—Youngstown, Ohio, and Allentown, Pennsylvania. In the latter, “neighbors attended a variety of different colleges and worked in different mills. They were congregants at different churches and regulars at different bars…..[This] random intersection of individuals from different pockets of society spurred big new ideas—even when they appeared to waste resources. Regions focused too exclusively on efficiency may have been able to produce more with less, but…[faced] an insufficient capacity to adapt to new circumstances” (pp. 171-172, 176).

If the current pandemic demands anything, it is certainly the “capacity to adapt to new circumstances.” So as economic suffering and new realizations open up the possibility for a truly post-suburban future, however minimally, with such possibilities confronting all sorts of contrary pressures along the way, a focus on “weak,” neighborly ties is crucial, as whatever transition may be in the offing may well depend upon those distinctive civic resources. What should such a focus look like? Much like some of the principles which Strong Towns has laid out in their Local Leader’s Toolkit. In particular, for the enriching proximity of neighborhoods to function, the people living there:

Not every town or city is an Allentown; every place has its unique social architecture. But wherever we live—which means, at present, wherever we are sheltering in place, wondering what comes next, and, quite possibly, relying upon our church and work communities, our family and friends, and our neighbors to get through the day—there are neighborhoods which need our help. Those overlapping, inefficient, weak ties between all of us, living next door or down the block from one another, are important for getting our places to make the beneficial shifts away from suburbia which this terrible pandemic makes possible. We should all find a good place nearby us to start.