For airlines, the reckoning is no longer far away on the horizon. It’s now a jumbo jet meters from the runway, landing gear down. Without a sizeable external cash injection, many international airlines will follow Virgin Australia into insolvency within months, if not weeks.

Should governments bail airlines out? And if so, should any conditions be imposed, particularly in a world that requires rapid progress to net-zero emissions?

The uncertainty of COVID-19 and a pancession (pandemic-induced recession) of unknown duration, has meant the short-term bankruptcy risk for many airlines is at an all-time high. It is becoming increasingly difficult for airlines and aerospace players to source finance through traditional private debt and equity pathways. But underlying this are some salient truths. Many countries see mobility, airline jobs and a competitive aerospace sector as non-negotiables – and will do all they can to prevent the loss of a major airline.

However, airline bailouts are an inefficient use of taxpayer money at a time when fiscal recovery (stimulus) spending is sorely needed.

We recently surveyed 231 leading economists (from 53 countries) including senior finance ministry and central bank officials, for a new Oxford Review of Economic Policy paper, and asked them about 25 different stimulus policies. We found that airline bailouts have the lowest perceived economic payoff and the lowest overall desirability. Conceivably these policymakers were put off by the industry’s carbon emissions and perceptions of history repeating itself. In this vein, governments want to avoid setting a precedent for future crises – that is, they hope to encourage responsible behaviour by the industry. Any airline bailout clearly should require a quid pro quo.

The solution is simple: any airline bailout should include conditions that the airline reach net-zero carbon emissions by 2050, with interim targets and a plan to deliver. If airlines fail to meet these conditions, or any number of intermediate climate-related targets, bailout funding would be converted to equity so that the taxpayer could own a stake.

In this way, airline executives and shareholders would have strong financial incentives to meet carbon reduction targets, governments would improve their progress to meeting international climate commitments, and the world would benefit from slowed global warming. 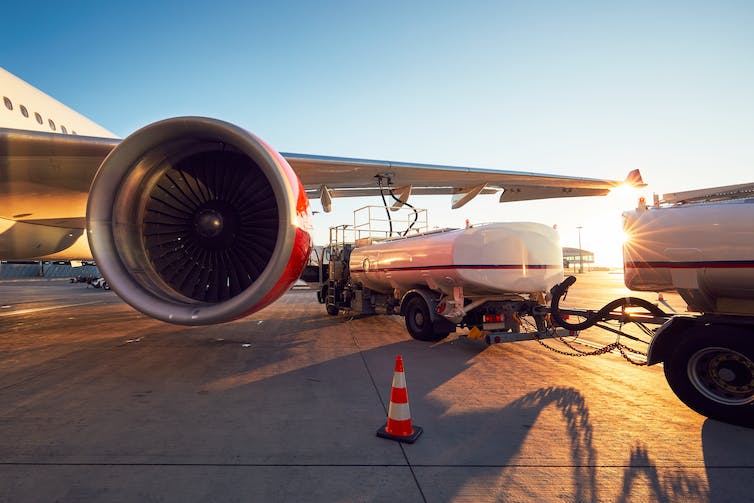 Green bailout conditions should allow for strong ambitions – such as airlines reaching 30% sustanable fuel use by 2030 – without prescribing solutions. Governments must empower airlines to develop their own pathways for carbon reduction, providing the freedom to business to determine the most cost-effective decarbonisation choices.

Even airlines which are not bailed out need to do better on sustainability. The current global agreement, CORSIA, the Carbon Offsetting and Reduction Scheme for International Aviation, requires airlines to offset all growth in emissions from 2020 onwards. This is a good start, but it is far from enough to reach net zero in three decades time.

Yet, as a result of the huge reduction in air travel, the global airlines trade association, IATA, has implied that the climate emergency should be deprioritised to allow for COVID-19 recovery, citing “inappropriate economic burden”. Maybe a realistic compromise would be to cut the airlines some slack in the short term, perhaps using the average of 2017-2020 emissions as the baseline (rather than 2020 alone) – the extra two years would reduce the effect of the crisis.

However, we can and should ask much more of the industry in the medium and long term – nothing less than a collective net zero target is required.

The concept of net zero aviation is not far-fetched. Qantas, IAG and Etihad have already committed to reaching it by 2050 while Finnair believes it can do it by 2045. How? Through alternative power, efficiency opportunities and direct carbon offsets.

Jet fuel and aviation gas have almost-exclusively powered jet turbine and propeller planes since the second world war. Biofuels were first approved for commercial airliner use in 2011 and though they remain much more expensive, production efficiencies are reducing prices, as might emerging algae and sugarcane-based technologies.

Battery-powered flight is no longer science fiction. In 2019, the world’s first fully electric commercial plane was unveiled at the Paris Air Show. Projections suggest that such aircraft could become a staple of short-range travel by 2035.

New zero-carbon fuels hold great promise. Both hydrogen and ammonia can be produced efficiently from air, water and renewable energy. Synthetic kerosene (made from renewable hydrogen and CO2 captured from the air) is another route that is being explored. All of these rely upon renewable energy, which is getting cheaper every year.

Finally, airlines can partner to play a key role in developing more reliable carbon offset markets. As discussed in a recent Nature paper, carbon offsets are not all equal because they store carbon for longer or shorter times. Airlines can hold competitors to account on weak carbon offset standards and lobby for industry-wide carbon audit processes that are conducted through independent review.

The impacts of COVID-19 on aviation are only just beginning to be felt. Governments should use bailouts to encourage innovation and get something for all of us, and the climate, in return.