Some years ago I helped a friend plant a cherry tree in her back garden and we had a conversation about it. She specifically selected a tree that was bred to produce beautiful spring blossoms and gorgeous autumn foliage, but no actual cherries. She didn’t want cherries falling off the tree and staining the pavement. Nurseries have spent decades catering to this desire. This, in a nutshell, explains our present circumstances as a society. The cherry tree was ornamental rather than productive. It consumed money, fertilizer, water, and care without producing anything useful.

Social expectations and regulations have built up over time that enforce a pervasive ornamental landscape. Meanwhile productive gardens are forbidden because they’re untidy and set the wrong tone. In many locations there are serious consequences to not having a manicured lawn and neatly trimmed shrubbery. This practice is based on a culture that values useless things because they’re useless. There’s status in a neatly tended space that conveys a message of respectable conformity and leisure. There’s also a strong cultural rejection of useful productive things because they’re useful and productive. 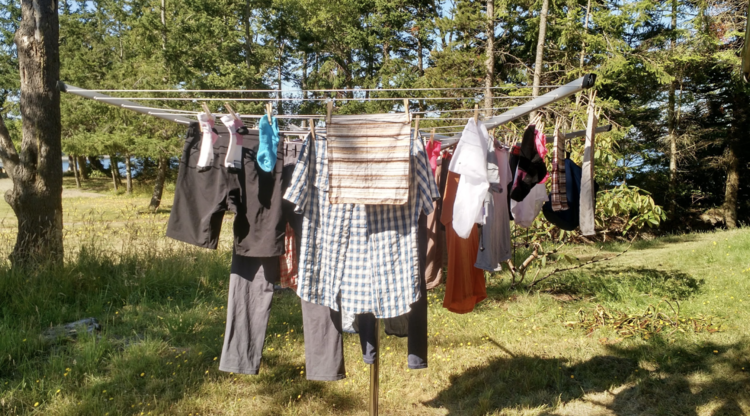 My favorite example of this concept is the humble clothes line. Is it legal to dry your laundry in the sun where you live? In many parts of the country this is expressly forbidden by law and/or private binding agreement. This sort of activity is associated with rural peasants, impoverished slum dwellers, dirty hippies, white trash (or worse), and is at odds with the look and feel of a prosperous community. It might be a scorching day in August but everyone is compelled to operate a mechanical dryer in the house and crank up the air conditioning because anything else is shameful and verboten. This goes a long way to explaining why lawns are the largest crop in the U.S.  We can afford this cultural imperative at the moment, but that might not always be the case. 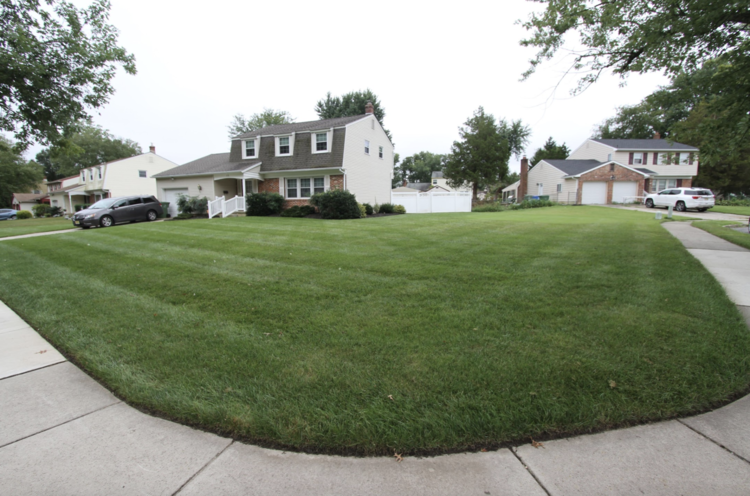 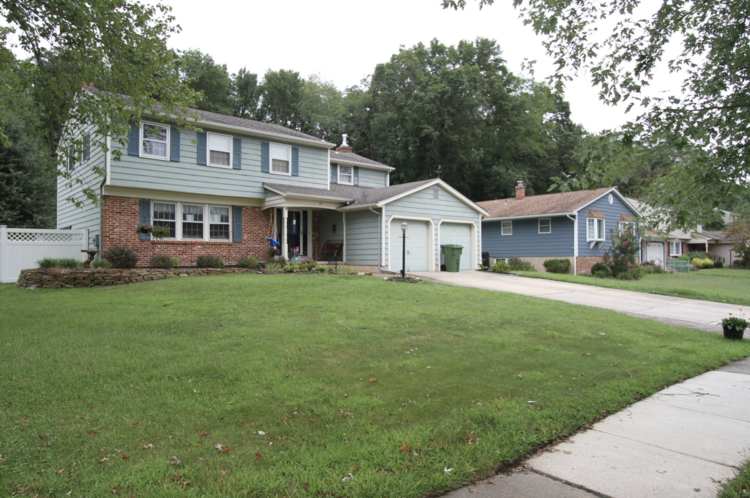 The COVID-19 situation resulted in an instant shortage of many basic commodities. Garden seeds were among the things that experienced an overwhelming surge in demand with limited availability. It suddenly occurred to people that the international just-in-time supply chains might not be as secure as they assumed. Many people also realized their individual households were unprepared for emergency situations. Whether this was a purely emotional reaction or based on an underlying reality is still an open question. The prosperous are temporarily inconvenienced and tend to believe our hyper-complex systems have adapted on the fly with no real harm. People lower down the social and economic ladder are significantly harder hit. 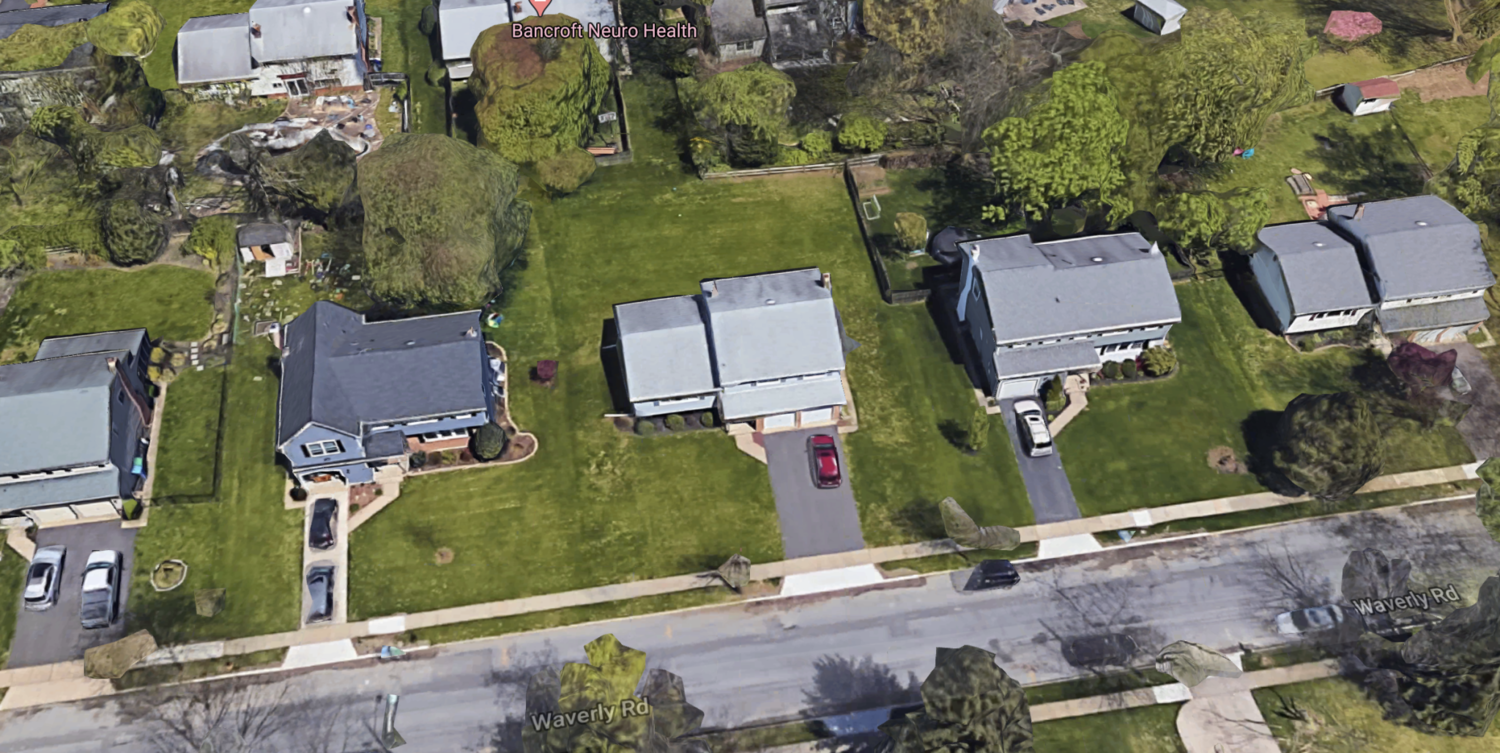 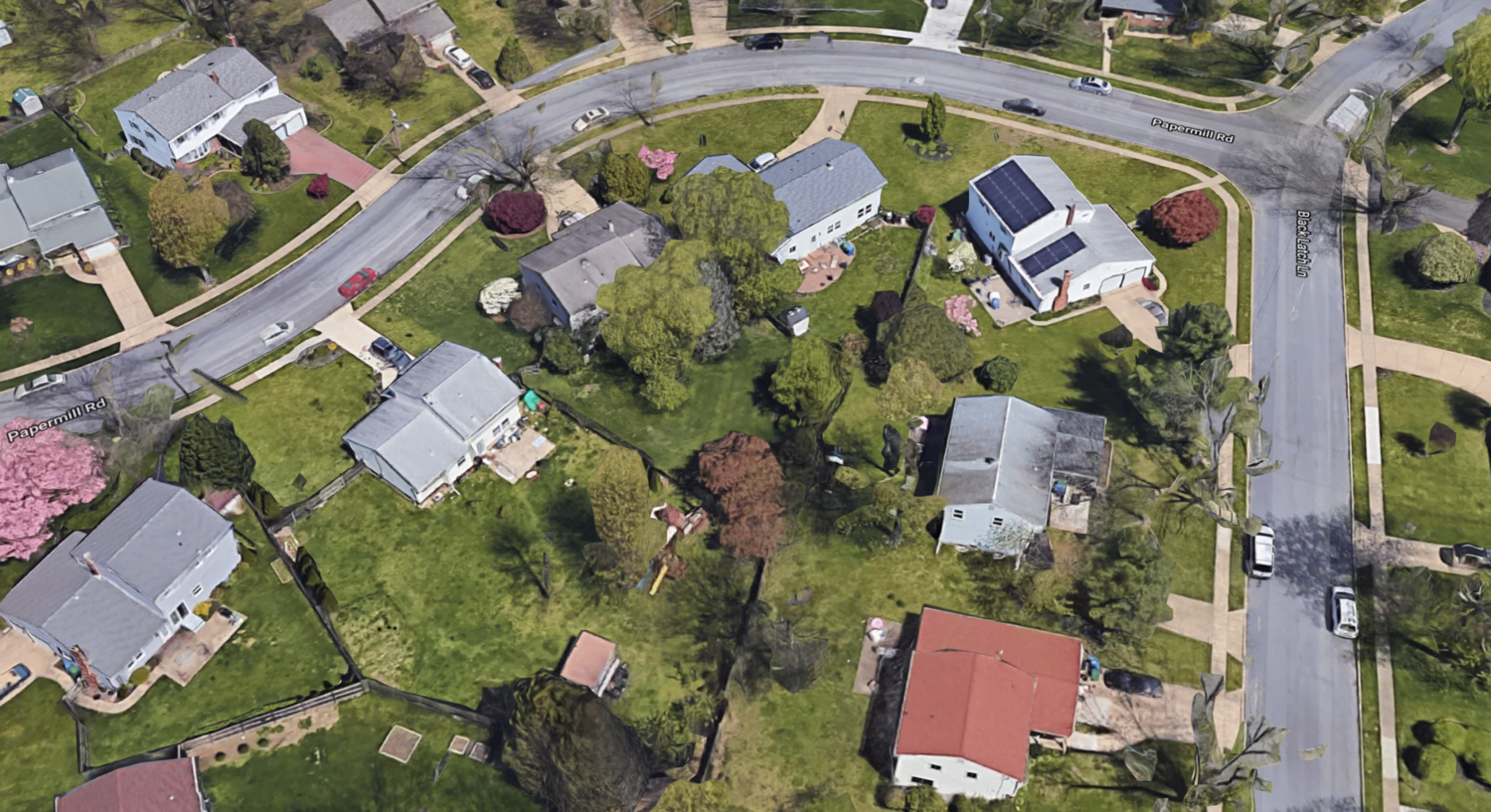 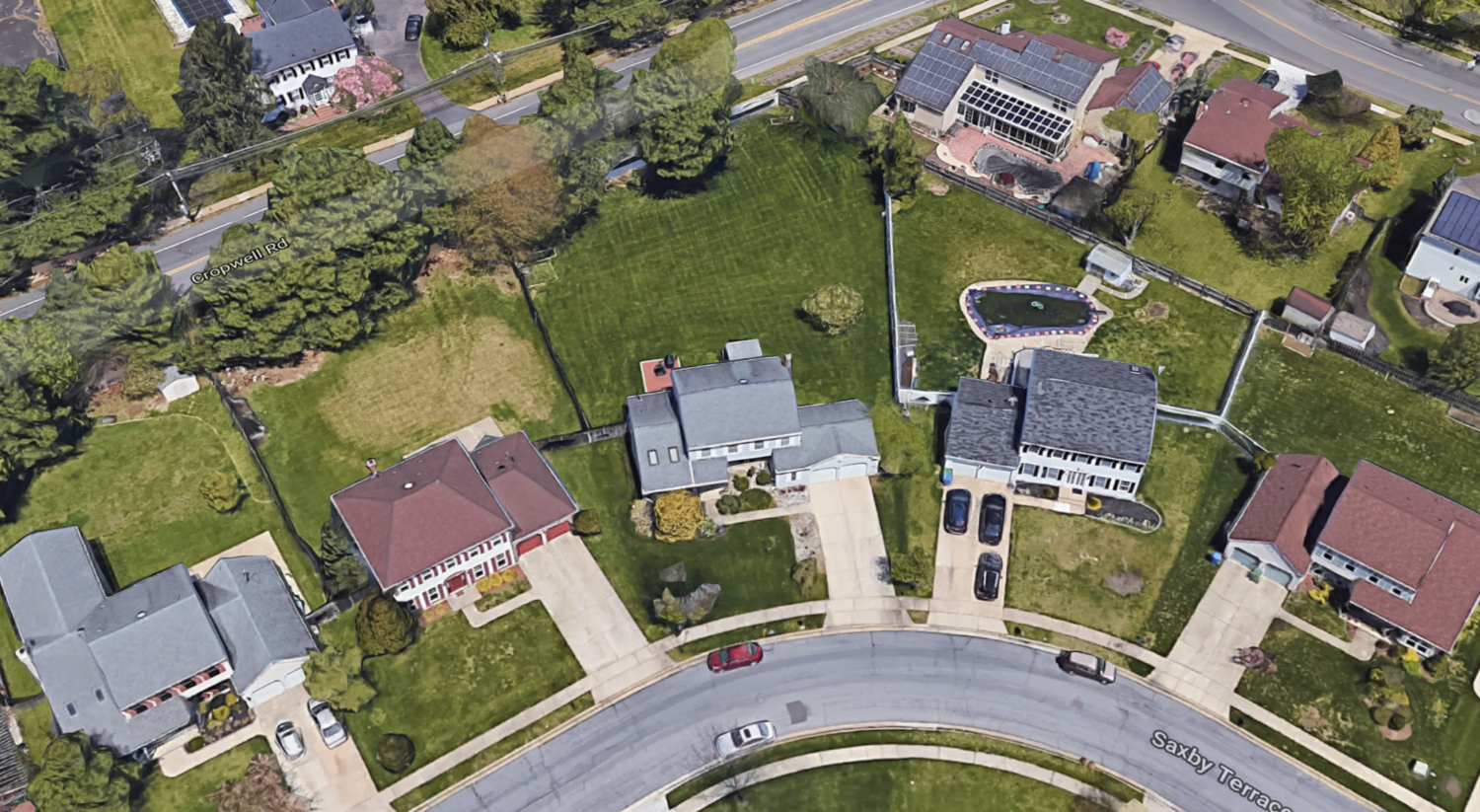 These aerial photos (via Google) show a typical suburban subdivision. There’s enough sunny arable land here to supply all the vegetables, fruit, honey, eggs and poultry for these families. Producing food here would require no additional water or fertilizer compared to the decorative treatment it currently receives. The need for transportation would be eliminated entirely. These homes are large enough to accommodate generous deep pantries and seasonal cool storage in the basements. Home preserving of the summer and autumn harvest would extend the bounty through winter and into spring. No one is suggesting this is the appropriate environment for growing grain or raising cattle, but productive gardens would go a long way to making such places more able to ride out difficulties. At the moment society isn’t really interested in having that conversation. We prefer to keep things orderly and nonproductive in order to filter out the riffraff. 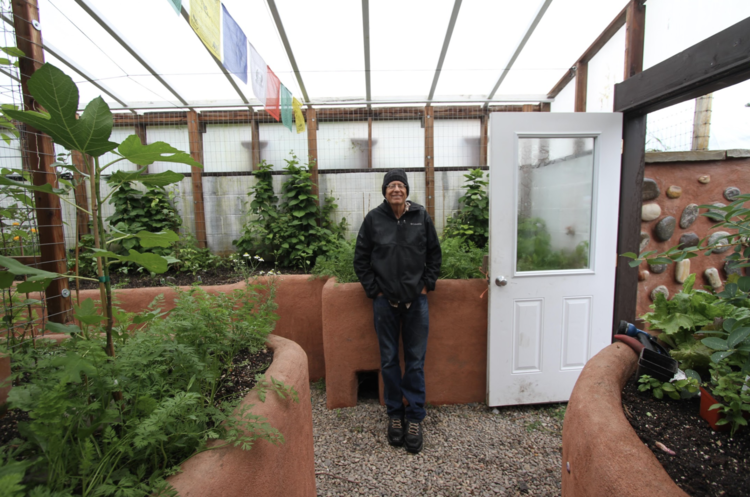 A couple of years ago I visited Richard Weaver at his home in Bozeman, Montana. Bozeman only has 60 frost free days a year. If you want to grow just about anything you need to do it in July and August. Period. So Richard built a solar greenhouse that’s tucked into the earth in a way that moderates the temperature passively and allows him to grow frost sensitive plants year round with minimal mechanical systems and no fuel inputs. I was impressed to see figs growing indoors in this harsh climate.

His immediate neighbors, which include a golf oriented community and a condominium complex have been perpetually at odds with his activities. His garden is too low brow for their taste. I noticed that Richard is actually far wealthier than many of his neighbors and owns a great deal more valuable property than they do. But the outward appearance of his garden is that of a lesser demographic. The insecure middle class is both more vulnerable and less tolerant of cosmetic deviation. Fortunately his home and gardens are not part of a home owners association and nothing he does is in violation of any municipal regulations. It’s ironic that a place like Montana with a culture of rugged individualism is so hostile toward people providing for their own needs.

I understand why so many people choose the security of a highly regulated environment and I have no desire to inflict anything different on to them against their will. I’m also well aware of the logic that says middle-class professionals shouldn’t bother wasting their time, energy, or money on home food production when groceries are so cheap at the supermarket. But personally I prefer an arrangement that allows for a high degree of resilience and a kind of Plan B insurance against unlikely but highly disruptive events. Our present institutional systems work remarkably well…until they don’t.

Here are several examples of households that are organized around more self reliant systems. They show people in climates as different as Quebec and Florida, New Jersey and New South Wales, Phoenix and British Columbia. There should continue to be places where these activities are not only tolerated, but fully embraced and encouraged. Give it Another Century and We Will See How it Goes