Every intellectual had a “draft of a new community in his waistcoat pocket.— Ralph Waldo Emerson

We have reached a new epoch in our planet’s history. Few can look at the increasingly authoritarian tendencies across the globe, the mass stress-fueled migrations, the degradation of the environment, the increasingly chaotic climate, and the fragility of systems exposed by the current Covid-19 without pondering upon what are authentic responses in these times. I would like to offer some observations and perhaps some questions regarding the role of intentional community in a world who may be calling for a reimagining of collective actions.

I have been part of a number of communities tied to independent schools and political and activist-driven movements. I want to look at three primary examples of communities that I believe are relevant to reimagining the ‘New Community’ and provide an insight into the taste of community.

The Abode of the Message

For many of us, the ideal of living in an intentional community was a vision that led to a quest for such. Personally, an early experiment lasted several years in the later 1970s at a Sufi community, The Abode of the Message, in upstate New York. Situated on 350 acres of a former Shaker utopian community and based on the idea of the universality of all religions, our band of just over one hundred individuals and families strove to put into practice the ideal of “spirituality in everyday life.” We farmed, baked, led retreats, and worked in a variety of jobs in surrounding towns. The Abode spawned the Omega Institute, a mechanic shop, a private school, and a fledgling computer business set in a former Shaker workshop. 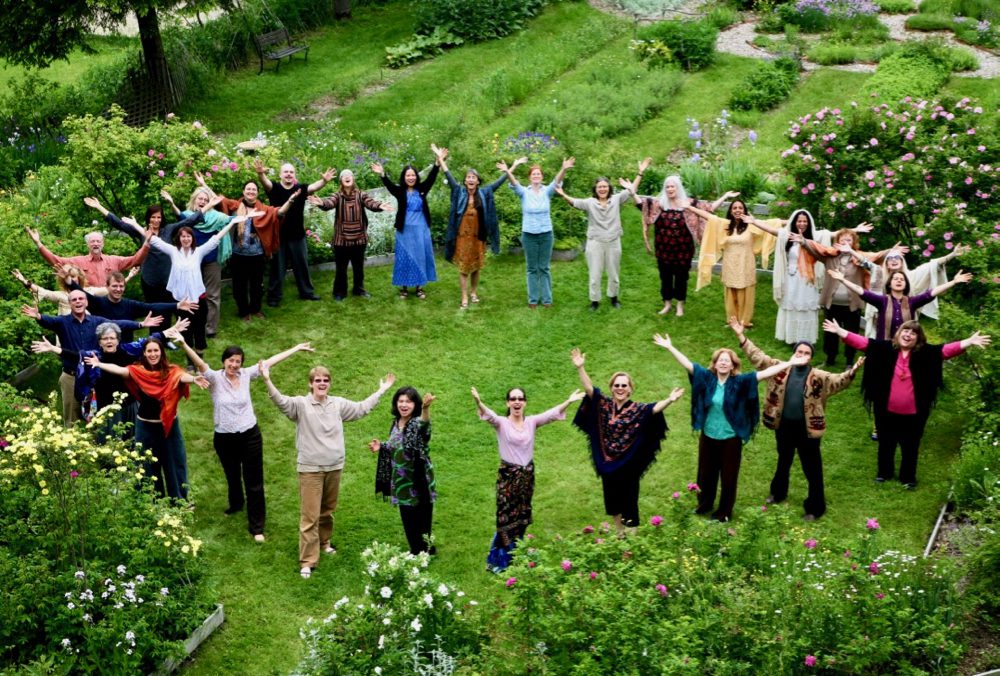 A central kitchen and dining room provided three hearty meals a day. We all participated in Karma Yoga in service to the larger community. In exchange for our “room and board” we each contributed an equal fee that was earned either in a direct community-based position or from work in the surrounding area. Housing varied from dorm rooms in the 150-year-old crafted Shaker buildings, variations of renovated structures, and owner-built homes.

The spiritual principles were led by Pir Vilayat Khan, the son of Hazrat Inayat Khan, who had brought to the West the Chisti Sufi Order based on poetry, music and “Love, Harmony, and Beauty.” The Abode community organization was coordinated by a director and a coordinating council.

I had arrived shortly after the founding in 1975. The energy of the place was positive, energetic, focused and devotional. We were all there in quest of our spiritual development. The personal was on the whole subjugated to the communal. We were in this grand experiment together and grateful for the spiritual framework to exercise within.

This effort was part of the movement of intentional communities that rose up in the late ’60s and ’70s. Hundreds of such endeavors appeared driven by broad ranges of ideals. Not unlike the Utopian Communities that were formed in part out of the Transcendentalists in the 1800s, people were eager for a new framework of living that reflected their views of living in harmony, equality and peace.

Living together intentionally requires a great deal of wrestling with the individual versus the communal. The culture that most of us grew up in has a grand emphasis upon the individual. Few from mainstream US culture have the natural capacity to thrive within communal systems. We seem to easily chafe at an appeared yoke of authority. Our desire to be untethered conflicts with the requirements of the group.

I came to believe that for a group of people of our ilk to be successful in community projects or intentional communities, there must be a grander vision, a purpose, a dedication to something beyond the individual. We must be compelled to participate in a shared vision, an ideal, in order to cast away the tethers of “mine.” 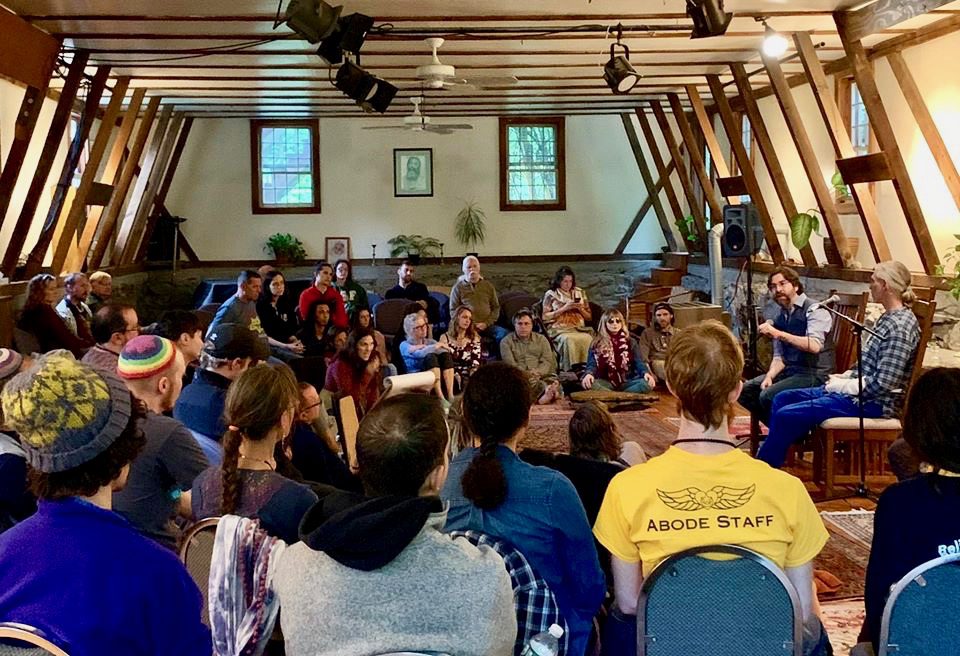 The Abode was just such an experience. We collectively celebrated the creating of a new cauldron of spiritual journeying, respectful of each other’s’ efforts while being led by a teacher — Pir Vilayat. We were linked to other spiritual communities like Findhorn in Scotland, the Western Priory in Vermont and the Farm in Tennessee. Daily meditations, classes and Universal Dances of Peace maintained a level of engagement in spiritual practices.

I, like most at the community, had taken initiation into the Sufi Order. Over time, rather than building a feeling of belonging and kinship, I began to feel trapped. Nothing in particular was driving this unease, but the idea of being within a box — any box — began to feel restricting. I offered up my “Sufi resignation,” continued to direct the Mountain Road Children’s School, participated in community activities, married and conceived a daughter. But something had changed in my participation in a grander vision. We left the Abode and headed west to Santa Fe, New Mexico.

“In the woods, we return to reason and faith. There I feel that nothing can befall me in life, — no disgrace, no calamity, (leaving me my eyes,) which nature cannot repair. Standing on the bare ground, — my head bathed by the blithe air, and uplifted into infinite space, — all mean egotism vanishes. I become a transparent eye-ball; I am nothing; I see all; the currents of the Universal Being circulate through me; I am part or particle of God.”—Ralph Waldo Emerson, Nature

Another intentional community-building experience was the phenomena of All Species Projects (ASP). Instigated and led by musician, poet, and ecological philosopher, Chris Wells, the group had a vision of community celebration to honor the interconnectedness of all species. Over 15 years in Santa Fe, a motley crew of inspired, creative, artfelt folks came together each Spring to dig into an ecological theme to investigate, explore and engage with. Based around a free and public community studio, people threw themselves into mask and prop making, performance building, music whirling, outreach reaching, and community building. Stilters, costume makers, acrobats, seamstresses, carpenters, painters, dancers, printers, tie-dyers and more wove together an informed celebration that culminated in a one-day extravaganza of ritual, parade, pageant, music, dance and hundreds of representations of “All Species”. 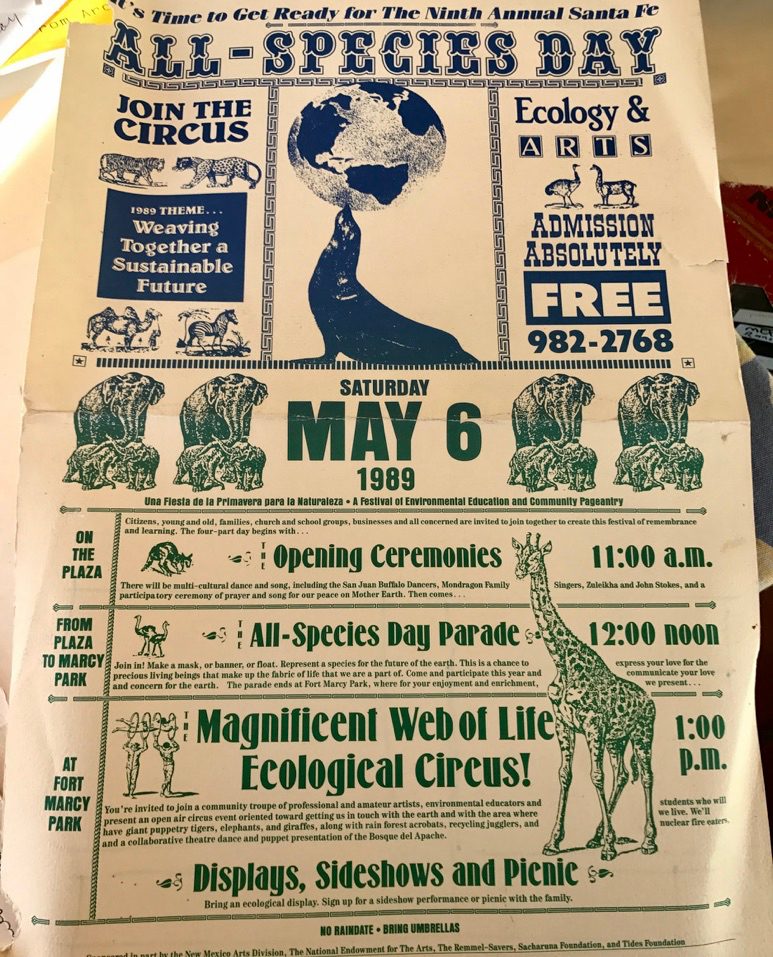 The All Species Community Studio was the centering device for project and community building. The studios were usually held in a large warehouse or former retail space. All who crossed the threshold were invited to either design and build their personal representative of a species and / or participate in the creation of props, music, floats, large puppets, stilts, and banners for the theatrical pageant, parade, invocation or side shows.

One of the most important outcomes of this annual event was the community that formed through these devotional acts of people eager to celebrate their love for the diversity of the Earth’s web of life, to be part of a project of joy and meaning, a place where creative energy and skills were honored, honed, and developed. There is something important in the acts of the freely offered skills, talents, time, knowledge, and enthusiasm of people who became part of this community of creation. Once again, authentic community seems anchored in a call to a higher purpose that leads and inspires group cohesion. 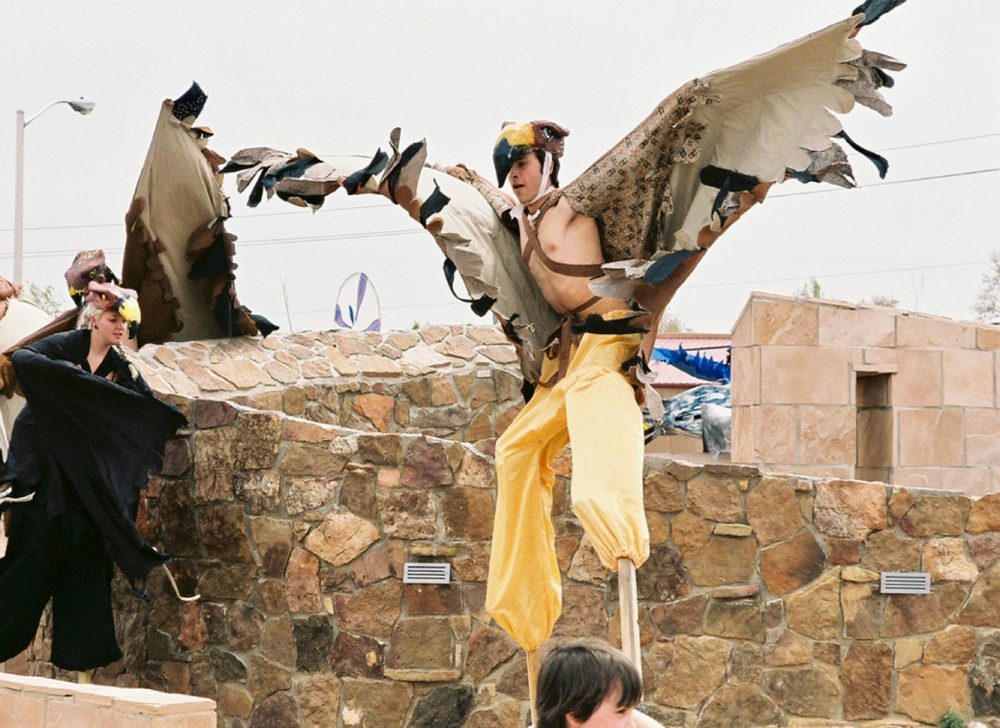 There were many rippled clusters of relationships that grew out of these ASP annual events. One such grouping, overlapping also with Santa Fe’s Little Earth families and staff, was a search for a farm/wilderness site that could provide a year-round onsite setting for schools as well as a land-based community to reflect a growing interest in an integrated natural and domestic environment.

Meetings to identify potential members, their resources and their visions commenced in earnest. In 1987-1988, the search began for property that was affordable, met the criteria and was within a reasonable commute to Santa Fe. It ended up rather empty-handed. 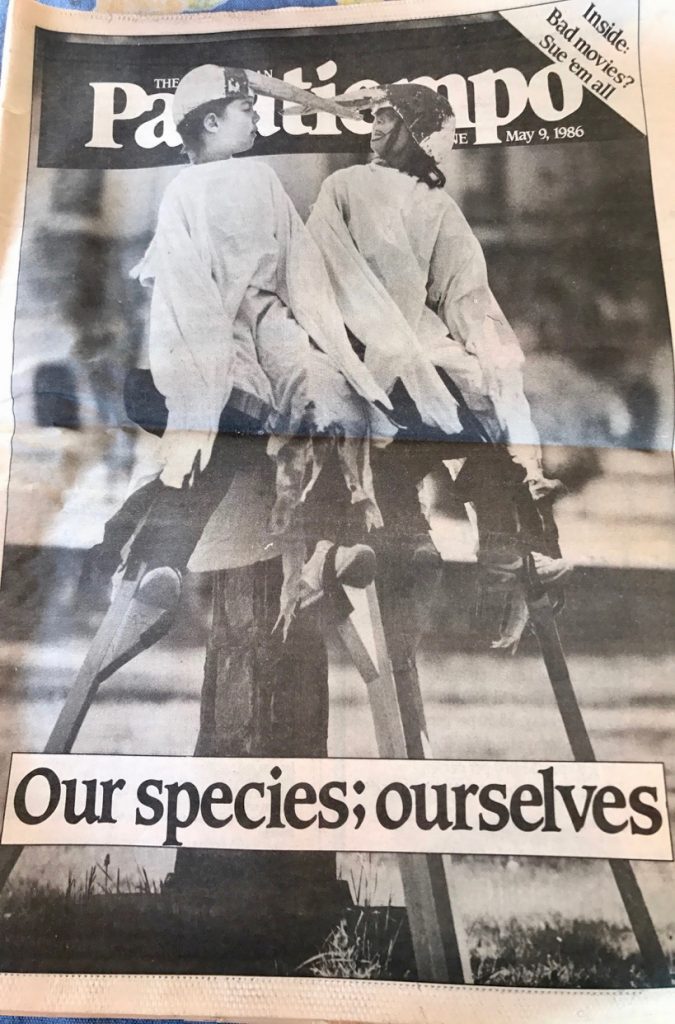 It wasn’t until 1989 when my wife Cindy and I found and purchased property northwest of Las Vegas, New Mexico, and along the Tecolote River that an anchor was established for the vision. The land we moved onto had springs, arable land, meadows and forests. Although the property had been homesteaded in the past and had remnants of Billy Goat Roberts’ farm, it had not been lived on for decades. We established Story Ranch, a farm / wilderness setting that became a home to children’s camps, community gatherings, weddings, retreats, workshops and a small working farm. 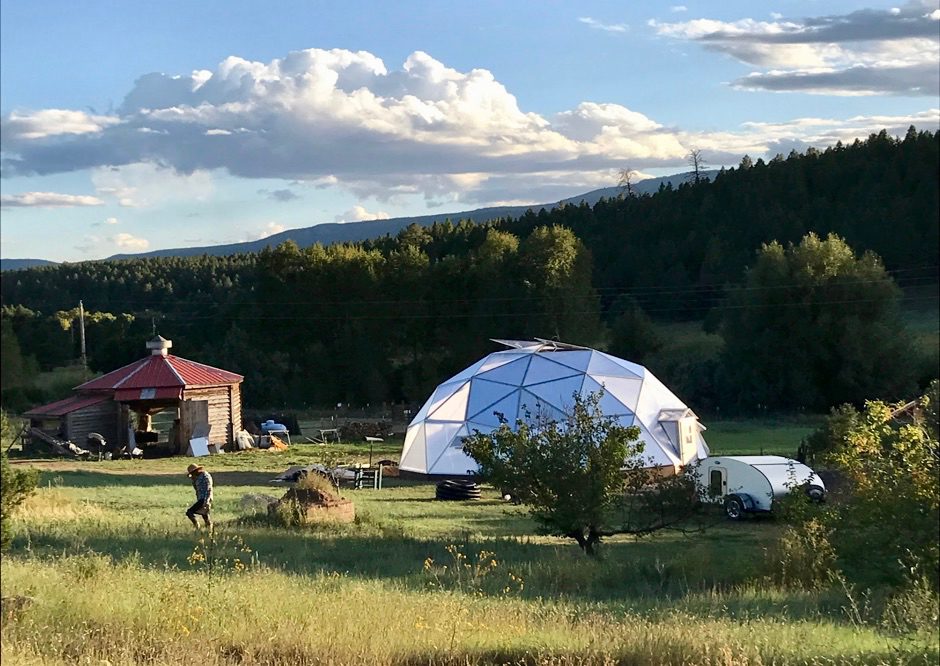 Friends began to be intrigued with the area and started investigating their potential to purchase land from Story Ranch or nearby properties. Processes were initiated multiple times to frame intentional community relationships. Shared ownership of land, shared vision of land usage, vehicle and tool sharing, and community gardens and animals were examined but nothing stuck. Over time, and as people bought adjacent land and developed their homesites, a consensus was reached that rather than wrestle with the illusive intentional community definition, we would declare ourselves a neighborhood. The only agreement we could make was that people would not have dogs in order to support and protect the abundant wildlife in this beautiful valley.

We are a neighborhood. Years ago I had found this designation to be disappointing. I had felt we had missed an opportunity to put into practice a vision that would be more intentional and collaborative. I have come to see this differently.

It is now 2020, and our neighborhood has raised children, held rituals and ceremonies, been injured and healed, shared food and drink, ebbed and flowed, lost a dear member to cancer, rafted, skied, grown food, camped, played music, and mused together.

We represent retired or not individuals whose work has been in education, health, the public sector, real estate, the arts, therapy, activism and the legal system. We are mostly white, privileged, educated, and progressive with strong pulls to the wild and to the farmed. Some are here part time but most are here year round. We number about a dozen with eight homesites. There are others of similar orientation nearby with whom we have developed close relationships.

We are a neighborhood, a strong neighborhood with deep roots, shared stories, and good will. It’s by no means perfect, but I think Mr. Rogers would have been appreciative. 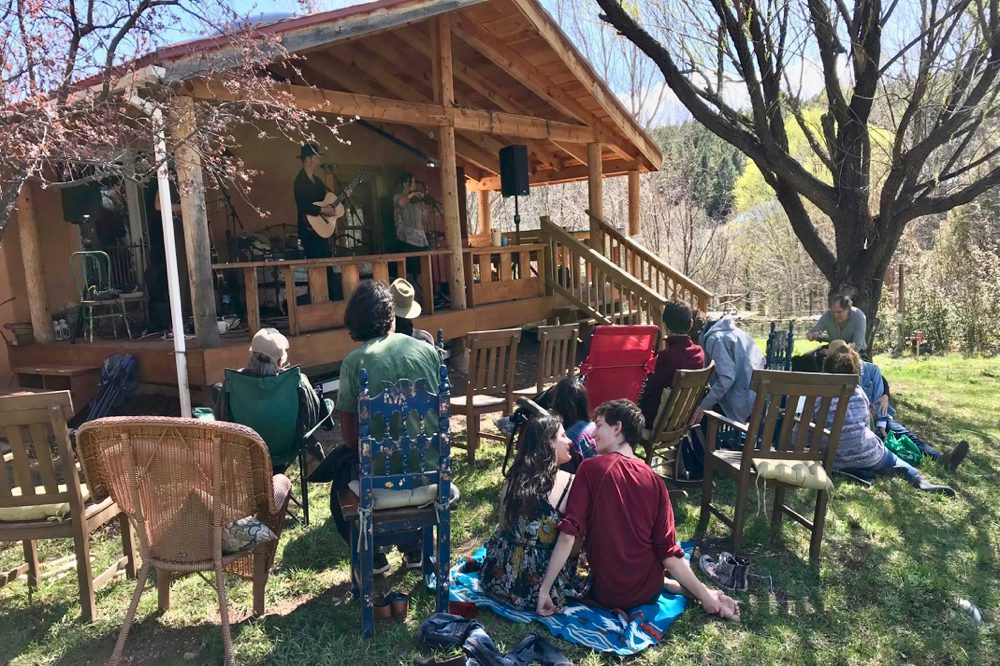 Covid-19 crept into our neighborhood as it did with most in the world. No one in our valley has yet contracted the virus but its presence has moved us into a new world, one that is leading us to potentially rethink, reimagine our relationship to community. We are now zooming regularly with each other, checking in with each other, sharing food and resources, listening deeply to one another, supporting health challenges, taking time to show our caring, exploring future scenarios, and showing up.

The pandemic has exposed the fragility of a world that is dominated by mega systems of agricultural practices, energy production, wasteful water practices, global transportation of goods and services, and health care. This virus is teaching us that resilience and local interdependence may be the answer to not only intermittent disruptions and systematic failures that will become more likely with the climate crisis but the social and spiritual dimensions of our lives.

The beauty of the solutions to systems fragility may lie in redefining and reimagining a New Community where our neighborhood can weave together sustainable elements that secure food, energy, water and shelter. Each act of putting into place new and traditional agricultural practices, securing energy independence, strengthening caring social relationships, supporting healthy lifestyles, renewing creative and artistic practices and honoring “all our relations” is affirming life and building community. Are we up to this challenge and opportunity? Will we create a New Community?

One last observation; there are now four dogs in our neighborhood.