As the pandemic builds, most people, led by government officials and policy wonks, perceive the threat solely in terms of human health and its impact on the national economy. Consistent with the prevailing vision, mainstream media call almost exclusively on physicians and epidemiologists, financiers and economists to assess the consequences of the viral outbreak.

Fair enough — rampant disease and looming recession are genuine immediate concerns; society has to cope with them.

That said, we must see and respond to the more important reality.

However horrific the COVID-19 pandemic may seem, it is merely one symptom of gross human ecological dysfunction. The prospect of economic implosion is directly connected. The overarching reality is that the human enterprise is in a state of overshoot.

We are using nature’s goods and life-support services faster than ecosystems can regenerate. There are simply too many people consuming too much stuff. Even at current global average levels of consumption (about a third of the Canadian average) the human population far exceeds the long-term carrying capacity of Earth.

When will the media call on systems ecologists to explain what’s really going on? If they did, we might learn the following:

That the current pandemic is an inevitable consequence of human populations everywhere expanding into the habitats of other species with which we have had little previous contact (Homosapiens is the most invasive of “invasive species.”)

That contagious disease is readily propagated because of densification and urbanization — think Wuhan or New York — but particularly (as we may soon see) because of the severe overcrowding of vulnerable people in the burgeoning slums and barrios of the developing world.

A population ecologist might even dare explain that, even when it comes to human numbers, whatever goes up must come down.

None of this is visible through our current economic lens that assumes a perpetually growing, globalized market economy.

Prevailing myth notwithstanding, nothing in nature can grow forever.

When, under especially favourable conditions any species’ population balloons, it is always deflated by one or several forms of negative feedback — disease, inadequate habitat, self-pollution, food shortages, resource scarcity, conflict over what’s left (war), etc. All of these various countervailing forces are triggered by excess population itself. 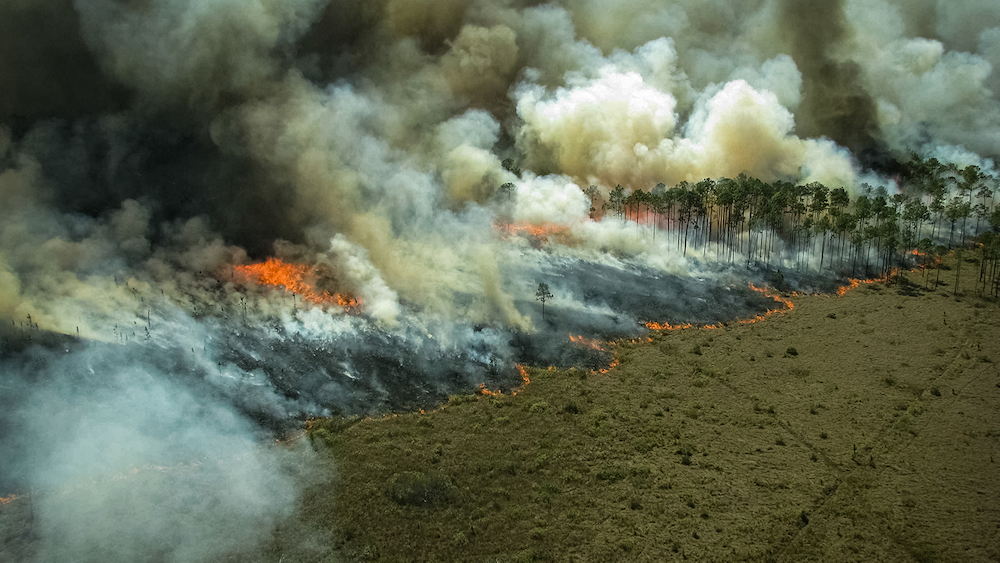 Human-set fires in the Amazon: The current pandemic is an inevitable consequence of human populations everywhere expanding into the habitats of other species with which we have had little previous contact. Photo: Pixabay Creative Commons.

True, in simple ecosystems certain consuming species may exhibit regular cycles of uncontrolled expansion. We sometimes refer to these outbreaks as “plagues” — think swarms of locusts or rodents.

However, the plague phase of the cycle invariably ends in collapse as negative feedback once again gains the upper hand.

Bottom line? There are no exceptions to the first law of plague dynamics: the unconstrained expansion of any species’ population invariably destroys the conditions that enabled the expansion, thus triggering collapse.

Now here’s the thing. Homosapiens has recently experienced a genuine population explosion. It took all of human evolutionary history, at least 200,000 years, for our population to reach its first billion early in the 19th century. Then, in just 200 years, (less than one thousandth as much time) we blossomed to more than seven billion at the beginning of this century.

This unprecedented outbreak is attributable to Homosapiens’ technological ingenuity, e.g., modern medicine and especially the use of fossil fuels. (The latter enabled the continuous increases in food production and provided access to all the other resources needed to expand the human enterprise.)

The problem is that Earth is a finite planet, on which the seven-fold increase in human numbers, vastly augmented by a 100-fold increase in consumption, is systematically destroying prospects for continued civilized existence. Over-harvesting is depleting non-renewable resources; land degradation, pollution and global warming are destroying entire ecosystems; biophysical life support functions are beginning to fail.

With increasing real scarcity, growing extraction costs and burgeoning human demand, the prices for non-renewable metal and mineral resources have been rising for 20 years (from historic lows at the turn of the century). Meanwhile, petroleum may have peaked in 2018 signalling the pending implosion of the oil industry (abetted by falling demand and prices resulting from the COVID-19 recession).

These are all signs of resurgent negative feedback. The explosion of human consumption is beginning to resemble the plague phase of what may turn out to be a one-off human population cycle. If we don’t manage a controlled contraction, chaotic collapse is inevitable.

Which brings us back to society’s restricted focus on COVID-19 and the economy.

Listen to the news, to politicians and pundits in this time of crisis. You will hear virtually no reference to climate change (remember climate change?), wildfires, biodiversity loss, ocean pollution, sea level rise, tropical deforestation, land/soil degradation, or human expansion into wildlands.

Nor is there a hint of understanding that these trends are connected to each other and to the pandemic.

Discussion in the mainstream focuses doggedly on defeating COVID-19, facilitating recovery, restoring growth and otherwise getting back to normal. After all, as Gregory Bateson has written, “That is the paradigm: Treat the symptom to make the world safe for the pathology.”

Let that sink in: “Normal” is the pathology.

But returning to “normal” guarantees a repeat performance. There will be other pandemics, potentially worse than COVID-19. (Unless, of course, some other form of negative feedback gets to us first — as noted, there is no shortage of potential candidates.)

Consider the present pandemic as yellow flagging for what nature may yet have in store. Earth will have its revenge. Unless, to avoid full-on negative feedback, we stand back and re-focus. This means consciously overriding humans’ natural myopia, thinking generations ahead and abandoning our perpetual growth narrative.

Surely the time has come to reconsider what seems to have become a “self-terminating experiment with industrialism.”

To save itself, society must adopt an eco-centric lens. This would enable us to see the human enterprise as a fully dependent subsystem of the ecosphere. We need to script a new cultural narrative consistent with this vision. We must reduce the human ecological footprint to eliminate overshoot — below is a curve that really needs flattening. 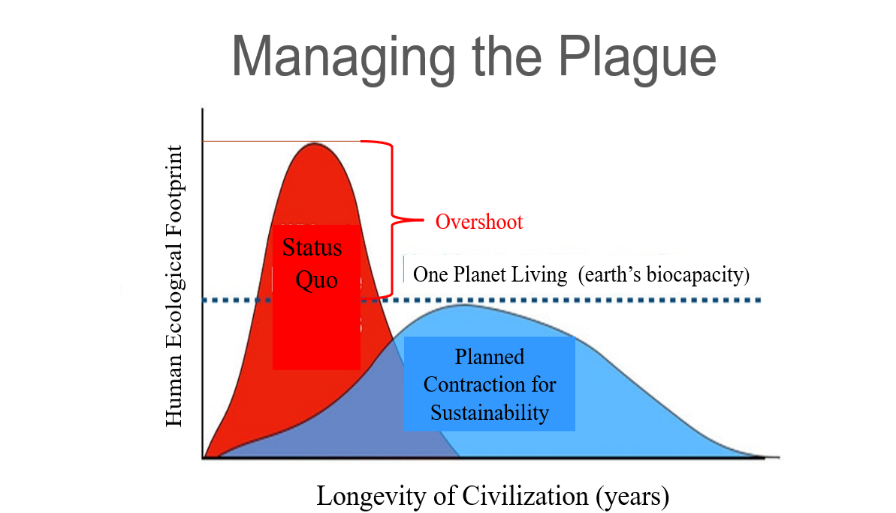 A different curve to flatten: Let’s start with a 50-per-cent reduction in energy and material throughput, as implicit in the 2015 Paris climate accord. Provided by William Rees.

Our cultural reset cannot end there. As medical supplies and equipment run out and supply chains stretch or break, people everywhere are becoming conscious of hazards associated with today’s increasingly unsustainable entanglement of nations.

We will have much to celebrate if community self-reliance, resilience and stability are once again valued more than interdependence, efficiency and growth. Specialization, globalization and just-in-time trade in vital commodities have gone too far. COVID-19 has shown that future security may well reside more in local economic diversity. For one thing, countries under stress may begin hoarding vital commodities for domestic use. (As if on cue, on April 3, Donald Trump, president of Canada’s biggest trading partner, requested 3M to suspend exports of badly-needed respirator face masks to Canada and Latin America.) Surely we need permanent policies for the re-localization of vital economic activities through a strategic approach to import displacement.

We might also build on the better side of human nature as ironically invigorated by our collective war on COVID-19. In many places, society’s fear of disease has been leavened by a revived sense of community, solidarity, compassion and mutual aid. Recognition that disease strikes the impoverished hardest and that the pandemic threatens to widen the income gap has renewed calls for a return to more progressive taxation and implementation of a national minimum wage.

The emergency also draws attention to the importance of the informal care economy — child rearing and elder care are often voluntary and historically subsidize our paid economy. And what about renewed public investment worldwide in girls’ education, women’s health and family planning? Certainly individual actions are not enough. We are in a collective crisis that demands collective solutions.

To those still committed to the pre-COVID-19 perpetual-growth-through-technology paradigm, economic contraction equates to unmitigated catastrophe. We can give them no hope but to accept a new reality.

Like it or not, we are at the end of growth. The pandemic will certainly induce a recession and possibly a global depression, likely reducing gross world product by a quarter.

There are good reasons to think that there can be no “recovery” to pre-COVID “normal” even if we were foolish enough to try. Ours has been a debt-leveraged economy. Thousands of marginal firms will be bankrupted; some will be bought up by others with deeper pockets (further concentrating wealth) but most will disappear; millions of people will be left unemployed, possibly impoverished without ongoing public support.

The oil patch is particularly hard hit. Canada’s tarsands producers who need $40 a barrel to survive are being offered one tenth that, less than the price of a mug of beer. Meanwhile, oil production may have peaked and older fields upon which the world still depends are declining at a rate of six per cent per year.

This heralds a future crisis: GWP and energy consumption have historically increased in lock-step; industrial economies depend utterly on abundant cheap energy. After the current short-term demand-drop surplus dries up, it will be years (if ever) before there is adequate new supply to replicate pre-pandemic levels of global economic activity — and there are no adequate “green” substitutes. Much of the economy will have to be rebuilt to size in ways that reflect this emergent reality.

And herein lies the great opportunity to salvage global civilization.

Clearing skies and cleaner waters should inspire hopeful ingenuity. Indeed, if we wish to thrive on a finite planet, we have little choice but to see the COVID-19 pandemic as preview and our response as dress rehearsal for the bigger play. Again, the challenge is to engineer a safe, smooth, controlled contraction of the human enterprise. Surely it is within our collective imagination to socially construct a system of globally networked but self-reliant national economies that better serve the needs of a smaller human family.

The ultimate goal of economic planning everywhere must now turn to ensuring that humanity can thrive indefinitely and more equitably within the biophysical means of nature.

By William E. Rees, originally published by The Great Transition