It’s worth remembering how acts of commoning can have lasting consequences, including legacies that we may not even remember. Bernard Marszalek, who has lived in Berkeley, California, since the 1980s, brought to my attention the near-forgotten history of Ohlone Park in his city. The park is a fairly large patch of greenery that a forgotten corps of enterprising commoners in effect gifted to later generations. 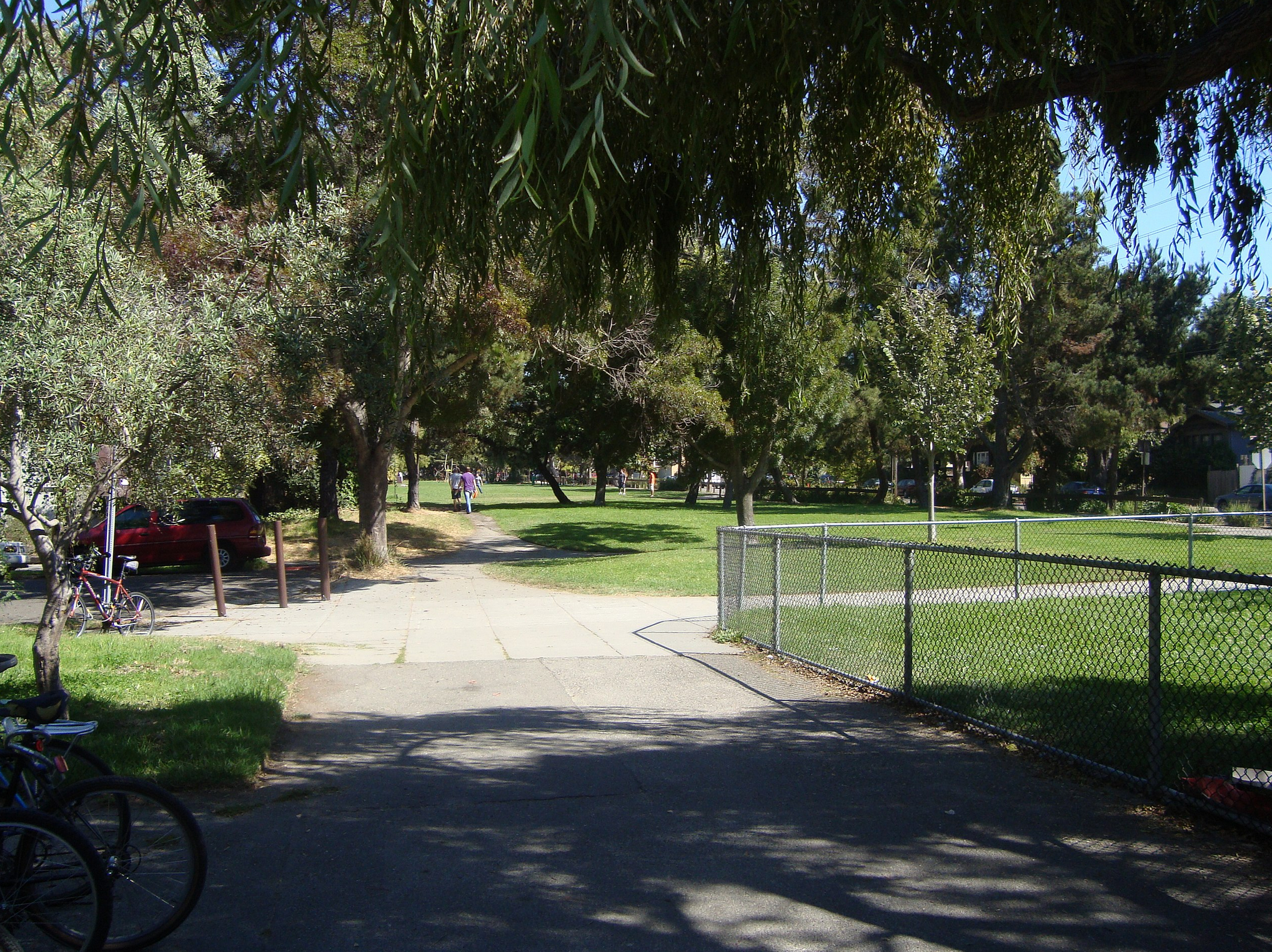 The time was 1969, and the Bay Area Rapid Transit (BART) authority had demolished 200 Berkeley homes in order to dig a trench for an underground portion of their rail system. As Marzalek tells it, “BART then filled in tons of dirt on top of the tube it built and in this way ‘reclaimed’ the land that it bulldozed. It strip-mined Berkeley to submerge the trains and above left four blocks along Hearst Avenue a barren, ugly field of dust in summer and mud in winter. An eyesore. BART officials said that they didn’t have funds (or mental bandwidth?) to develop it, that is, monetize it.”

A year later, writes Marzalek in his history of Ohlone Park, another unsightly mud pit emerged when the University of California razed a square block of homes with plans for building student housing. But it ran out of money, leaving another eyesore. “The south campus community believed that the university wanted to remove a dissident community of artists, lefties, and hippies that had lodged in the affordable housing on that site,” he wrote.

What happened next to this empty square block is quite remarkable, as Marszalek notes:

“….a rag-tag bunch of malcontents occupied the mud lot and began planting trees and shrubs and named their new area People’s Park. University officials had no opportunity to negotiate, as the Republican mayor of Berkeley, Ed Meese, the District Attorney of Alameda County, and the Governor of California, Ronald Reagan went ballistic. How outrageous to imagine a forsaken lot transformed into a site of communality and pride by a bunch of dope fiends and commies!

Governor Reagan, just elected to office, saw the garden as a direct affront to his Law and Order campaign promise. The mayor of Berkeley needed no excuse to unleash his racist police force. On May 15, 1969, DA Meese likewise sent in Sheriff deputies to viciously attack the park defenders.

A police riot ensued. Deputies with buckshot-loaded rifles shot indiscriminately into the crowds. In the battle that lasted into the night, one bystander on a roof nearby was killed, another blinded and over 100 wounded.

Several days later, after martial law was declared and several thousand National Guardsmen entered the city, another bit of assaulted landscape, not two miles from People’s Park, beckoned the imaginations of the outraged residents. It was hardly surprising that they tried to build their vision of communalism on this abandoned land. It was in the air, once the tear gas cleared.

But more than gardening took place. What was an ugly sliver of dirt became a commons for partying, music and potlucks. But not without overcoming, several times, the devastation caused by assaults of the guardians of law and order.

On one occasion late at night, young tree trunks were snapped and broken and plants trampled by the armed Midnight Raiders (the police). And at another time, in broad daylight, the cops trundled armfuls of plants into paddy wagons. They arrested the bushes and flowers!

After each attack the people came back and replanted. The neighbors near the park and their allies were galvanized for the long haul. And they partied some more. The park over time became a place to drop off stuff for reuse. Car seats became garden furniture. Steel tubing was transformed into playground swings, a large jungle gym and other imaginative, playful structures.

A stone and mortar water fountain was installed after a permit was obtained from the water utility and when a period of drought ensued and the utility cut off the water, a well was dug to irrigate the plants and trees.

After ten years of various haggles over use of the land, a supportive state legislator was elected, and using a cleverly worded proposal written by park neighbors, managed to pass a law that forced the sale of BART land to the city.

In honor of the First People, the park was officially recognized in 1979 as Ohlone Park, the first and only park created by citizen initiative in Berkeley. The park stands today as a successful land occupation. A rarity anywhere.

The park today is mostly grass but also includes pedestrian and bicycle paths, a basketball court, and a baseball field. There is also a dog park, the first off-leash dog park in the US.

It is worth noting that the Berkeley commoners’ achievement, while unusual, is not unique. In the 1980s, New York City residents created dozens of community gardens on vacant lots throughout the city.  As the gardens began to make neighborhoods more attractive, raising property values in adjacent areas, then-Mayor Giuliani decided that the City should sell the formerly neglected lots to real estate developers. The commons must be enclosed!

In effect, the residents who had brought life, greenery, and social care to the neighborhood were now dismissed as mere squatters. The value they had generated would be captured by private real estate developers, with the City’s active complicity. While many of the gardens were ultimately preserved — thanks to community outrage, the Trust for Public Lands, and donations from folks like Bette Midler — many were sold off, despite the city’s budget surplus at the time.

Musing on the history of Ohlone Park in the 1960s and 1970s, Marszalek writes that “an argument could be made that the notion of the commons eclipses the communes of the counterculture. If the hippies and fellow travelers had explicitly recognized that their various collectives had an historic commonality, maybe a stronger political force of solidarity would have taken shape. A force, that is, to sustain a concerted fight to keep rents low and funding high for countercultural subversions.”

As always, history holds a lot of inspiration and guidance for contemporary struggles.