The footage is unpleasant to watch: thousands of bees writhe, disoriented, on the ground in front of their hive. The dead bodies of thousands more lie beneath them.

But the smell, said beekeeper Aldo Machado, is even worse.

“Dead bees smell like dead rats,” he said. “The smell is very strong, it really is. It’s like any other meat.”

Half a billion bees are estimated to have died from December 2018 to January 2019 in southern Brazil. Machado, vice-president of Rio Grande do Sul’s beekeeping society, has been hearing reports of die-offs since 2013.

Machado sent samples of his bees for analysis, which showed that they were contaminated with an insecticide called fipronil, commonly used to control ants and termites on soy crops.

Brazil – home to as much as 20 percent of the world’s remaining biodiversity – is a heavy user of pesticides. An analysis by Unearthed and Public Eye of more than $20bn of global agrochemical sales data for 2018 showed Brazil was the world’s biggest consumer of pesticides classed as seriously hazardous to health or the environment. These hazards included acute toxicity to humans, chronic exposure risks like cancer or reproductive failure, and high toxicity to bees.

Brazil has long had agribusiness-friendly policies, thanks in part to its powerful congressional farming lobby, known as the Bancada Ruralista, and in part to a decades-long push to leverage its vast natural resources into global influence.

“We have interference from the government, which has many people from agribusiness within it,” Wanderlei Pignati, Professor at the Centre for Environmental Studies and Occupational Health at Mato Grosso’s Federal University, told Unearthed.

Watch this video in Portuguese here.

While other countries move to ban pesticides, Brazil has doubled down on its laxity towards agrochemicals. During Bolsonaro’s first year in office, a record 503 new pesticides were approved, 20 percent of which are highly toxic. Amongst them is Sulfoxaflor, known to be fatal to bees. Last July, ANVISA, Brazil’s National Health Monitoring Agency, moved the classification goalposts so far as to declare the sole criteria designating a pesticide as “extremely toxic” is risk of death.

Pignati says efforts to ban dangerous pesticides are shut down from above.

“They say ‘if you ban this, if you ban that and others, you will reduce agricultural production.’ It’s the only thing they are concerned about,” Pignati said. “They are not concerned with the pollution of food, the contamination of rivers, of blood, of breast milk.”

We used to very easily find bees in the Cerrado, collect their honey. When we see bees now, it is on the floor, in pain

Fipronil is also linked to bee deaths in South Africa, and was banned in the EU after causing mass honeybee mortalities in France in the 1990s.

Moreover, Sattler told Unearthed, the real number was probably much higher. A further 32 percent showed similar signs of intoxication, but at levels too low for definitive diagnosis.

“Maybe the beekeepers…took a long time to collect the samples, and they were compromised,” Sattler said.  “We certainly have around 80 to 90 percent of these cases of acute mortality, which can be attributed in some way to the indiscriminate use of pesticides.”

Brazil’s vast plantations, agribusiness-friendly policies and tropical fecundity have made it an agricultural superpower and also, our data reveals, the world’s largest user of highly hazardous pesticides.

Fipronil is commonly used in Brazil on soya monocultures, which are an intense driver of the consumption of pesticides that threaten to severely compromise the very pollinators on which other forms of more sustainable agriculture depend.

According to Unearthed and Public Eye’s investigation, almost two thirds of Brazil’s 2018 spending on highly hazardous pesticides went on soya plantations, grown to supply global demand for animal feed. Not all of these products are harmful to bees, but many are.

Soya’s heavy pesticide load is partly a question of scale – 36.9m hectares, an area greater than that of Germany, is planted with the bean – and partly the dominance of transgenic soybeans, Larissa Bombardi, professor of geography at São Paulo University, told Unearthed.

“More than 90 percent of soya production in Brazil is with transgenic soya, genetically modified to be tolerant to herbicide,” she said.

Brazil authorised Monsanto’s glyphosate resistant “Roundup Ready” soybean in 2003, and studies have shown that in the subsequent years pesticide use on soya increased three-fold. 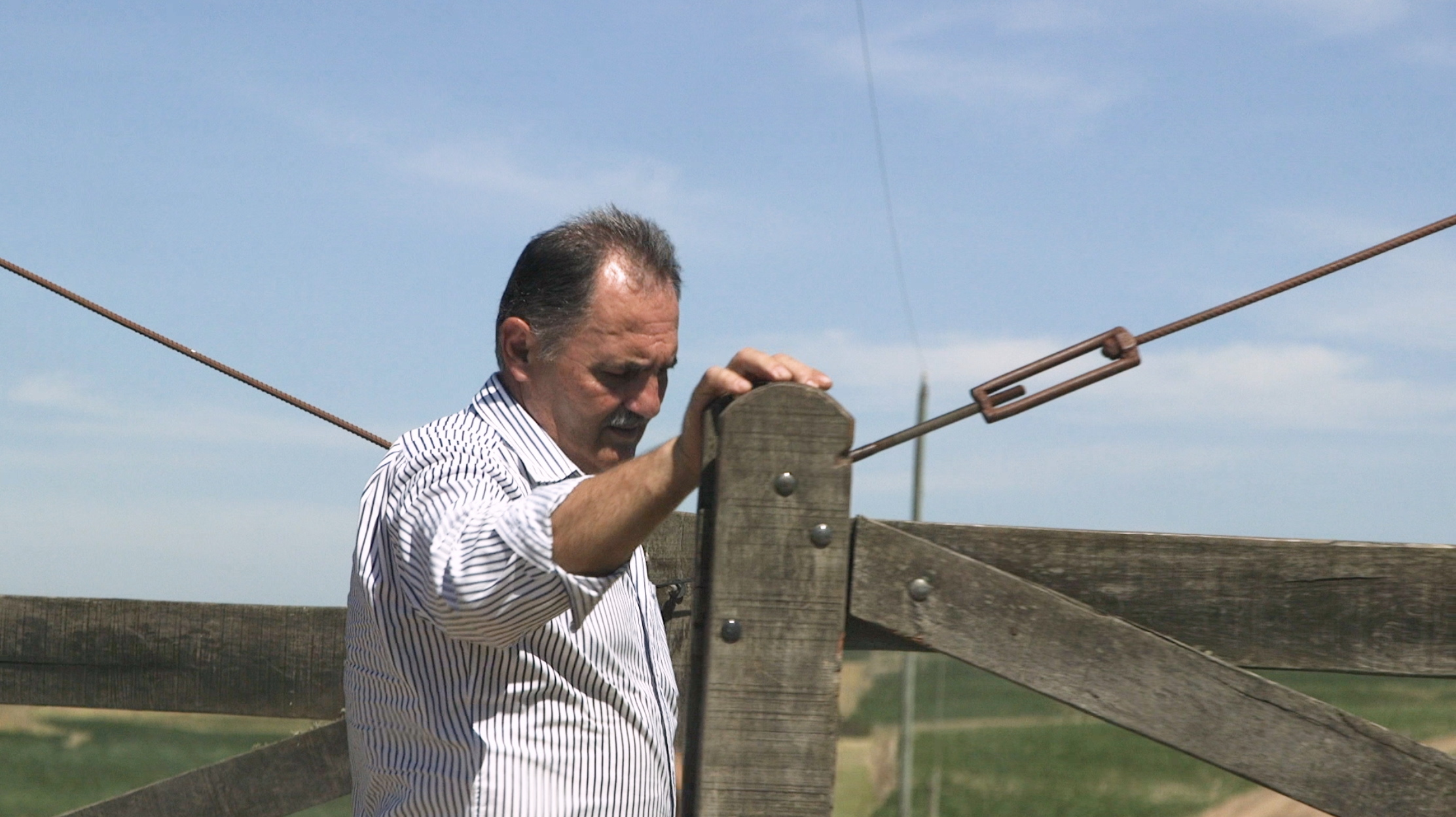 Aldo Machado, vice-president of the local beekeepers association, opens a gate to one of the sprawling soya plantations in the area of São Gabriel, Rio Grande do Sul. Photo: Sofia Perpétua / Unearthed

Canaries in the coal mine

There is scant detailed data on the changing populations of most insects (although an important study released last year estimated 40 percent of insect species are declining). But because they are cultivated, honeybees – apis mellifera – provide data into pollinator health that is otherwise difficult to come by.

“If the bees are dying, I would say they are sentinels,” said Professor Bombardi. “They are like a thermometer of what happens to other insects.”

We had a case here in Rio Grande do Sul, which resulted in about seven thousand meters of bee deaths from a single source of contamination

This is extremely concerning, said Bombardi, as Brazil’s extravagant biodiversity depends on insects.

Many of Brazil’s indigenous people, with lifestyles attuned to shifts in their environment, say the correlation between the advent of monoculture farming and the winnowing of biodiversity has been conspicuous.

“We used to very easily find bees in the Cerrado, collect their honey… When we see bees now, it is on the floor, in pain,” Antônio Veríssimo da Conceição, leader of the Tocantins’ Apinajé people, told Unearthed. “We would say when the butterflies fly from sunset to sunrise, they are going to seek rain…. we don’t see them any more.”

These losses cause knock-on effects further up the food-chain.

“We also don’t see swallows any more, where we used to see enormous flocks… maybe five thousand swallows flying every year on their journey.”

Brazil’s wild bee species, of which Rio Grande do Sul alone has some 300 species, are particularly at risk, said Professor Sattler. They have a range of about a kilometre, to apis mellifera’s three to four kilometres.

“When a colony of apis dies, caused by pesticides, in that roughly one thousand meters, all colonies of native bees also die,” Sattler said. “No one knows how many have died.”

The instinct of bees to plunder contaminated honey from unprotected hives then produces a ripple effect every thousand metres, as the contamination spreads from hive to hive.

“We had a case here in Rio Grande do Sul, which resulted in about seven thousand meters of bee deaths from a single source of contamination.”

The full scale and impact of pesticide contamination is still unknown. Pesticides have been found in drinking water, in Amazon river turtles, in tapirs, in breastmilk. The effects on human health in Brazil are documented and getting worse, with poisonings increasing, and experts warning of a looming chronic disease crisis.

“In 10 years, acute intoxication has doubled, and there are regions in which cancer and [fetal] malformation have tripled, quadrupled,” said Professor Pignati. “Which regions? Those who use pesticides the most.”

With pesticide use in Brazil increasing – Brazil’s agricultural census showed a 20 percent rise in the number of farmers using agrochemicals from 2006 to 2017 – this is unlikely to improve any time soon. Nor is it likely that production of soya, and Brazil’s other commodity crops, will slow down in the immediate future. Deforestation alerts for January doubled in January compared to a year ago, to 280 square kms. 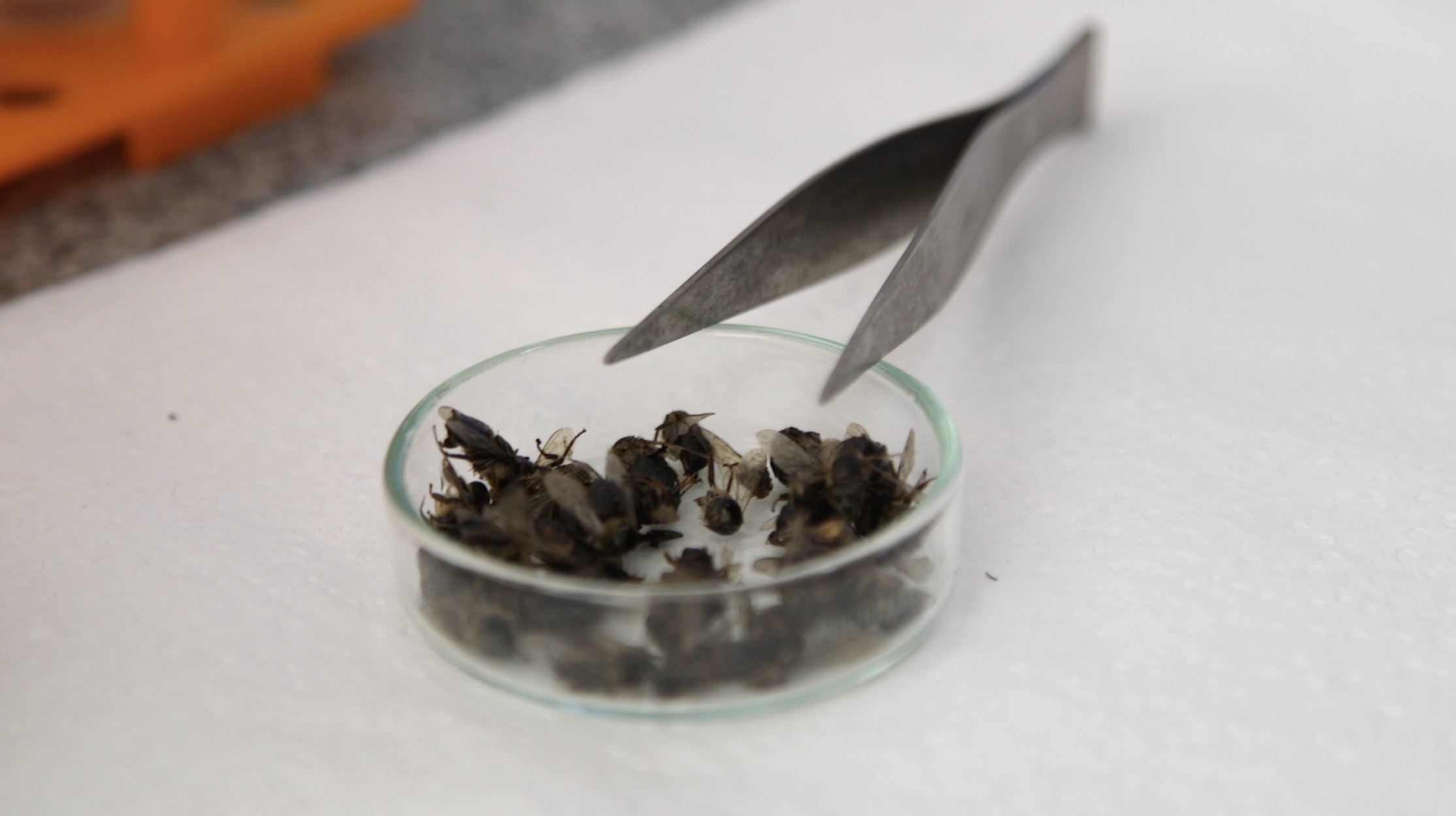 Analysis of dead bee samples at a laboratory in Santa Maria, Rio Grande do Sul, will determine whether pesticides are present, and if so, which pesticide. Photo: Sofia Perpétua / Unearthed

Even so, many apiculturists  believe that farmers, even of monocultures, ought to be their natural allies.

Machado says that the vast tracts of soya flowers can be a boon for honey production, and that the additional pollination provided by honeybee colonies increases soya productivity too. The problem occurs, he says, when through ignorance or indifference farmers use too much insecticide, or apply pesticides when the soya is in bloom. Bees visit the flowers for nectar and pollen, but pick up pesticides too.

“They have no knowledge of the environmental damage they are causing themselves,” Machado said. “If the producer preserves the bees, he will improve his plantation, he will see a rise in production.”

“What needs to exist is more dialogue between farmers and beekeepers, it’s about awareness, training, guidance.”

But the United Nations’ special rapporteur on toxics, Baskut Tuncak, rejected the idea it was possible to use hazardous pesticides safely in Brazil.

“The stark reality is that Brazil has neither the governance systems nor the financial and technical capacity at present to provide a reasonable assurance they will be used safely,” he told Unearthed and Public Eye.

“The government simply cannot monitor what happens on hundreds of thousands of agricultural properties.”

For small honey producers, the impact of die-offs is felt keenly. Roberto Silva began keeping a few hives in Rio Grande do Sul in 2012, just before the deaths began. Two years ago, he lost fifty to fipronil poisoning, a significant chunk of his livelihood. But, like Machado, he still believes neighbouring soy farmers would be more careful, if they only knew the risks.

“Farmers are not aware of the loss they’re causing us,” he told Unearthed. “Apart from the damage they cause us, they also damage the environment,”

Even so, he’s not sure how much longer smallholders like him will survive.

“It’s difficult to see bees dying,” he said. “Each year it is getting more and more difficult to keep bees near soya plantations.”