Farmers working on an integrated system in a farm in Paraiba Valley, Sao Paulo. The system combine crops (a native species similar to potato and corn) with palm trees. Photo by Bruno Calixto/WRI Brasil

Climate change poses a real threat to farmers around the world. Agriculture is highly dependent on good weather, including high and low temperatures, rainfall, wind intensity, and many other variables. Estimates show that climate change might reduce global agriculture productivity by 17% by 2050.

For countries highly dependent on agricultural exports, like Brazil, this poses a real problem. Research shows that climate change-driven changes in rainfall patterns could severely reduce the harvest of healthy soybeans, one of Brazil’s biggest export commodities. Studies show that temperature increases could reduce by 95% the area suitable for producing coffee, an important export commodity, in three Brazilian states.

The good news is that farmers can adapt. A new working paper published by WRI Brasil, GIZ and the Brazilian Coalition on Climate, Forest, and Agriculture, with the contribution of several experts and scientists, presents evidence and proposes solutions for reducing climate change risks to farmlands. These include policies already in place in Brazil that are still relatively unknown, but that could be expanded in Brazil, or replicated in other countries.

Here is a selection of four sustainable ways farmers can produce more food and adapt to climate change at the same time. 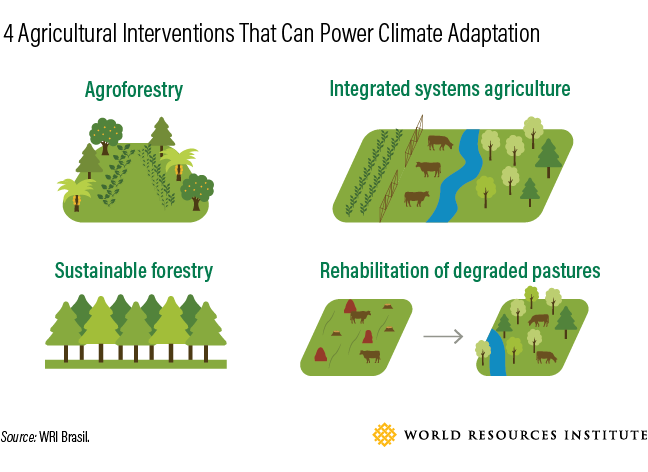 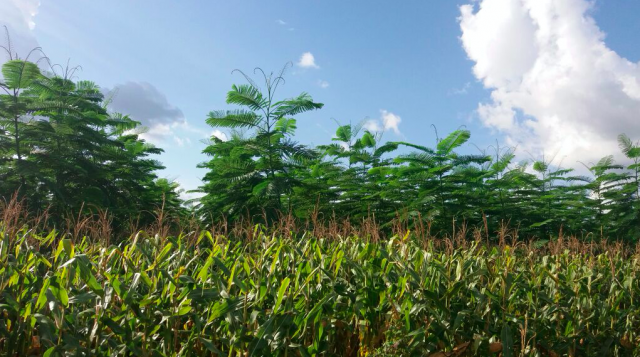 The more diverse an agricultural system, the greater its ability on average to adapt to climate change.

Integrated systems can also provide adaptation benefits. Our research showed integrated systems can make farms more resilient for every component analyzed: they can improve the local micro-climate by reducing local temperature and increasing precipitation and water availability; reduce the impact of extreme weather events on crops, livestock and other products; reduce soil erosion; improve productivity; and provide additional socioeconomic benefits by increasing the number of products farmers can produce for subsistence or to sell. 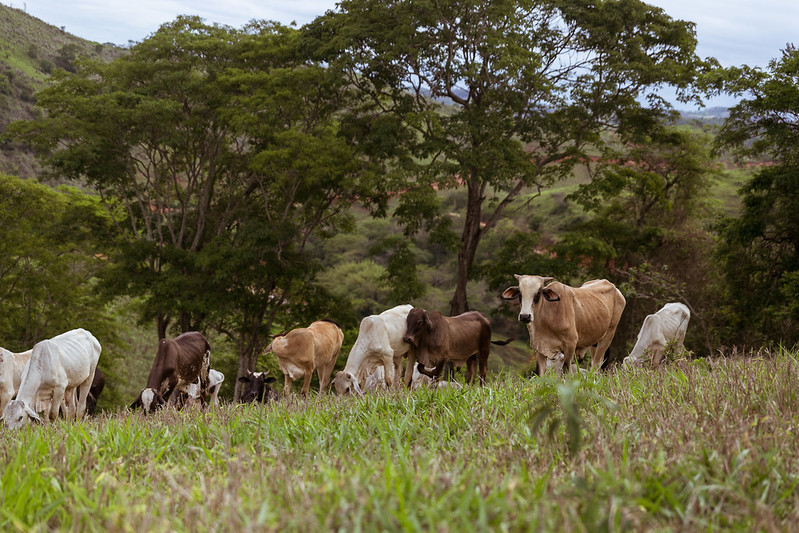 A farm where the pasture was reabilitated by Fazenda Ecologica using rotation and trees in the Minas Gerais countryside. Photo by Daniel Hunter/WRI Brasil

Pasture degradation is a major problem on Brazilian farms. Degraded lands are prone to erosion and so retain less water, have less nutritious grass for feeding animals and contribute to low-productivity livestock production.

There are several different ways to rehabilitate degraded pastures. The most conventional way involves applying fertilizers — but this is not always sustainable for farmers, as pastures usually require new fertilizer applications every four or five years. Degraded pasture can be more sustainably recovered by planting native forage or grass, or by introducing trees in the pasture to avoid soil erosion.

Rehabilitation of pasture can contribute to new, more sustainable ways of raising animals, as demonstrated by the work of Fazenda Ecológica. This combines grazing with trees to improve the health of the soil and the wellbeing of the animals while mitigating carbon emissions. 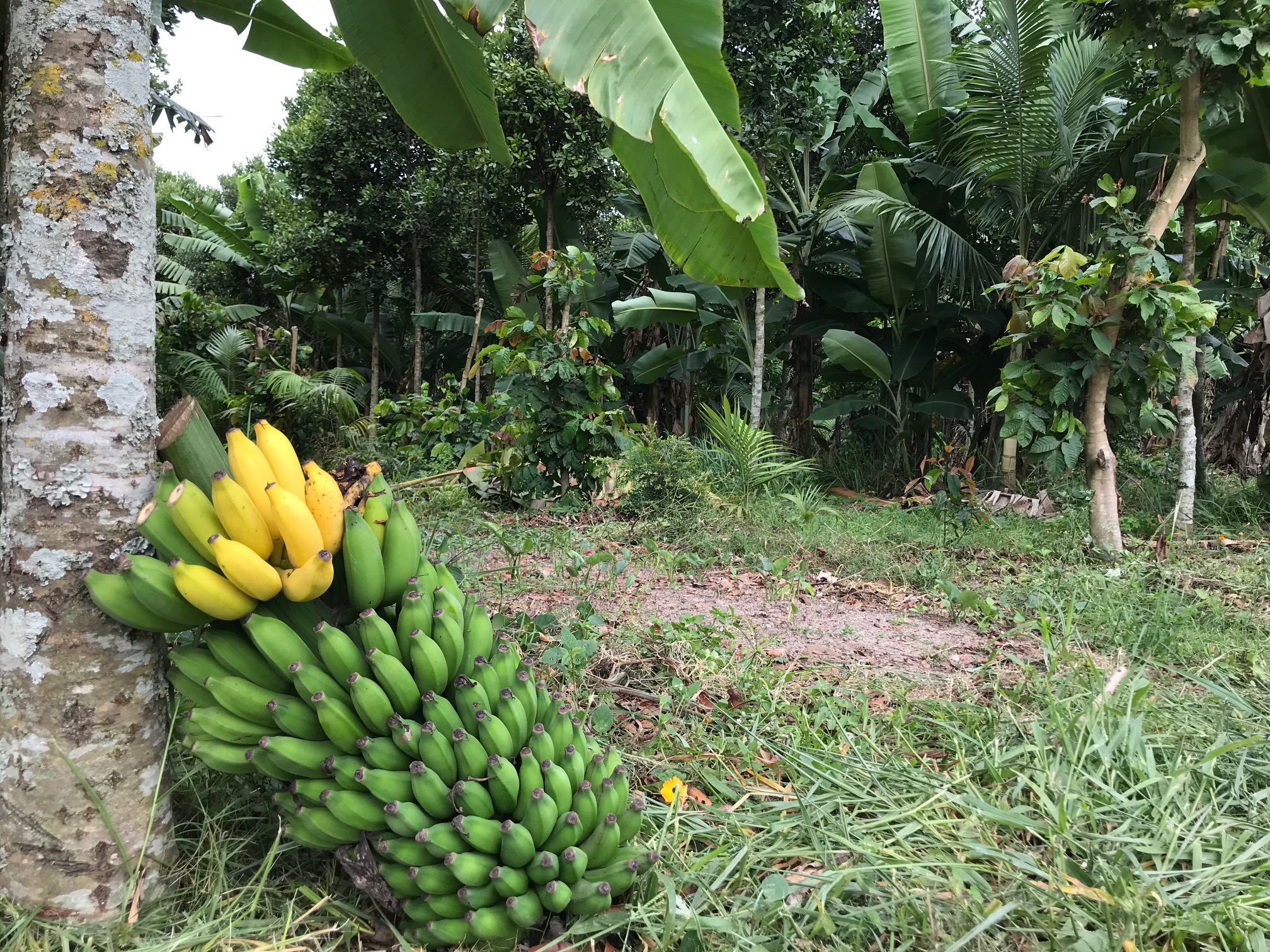 A two-year agroforestry system after the harvest of bananas on a farm in Paraiba Valley, Sao Paulo. Photo by Bruno Calixto/WRI Brasil

Agroforestry integrates trees and crops in an intentionally designed system. In an agroforestry system, every plant is selected for a particular purpose — species are selected so that plants will not compete but collaborate. This diversity of crops and trees allows the area to be productive all year long, so that small farmers can earn income in all seasons.

Cocoa is one commodity that benefits from agroforestry. Cocoa plants can grow better and be even more resilient under the shade of other trees. In Peru, a public-private partnership seeks to support 20,000 farmers who produce organic and/or high-quality cocoa in agroforestry systems on 58,000 hectares (about 143,000 acres). 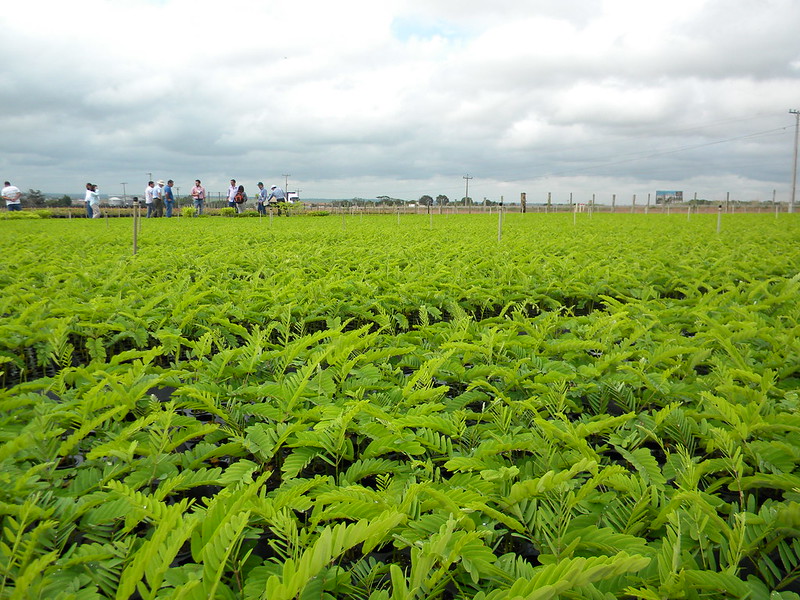 Seedlings for restoration with native species that have economic value in the south of Bahia, Brazil. Photo by Rachel Biderman/WRI Brasil

Trees planted sustainably offer environmental benefits—such as capturing greenhouse gases and protecting the soil—as well as the potential for economic gain through the commercialization of timber and non-timber forest products. A WRI report in 2018 highlighted fourteen companies that are investing in the business of planting trees.

Aside from being a good investment, sustainable forestry provides positive adaptation effects in almost every factor, with an important exception: the risk of forest fires could be increased. Densely planted trees and flammable species such as eucalyptus can cause fires to quickly spread.

Restoration and reforestation can be important tools for Brazilian farmers. The Brazilian Forest Code states that a portion of all rural properties must be covered with natural vegetation. Estimates indicate that 21 million hectares of Brazilian forest (51 million acres) are degraded or deforested and need to be restored. Part of this is in sensitive areas, where plantations are not allowed, but an important portion could be planted with sustainable forests to provide economic and environmental benefits. Planting native species for timber or other purposes could become an important source of income for farmers, while helping rural lands and production adapt to climate change.

Lessons for Brazil and the World

Practices like those described above provide a possible path for farmers around the world move to more resilient, low-carbon agriculture, so they can more sustainably produce enough food to feed the world while restoring the land. In a world where the impacts of climate change are already arriving, it is crucial to protect farms and farmers by finding a more resilient and sustainable model for agribusiness.

These examples of sustainable farming and land management practices are already included in two important Brazilian policies: The Low Carbon Agriculture Plan, known as Plano ABC, and the National Plan for Recovery Native Vegetation, known as Planaveg. Given the climate and economic benefits outlined above, financing for the agricultural models proposed by these plans should be expanded in Brazil.

Models like agroforestry and sustainable forestry plantations show a possible path for farmers around the world move to low-carbon agriculture and a more resilient agriculture, producing the necessary food to feed the world while restoring the land. In a world where the impacts of climate change are not just imminent but arriving, it is crucial to protect farms and farmers by finding a more resilient and sustainable model for agribusiness.