William Rees has challenged us to accept his “realistic facts” that renewable energy can’t end the climate crisis, and green energy is no substitute for fossil fuels. The only solution he sees is a deliberate contraction, but since “That’s not going to happen!” we face the possibility of global societal collapse. He argues in The Tyee that hundreds of millions of people must be persuaded “to risk wrecking their comfortable lives” to stave off the climate crisis.

Andrew Nikiforuk backs up Rees’s argument, arguing that the radical reduction in fossil fuel consumption needed to tackle the climate emergency “will radically change our economy and de-energize our way of life,” and “we must contemplate an energy descent for which our civilization doesn’t have an ethos or a vocabulary.”

Rees and Nikiforuk call this “realism,” but that’s a very loaded word. It says, “These are the facts: you can’t argue with them.” “Be realistic” invariably means “Stop being ambitious.” This kind of realism, applied to the climate and ecological emergencies, sends the message that we’re screwed.

Spiritually and emotionally it’s not in my makeup to accept defeat, so I have a problem with this, especially before we’ve even begun the rapid transition needed to tackle the climate emergency.

Take Copenhagen. It is a beautiful city whose biggest problem is the 1.6 million tourists who insist on visiting it every year. It has set a goal to be carbon neutral by 2025, while accommodating 100,000 additional residents and 20,000 additional jobs. Every day, instead of driving, 42 per cent of its residents ride 1.4 million kilometres to work or school on a bicycle, reducing their transportation emissions by 100 per cent.

Are Copenhageners complaining that cycling has wrecked their previously comfortable lives? Quite the opposite. More than half cycle because it is faster than driving, 50 per cent because it’s also easier, and 40 per cent because it’s also healthier. Only seven per cent cycle for climate or environmental reasons. For every additional kilometre cycled, the Danes save 1.34 Danish crowns (25 cents), while for each additional motorist they lose 5.64 crowns ($1.50) because of all the hidden costs.

What of the other 58 per cent of travellers who don’t bike? The city’s metro line places 85 per cent of Copenhageners within 650 metres of a Metro station, and Denmark has a great railway network. Transit can convey 10,000 to 25,000 people an hour, compared to 1,600 motorists on the same stretch of road.

What of Copenhagen’s cars? New electric cars have a range of 400 kilometres, so we can cross range anxiety off the list, and by 2025 they will cost the same as a conventional car. There’s an annual saving of $1,400 on energy, and for our KIA Soul, an annual servicing cost of just $59.95. After 10 years the battery may need replacing, but the rest of the car will be fine, and a new battery may cost around $2,000. There’s no wrecking of comfortable lives happening here: if you speak to an EV owner, it’s quite the opposite.

It’s true that Copenhagen’s calculations don’t include the city’s imported emissions: it’s tough to do that. But conversely, Copenhagen’s exports will be zero emissions.

But that’s not what we need. An EV uses four times less energy than a conventional vehicle, enabling 75 per cent de-energizing. When a city switches to 50 per cent cycling, 25 per cent electric transit and 25 per cent electric cars, its energy descent for personal transportation will be over 90 per cent, while its residents will enjoy a more peaceful, quiet and less stressful city with zero air pollution, bringing huge health care benefits. What’s not to like?

But ah, the “realist” responds, how do you make all those electric cars and buses? First, you assume 100-per-cent recyclability for all vehicles, including steel and aluminum. Next, you assume a far longer life for each vehicle. EVs have so many fewer moving parts that they are good for 800,000 kilometres. For steel or glass, you look to the recently announced Heliopolis technology, which uses solar energy to raise heat to above 1,000 degrees Celsius, or the Swedish company SSAB’s use of electric arc furnaces powered by 100-per-cent renewable energy and fossil-fuel-free hydrogen. Tesla’s Gigafactory near Reno, Nevada, with a planned capacity to produce battery packs sufficient to power 1.5 million Tesla EVs a year, has a full solar roof to power it.

What about trucks and heavy machinery? Electric pick-ups are coming, and electric semis with up to 800 kilometres range, achieving a 75 per cent energy descent. 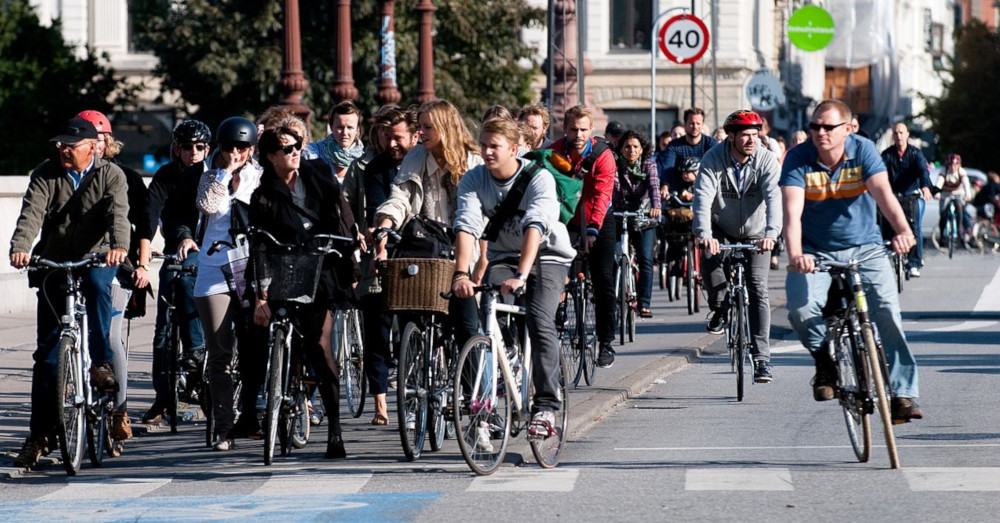 Are the 42 per cent of Copenhageners who cycle to work or school complaining that it’s wrecked their comfortable lives? No. Most say they do so because it’s faster, easier or healthier than driving, and only seven per cent for environmental reasons. Image via Wikimedia.

What about buildings, which generate nearly 40 per cent of global greenhouse emissions? New buildings designed to the Passive House standard offer a comfortable and affordable 90 per cent energy descent, eliminating the need for any heat source apart from a small heat-recovery ventilator. In Brussels, every new building, large or small, has been required to be Passive House design since 2015.

What about existing buildings, two-thirds of which will still be operating by 2050? Brussels also requires Passive House retrofits, reaching the same ultra-low energy standard.

Existing homes can also switch to heat pumps, enabling a 66-per-cent energy descent. Sustainable Gabriola has spearheaded the adoption of heat pumps on the island to address air pollution from wood stoves, persuading 700 households to make the switch. In Nelson, B.C., where the average residence consumes 12 MWh of electricity a year, Andy Shadrach’s family has achieved a perfectly comfortable 75-per-cent energy descent to 2.73 MWh by investing in efficiency and solar.

What about all the concrete and steel that many buildings need? Just Biofiber hempcrete building blocks last for 500 years. They are super fire-resistant, and they absorb carbon dioxide instead of releasing it, as concrete does. Each block will sequester 6.5 kg of CO2, so a 2,000-square-foot house needing 1,110 blocks will sequester seven tonnes of CO2 over its life.

Taken together, walkable cities, cycling, transit, EVs, heat pumps and Passive Homes offer an 80 to 90-per-cent energy descent without a single comfortable life being wrecked. So enough with the fear mongering.

What about solar, which Rees says lasts not much longer than 15 years and has declining efficiency? Yes, solar panels lose 0.5 per cent of their initial efficiency per year, but they will still be running 50 years later with only a 25 per cent loss of efficiency, and new solar panels are steadily increasing in efficiency.

They do require space; it’s true. Nikiforuk gives the example of Morocco, where the world’s largest solar project generates power for a million people and occupies 25 square kilometres. Providing power like this for 35 million Moroccans would need 875 square kilometres. It sounds like a lot, but it’s only 0.13 per cent of Morocco’s land. Morocco, which consumed 33.5 TWh of electricity in 2014, also has wind energy potential of 8,000 TWh along its Atlantic coast. That’s 200 times more electricity than they currently use. The International Energy Agency reports that offshore wind turbines alone could provide 18 times more electricity than the world uses. Yes, after 25 years the blades and rotors wear out, needing replacement at up to 20 per cent of the original cost, but in the process of repowering they can be fitted with higher capacity turbines, increasing their output. 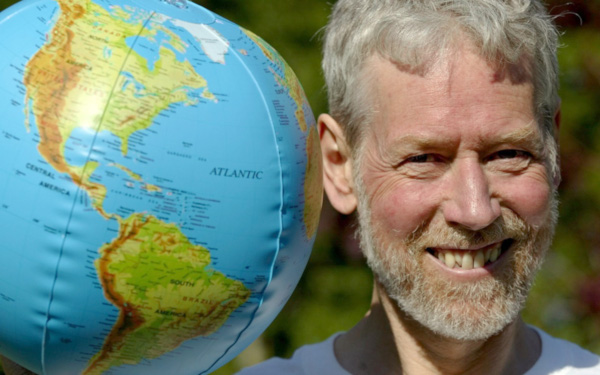 Author Guy Dauncey: ‘Spiritually and emotionally it’s not in my makeup to accept defeat before we’ve even begun the rapid transition needed.’

Rees is right with the data that wind and solar are only keeping up with the increasing global demand, and that the use of climate-disastrous fossil fuels is still increasing. I don’t dispute the need for a rapid acceleration of renewables, coupled with a rapid, regulated phase-out for coal, gas and oil.

We need to switch from being “realistic,” implying the need to accept defeat, to being ambitious, bringing a determination to do whatever it takes. We need to stop spreading the fear that the energy descent needed to tackle the climate emergency will wreck people’s comfortable lives, or that it is something “for which our civilization doesn’t have an ethos or a vocabulary.” Tell that to the Copenhageners.

Rees has 11 requirements for an effective Green New Deal. Item three refers to the impossibility of a quantitatively equivalent energy transition, but that’s not what’s needed.

Others are easy to agree with. Item four calls for lifestyles that use half the energy we use today. Copenhageners would say “No big deal. We’re living on 90 per cent less energy and loving it.”

When we frame our thoughts around the negative language of “energy descent” and “deliberate contraction,” we confirm people’s fear that solutions to the climate and ecological emergencies will wreck their comfortable lives. This is so harmful. It’s like a sports coach telling her athlete that winning a medal will ruin her family life, and besides, it’s impossible. Is this really the message we want to deliver to the millions of young climate strikers who are packing the streets demanding urgent climate action?

We really don’t benefit from unrealistic dooming and glooming. We need a far more determined, positive framing, celebrating the transition to a new ecological civilization in which we finally learn how to live in harmony with Nature, and with each other.