Fifty years dedicated to studying, writing, creating, promoting and serving as an international networker have made Coyote Alberto Ruz a first-line pioneer, a veteran and an historian of the intentional communities, ecovillage and bioregionalist movements. In the last seven years he has dedicated most of his time to organizing global, local and national campaigns for an Earth Jurisprudence, recognizing Mother Earth as a living being with rights of her own.

For the last four years, Coyote, as part of a strategy to which he has committed the rest of his life, has been taking these activities to Europe, as well, especially to Italy, Spain and Switzerland, delivering the Universal Declaration of the Rights of Mother Earth to the mayors of more than 25 cities in Italy, including to Pope Francisco at the Vatican.

Chiara Lionello contacted Coyote Alberto in this last tour and arranged for this interview, which was published in the Italian magazine “Vicini” from Turin. We share the English translation by Antonio Giachetti.

When and how was the idea of having a Universal Declaration of Mother Earth Rights born?

Since those first countries adopted the Universal Declaration of Mother Earth Rights, we have the impression that the South American nations are more sensitive to the issue of Rights of Mother Earth. Would you agree with that point of view?

I believe that the reasons why this movement is stronger here in South America is due to the fact that the indigenous people of these countries already have a different relationship with Nature, compared to that of the European or North American nations. They have always had a relationship with Mother Earth based on respect, harmony and interdependence. Right now this movement is stronger in Colombia, Mexico, Chile, Brazil, Ecuador and Bolivia – countries which have a close relationship with the cosmogony of the Andean people.

As of today, how many nations have adopted the Universal Declaration of Rights of Mother Earth?

Right now we are instead focusing on the recognition of the rights of Nature’s specific components, such as rivers, glaciers, forests.  We succeeded with two rivers in India, one in New Zealand, a lake in the USA and dozens of cities whose mayors have signed the Declaration of the Rights of Mother Earth in Italy; the metropolitan authority of Mexico City and the State of Colima in Mexico have also done the same. The legal rights of four or five rivers in Colombia have also been recognized, where one state has also adopted the Declaration. In Brazil, three or four cities have recognized the legal rights of Mother Earth.

It is not only important, but fundamental to have a higher legislation, recognized by the United Nations, protecting not only Mother Earth but also all of those fighting to protect the territories where they live, such as the natives and indigenous populations in South America. Without legislation protecting the rights of Mother Earth, we will carry on with the destruction of Nature and the human race – beginning with the populations that are defending their territories. 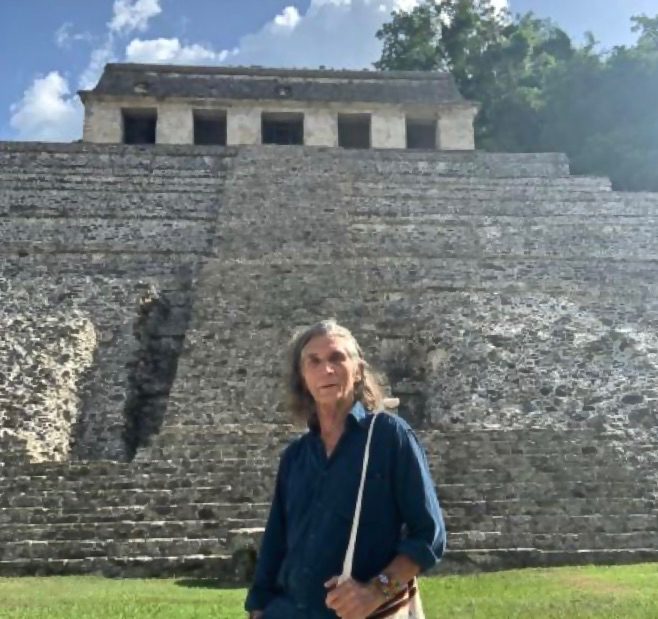 Alberto Ruz Buenfil in front of the tomb of Mayan ruler K’inich Janaab Pakal discovered at Palenque by his father, Alberto Ruz Lhuillier, in 1952.

We believe that right now it’s more important for people to know that this is already a global movement. A special International Rights of Nature Tribunal is held concurrently with the United Nations Framework Convention on Climate Change and will next meet in November/December in Chile for COP 25 to pass judgement on those that are violating Mother Earth’s rights.

For a nation to recognize the Universal Declaration of Rights of Mother Earth, there is a legislative procedure that involves the two branches of Parliament. That is why we are actually focusing on specific cases, and per example, have managed to bring this matter to the attention of the Chilean Parliament.

What do you think is the first step each one of us must take to change the future of the planet? The first point of the Declaration says that “Mother Earth is a living being”: what is the relevance of such a statement?

Until today all laws have been anthropocentric: We have a legislation conceived by men for men, in which Earth, by not being recognized as a living being, does not have any rights. The first thing to do is a qualitative leap in human awareness and realize that we have no chance of surviving without Mother Earth, therefore we must stop considering the elements of Nature as commodities that are a subject of ownership, either by states or privately. The alternative is facing mass extinction – only this time it won’t be the dinosaurs.

Once we understand that, one realizes that we need to find a way to increase the number of people who are aware of the fact that the future of humanity is at stake. All the events of the past, such as wars, were local events, limited to certain territories; even the two ‘world’ wars should not really be deemed to be such, if we compare them to the problems we are facing today. We should get inside the mindset and see this as a global issue, where everybody is involved. We are already beginning to realize that: for the first time in history, we have a world strike such as the one proposed by the Swedish teenager Greta Thunberg, and it is also the first time I am seeing such a deep and global resonance for the environmental disaster happening in the Amazon – because it is not a problem of Brazil and the Amazon, it affects all of us, as it is about being able to continue to breathe.

Every time a group of people starts to make others understand that there’s a need to take action for a given problem, they can start to undertake initiatives to adopt this law, as we are doing. The abolition of slavery in America and of apartheid in Africa started with small groups which engaged themselves in the recognition of specific rights.

Do you believe there is a positive response not only to the Declaration of Rights of Mother Earth but also to the numerous calls we are receiving to improve the situation of the planet? Are you optimistic about that?

For example, if we look at the level of the highest spheres of power such as the G7, which meets to decide the fate of the entire planet, then there is no hope: It is impossible to believe that a change of direction like this could be implemented by the governments of the great nations – though we should stop talking about national States, because the great majority of them respond to the market governed by large banks and transnational corporations which serve their own interests and are definitely not interested in environmental issues. On the other end, as I travel a lot, I come in contact with different groups of people who are working to reverse this process of destruction: at this level, yes, there is hope.

Right now a battle is going on between optimism and pessimism: Social media keep bombing us with catastrophic news which have the effect of discouraging us from taking actions which could change something; they have an interest in feeding pessimism, as they respond to governments which depend on corporations, beneficiaries of undisturbed exploitation of Mother Earth. We must continue to create alternative means of communication, social networks which spread the truth and desire for change. I am confident that the new generation born in this millennium will have a new solution for all of this, one in which we don’t need to decide between capitalism and communism, considering that all systems are actually focused on the exploitation of the Earth and the people.

The response is starting to become global, it is true, but globalization has two sides: one is uniformity of thoughts, desires and fears, and another is the possibility of change and an increase in humanity’s awareness. That is why we must continue to support hope, even though the vast majority of humans keep walking like zombies who do not think and do not criticize, do not even see – because the options are made invisible, and if they aren’t seen, one thinks that there is no other alternative but to integrate to the masses that exist only to consume and destroy.

In your opinion, is there a way for the Rights of Mother Earth and the very idea of the progress of industrialized countries to live together?

There are people who have no options, born in a certain social, environmental, economic, racial situation, which defines their choice; but those of us that have that choice, we can try to find a lifestyle as consistent as possible with our thoughts and feelings, and have a less destructive relationship with Nature. Mine is a special case: more than 30 years ago I chose to live in a community which in the beginning was nomadic and theatrical. Today, it is an ecovillage. This is the way we try to live with a less severe impact on Nature. 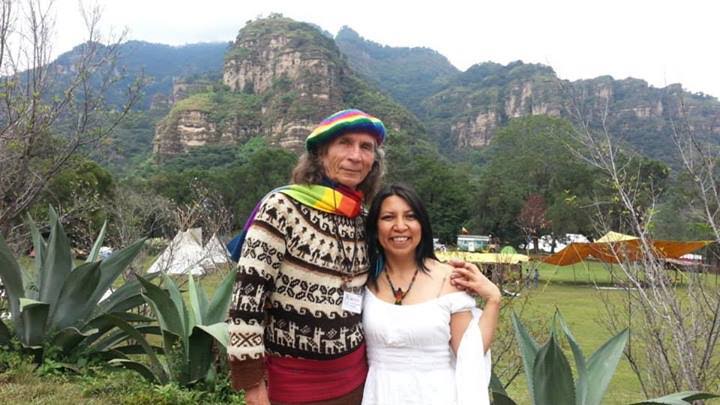 Alberto Ruz and wife Veronica Sacta at theVision Council – Guardians of the Earth gathering, a group he helped to found in the 1990s. The itinerant ecovillage project has celebrated 25 gatherings in different parts of Mexico, all designed to raise awareness about sustainable lifestyles, indigenous traditions and Earth-based spirituality.

What kind of space can ecovillages occupy in present-day society?

There is not a great deal of social interest in the projects we are implementing, which offer an alternative compared to modern lifestyles. But we are realizing that it is always the same groups and the same people who are active. That worries us because, although we are doing everything possible to make our battle known to the public, we find it difficult to draw people’s attention on our projects – as these are positive news that do not spark the same interest as violence, sex and all the tragedies which are happening worldwide.

Like our ecovillage project in Mexico, there are many more projects which were born out of the same ideas and practices, even in cities. The Transition Towns Movement is spreading to urban districts with different proposals for a more sustainable lifestyle that is more responsible towards the natural world – which includes changing the way we eat, produce, consume and educate. We are a generation that comes from the sixties, seeking to break free from conditioning. We haven’t always had the desired effects, but we have made good progress and can pass these proposals on to the new generations, especially the message that there are many alternatives to becoming part of the zombie mass.

Teaser photo credit: Forum for the Rights of the Mother Earth in Mexico City, June 2016.