When the late Houston based investment banker Matt Simmons wrote his 2005 book “Twilight in the desert, the coming Saudi oil shock and the World economy” he could not have imagined that Saudi Arabia would be threatened by a pre-dawn drone & missile attack on a plant in Abqaiq, processing oil from Ghawar, the very oil field Matt had warned suffered from high water cut rates and could not maintain production rates of 5 mb/d (chapter 7).

One of Matt’s slide shows is here: 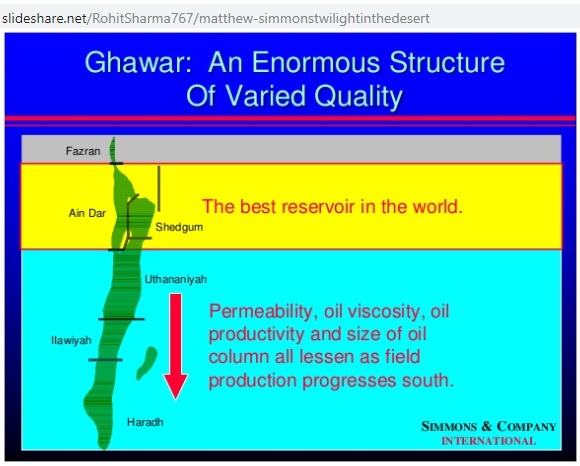 According to the prospectus, the maximum sustainable oil production capacity (MSC) from the first 3 fields (affected by the attacks)  in the above table should be 3.8 + 1 + 1.45 = 6.25 mb/d.

Fig 5: Graph from the same prospectus showing how Abqaiq is connected to Ghawar, Khurais and Shaybah oil fields

In one of the pre-cursors to the Abqaiq attack, Shaybah’s gas plant was hit by Houthi Qasef K2 drones  on 18 Aug 2019, causing a ‘limited fire’.

The function of Abqaiq

Abqaiq processes crude oil from the Ghawar and Abqaiq oil fields. Oil from Shaybah (stabilized at the field) is pumped via a 630 km long pipeline to Abqaiq for blending.

This quote from Hydrocarbons Technology describes the process:

Crude oil extracted from oil wells is under pressure and contains oil, dissolved gas, salty water and small quantities of hydrogen sulphide. The oil is depressurised and separated from dissolved gases in the Gas Oil Separation Plant (GOSP).

In the GOSP, the oil is depressurised in multiple spheroids to free the dissolved gases.

The resultant dry, hydrogen sulphide-free, stabilised oil is sent to the refining plants in Ras Tanura and Jubail on the east coast, Yanbu on the west coast and Bapco in Bahrain.

The off gases from the oil processing unit are sent to the NGL facility for processing.

Feed gas received from the oil processing unit is compressed in NGL’s compression trains and passed through the stripper columns and de-ethaniser column. The resultant effluent from the columns consists of overhead light gases and NGL product (oil).

The light gases are transported to other gas plants for processing and the NGL product is sent to the Ras Tanura refinery for fractionation (a separation process).

Fig 6: Abqaiq was built in the 1970s oil boom years. The columns in this picture were not hit

On 5 Aug 2019, the Centre for Strategic and International Studies published a paper entitled: “Iran’s Threat to Saudi Critical Infrastructure: The Implications of U.S.-Iranian Escalation” with following map:

The row of processing columns to the left are shown in Fig 9 a,b

Fig 9a: 5 Processing towers hit with high precision and destroyed

Fig 9b: Zoom into the 2nd group of processing towers

There are burn marks but the tanks did not explode.

” …and for all of the production or the production capacity, at Abqaiq, many months. And that’s unfortunate. The thing about Abqaiq is it has specialized, tailor-made, very difficult-to-fabricate equipment. Spheroids and stabilization columns. They come as big bowls and tubes. The lead time for these things is about 6 months if you are trying to rush it. This is not an Amazon Prime type of proposition. Those were destroyed. At least 5-7 of the spheroids were destroyed and about 5 of the 18 stabilization columns. These will take many, many months to replace And that will limit the Kingdom’s ability to bring back the capacity at least if not production to the full amount”

The attack has come as Ghawar is in peak oil mode. Way back in 2004 Ghawar had produced 48% of its reserves, according to a Saudi Aramco slide show by Baqi and Saleri presented at the Centre for Strategic and International Studies in Washington.

Slide 20 in the above presentation contains a graph with Ghawar’s production levels of  5 mb/d between 1993 and 2003. And slide 18 has ‘Ain Dar/Shedgum producing at 2 mb/d or 40% of Ghawar. The Energy Consulting Group has put production data from various sources including the drop in production to 3.8 mb/d mentioned above into following graph:

Cumulative production according to the above graph was:

In May 2018 – before Saudi Aramco’s IPO – French oil geologist Jean Laherrere did a projection for an ultimate of 123 Gb, not much different from the figure above. However, his cumulative production up to end 2018 was higher, 88 Gb, giving a depletion level of 72%.

In May 2019, after the publication of the IPO data, Jean Laherrere revised his graph with an ultimate of 120 GB but a slightly lower cumulative production of 86 GB at end 2018, also giving a depletion rate of 73%.

Fig 16: Jean Laherrere’s production forecast for Ghawar and Saudi Arabia as a whole done in May 2019

More than 150 Gb have been produced in Saudi Arabia compared to the ultimate recoverable between 250 Gb and 350 Gb, a huge range.

All this means that Ghawar has peaked and future production is set to decline. The money now spent (hundreds of millions of dollars) on Abqaiq’s repairs will not be available to control decline rates in the field.

The Abqaiq oil field extends north from the city of Buqayq. It has its own GOSPs but oil goes to the processing plant in Abqaiq. This graph by Dr. Nansen Saleri  was shown at CERA week in Feb.  2007.

Saudi Aramco is now buying crude from UAE and Kuwait to meet commitments with Saudi Malaysia and S-Oil in South Korea.

The Saudis have around 180 m barrels in stock which they now use to meet supply contracts. A certain percentage is needed for operational purposes. Depending on how fast how much production is back, a shortage problem will pop up in 1-3 months.

Oil from the NZ would require that Kuwait and Saudi Arabia settle their dispute. Of course, except for Russia, these countries would all depend on Hormuz.

Would US shale oil provide?

The US is NOT a swing producer which can quickly, i.e. within 30 days, ramp up production. This is because legacy decline rates limit any production growth.

Fig 19: Drilling report on the Permian

The Permian, which now produces more than Ghawar, declined at 267 kb/d per month. In the last 12 months the cumulative annual decline rate was 70%! And it will get worse as the production change tab in the above graph shows.

Bob McNally from Rapidan Energy Group (Fig 12) advised the Committee on Energy and Natural Resources of the United States Senate on July 24, 2018:

Another aspect of the problem’s magnitude:  US crude exports were around 3 mb/d in June 2019. They would have to be more than doubled to replace production from Ghawar. Fig 22: Gravity and sulfur content in different grades of oil

Ghawar’s Light Arab has an API of 34 with a sulphur content of 1.9- 2.2 % by weight (which the Abqaiq plant must remove). Therefore, much of the very light and extra light shale oil cannot really replace Ghawar oil directly.

Most importantly, if the US continues with its Iran sanctions and the war in Yemen goes on, the next attack is almost certain. The Houthis have already threatened to attack the UAE

Interview with Former Iranian Presidential Candidate Hooshang Amirahmadi. He is director of the Center for Middle Eastern Studies.

On 19 Sep 2019 the Australian public broadcaster ABC TV had an interview with him. Here are some extracts:

AMIRAHMADI:  Iran is trying to prevent a full scale war by involving in these acts of limited – in their view – violence in the region. In fact they are telling the Americans and the Saudis that if you were to wage a fully-fledged war against us you will see much more than what you see now. These are examples of what you could expect if you start a war or attack us. And I believe there are 2 groups: religious leaders, fanatics, who really actually do not mind to have a war with the US.

After all they are the government of God, and the US is the government of Satan. So that’s a holy war in a way. But I believe the Revolutionary Guard and militaries in the country do not really want a war with the US. And I believe these military units have launched these acts of violence in the region, in the sea and against the Saudis to indeed prevent the war that the Mullahs want.

AMIRAHMADI:  I believe Iran, the people who did this, may have over played it. I don’t believe  they really knew what they are doing.  I believe they thought that this would be much limited than they really got to see. That is to say they were not really thinking that they will be destroying 5% of the world crude oil supply. And that will be a huge impact on the global economy and so on. They were not really honestly thinking in this direction. They thought that few missiles would hit certain areas and that would be sort of punishment for Saudis and others, you know, to take and that they could wrap it up. But then again, to their surprise, I believe, this military action that became much, much bigger than they had expected. Now they have to live with the consequence of what they have done.

This transcript is unofficial, taken before the iview video expired 3 days later.

The world cannot live without Saudi oil. While media focus is on oil prices and how quickly full production can be brought back Saudi Arabia’s underlying peak oil problem has not been discovered yet. Together with the permanent threat of further attacks there is a double vulnerability now. The fact that oil prices have come back to levels before the attack (similar to the Aug 2008 BTC pipeline attack in Turkey) shows the global economy is weak. It is weak because the money printing in response to high oil prices in mid 2008 and 2011-2014 (shale oil boom!) has created a debt problem weighing down on the financial system and the balance sheets of many companies. The collapse of Thomas Cook is the latest example. And we should not forget that the US shale oil with high decline rates is built on debt, too.

Almost Half of Australia’s Petrol, Diesel and Jet Fuel Imports come from South Korea and Japan