A talk given as part of the panel session on The Economics of Climate Emergency, at Manchester Metropolitan University’s launch event for the Future Economies Research Centre.

If nothing else, the last few months have heightened awareness of the desperately parlous predicament that now faces humanity, with an accelerating climate and ecological crisis. So attempts to design assertive policy proposals are very welcome. The Green New Deal is the one that currently is getting the most attention and perhaps traction. So I want to ask some critical questions that generally seem to be ignored in the infectious enthusiasm for the idea. In doing that I’ll also be rehearsing some insights from the degrowth perspective.

All this is about the relationships among three spheres, exchange value, use value and (physical) materiality. 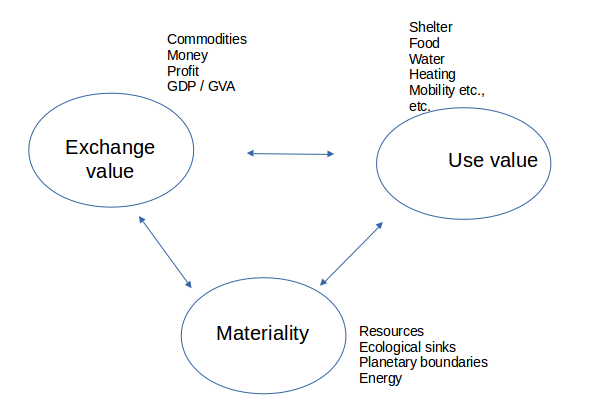 With this terrain in mind, let’s look at the 6 problems for Green Deals.

In one of the clearest statements on the theory that underpins the GND idea, the original UK GND team explained that:

“… government intervention generates employment, income and saving, and associated tax revenues repay the exchequer. This is the multiplier process, attributed to Richard Kahn, Keynes’s closest follower. Any public spending should be targeted so that domestic companies benefit, and then the wages generated create further spending on consumer goods and services. So combined heat-and-power initiatives generate income for construction and technological companies, and then workers’ salaries are spent on food, clothes, home entertainment, the theatre and so on, creating demand for those industries.” (New Economics Foundation 2008, p. 27)

For more on the Keynesian thinking that underpins Green New Deals see this article.

But here is the problem. Increases in the scale of economic activity (as conventionally measured in terms of GDP) are associated with increases in the throughput of energy and materials, and these increases have involved increased emissions of greenhouse gases, resulting primarily from the extraction and combustion of fossil fuels. Green growth, requires that this association between GDP and GHG emissions must cease to exist: this is known as ‘decoupling’. It is doubtful whether any developed country has achieved this at the scale and permanence required (Burton and Somerville 2019, pp. 99–101), especially when international shipping and aviation plus embodied carbon in imports are taken into account (Anderson 2019).

Irrespective of the levels of GHG emissions, the material flows that underpin the current scale of the economy already involve problems with extractive industries (located largely in the global South) and land use change more generally. For these material flows, the overall evidence is that there is no decoupling from GDP growth, with the (international) material footprint increasing by some 6% for each 10% in GDP (Wiedmann et al. 2015).

For each increment in the scale of the economy, there is an increment in the extraction of minerals, the number of mines, the extent of cultivated land, the extraction of water, the number of ships, lorries and planes carrying goods and people, and in the amount of waste that has to be disposed of, whether by recycling or by dumping it in the earth’s land, sea and air, its ecological sinks.

2) The multiplier doesn’t care about the climate.

The multiplier effect, referred to above, creates a problem because it is non specific: other things being equal, there is no control over where the multiplier effects have impact. So the desired, clean, growth of the economy has undesirable implications in terms of additional resource and energy use. Clean begets dirty.

Read more about this problem.

3) The inherent constraints of renewable energy. 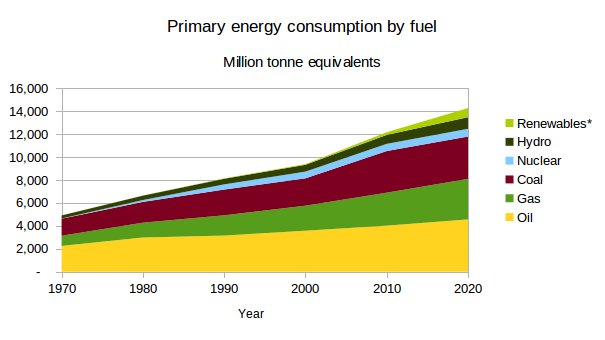 GNDs emphasise switching to renewable energy. So far, increases in renewable energy deployment have not led to a reduction in fossil fuel usage globally. Overall their deployment has been to add to the global energy mix rather than replacing fossil fuels. Moreover, it is doubtful whether renewables can provide the scale of concentrated energy used by the current global economy: the constraints are less in the power that could theoretically be generated from natural flows than in the minerals needed to deploy them: minerals used in generators and motors, in batteries and in electronics, as well as copper for transmission of power (García-Olivares 2015). These are finite and with limited substitutability. The revolution will be low powered, so the Green Deal has to factor in a plan for energy descent.

4) Diminishing return on investment due to resource scarcity

The well validated, and landmark, Limits to Growth study modelled the impacts of resources becoming scarcer and their cost increasing. This undermines the stability of the production system well before the resources are near exhaustion: inexorably reducing returns on investment lead to an economic collapse (Meadows et al. 1974, 2005, Turner 2008, 2014, Homer-Dixon et al. 2015). Any expanding economic system has to grapple with this, even if it successfully exploits essentially free natural energy flows: you can’t create minerals from sunlight. These economic consequences of the increasing scarcity and inaccessibility of most minerals and metals need to be addressed in any credible Green Deal, yet there is almost no discussion of this crucial reality in any of the proposals, nor of the ‘hidden’ resource intensive demands of new technology.

Read more about the Limits to Growth and the EROI problem.

5) The other planetary boundaries.

Even if it were possible to mitigate the climate crisis through the kind of transformation proposed in the various Green Deals, there are other ecological crises to contend with. These can be understood in terms of the Planetary Boundaries framework proposed by Johan Rockström and colleagues (Rockström et al. 2009a, 2009b, Steffen et al. 2015). Climate change is just one of these boundaries. As of 2015, the evidence available to the Planetary Boundaries investigators indicated that

“Four of nine planetary boundaries have now been crossed as a result of human activity:… …
Two of these, climate change and biosphere integrity, are what the scientists call ‘core boundaries’. Significantly altering either of these “core boundaries” would “drive the Earth System into a new state”.

Transgressing a boundary increases the risk that human activities could inadvertently drive the Earth System into a much less hospitable state, damaging efforts to reduce poverty and leading to a deterioration of human wellbeing in many parts of the world, including wealthy countries…”

Read more about this.

It is unclear whether and how the various Green Deals propose to address these additional threats, whether or not they rely explicitly on green growth.

I should note that the newest, and very comprehensive set of proposals, from the Green New Deal for Europe grouping, does acknowledge and attempt to address all these questions, although not necessarily altogether convincingly (Adler, Wargan, & Prakash, 2019).

But it is in the political economy of the GND where we have a fundamental contradiction that will not be easily resolved.

6) The GND and the capitalist growth imperative.

Paying for the GND has attracted a lot of debate and I don’t propose to go into the intricacies. Broadly, it is suggested that this be done by Government and private sector, raising credit from other sectors of the economy, i.e. individual and corporate investors, including public and private sector pension funds.

The problem is that this all assumes a return on the investment.

For the private sector, this is via interest or dividends, based on the profits from the new activity.

Some advocates suggest that the GND be funded through money created by government especially for this purpose – by electronically printing money.

In all these cases, the advance of money for investment ultimately requires ongoing expansion of capital, the modus operandi of the capitalist system, founded on the expropriation of surplus value in the labour process, which we know as economic growth. Without expansion, there is no, or insufficient, return on the outlay.

Despite the claims of some GND advocates, Green Deals are predicated on the expansion of GDP and as we saw, we can’t rely on that to decouple from material impacts.

read more about this

That is, unless another way can be found. There are some indications that this might be possible.

Firstly, an ecologically feasible Green Deal would entail some way of capping resource and energy use at source, effectively the equitable rationing of commodities (goods and services). Doing this would also incentivise the transition to less ecologically and resource intensive offerings across the market, so long as emitting activities weren’t driven underground.

Secondly, a number of studies show that the creation of credit could, under certain conditions, fund necessary investments without creating an imperative for economic growth (Berg et al. 2015, Jackson and Victor 2015, Lee and Werner 2018).

Thirdly, if the industrial sectors of the new economy were taken out of private capitalist ownership, then the motor of capital self-expansion need not necessarily be required, though this would, I think imply a trajectory towards a steady state, at least for that part of the economy.

Fourthly, some of the expansion could conceivably be funded by the redirection and re-prioritisation of undesirable economic activity – though much of that still requires profitability.

Fifthly, as the latest of the GND papers suggests, aggregate energy demand must be reduced by scaling down material production and throughput. That would entail shifting income and welfare creation from industrial production to social and environmental reproduction: maintenance, recycling, repair, and restoration of environmental and infrastructural resources, as well as education, culture and care for people and environment. But that, idea, close to the dépense favoured by some degrowth theorists (e.g. Kallis, 2015), besides sounding like pie in the sky under capitalism, ignores the massive, neocolonial, outsourcing of industrial production to other economies.

Done in a managed way, that would be a lot better than the unmanaged periodic destruction of value that is a feature of capitalist cycles, but how do we get it to happen? What Kind of a Green Deal? The Implications of Material and Monetary Flows