The climate crisis demands an urgent, realistic and sustained response from governments around the world: such a response will inevitably require sacrifices from all of us. And there lies the rub for our systems of representative democracy.

How can politicians facing short-term constraints (particularly the need to be re-elected every few years) be expected to take the necessary decisions that require long-term and, probably, quite painful change on the part of the citizens who get to vote for them?

This is where a citizens’ assembly could help, as the experience in Ireland shows. The country’s ban on abortion was an intractable problem that generation after generation of political leaders had failed to resolve. In 2016, under intense domestic and international pressure, the Irish government established a citizens’ assembly and tasked it with coming up with recommendations. It met over the course of five long weekends spread across five months. The 99 citizen members heard from expert witnesses, advocates and women who had been affected by Ireland’s abortion ban. In carefully facilitated roundtable discussions the members deliberated on the subject, producing a series of recommendations that were then sent back to parliament. A special all-party committee of parliament spent a number of months debating the recommendations. The result of this was the decision to have a referendum, which passed by a two-thirds majority in the summer of 2018.

In Britain, the Extinction Rebellion group believes that a citizens’ assembly could play a similarly important role in addressing the climate emergency. At the heart of a citizens’ assembly is random selection: in much the same way as for jury duty, regular citizens are selected at random. They have not run for office; they are not there to represent special interests. The citizen members are there to represent themselves, and thereby the greater population, of which they are a representative sample.

This is bringing “disorganised society” into the room – giving regular citizens a voice in helping to drive debates on important public policy. These citizens, in turn, are put in the special position of informing and educating the political classes – helping our political leaders to work through the complexities of a difficult issue; informing them of aspects they might not have considered before; giving them a sense of where citizens might be prepared to go; even providing some degree of political cover.

What is laudable about the Extinction Rebellion agenda is that the activists are not pushing for particular policy decisions on the climate emergency: they are merely asking that their government agrees to establish a citizens’ assembly and give it the task of bringing forward proposals.

There are certain things that need to happen for this to work properly. The citizens’ assembly should be established by government, not parliament (because it is the government that ultimately calls the shots), but it should report back to parliament so that all political parties are given the opportunity to debate its recommendations.

The agenda should be defined carefully. An ideal way to ensure this would be to allow the assembly itself to clarify it owns terms, guided by the experts advising it.

It is critically important that the assembly’s recommendations are dealt with respectfully: this does not mean that they are necessarily all accepted, but they should not be ignored. The Irish model of having an all-party committee debate the report would be worth emulating.

Although government sponsors it, the assembly should be run independently of government (with methods such as tendering out the task to an agency with appropriate expertise). And the process should be run openly and transparently with all documents going online, live streaming of expert presentations, and full details of the key names involved in running and advising the process. Everything possible should be done to ensure that the process is seen as objective and above board. 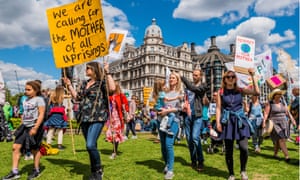 ‘The climate change emergency cannot be dealt with adequately in a few weekends.’ People on the The Mothers Rise Up march in London in May. Photograph: Guy Bell/REX/Shutterstock

And the process needs time. The climate emergency cannot be dealt with adequately in a few weekends. The citizens’ assembly needs time and space to allow the members to develop sufficient expertise on the topic to be able to deliberate in a suitably informed way.

One might be forgiven for thinking that the recent announcement by the select committees of the House of Commons that they will establish a citizens’ assembly on climate change this autumn is a sign that the political establishment has listened. But actually this is not the case: that is parliament acting – not government. The agenda has been tightly defined (focused on existing 2050 targets, which many now feel are not enough). The scope is also unrealistic (only two weekends of meetings, expertise provided solely by civil servants). There is a danger that this process will be tokenistic, inadequate, and provide parliament with the cover that the “climate crisis” box has been ticked.

This climate emergency requires a courageous response from our political leaders. This is a real test for our system of representative democracy, built on the notion that our parliamentarian ne’er-do-wells are available for a good kicking every few years. Climate breakdown presents a real conundrum because it requires a long-term solution, one that goes beyond an election cycle. A citizens’ assembly – given sufficient time, resources and expert assistance – offers one means to solve the problem of taking difficult, long-term decisions in a political system governed by short-term rules.