In a plush suburban Berkeley home, newly appointed Malaysian Senator Banie Lasimbang hands around a pelton wheel bucket made from old aluminum beer cans, which are in no short supply in Banie’s home state of Sabah. These are used to turn micro-hydro turbines, transforming water and gravity into electricity in Malaysian Borneo’s remote villages. 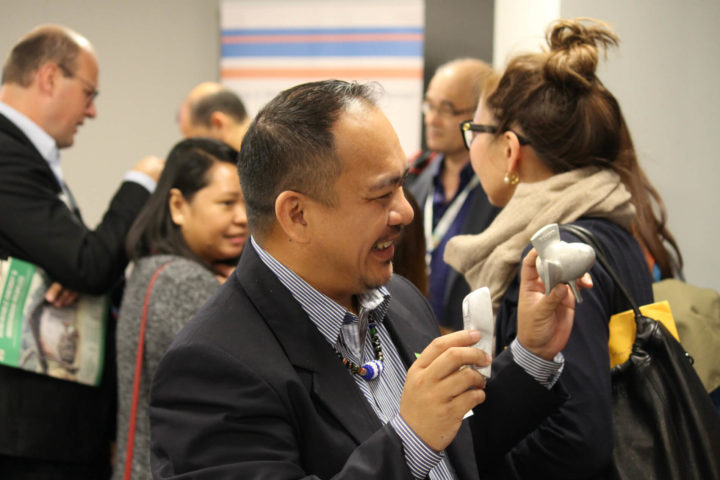 A few months later, I’m heading to Sarawak to chat with some of the villages that have not only adopted micro-hydro systems, but have actively resisted the mega-hydro dam projects that threaten their land. They are part of the Ockham’s Razor moment that is taking place in the climate debate; as many indigenous communities are showing that the simplest pathway is often the best. Whether it be implementing basic technology at the grassroots level, using forest resources in a way that is mutually beneficial for plants and people, or knowing when to simply leave forests alone in order for them to recover, we have much to learn from indigenous solutions to the climate crisis.

Gara Jalong is the Headman of Long Lawen, and he has been jailed 5 times for trying to protect his land. As our Hilux rolls in to the village, we are greeted by Gara, along with the sounds of birds, frogs and insects — all indicators of healthy rainforest. The air is cool and clean, and the dogs emerge from under the house to find out if we have any snacks or pats to donate to their cause. We have both. 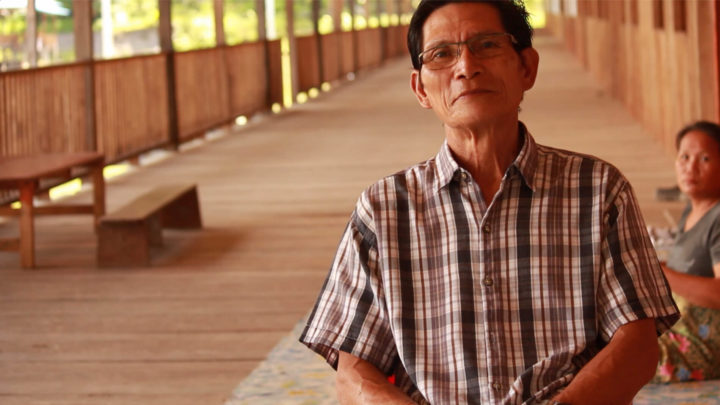 The people of Long Lawen refused to move to a resettlement camp when the Bakun mega-hydropower dam was built in the late 90s. Instead, led by Gara, the community moved to higher ground and resettled independently above the dam site.

In 2000, Banie helped them build the first micro-hydro project in Malaysian Borneo in Long Lawen. This model has since been replicated dozens of times, to varying levels of success. 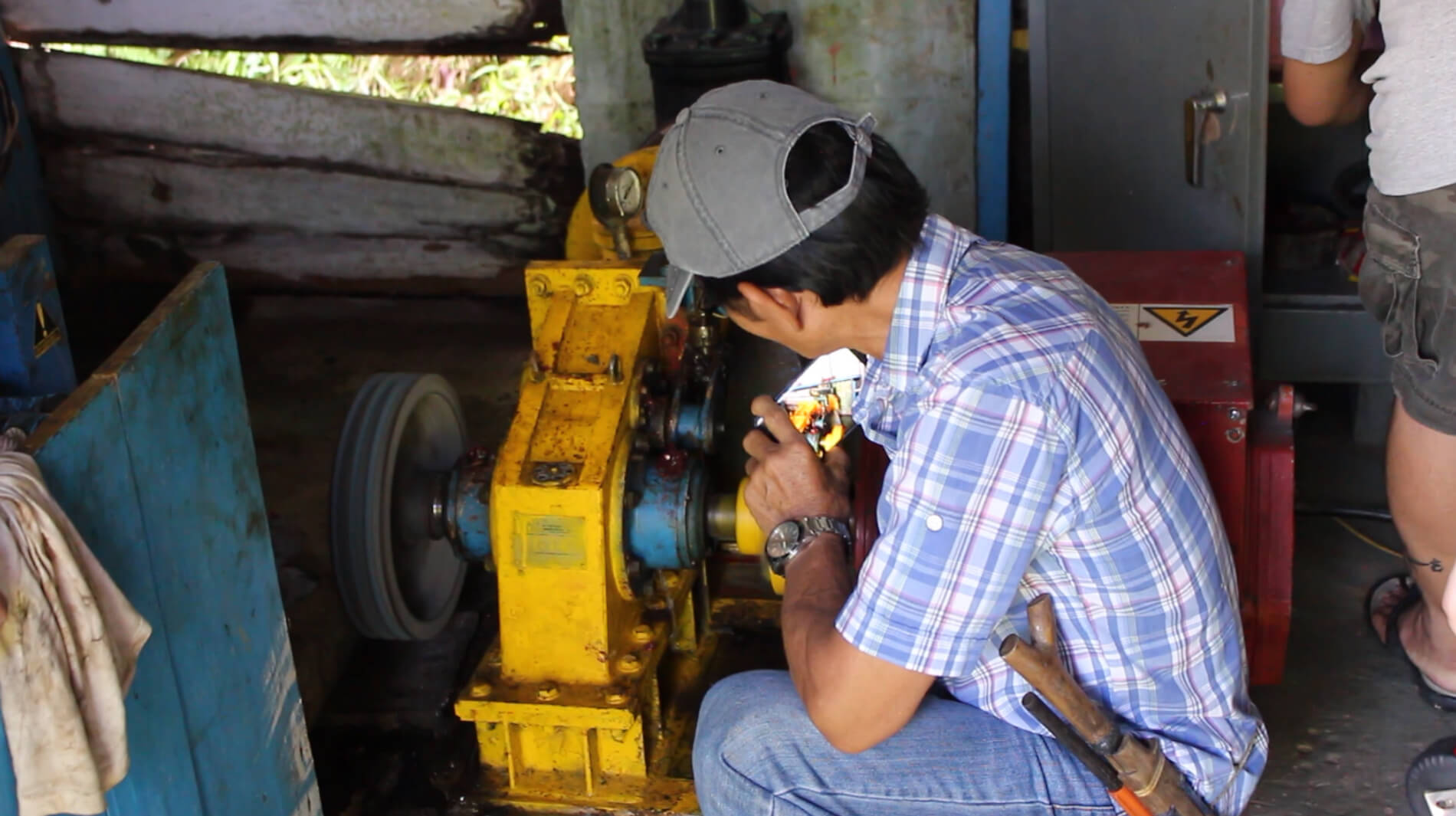 Long Lawen now has 66 ‘doors’ (essentially 66 separate apartments connected in about a dozen Escher-like longhouses), 88 families and 369 residents. Like most longhouses in Sarawak, the permanent residents tend to be the older generation who prefer the rainforest lifestyle. This is not just an idyllic retirement plan, but a way to keep tradition alive — through hunting, fishing and crafting non-timber forest products. Women sit out on the verandah weaving fishing traps with their fingers and toes, their ears stretched long in the proud indigenous style that has gone out of fashion with the younger generation.

At Christmas time, the full 88 families will return back to what they refer to as their real home, their kampong. This is when the electricity demand is at fever pitch. Before we arrived we were told that the micro-hydro project at Long Lawen provides 12 kilowatts of electricity 24 hours a day, lighting a school and a local clinic. When we arrive, we learn that the micro-hydro is producing between 4 and 6 kilowatts on a good day, and is not nearly enough when hundreds of relatives arrive at once.

Gara has been campaigning for his historic adversaries Sarawak Energy Berhad, the megadam builders, to send some electricity from the Bakun Dam his way to fill this gap. The great irony of these major industrial energy projects that displace tens of thousands of Indigenous people is that those people are rarely the recipients of that energy. Megadams and rural electrification are viewed as discrete objectives.

In Sarawak, megadams have drowned hundreds of kilometres of rainforest in one of the world’s most vital carbon sinks. Worldwide, decomposing organic material at the bottom of reservoirs releases about a billion tons of methane a year. Claiming that mega-hydro systems are clean energy is greenwashing of the highest degree. And the human rights implications should be discouragement enough. As Baru Bian, Malaysia’s Minister for Works and indigenous land rights activist put it, “Any so-called clean energy policy that destroys primary forests is not clean. Neither are energy policies that displace indigenous communities. This is the simple truth”.

The following morning, it’s time to check out the micro-hydro. My companion Uncle Boyce must have a good 40 years on me, but he expertly scampers up our perilous hike, the ground composed of massive tree roots and loose leaves. When we reach the top, the path opens up to the micro-hydro water source: a waterfall surrounded by cool stones and mossy trees. We sit and chat while watching the water gush over the ledge. 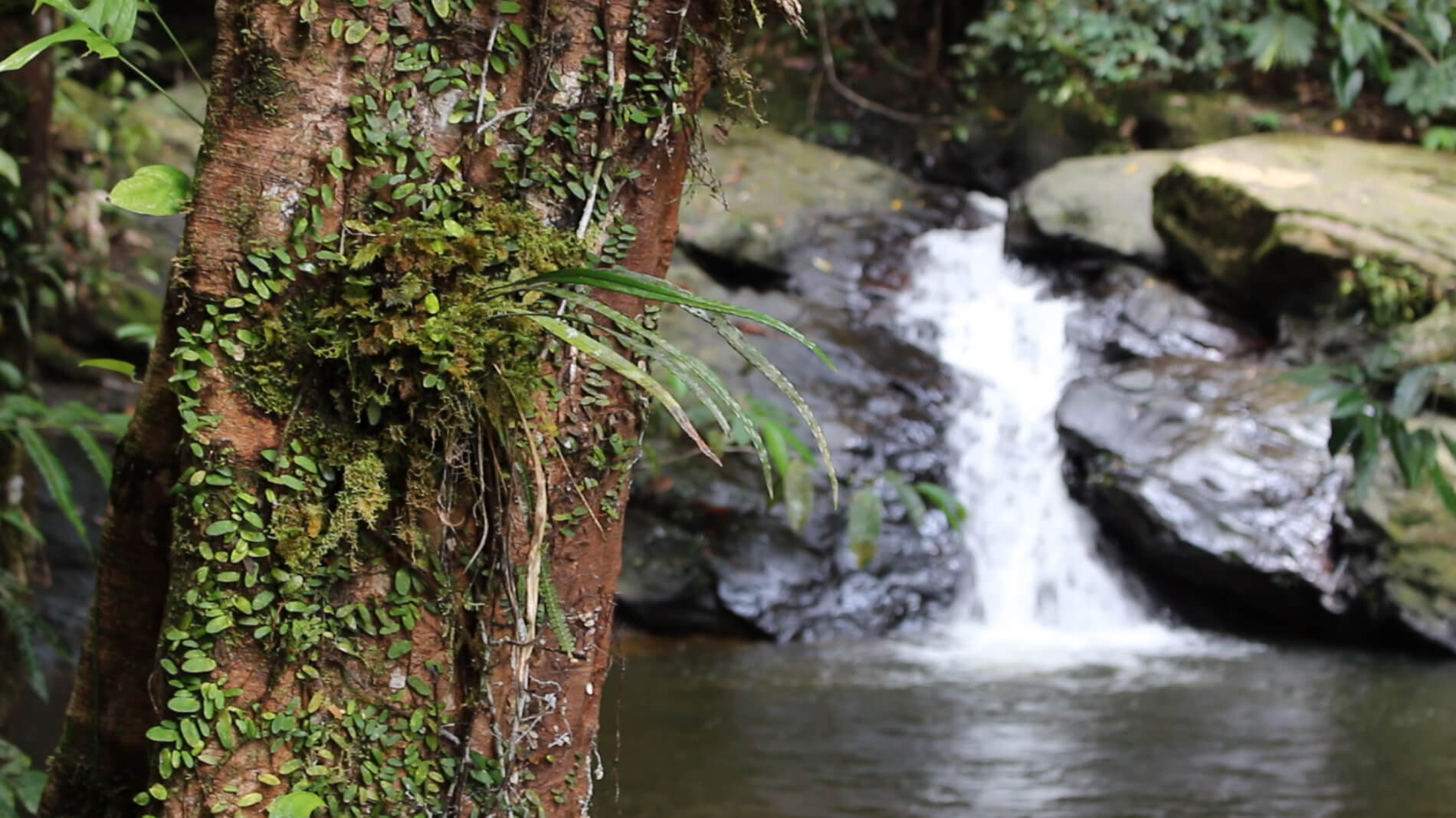 Uncle Boyce is from Long Liam, a village that recently built their own micro-hydro system, which at the time of writing has failed to light up the village. Despite strong community involvement in building and maintenance, the Long Liam micro-hydro has been riddled with technical problems, mainly because the pathway of the penstock from the water source to the power house is not a straight shot.

If the penstock needs to move, this means months of more muddy, sweaty work on difficult terrain. But Uncle Boyce says it is totally worth it. Now that he has seen Gara’s system that has operated for decades, a few more months of work is nothing compared with free, clean energy that will keep his village lit long after he is gone.

Uncle Boyce’s village is building this system after years of protest against the Baram dam. Had it been built, the Baram dam would have been the second largest megadam of its kind in Asia. It would have flooded an area of 400 square kilometres and displaced approximately 20,000 people. 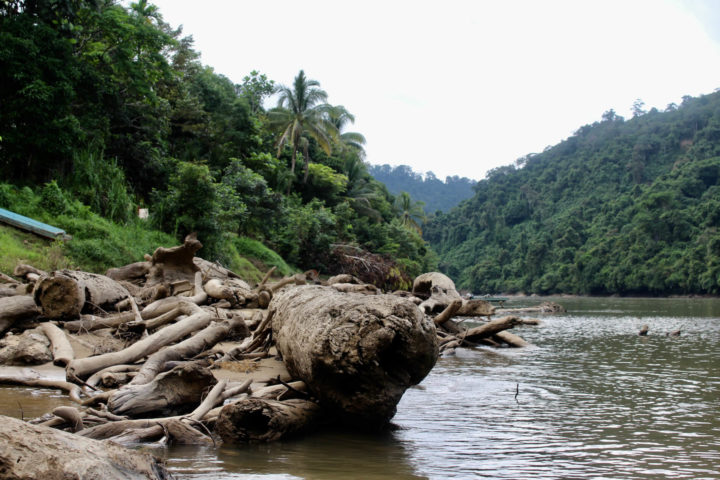 Long Liam would have been flooded by the Baram dam. Photo: Fiona McAlpine

After 7 years of blockades and campaigning along with dozens of other villages, the plans for the dam were shelved. This was an almost unheard of outcome in Malaysia; of grassroots community resistance winning out over the powers that be. The centre of the resistance was a roadblock called Kilo 15, where people came from all over the Baram area to receive updates and training about non-violent resistance and land rights. The roadblock was lit up by solar energy, again installed by our friend Banie.

These meetings sparked something in Uncle Boyce. This wasn’t just about the dam, it was about the rivers and the forest, the health of the whole ecosystem that is unrelentingly under threat — if not from megadams then from mines, from logging encroachment and palm oil infiltration, both legal and illegal. To Uncle Boyce, keeping the forest healthy is common sense because his culture and the forest are one in the same. Without healthy rivers and a healthy forest, economic development is pointless. Without healthy forests, there would be no longhouse communities left. 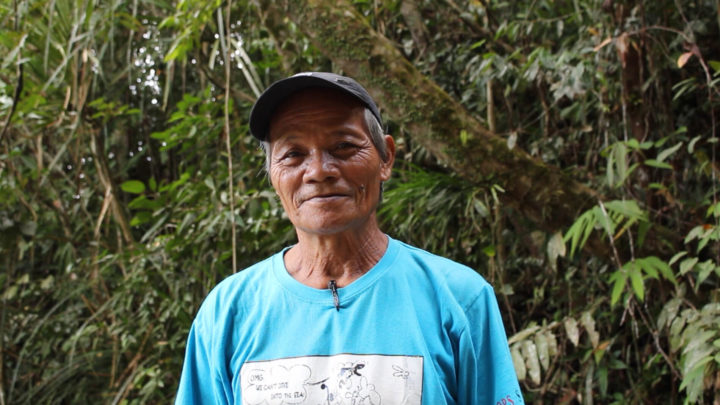 A lot of what seems like common sense to people like Uncle Boyce is backed up by the science. Granting Indigenous peoples native customary ownership over land has been proven in some cases to be the most effective method at stemming deforestation and illegal wildlife trade, regularly beating out ‘fences and guns’ methods or national park designations. This is because people like Gara and Boyce have a vested interest in keeping these ecosystems alive and healthy — it is their home, not a resource to be ravaged for short term gain. They’re also not creating policies from the outside looking in, but can lean on their inherited knowledge about how to hunt, fish and use the forest as part of the ecosystem, not its adversary.

Much of the climate debate centers on targets to cut fossil-fuel use, and this is where the majority of resources, campaigning and media focus their attention. But one of the most cost-effective carbon capture technologies is forests, both leaving existing forests alone and rewilding damaged ones. Forest protection could account for 37% of global climate mitigation targets but projects to protect forests receive only 2.5% of current climate financing. 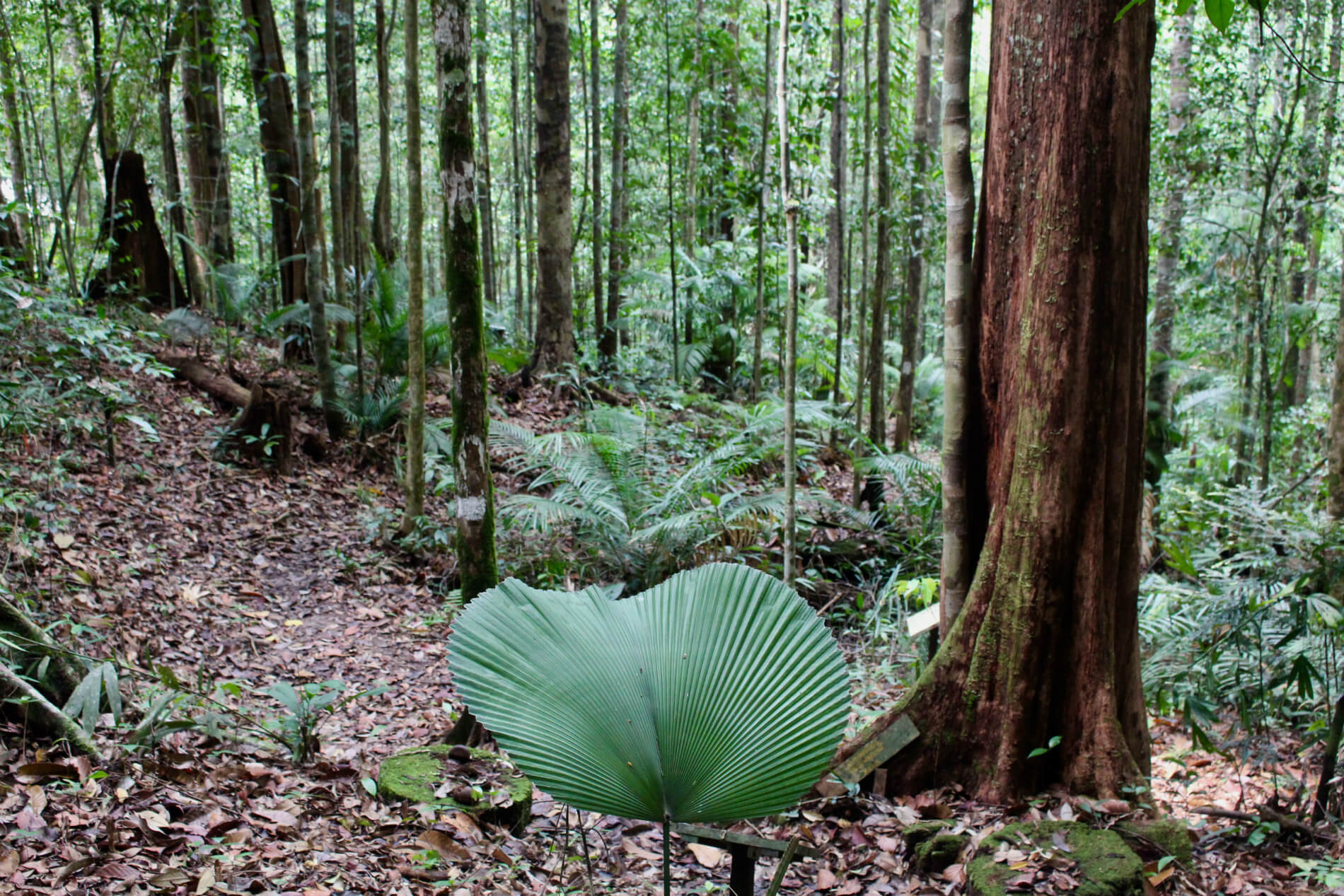 Intact forests could cancel out the emissions of whole countries. These are not the goals that communities like Long Liam and Long Lawen have in mind; they simply believe they have the right to protect their home and have autonomy over their land. But forest protection — and thus climate change mitigation — is an overlooked bonus of their struggles on the ground.

As we return from the micro-hydro a hornbill passes slowly above us. This is the first hornbill I have ever seen in the wild and it is larger than I expected, large enough that you can hear its wings whooshing overhead. As Malaysia’s national bird and the symbol of Sarawak, it is a fitting reminder of why we are here. The majestic birds are a totally protected species due to habitat loss and hunting, with Malaysia no stranger to the global trend of rapid species extinction.

More than 80% of Sarawak’s forests have been damaged in what was considered some of the Earth’s wildest lands only 35 years ago. The remaining primary forests contain precious biodiversity, revered and sacred species that never asked for any of this. If we can’t protect the tropics to dig ourselves out of a climate hole, we should consider doing it so that our grandchildren get to live in a world shared with leopards, gibbons and hornbills.

It is not an overstatement to say that our indigenous friends are at the forefront of some of the most important solutions to the environmental issues of our age. If we are to avoid catastrophic climate change, people like Uncle Boyce and Gara should have their voices heard. Perhaps the key to our planetary survival is to talk less and listen more, and to stop overlooking common sense solutions coming from the ground.