Often central within the capitalism versus the climate framing is the idea that the heart of capitalist ideology – free market fundamentalism – has fuelled the climate crisis. But this line of argument often glosses over the fact that energy markets are not free from government intervention. In fact, the fossil fuel industry is deeply and increasingly reliant on government support to survive.

In a forthcoming book chapter, I detail case studies from the world’s worst climate polluting countries. I show that the fossil fuel industry depends on an egregious amount of government support, which makes the public foot the bill for a harmful – and increasingly uncompetitive – industry.

In my chapter, I show that governments the world over favour fossil fuel interests through public financing, financial subsidies, and bailouts. In addition, the fossil fuel industry is helped by corrupt governance systems. Together this forms what I call a system of fossil fuel welfare and protectionism.

A recent study reported that South Africa subsidises coal by R56,6 billion per year – propping up a polluting industry with taxpayer money. South Africa continues to subsidise coal despite studies showing that renewable energy was helping to prevent energy blackouts, was saving South Africa billions on energy and that a renewable energy future is the country’s lowest cost energy pathway.

On the other side of the Atlantic, a recent International Monetary Fund (IMF) study showed that the US, the world’s largest historic greenhouse gas emitter, gives ten times more to fossil fuel subsidies than it does to education. Without such subsidies half of future oil production in the US would be unprofitable.

As for coal, even the Wall Street Journal admits that US coal simply can’t compete on a level playing field, and is losing out despite its major subsidies. Studies reveal that without regulation to shield them from market forces, about half of the coal plants in the US would be going bankrupt.

The fossil fuel industry is increasingly relying on the heavy hand of the government to protect fossil fuels from competition. Subsidies and protective policies shield fossil fuels from the reality that renewable energy has become the cheapest energy source worldwide.

Global fossil fuel subsidies are so large, that if redirected, enough money would be available for investments in clean energy and energy efficiency needed to meet the Paris Climate Agreement targets.

The IMF estimates that eliminating fossil fuel subsidies could free up US$2.9 trillion in government revenue annually. That amount is more than double the annual investment of US$1.25 trillion the International Energy Agency estimates is needed by 2035 in clean energy and energy efficiency to stop the world from warming by 2°C.

To meet the much safer target of keeping warming to 1.5°C, would only require an additional $460 billion per year in clean energy and energy efficiency investments. 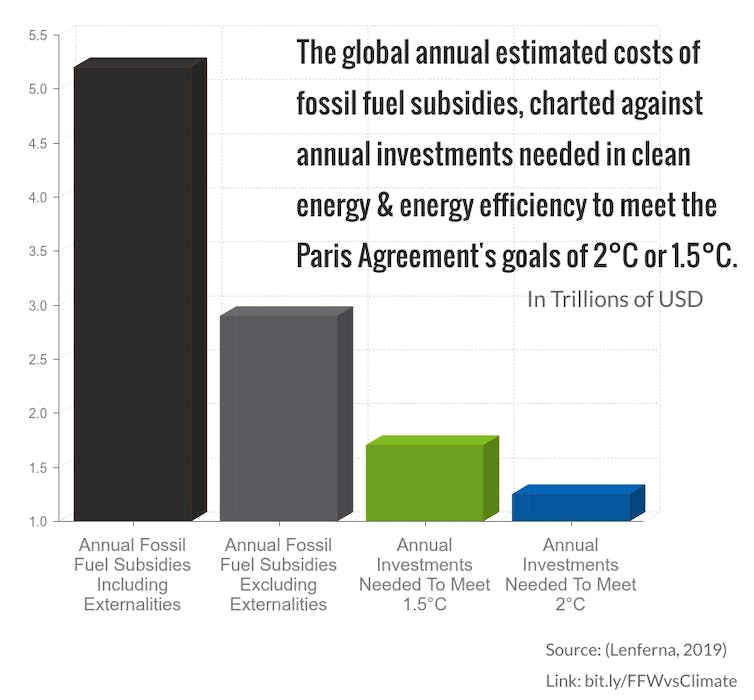 Far from climate action being too expensive, the polluting status quo is costing the world more than a clean energy future, even if we only look at the subsidies given to the fossil fuel industry and ignore the staggering amounts of harm fossil fuels cause.

It’s time we rid ourselves of the notion that what underpins the climate crisis is the operation of free markets. The markets that drive the climate crisis are far from free. Rather, the heavy hand of government is driving the world towards the brink of climate chaos and will also be needed to avert further climate destabilisation.

How Africa Could Leapfrog Fossil Fuels to Clean Energy Alternatives

By Alex Lenferna, originally published by The Conversation

Energy and the Financial System: What Everyone Needs to Know… and Work Darn Hard to Avoid

Betting on Climate Failure: The Ethics and Economics of Fossil Fuel Divestment