Walking down the high street of a place described as one of the UK’s most ethical towns, the first thing you notice is the absence of national chain stores and fast food outlets. Instead, you find a diverse mix of independent shops selling organic food, clothes, art, antiques and furniture, as well as cafes and restaurants and an abundance of charity shops.

This is Totnes – a small, historic market town in the south-west of England that has garnered a reputation as a thriving hub for art, music, theatre and alternative lifestyles. Noticeboards around the town advertise everything from yoga lessons to Zen meditation, together with posters for various events – including the next Extinction Rebellion non-violent direct action training session.

In many shop windows today, there are stickers which read “Totnes pound accepted here”. Sadly, after 12 years of operation, the Totnes pound will come to an end on June 30, 2019. This highly symbolic initiative inspired other local currencies including the Bristol pound and the Brixton pound, which encourage people to spend locally and keep money in the community. 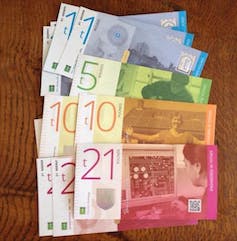 But the gradual shift to a cashless society and a lack of uptake by local government agencies have ultimately led to the Totnes pound’s demise. Rob Hopkins – co-founder of community-led charity Transition Town Totnes and initiator of the local currency – thinks the Totnes pound has helped to build a sense of community and strengthened the town’s identity, with the £21 note reflecting the local sense of humour.

The impact of austerity

The Totnes pound is just one example of the kind of outside the box thinking that has kept this local community resilient in the face of austerity. Since 2010, the pressure on local authority budgets across England has been intense, with a 50% decline in central funding support. The result has been cuts to public services and less money circulating in local economies.

In Totnes – as elsewhere – there are visible signs of these trends, with the closure of local bank branches and “to let” signs on vacant shops. According to Francis Northrop, former manager of Transition Town Totnes, smaller rural communities like Totnes face difficulties because they lack the economies of scale which make cheap goods and services more accessible in big cities.

Totnes has responded by developing a new ethical economy that puts community values at the core. The closure of the Dairy Crest factory in 2000 convinced many locals that the answer was not to wait for inward investment from big businesses outside of the town. Instead, the focus is on internal investment: harnessing community wealth to address community needs.

But unlike anti-austerity efforts seen in larger cities – such as Preston – a small town like Totnes cannot rely on anchor institutions including local government, universities or hospitals, to redirect their spending into the local economy.

Indeed, one such institution – Dartington College of Art – relocated to Falmouth in 2010 with the loss of an estimated £6m a year in local spending from 900 students and staff. Instead, Totnes has had to show it’s possible for small towns to withstand such losses, by drawing from a toolbox of different methods to build community wealth.

The response has grown from more than a decade of community trust building, since the launch of Transition Town Totnes in 2006. Initially set up to promote local resilience in the face of climate change and peak oil, Transition Town Totnes now coordinates an extensive range of local projects, and forms part of a global Transition network, with initiatives from around the world sharing knowledge and ideas.

Some of these projects focus directly on combating the effects of austerity. For example, Caring Town Totnes is a collaboration of around 80 organisations seeking to counter the impact of budget cuts on local health and social services. 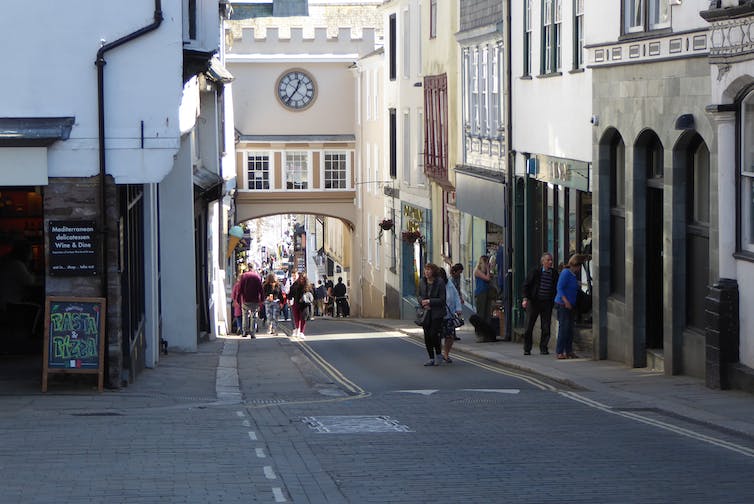 Current Transition Town Totnes manager Jenny Gellatly is also working with the Common Cause Foundation to explore how it may be possible to place compassionate values at the heart of the future transformation of the town. During a recent visit for my research, she explained to me how initiatives like these promote caring for neighbours, friends and family, to help ensure that the most vulnerable people in the community get the support they need.

Other projects focus on building up the local economy and making it more self-sufficient. An important breakthrough came with the launch of the Reconomy Center, to support new enterprises and promote local investment. The centre hosts an annual Local Entrepreneur Forum to crowdfund low carbon, ethical and sustainable business projects.

A number of organisations also came together to produce a Local Economic Blueprint, which highlights the economic benefits for small independent businesses in Totnes of sourcing goods and services from other local businesses and suppliers, to ensure more money circulates in the economy.

The next critical step was the launch of the Totnes Community Development Society – a not-for-profit that raises funds and implements local development projects. It’s currently implementing the Atmos Totnes project, to transform the disused Dairy Crest site into a school for food entrepreneurs and a business incubator, with affordable housing.

In the face of severe challenges, Totnes has shown how a community can mobilise to achieve a more ethical and resilient local economy. It will be fascinating to observe how the town changes in the years ahead, and to see what the next initiative will be, to replace the Totnes pound.

Japan as the new normal: Living in a constrained economy