A June 15th headline elicited feelings in me of both shock and déjà vu: “Climate change: Arctic permafrost now melting at levels not expected until 2090” [Independent, June 15, 2019].  Shock because that’s quite a bit ahead of time. Déjà vu because how often does a climate change headline or story use a phrase like that? “At levels not expected until” or “faster than expected” or “sooner than predicted”? I opened a search engine and started plugging in these and other variants to find out. It didn’t take long to answer my question: regularly, as it turns out.

Here are a few examples, from 2014 to the present [all emphasis is mine]:

So why does this keep happening? There are several reasons:

In the contrast between reality and predictions, the conventional baseline for predictions is set by the IPCC, the United Nations Intergovernmental Panel on Climate Change. For governments, NGOs and media, the IPCC reports are the institutional yardstick.

However, the bureaucratic process that produces IPCC reports is not exclusively scientific. Final documents are created by consensus among all the participants, some of whom are policy-makers without scientific backgrounds or knowledge. Political concerns come into play, such as how the recommendations will affect their home industries and what kind of story they’re trying to sell to their populace. Additionally, because this process is slow, the data is not current. When an IPCC report is released, the numbers in it are often at least five years old.

In describing how the IPCC operates, Meteorologist Nick Humphrey said: “Essentially making sure it’s not too dire [and] shows economic paths to success.” Clearly, such methodology has been giving us a picture that underestimates the true situation, and that is not in anybody’s interest.

#2: The Situation is Complex

Though the over-arching term is “global warming,” the situation isn’t as simple as consistently increasing temperatures in all areas all the time. For example, a warming Arctic has destabilized the jet stream, and in some cases this has sent polar air south, chilling regions to below their normal ranges. Such local cold snaps are not the proof that global warming isn’t real, as some claim when they happen, but rather a demonstration of how real it is.

Further, multiple feedback loops are in effect which are not fully understood or easily predictable individually, let alone in the aggregate. For example, less ice in the Arctic Sea leads to more heat being absorbed by the ocean (since open water is darker in color than ice), which in turn leads to higher temperatures. Higher temperatures in the region lead to more permafrost thawing, which releases methane into the atmosphere, increasing temperatures further. Which leads to more ice melting… (For more, see Dahr Jamail’s “How Feedback Loops Are Driving Runaway Climate Change.”)

Those are only two of many, many factors—all interrelated in ways we don’t understand—that all have their own “tipping points,” which are events when runaway change strikes, leading to rapid transformations. We have yet to experience one of those in modern times, but paleoclimatologists have found evidence of these events in the past. (The last such period, the Younger Dryas—12,900 to 11,700 years ago—corresponds to the rise of agriculture in the Mideast, which—ironically—established both civilization and ecocide, leading us directly to our sorry situation today.)

A little-discussed and poorly-understood factor in all these trends is climate sensitivity, and the difference between short and long term sensitivity. For a brief explanation, I quote Peter Wadhams, Professor of Ocean Physics, and Head of the Polar Ocean Physics Group in the Department of Applied Mathematics and Theoretical Physics, University of Cambridge, who commented:

“There is a big difference between the short term sensitivity, which is used to calculate warming over a few years, and the long term sensitivity which represents how much warming the earth is going to be subjected to if you don’t add more CO2 but let the effects of the present levels work their way fully through the climate system. Short term sensitivity is 2-4.5 C, but long term is more like 10C. The crime of IPCC and other modelling outfits is that they are aware of this difference between short and long term, but still use the short term value even when they are doing hand-waving studies of what is going to happen over the next century or two.”

“Climate change is an interdisciplinary problem,” is how Humphrey puts it. “Marine biologists, conservation biologists, sociologists, political scientists, geologists, meteorologists, glaciologists, etc, really fill the gap where the climate scientists do not go because it simply isn’t their specialization or have the time to go in their research.”

The increasing specialization of the sciences and the isolation of its many branches from each other is a trend that has been happening for over a century, and has become extreme at this point. There is a tendency not merely to miss the forest for the trees, but the trees for the leaves.

In order to fully comprehend, accurately predict, and rationally respond to our situation, we must look at the big picture—how the leaves make up the forest—but very few people are doing that. This is a job for generalists capable of integrating seemingly disparate but—in actuality—intimately connected threads, and of clearly conveying what they see. However, neither academia nor the employing world encourage generalists at this time; quite the opposite, in fact. Virtually the only way to find your place and make your way in the sciences is by establishing a niche. This is not serving us.

#4: No Money for Predicting Undesirable Outcomes

Researchers require resources to do their thing, which nearly 100% of the time entails pleasing an institution, whether that’s an employer or a grantor. Such funders have their own agendas, and few (if any) are interested in hearing about unhappy endings.

#5: Scientists Hit the Hopium Pipe Too

Finally, scientists are products of our culture just like everybody else, and our culture is primarily one of denial, whether that’s about the reality of our past (genocide and slavery) or our present (brutal military and economic hegemony, inverted fascism). Most scientists not only don’t want to deliver a dire message, but they don’t want to believe it themselves either, even if that’s what their findings show. This is understandable on a personal level. Scientifically, though, it is fundamentally dishonest. 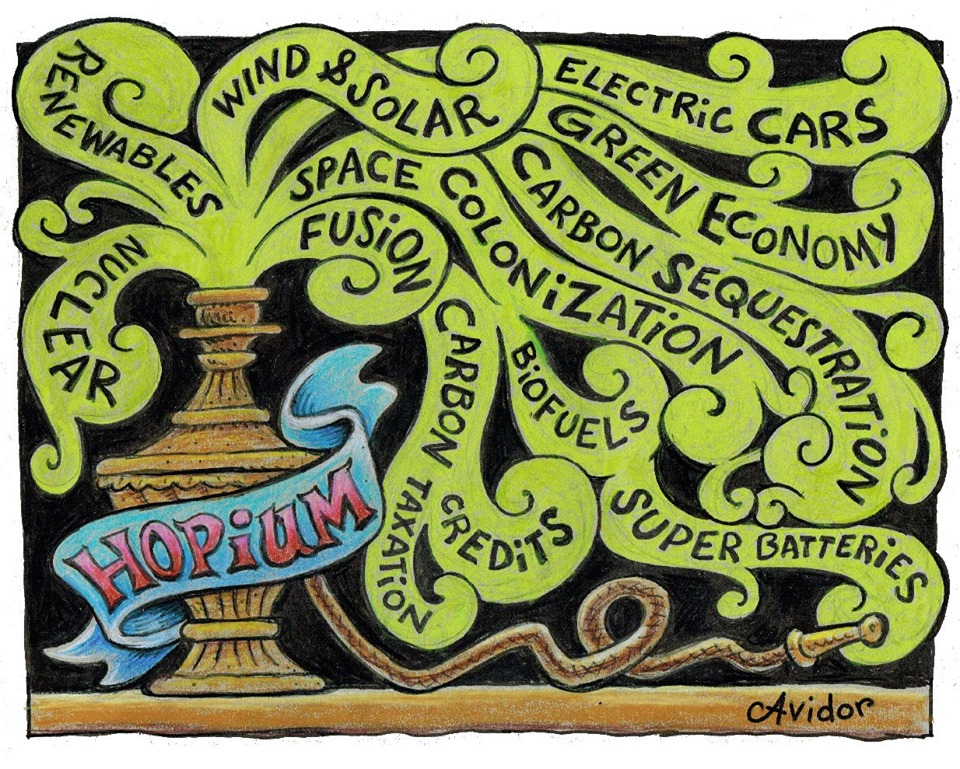 Cartoon by Ken Avidor. More of his work can be found at Bicyclopolis.

Okay, so then what?

It’s increasingly clear that our situation is worse than we’ve been told, perhaps far, far worse. One can choose to scoff at those predicting drastic outcomes like near-term human extinction, but how does one support that kind of skepticism when “reasonable” projections have so far proven to be woeful underestimates?

But when it comes to making accurate predictions, maybe it’s no longer important. Perhaps the lesson here is just that it’s worse than we think and worse than we want and—we must consider this possibility—worse than we can fix. So then our challenge is to accept that and to take responsible action.

If you hit someone on the road, the responsible action is to go back and see how s/he is.  It’s fair to describe US culture as a high speed vehicle striking one innocent creature after another without ever looking back, individually or collectively. This is untenable in a host of ways, and always has been.

Acting with malice takes a toll on both perpetrator and victim. In our case, the victim is the planet and she’s turning the tables on us, on her own schedule, whether we see it coming or not. Heads up!