Apologies that I’ve been so silent of late on this blog. I’m afraid my book-writing chores are consuming almost all my desk-time at the moment and posts will probably continue to be sporadic at best until my submission deadline in the autumn. But let me at least bring you a sneak preview of some graphs I’m planning to present in the book (…and a couple that I’m not … thanks are due to my editor Brianne at Chelsea Green for allowing me to let the cat out of the bag). I’d be interested to hear any comments on my interpretations of the data I present below.

First, some context. I’ve long expressed my skepticism on this blog for various types of business-as-usual solutionism that suggest the numerous problems we face in the world are fixable within existing political and economic paradigms, usually through some kind of high-tech whizzbangery associated with the capitalist political economy, a broad current of thought sometimes known as ‘neo-optimism’. I don’t necessarily think all neo-optimist whizz-bangs are intrinsically a waste of time, but we need a Plan B … and this, I think, is a small farm future, which I suspect may well become Plan A. What would stop it from becoming Plan A is if someone could convincingly demonstrate that (a) the existing capitalist political economy is clearly the best bet for improving general human wellbeing, and (b) it can do so long-term in a planetarily sustainable way. Neither of these are easy to prove or disprove, especially (b) as it involves projecting into the future. I’m not going to address (b) here – perhaps I’ll try to answer it in a future post (Spoiler: … my guess is that the answer is a two-letter word beginning with ‘n’). But I’d like to say a little about (a).

A staple of neo-optimist fare is that we no longer live in a binary world of rich and poor countries – “the west and the rest”. Hans Rosling calls this binary view a “mega misconception” that belies the catch-up that’s been occurring in recent decades. “Poor developing countries no longer exist as a distinct group…” Rosling says, “there is no gap…This is not controversial. These facts are not up for discussion” and so on1. Along similar lines, Steven Pinker writes “Industrial capitalism launched the Great Escape from universal poverty in the 19th century and is rescuing the rest of humankind in a Great Convergence in the 21st”2.

There are many ways of trying to prove or disprove such statements. Saying they’re not up for discussion is a neat one, because it exempts you from any dialogue about the limitations of your analysis and whether you’ve cherry-picked your examples. But let me discuss these assertions anyway – I’m going to put it to you that Rosling and Pinker are wrong.

Exhibit A in my argument is a plot of Gross Domestic Product per capita. Now, I know that GDP is widely and rightly criticized as a measure of human wellbeing (I’ll look at a different measure of wellbeing in a moment), but it’s not so shabby as a measure of the formal economic output that the industrial capitalism of which Pinker speaks excels. So if a Great Convergence is occurring within humanity in the 21st century fueled by industrial capitalism I think it would be reasonable to expect to see it in GDP per capita at the country level. What I’ve done in Exhibit A is take GDP per capita (in constant 2010 US$) for every country in the world from World Bank data and ranked them from highest (which, as it happens, is Luxembourg at $191,587) to lowest (Burundi, $219). Then I aggregated them into five groups on the basis of this ranking and calculated the average GDP per capita for each group for every year between 1960 and 2016 (the full time-range available in the World Bank data), weighted by the population sizes of each country in the group. So that’s what you’re seeing in the graph. 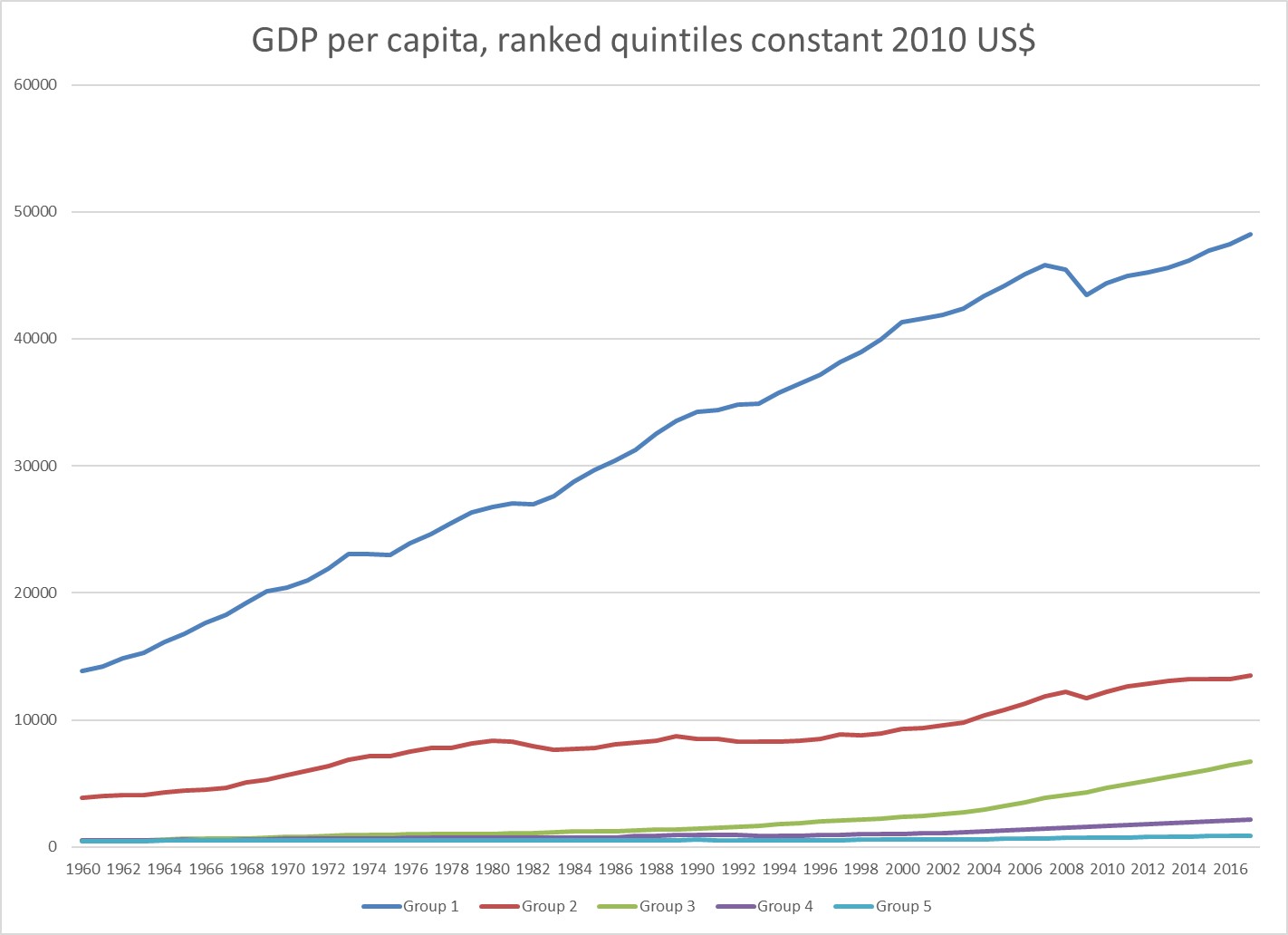 I struggle to reconcile this graph with Rosling’s pronouncement of the death of the gap and Pinker’s pronouncement of a ‘great convergence’. Each of the five groups has improved its GDP per capita, and Groups 2, 3 and 4 show some evidence of a climbing rate in recent years. But it seems to me that the most compelling story told by the graph is how much Group 1 has pulled away from the others. In 1960 the ratio between Groups 1 and 5 was 30. In 2016, it was 55. The ratios between Group 1 and Groups 2-4 over the same timeframe have narrowed, but the differences have greatly increased. I often commit what Rosling calls the ‘mega misconception’ of talking in binary terms about ‘rich’ and ‘poor’ countries. This graph makes me feel justified in doing so.

Rosling cautions in his book against the way that averages can mislead us, so lest Exhibit A leaves you in doubt I present Exhibit B which shows the full ranked distributions of GDP per capita for every country in 1985 and 2016 (the 2016 data in the red stretches out rightwards because there were more countries and less missing data in 2016 than in the blue 1985 line). Again, the picture seems pretty clear to me – a long shallow slope suggestive of lots of countries with similarly low GDP per capita, then a steep uptick on the right for a small number of countries with very high per capita GDPs. Maybe it’s reasonable to talk of ‘middle income’ countries in the light of Exhibit B. But I think talking in binary terms of ‘rich’ and ‘poor’ countries is eminently justifiable on the basis of these figures too. Perhaps it’s worth noting that of the forty countries in Group 1 all but six of them are either West European ones or postcolonial inheritors of a West European legacy (like the USA and Australia) – the six exceptions are Qatar, Singapore, Japan, the United Arab Emirates, Kuwait and Brunei, which have their own historical stories to tell. 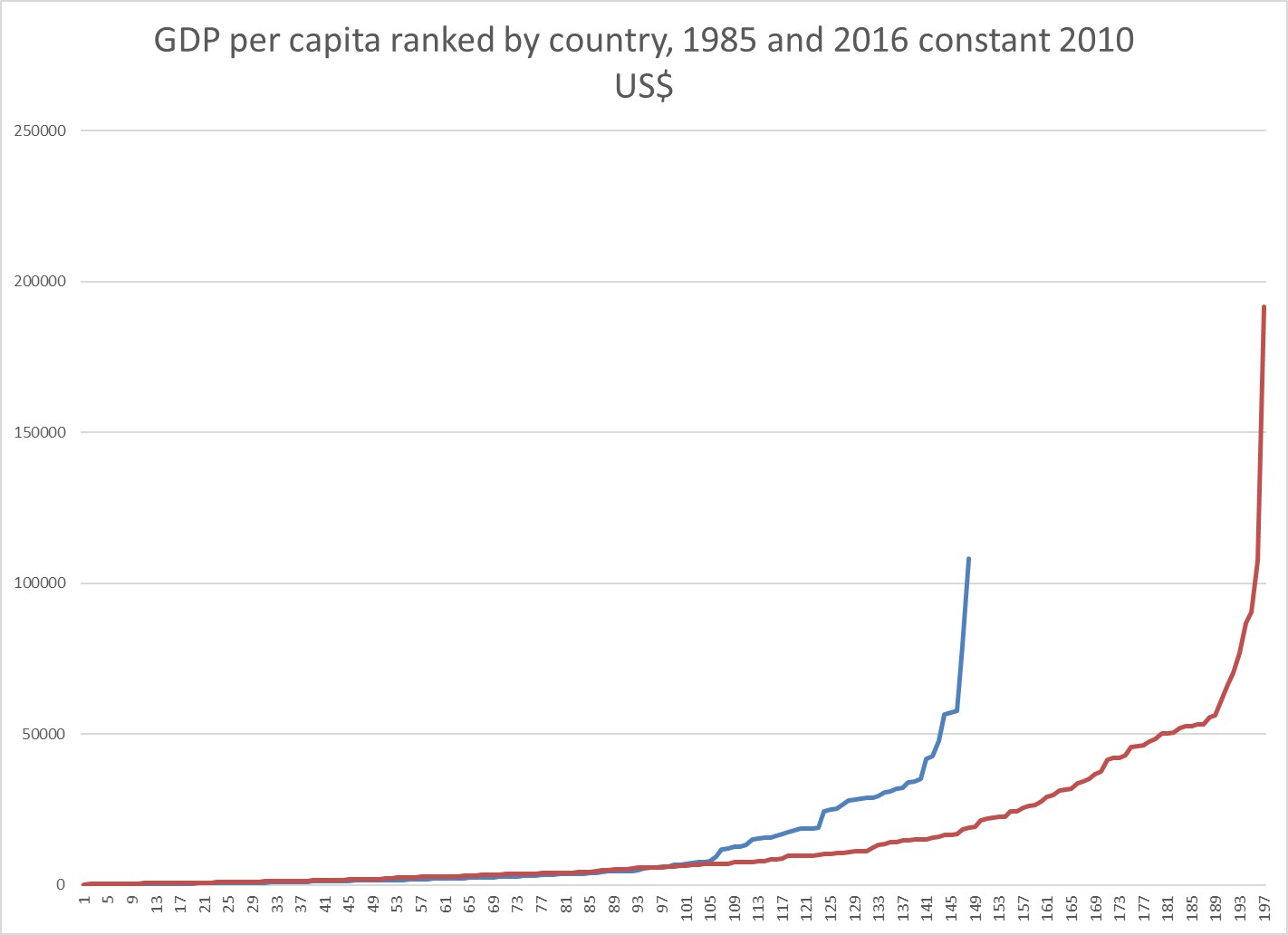 I’d suggest that there are usually different stories one can weave around data, and it surprises me that the likes of Rosling and Pinker who are supposedly expert data analysts don’t make more concessions to this. Is there a fitfulness to their factfulness?

So much for GDP. Let’s move on to life expectancy – a more direct measure of human wellbeing, albeit still of a rather crude and basic kind. In Exhibit C, I present population-weighted average life expectancy at birth for the same five groups defined in Exhibit A from 1960 to 2017. Here, there does seem to be some evidence of convergence – in 1960, average life expectancy for Group 5 was 42 whereas for Group 1 it was 70. By 2017 the corresponding figures were 65 and 81. 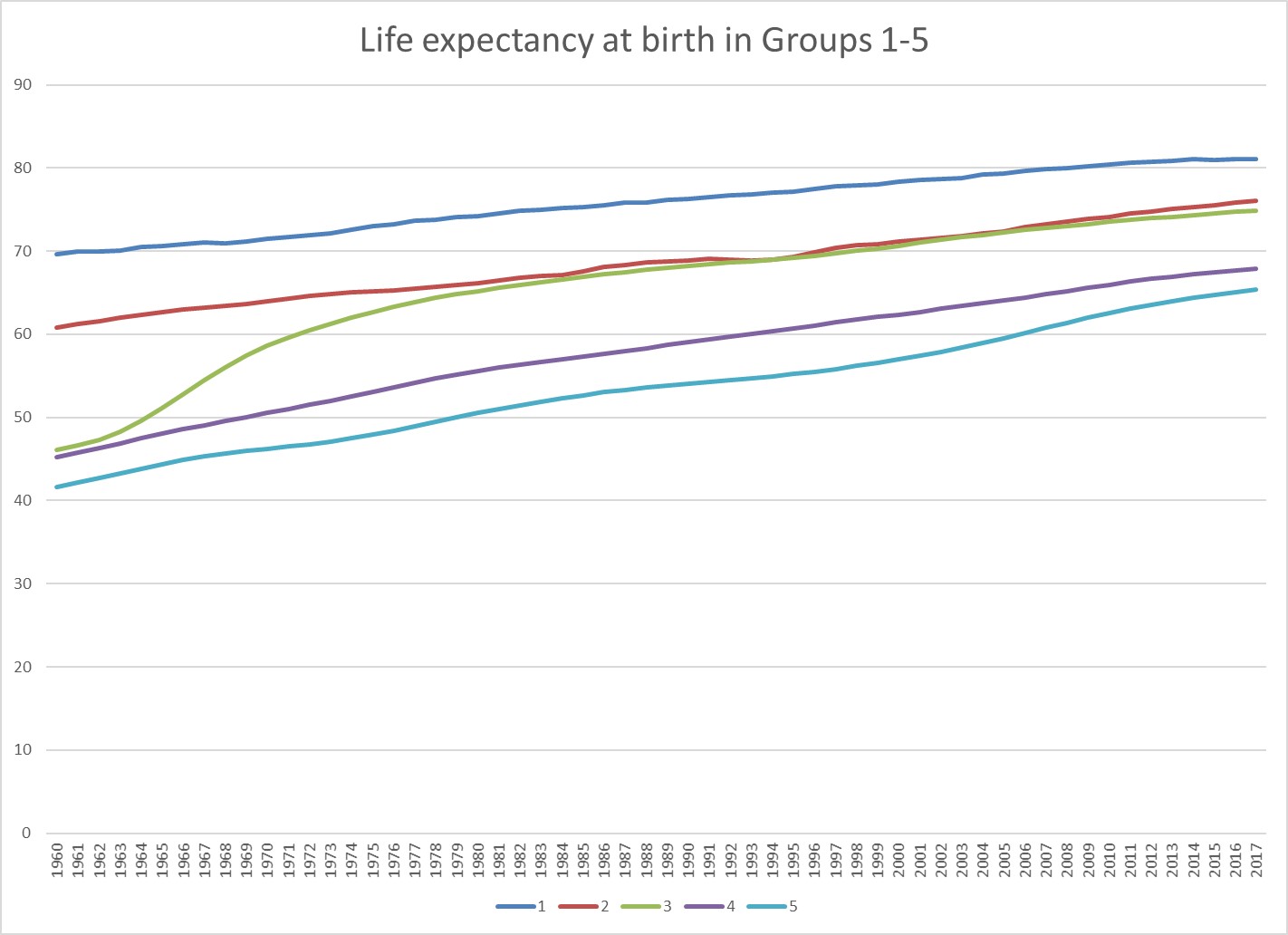 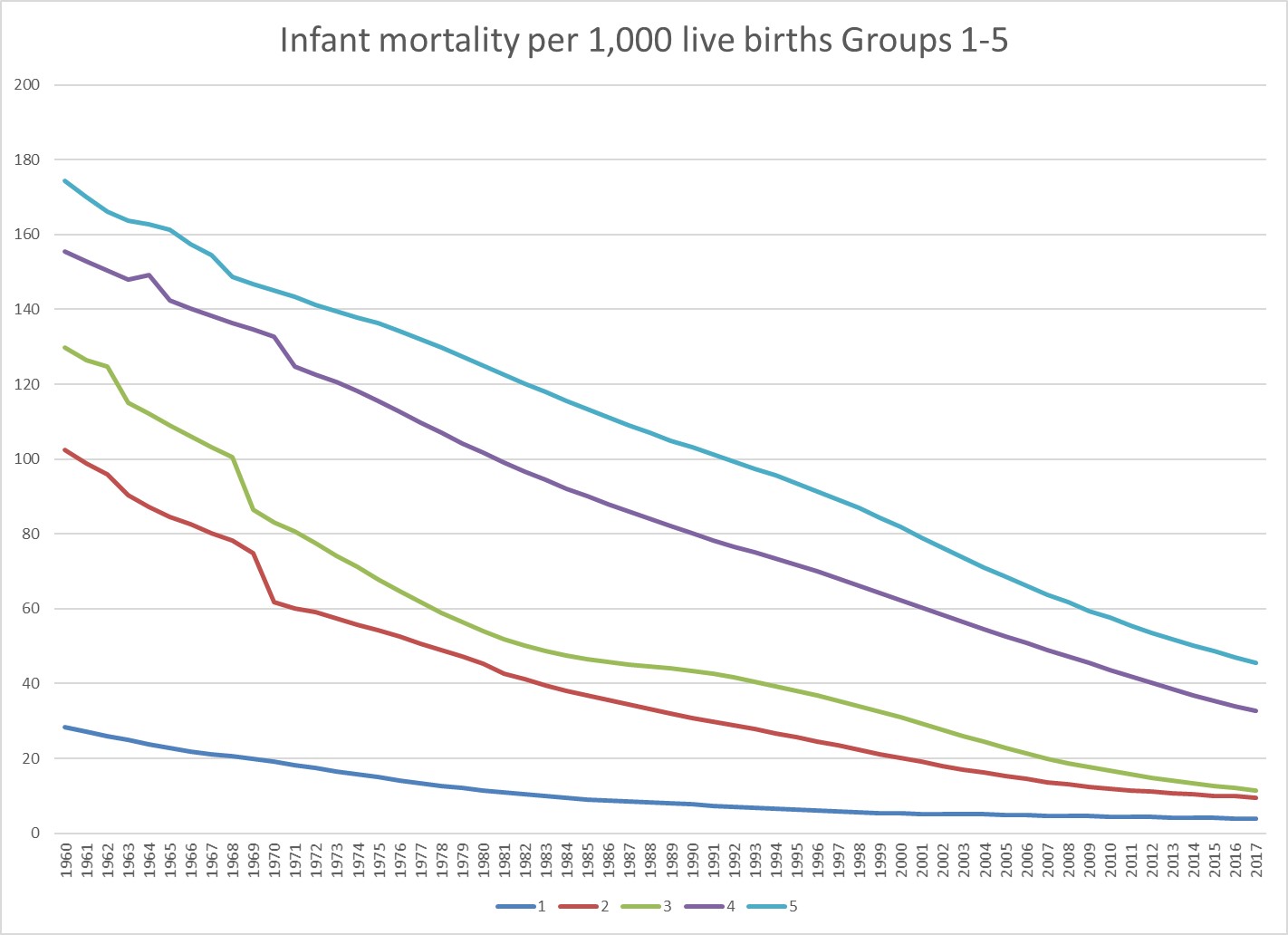 China. The most striking improvement in life expectancy shown in Exhibit B occurred in Group 3 in the 1960s, and this largely reflects the influence of China in view of its huge population. This was the China of Chairman Mao and his Cultural Revolution – which hardly seems a good advert for Pinker’s view that the convergence results from ‘industrial capitalism’. But maybe there are some complexities here. The improvements in China came hard on the heels of Mao’s disastrous ‘Great Leap Forward’ which was the cause of probably the biggest famine in human history, so the thought occurs that the 1960s uptick could be a kind of rebound from the famine. However, this paper at least seems to suggest otherwise – infant mortality in China crashed during the 1950s, spiked during the Great Leap famine (though without reaching pre-1950s levels) and then further crashed in the 1960s. Lynn White has argued that the roots of China’s recent economic miracle lie ‘bottom up’ in the chaos of the 1960s in the context of the Cultural Revolution and the aftermath of the Great Leap when the lack of political control from the center enabled rural people to engage in economic development that was later coopted by the state and is now often presented top-down in terms of Deng Xiaoping’s reforms3. In that rather special sense, perhaps it would be possible to assimilate the Chinese data to Pinker’s claim that the convergence results from ‘industrial capitalism’. But I think that would be quite generous to Pinker. I’d be inclined to say instead that “rural self-reliance launched a great escape from poverty in China”.

What’s the cause of declining infant mortality? Having trawled around various academic papers on this subject the tentative answer that I’ve come to turns out to be the same as the answer to most things – it’s complicated. Relevant factors seem to be things like access to basic primary health care, vaccination and mother’s education. I’d welcome further input on this. Possibly, one could argue that such factors have been delivered by ‘industrial capitalism’, if not in the relevant countries themselves then at least in the accumulation of global surplus that enables multilateral agencies, NGOs and other such organizations to intervene. But I think this would be tendentious without further substantiation, and it would require a good deal of detailed analysis that tracked the historic flows of resources into and (mostly) out of the poorer countries with high infant mortality. As I’ve written about in more detail elsewhere, the history of capitalism and ‘modernization’ generally seems to involve processes of huge immiseration that then prompt counter-movements and efforts towards humanitarian mitigation – to chalk these up as the positive achievements of capitalism is provocative, to say the least. Basically, capitalist societies are ones that entrust general social wellbeing to a small number of capital owners who compete to maximize their profits with fairly minimal restrictions on what they’re entitled to do with them. Industrial capitalist societies are ones where the competition is focused around manufacturing rather than, say, speculative finance as is now the case in many of the Group 1 countries (here I’m paraphrasing some of Wolfgang Streeck’s definitions4). Nothing much to write home about in all that about converging life expectancies… In fact, if we’re going to talk about a ‘great convergence’ in the 21st century we probably also need to talk about the ‘great divergence’ of the 19th century diagnosed in a 2001 book of that name by historian Kenneth Pomeranz.

The inefficiency of capitalism. In 1960 world GDP was $11.3 trillion in constant 2010 US$, while in 2017 it was $80.3 trillion – so in less than 60 years the global economy has grown to fit more than seven world economies of 1960 within itself. In per capita terms the corresponding figure is an almost threefold rise from $3,700 to $10,700. Infant mortality rates in 1960 averaged 28.4 deaths per 1,000 live births in the Group 1 countries and 174.3 in the Group 5 ones, whereas by 2017 the gap had narrowed to 4.0 in the Group 1 countries and 45.7 in the Group 5 ones – a welcome convergence, certainly, but a “great” convergence, in view of the fact that the global economy is more than seven times bigger? I’m not so sure. Going back to my original question, if we have to grow the global economy seven times over in order to move from 146 excess infant deaths between Groups 1 and 5 to 42 excess deaths, I’d question the view that industrial capitalism is the best bet for improving human wellbeing – especially when it’s not even clear that the convergence results from capitalism as such.