Raahgiri Day is one of the world’s most recognizable open streets events—a weekly event in which residents of Delhi, India reclaim their streets from cars.

From the very start, Sarika Panda Bhatt, Founder Trustee of The Raahgiri Foundation, has been at the epicenter of this movement. Nidhi Gulati, Program Manager for Transportation here at Project for Public Spaces, spoke to Sarika about the rapid growth and expansion of this street-level revolution. 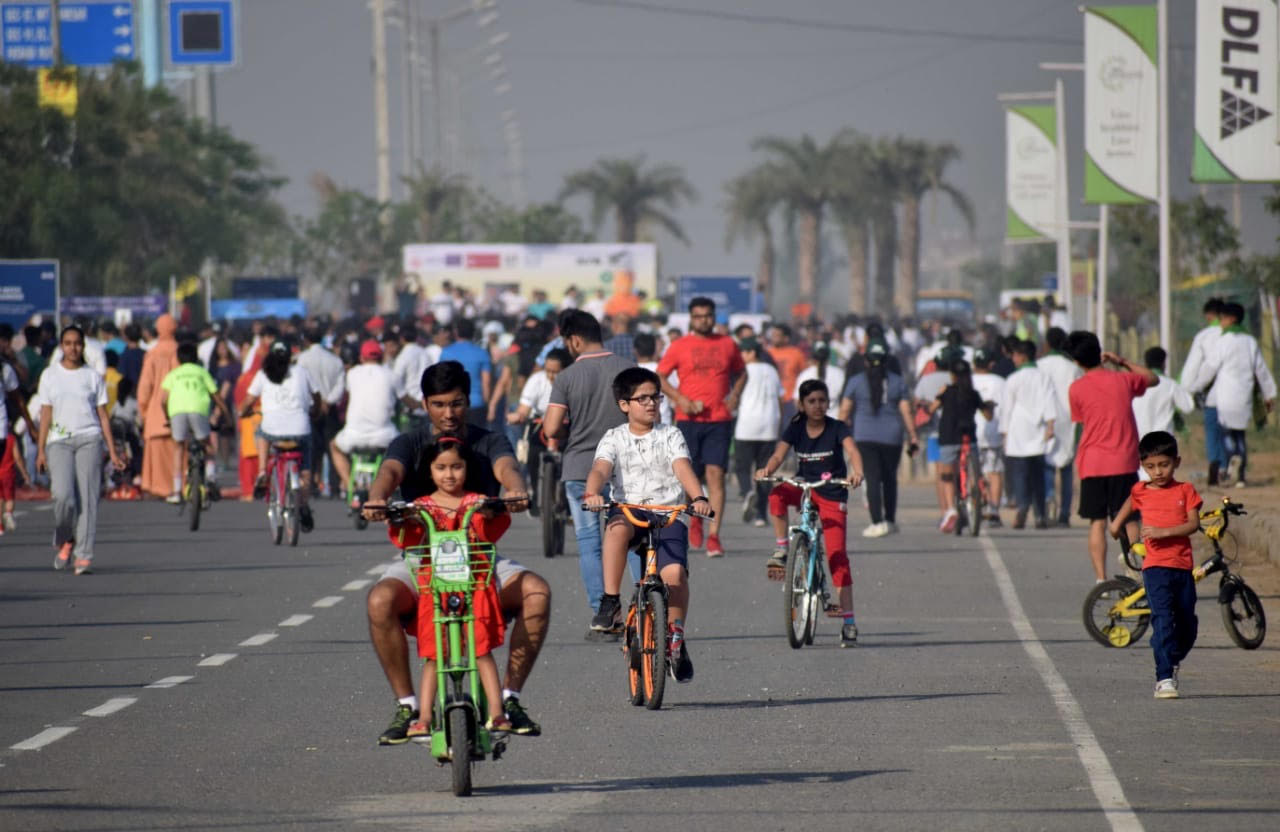 Cyclists and pedestrians of all ages take over the streets of Gurgaon/Gurugram in Haryana. Photo Credit: Sarika Panda Bhatt

Q: Raahgiri has turned into a revolution of sorts, reclaiming streets for people. How vast is the reach of this initiative and how did it spread to so many cities?

A: As of November 17th 2018, which was the official 5th anniversary of Raahgiri, it has been implemented in 72 cities in 18 states across the country. Three big things favored the rapid expansion of this initiative: location, media, and advocacy. The New Delhi metro area is the heart of urban innovation in many ways. Other cities and towns tend to want to replicate successful initiatives that worked in our favor, especially when Raahgiri spread to Connaught Place from Gurgaon. Additionally, media channels like NDTV, Times Media and all other local and national media allocated generous amounts of time covering Raahgiri and that added to the allure. However, it takes more than an engaged and energized citizen base to make this happen. To back this up, Nasscom, civic society groups, and the World Resources Institute’s (WRI) India office worked on the advocacy side to build support with local governments for closing their streets to traffic.

It was a chain reaction from that point on. When the Smart Cities initiative was launched by the Federal Government, Raahgiri was already acknowledged as a proven tactic for building support for multi-modal streets and promoting active lifestyles through the built environment. As a result, many cities adopted Raahgiri to fulfill certain Smart Cities commitments. Our shining example of statewide success is Haryana. The Chief Minister of the state became a champion and advocate for Raahgiri and all 22 districts in the state have now started Raahgiri. It isn’t mere serendipity that all these districts also have Vision Zero mandates that involve ground-level change towards zero fatalities on the roads. 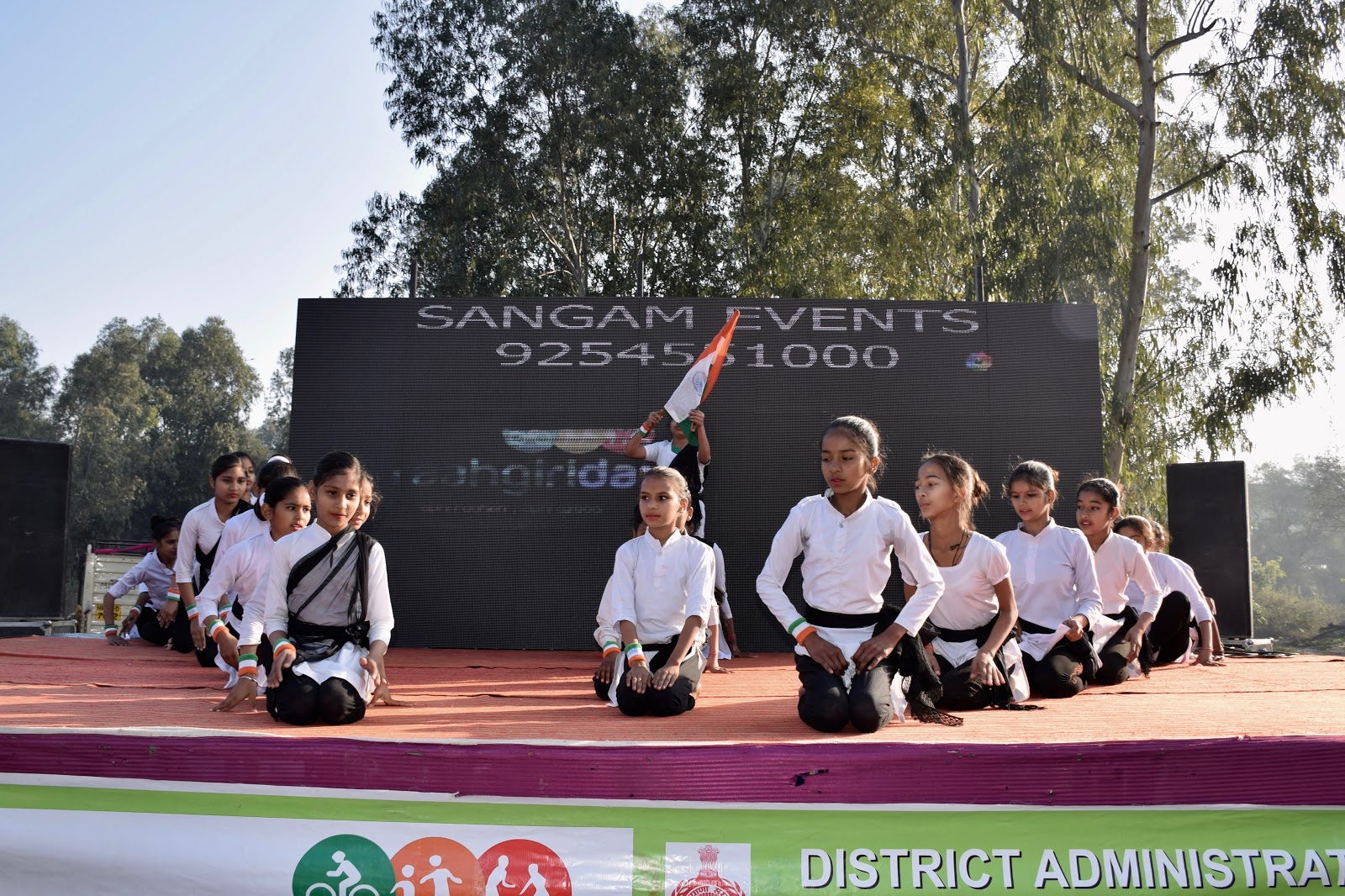 Q: We understand some of the commonalities among the various local initiatives—key streets closed to traffic during certain times of the weekend and opened up for people walking, cycling, playing, dancing, etc. What are some of the key differences between the numerous Raahgiris and their host cities?

A: I can think of some aspects that vary significantly from place to place. One would be community engagement, and the types of tactics used for community engagement that vary depending on who is the local leader on the initiative. So the level to which citizens are engaged in the implementation varies a lot too. For example, in some places people are enthusiastic to support the actual roll-out, while some other times they think it is something created for them and they should merely let the team handle it. Another aspect would be administrative support. Not all initiatives have a champion politician or a public agency taking charge of the planning and administrative tasks. The success of each initiative depends heavily on these types of roles and they are often why we see anywhere from 15 people to over 10,000 people attend a Raahgiri. Lastly, different initiatives can vary in their intended outcomes. Not everyone is thinking long-term with their initiative. In some places, it is only looked at as a fun event, while others are geared towards changing behavior and the built environment. Ideally, we would like to make all initiatives outcome-based, as part of our sustainable mobility efforts in light of the urgent threat of climate change. 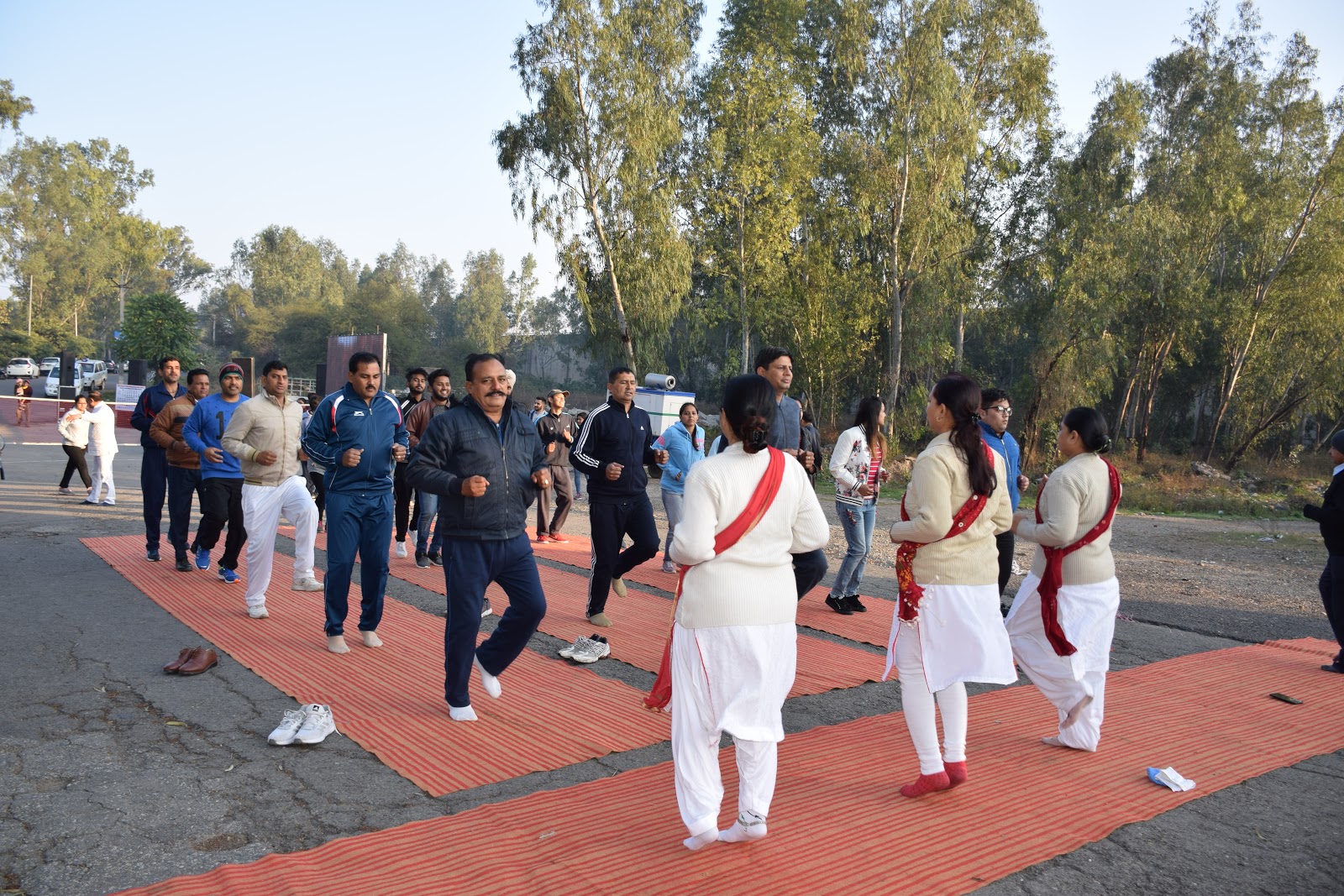 Q: As a founder trustee of The Raahgiri Foundation, to what basic characteristics and processes do you hope all these initiative adhere?

A: Active living and commuting habits. We want all Raahgiris to create opportunities for people to cycle, walk, jog, run, and play. In rapidly urbanizing cities designed around the automobile, we hardly get the opportunity to do any of these safely. And in the absence of safe infrastructure to engage in these activities, we can’t expect people to ask for more. People tend to advocate for things they are familiar with, and active living has systematically been taken out.

Cultural programming is another must-have and it can be incorporated in various forms, like performances, exhibits or infrastructure for self-programming and expression. This is really what makes each initiative tied to its context. I also like to see some elements and topics for building awareness around road safety, sustainable urban design, as well as larger social issues like violence against women and/or children. Done right, Raahgiri can be a magnet for people and should be capitalized on for educational purposes. Safety, security and management is another element of success. There needs to be an entity bringing the barricades, closing off the streets, and setting up basic policing to ensure decorum. A commitment of at least one weekday per month and three hours has become the standard. That means the street closure has to last a minimum of three hours but many cities have extended it to five. In Gurgaon, Raahgiri is every Sunday and we are trying to motivate most cities to pursue twice-monthly frequency. 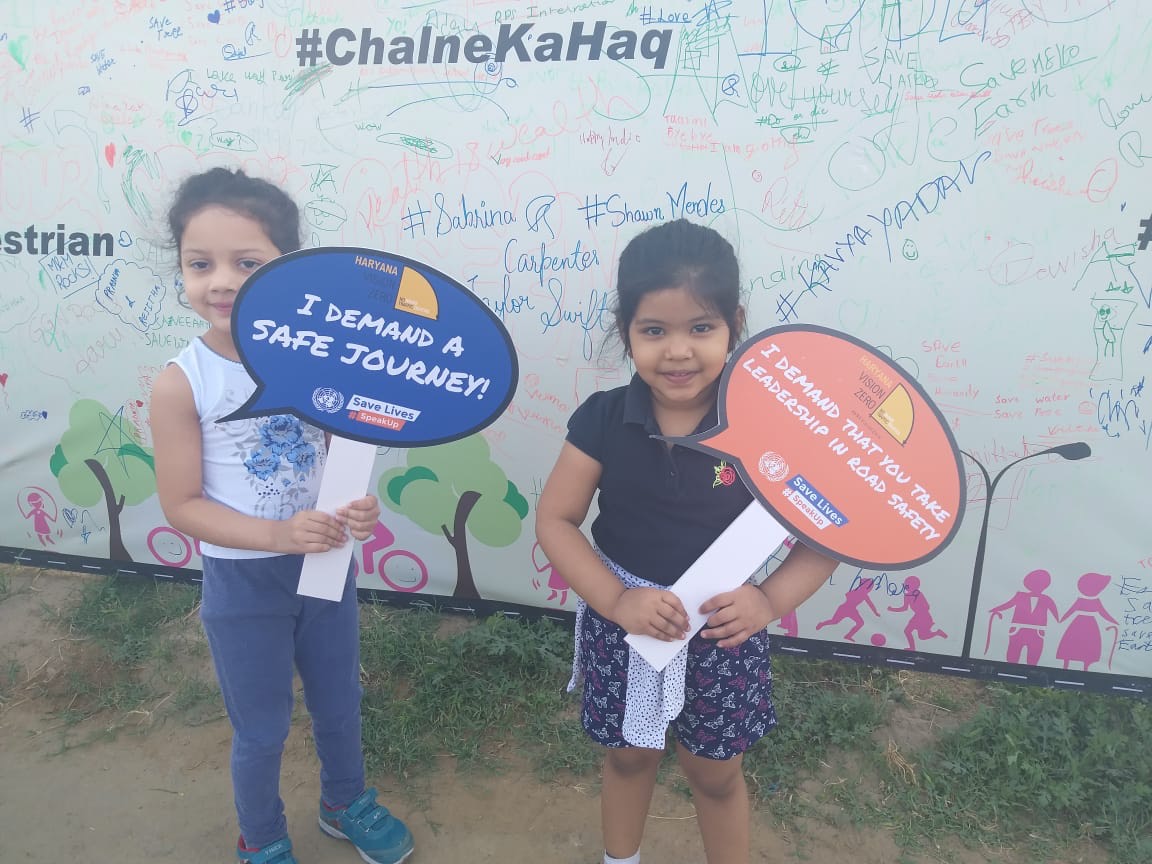 Q: While all this is great, I know how new initiatives tend to lose their charm or direction after some time.  So, what are you doing to maintain long-term relevance? In other words, how are you keeping it from becoming just another street festival?

A: We have four different strategies to maintain the momentum and get to long term change on our streets. The first is capacity building the Foundation and WRI are training local public agency staff on issues of safety and sustainability associated with our transportation system and the benefits of multi-modal streets. The Foundation is also advocating for Vision Zero and walkability for all at various levels of the decision-making food chain.  We encourage people to take pledges and become stewards of the initiative.

Secondly, we are keeping a strong focus on changing policy. There are so few mandates for city streets and their design is often dictated by highway designers. This is all true, even though we know that there need to be various street typologies for it to function optimally for most people—not all roads need to prioritize fast speeds and short travel distance. Even so, policy language and legislation alone is not enough. There aren’t clear protocols or expertise for implementation in this arena, and that is something we have to advocate for, too.

Third, we are cultivating champions and stewards of the movement, who can “walk the talk,” like politicians and corporate leaders who have begun cycling to work and encouraging their employees to follow suit. When that happens, the gaps in our funding priorities, policies, and infrastructure become clearer and clearer.

And finally, the establishing of The Raahgiri Foundation marks the creation of a home for the movement. We aim to fundraise and craft programs to address the three strategies mentioned above. Nonprofit fundraising and functioning is very different in India and we are figuring out our best path forward. We want the people to own this movement; our role would be to steer it. 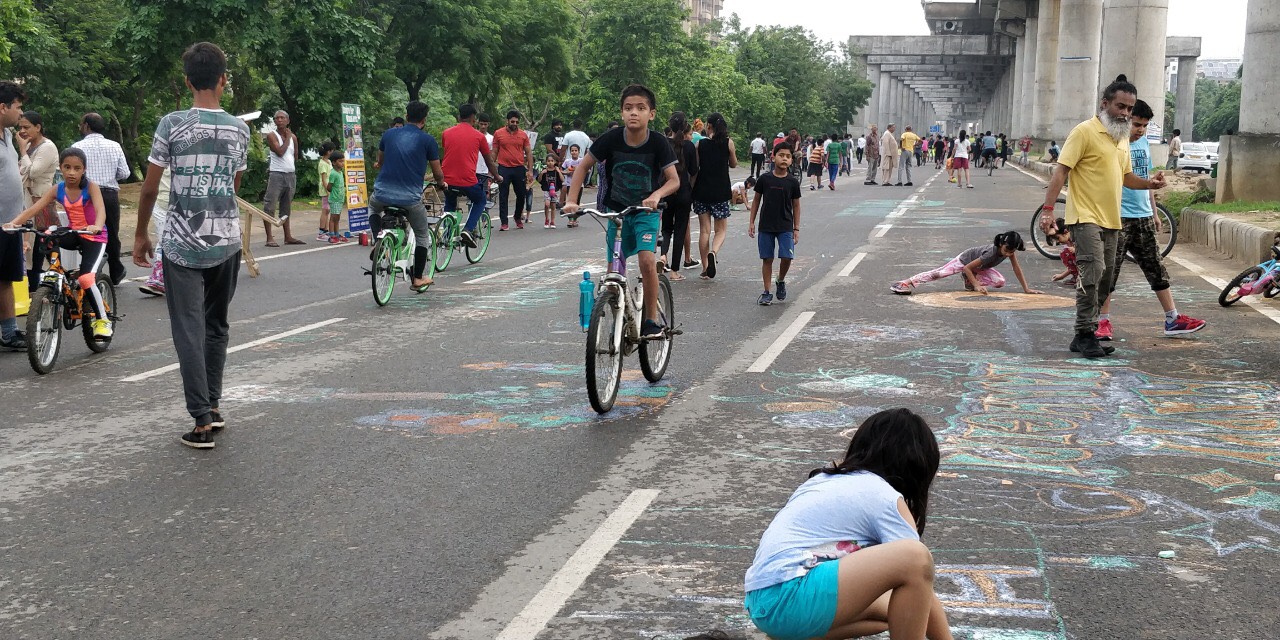 Q: This next question is very close to my heart. I care deeply about the impact of such movements and who gets to benefit from them. That being said, who is Raahgiri for? Does it align with the status quo in India where most public spaces are really comfortable for men or are you tackling gender and income inequities through this as well?

A: Raahgiri is more than inclusive, from a gender perspective. So, women are not only participating but leading and shaping the movement. You can see that in almost all Raahgiris, by looking at the number of women and girls who are there and the comfort they must feel to participate in fitness and dance classes. I have heard from women who prefer doing Zumba during Raahgiri over taking a similar class at their gym. On the other side of the spectrum are those who can’t afford to go to a gym for fitness or have access to a theatre or an audience for their talents. Raahgiri is a place for them. This has greatly improved access to public space and given a voice to women in our cities. Credit is due to the sheer number of programs that consider the needs and preferences of women and create a level of comfort for them to participate again and again. Jane Jacobs talked a lot of the power of ‘eyes on the street’ for safety and comfort, and that is exactly what we are creating.

I have a pre-teen daughter who frequently participates in Raahgiri Days; often independently. As a mother, I am more comfortable sending her to Raahgiri alone over visiting the community park. Streets are the only truly inclusive public spaces, and we are making sure that they remain that way. 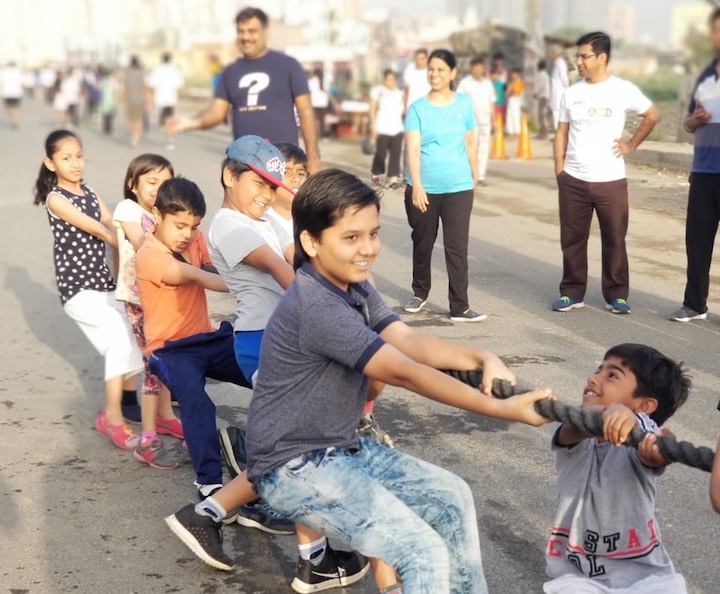 Q: What is it that drives you to do this work? When you close your eyes, what is your vision for Raahgiri and the streets of India?

A: Raahgiri 24/7 in our cities. The word ‘Raahgir’ translates into a person on a path, and Raahgiri is that person’s journey on their chosen path. We should all have the opportunity to live our best life on whatever mode we choose and at whatever pace we like. I would like to see a day in which children can freely play in our streets again. When we are not choking their lungs with automobile smoke, or spending a majority of our free time stuck in traffic. There should be a hierarchy of streets where some of them prioritize people walking, others prioritize cycling and public transit, and some are designed for private automobiles. The one-size-fits-all approach is how we got here.

A: We build capacity in our government, we build trust with and empower our communities, we continue to prove the theory with pilot projects like Raahgiri, we try and engage as many citizens as possible, we change design and planning guidelines to allow for sustainable urban mobility and development, and we stop relying on technology to solve our issues but build the correct infrastructure.