A worldwide wave of school climate strikes, begun by the remarkable Greta Thunberg, has reached the UK. Some critics claim these activist-pupils are simply playing truant, but I disagree. Speaking as both a climate campaigner and an academic philosopher, I believe school walkouts are morally and politically justifiable.

Philosophy can help us tackle the question of whether direct action is warranted via the theory of civil disobedience. This states that, in a democratic society, one is justified in disobeying the law only when other alternatives have been exhausted, and the injustice being protested against is grave.

In the case of the climate school strikes, it is without question that the injustice – the threat – is grave. There is none graver facing us.

It appears reasonable to claim furthermore that other alternatives have indeed been exhausted. After all, people have been trying to wake governments up to the climate threat for decades now, and we are still as a society way off the pace set out even by a conservative organisation such as the IPCC.

But if that claim was strongly contested, and it was suggested that climate activism should continue to focus on conventional electoral politics, then attention might revert to the assumed premise that society is democratic. Do people in Britain and elsewhere really live in “democracies”, given (for instance) the vastly greater power of the rich, and of owners of media, to influence elections, compared to everyone else? 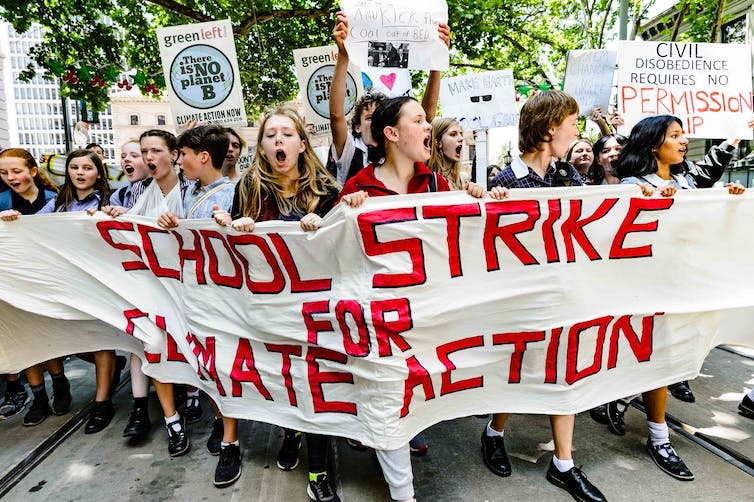 I don’t want to adjudicate whether we really live in a democracy. But what of course makes this a particularly salient question for school strikes is the simple fact that in any case children have no voice in this democratic system. And yet the climate crisis and the perhaps equally catastrophic biodiversity crisis will affect children much more than adults.

Our “democratic” system seems to have a built in present-centricness, and a weakness in relation to issues of long-term significance, that seriously undermines its claims to democratic legitimacy. Thus philosophers have sometimes argued, beginning with Edmund Burke in the 18th century, that to make the system truly democratic we would need to somehow include – and give real power to – the voices of the past and the future in that system. Most especially, for they are at risk of suffering the worst: the voices of children and indeed of unborn future generations.

So, a forceful argument could be made that it must be legitimate for children to take part in climate actions, for they do not even have recourse to the democratic channels (such as they are) that adults take for granted. This is especially true once we add that it seems reasonable for children to object to schooling that may well be rendered irrelevant by a climate-induced catastrophe. For example, much of the way that economics, business studies and IT are taught presupposes a world that will probably soon cease to exist.

If you are convinced by this, then all well and good. However, at this point, I want to pull the rug slightly from under the argument that I’ve made so far. I put it to you that, if you are an adult, as I am, then your view in any case is somewhat beside the point.

For the brutal fact is that, try hard though some of us have done, we adults have categorically failed our children. This is a grievous wrong, perhaps the worst thing that mammals, primates, such as ourselves, can do: to have let down those who we claim to love more than life itself. We have set our children on a path to a “future” in which society as we know it may have collapsed. And even if we accomplish an unprecedented societal transformation over the next decade, the massive time-lags built into the climate system mean things will still get worse for a long time to come.

And so on this occasion we adults ought to humbly realise that it is no longer for us to tell our children what to do. We ought rather to take up the role of supporting them in their uprising, asking how we can help them in their struggle for survival. They are inspiring us, now.

The ultimate reason why we should support these school strikes, as I and hundreds of other UK academics have just declared we will do, is that, through our inaction that has led the world they will inherit to this pretty pass, we adults have forfeited the moral right to do anything else.