Now, I know for a fact that American energy dominance is within our grasp as a nation.” Ryan Zinke, U.S. Secretary of the Interior (source)

“All Warfare is Based on Deception” Sun Tzu, “The Art of War”

Over nearly a half-century, since the time of Richard Nixon, American presidents have proclaimed the need for “energy independence” for the US, without ever succeeding in attaining it. During the past few years, it has become fashionable to say that the US has, in fact, become energy independent, even though it is not true. And, doubling down on this concept, there came the idea of “energy dominance,” introduced by the Trump administration in June 2017.  It is now used at all levels in the press and in the political debate.

No doubt, the US has good reasons to be bullish on oil production. Of the three major world producers, it is the only one growing: it has overtaken Saudi Arabia and it seems to be poised to overtake Russia in a few years. (graphic source). 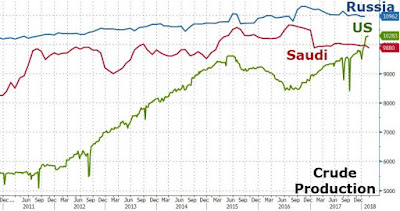 This rebound in the US production after the decline that started in the early 1970s is nearly miraculous. And the miracle as a name: shale oil. A great success, sure, but, if you think about it, the whole story looks weird: the US is trying to gain this “dominance” by means of resources which, once burned, will be forever gone. It is like people competing at who is burning their own house faster. What sense does it make?

Art Berman keeps telling us that shale oil is an expensive resource that could be produced at a profit only for market conditions that are unrealistic to expect. So far, much more money has been poured into shale oil production than it has returned from the sales of shale oil. “Energy dominance” seems to be just an elaborate way to lose money and resources. Again, what sense does that make?

But there is a logic in the term “energy dominance.” It has to do with the way slogans are used in politics: a slogan is not just a compact way of expressing a certain political concept, it is often a coded message that hides much more than it says. So, we know that “bringing democracy” to a foreign country means to bomb it to smithereens. “Make America great again” means subsidizing the fossil fuel industry. “The Indispensable Country” means, “The American Empire.” And more.

There is nothing wrong in using coded slogans: you only have to know how to decode them. So, “energy dominance” has to be decoded and turned into “military dominance.” Then, things start making sense.

One quick note before you accuse me of being a conspiracy theorist: I am reasonably sure that there is no “control room” in a dark basement of the Pentagon or of the White House deciding long-term economic and military objectives. The decision mechanism of modern states is collective and networked. It is akin to that of anthills: there is nobody in charge, plenty of people push in different directions and, eventually, the giant structure may start moving in a certain direction.

So, the fact that so much money has been directed toward the exploitation of shale oil and gas doesn’t mean that someone at the top decided that it was the thing to be done. It is simply, that investors tend to direct their financial resources where they think they’ll have returns, and that may well be the result of a collective hallucination. Investing in shale oil is, basically, a Ponzi scheme but if Ponzi schemes exist there is a reason for them to exist. Even if investing in something doesn’t generate overall profits, it moves money, benefits contractors, raises the GDP, and the more money is invested the more expectations of profits grow. And so it goes until the bubble bursts, but that may take time.

But there is more than that in this story: it is the military side. We all know that wars are won by the side that can pour more resources into the fight. It was in this way that the first and the second world war were won: the allies could produce more energy in the form of oil, coal, and gas. And, with these energy sources, they could produce more stuff: planes, tanks, cannons, bombs, bullets, and more stuff that was thrown at the Germans until they gave up. Matthieu Auzeannau gives us plenty of examples of this mechanism in his book “Oil, Power, and War.” The Germans were always lacking enough oil to power their military machine and that’s why they were doomed from the beginning.

For the military, the lesson of the past world wars is that wars are won by the side which has the largest oil supply. And they remember it. So, if you want to attain military dominance, energy independence is not enough, you need to attain energy dominance.

Everything makes sense also in view of some recent results on the statistical patterns of wars. Wars, it seems, are correlated to the thermodynamic phenomenon of entropy dissipation in complex systems. The more energy there is to dissipate, the faster it is dissipated. And if this dissipation is really fast, it may take the shape of a war — war is the fastest way to destroy (dissipate) accumulated resources. But, in order to dissipate resources, you need to accumulate them first, and that’s the role of shale oil in the current situation.

Which means that shale oil is not a natural resource, it is a military resource. As such, it doesn’t matter if it brings a profit or not for the investors. What matters is how it can be used to maintain and expand that gigantic social and economic structure that we call “Globalization” (another slogan that can be decoded as “the global empire”).

As long as the production of shale oil increases, we face the risk of a new, major world war. We can only hope that the shale bubble bursts by itself first. One more good reason why a Seneca Collapse of oil production would be good for all of us.