At the COP24 conference in Poland, countries are aiming to finalise the implementation plan for the 2015 Paris Agreement. The task has extra gravity in the wake of the recent IPCC report declaring that we have just 12 years to take the action needed to limit global warming to that infamous 1.5ᵒC target.

Although the conference itself is open to selected state representatives only, many see the week as an opportunity to influence and define the climate action agenda for the coming year, with protests planned outside the conference halls.

A crucial role of environmental activists is to shift the public discourse around climate change and to put pressure on state representatives to act boldly. COP24 offers a rare platform on which to drive a step change in the position of governments on climate change.

However, many environmental movements in Europe are not offering the critical analysis and radical narratives needed to achieve a halt to climate change.

By now most people agree that greenhouse gas emissions (including CO₂) are the proximate driver of climate change, and that climate change is not only a future problem, but is already causing significant environmental and social problems across the world. Further, the trend in global CO₂ emissions still appears to be increasing, driven largely by consumption in advanced and emerging economies.

Economic growth measures the increase in the amount of goods and services produced by an economy over time, and it has historically been tightly coupled to CO₂ emissions. Decoupling these two factors is not impossible, and indeed many leading academics argue that the power of human ingenuity will solve the climate crisis. However, this is certainly unlikely in the timescales needed to tackle climate change in a just and equitable way. 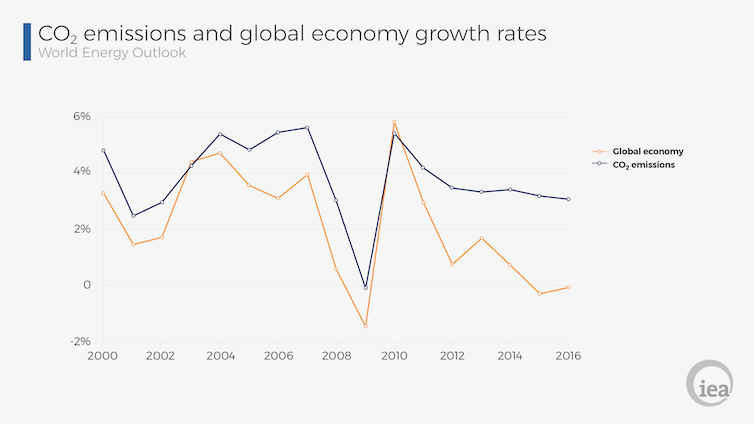 Practically, what this means is that as long as economic growth continues to expand rapidly and indefinitely, so too will the quantity of CO₂ in the atmosphere and the associated environmental and social impacts.

To address climate change, therefore, we must address the root cause of this planetary ailment: the ideology of growth first, growth always. By moving away from growth-oriented societies in Europe and other advanced economies, towards ones that prioritise environmental and social health, we stand the slimmest chance of solving our climate crisis, while still allowing the poorest economies globally to meet their economic needs.

From outrage to strategy

Recent environmental movements demanding action on climate change, like the Extinction Rebellion in the UK and the Ende Gelande Alliance in Germany, don’t seem to take a clear stance on the role of economic growth in driving climate change. They don’t identify our unwavering commitment to the dogma of infinite economic growth as the driving force behind climate change, and as the reason that our efforts thus far have been impotent to stop the growing tidal wave of CO₂ emissions.

In the UK, the Extinction Rebellion has captured the public’s attention and gathered widespread support and media coverage over the past few weeks, with their outraged cries for government action.

However, their demands are broad and unspecific, asking for “net zero [carbon emissions] by 2025”. They make no mention of how the UK government might achieve this, but link to other websites which offer potential routes for reaching this target.

The sites suggested by the Extinction Rebellion promote ideas such as green growth and a green new deal. These ideas are founded on the premise that we can achieve both continually high rates of economic growth and reduce our impact on the planet. Sadly, the evidence (and a dash of common sense) tells us that this is not yet happening, and is unlikely to be possible in the near future. So what should groups like Extinction Rebellion do?

It would currently be considered political madness to advocate for policies that might unintentionally, or intentionally, limit economic growth. Unfortunately, however, without a wider critique of the toxic relationship between climate change and economic growth, governments will be almost powerless to achieve any net zero targets they set.

At COP24 environmental movements have an opportunity to use their platform to highlight the relationship between economic growth and environmental impact, and even to discuss radical alternative futures that are not dependent on a growth-based economy.

Importantly, this doesn’t have to be considered a sacrifice. The relationship between economic growth and happiness in wealthy economies is at best complicated, and at worst nonexistent. This demonstrates the possibility of finding paths to climate stability that do not diminish our quality of life.

By identifying the root cause of climate change, and our inability to address it, these groups can go further than demanding action. They can change public mindsets, put pressure on national governments and point to a shared way forward. Here, we have our best shot at limiting the damage of climate change in a meaningful and timely way.