“Anti-fascist laws are often ignored or not sufficiently enforced in our country,” Councillor Emily Clancy, from Coalizione Civica in Bologna, told Occupy.com.

Normalizing fascism is a global crisis. But through active municipalism, Coalizione Civica (Civic Coalition) is challenging Italy’s far-right lurch. Formed in 2015, the municipalist platform won two seats in 2016 city council elections. Selecting its candidates through a public vote, it pushes other radical municipalist values such as rights to the city, ecological sustainability and social inclusion.

Bologna in northern Italy has a history of resisting fascism. It also suffered the worst post-WWII fascist attack, in 1980, when terrorists bombed the city train station killing 85 people. During WWII, Bologna’s male and female partigiani (partisans) earned the city the Gold Medal of resistance fighting against Benito Mussolini, Italy’s dictator from 1922 to 1945. 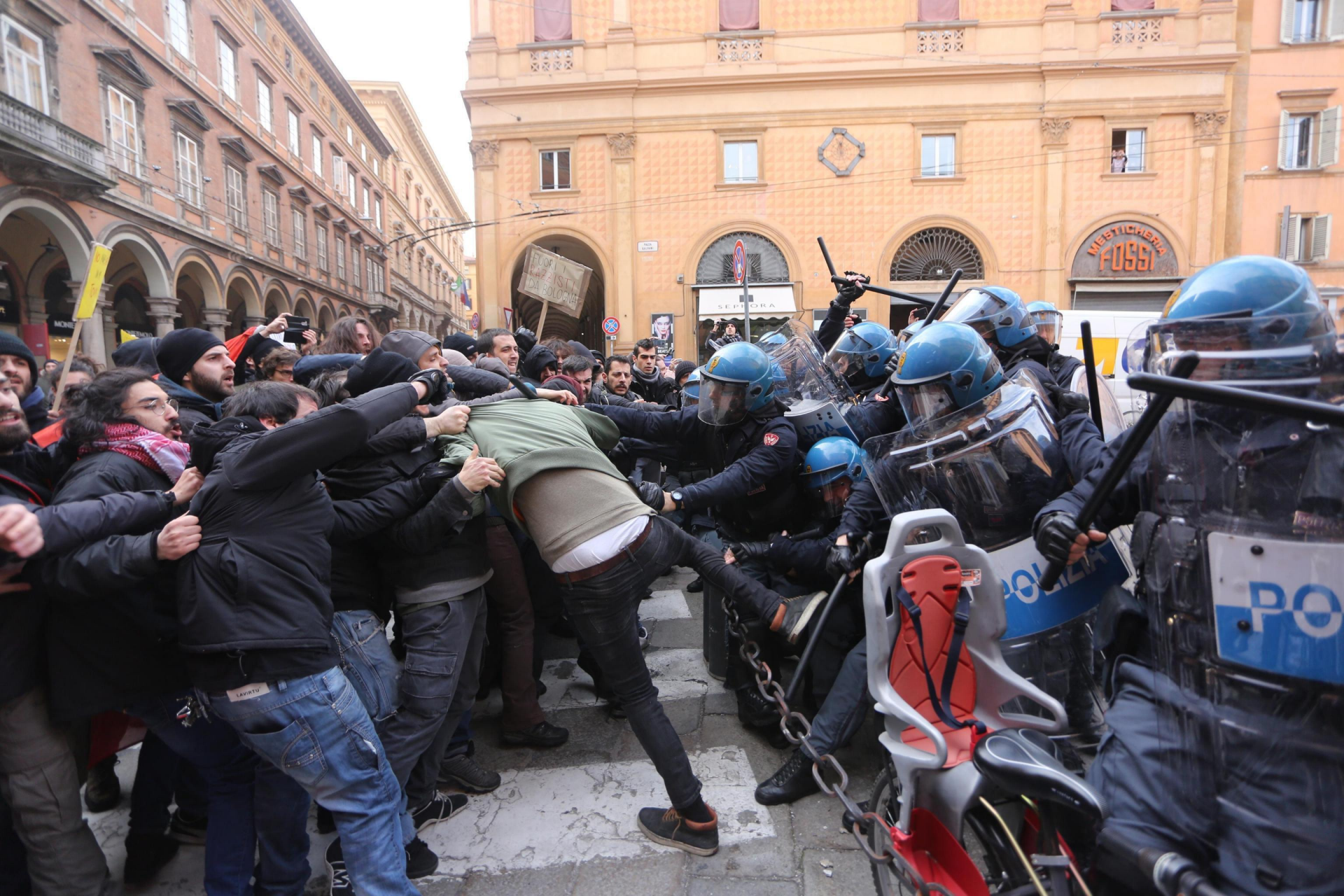 “Regardless of whether their coalition survives or falls apart in a few months, the two parties have already won in Italy the kind of “cultural war” promoted globally by Steve Bannon,” explained Italian anthropologist Vito Laterza about the nation’s latest step toward a dystopian future.

It seems, however, that the coalition is already falling apart. Following President Sergio Mattarella’s veto of a Eurosceptic finance minister, which prompted the resignation of the prime minister-in-waiting, the president appointed an ex-IMF official to lead a technocratic government. But there is no assurance from either party that they’ll confirm his choice. New elections are pencilled in for the autumn.

As the former finance minister of Greece, Yanis Varoufakis, pointed out, the new Italian government was censored by the president not for its far-right anti-migrant policies, but its opposition to the Eurozone – something that will likely play into the far-right’s hand, strengthening its position if and when new elections go ahead.

The recent election campaign catalyzed the modern march of fascism in Italy, a story that ties to Bologna’s history and its ongoing resistance. 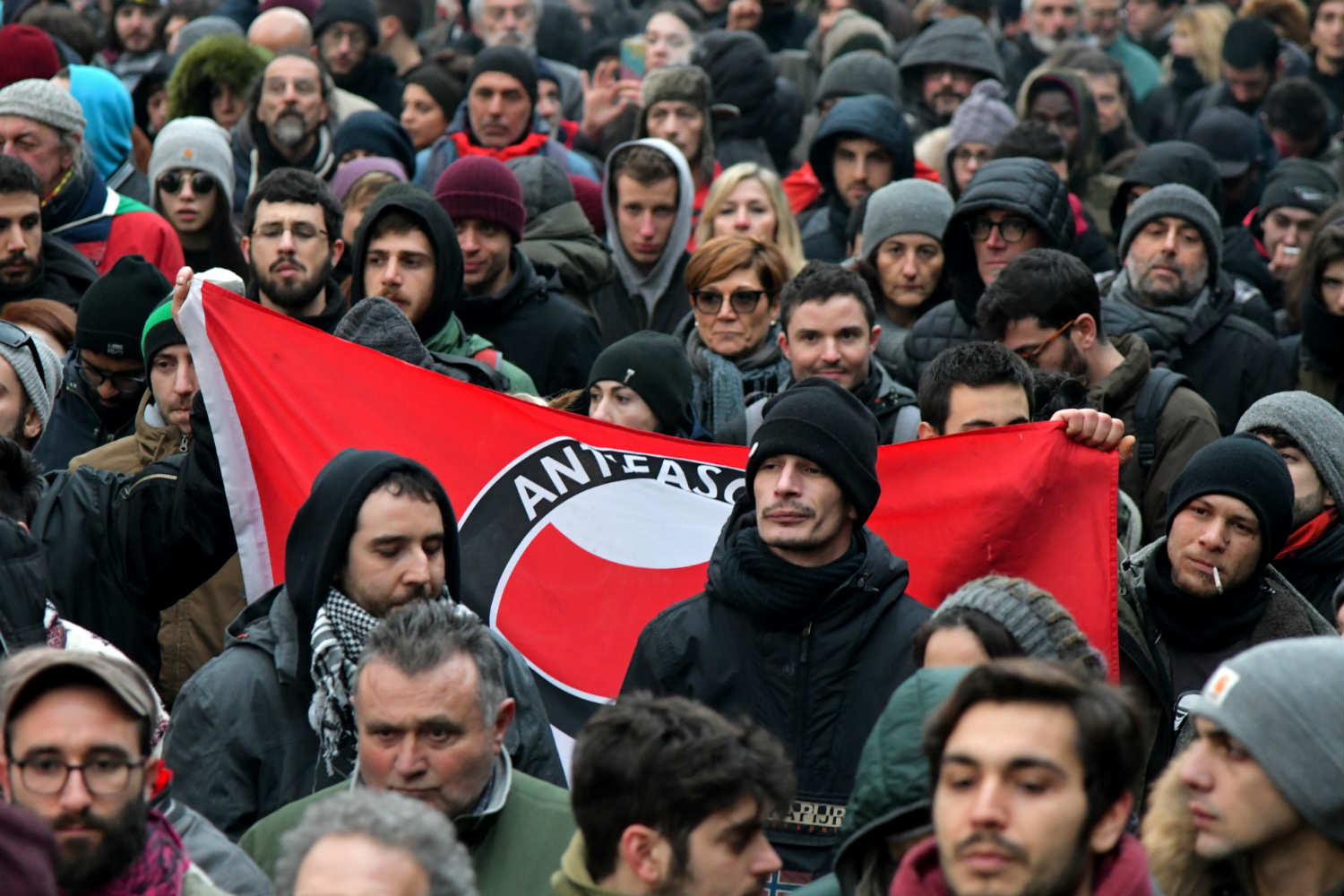 “During the last national electoral campaign, Roberto Fiore, the leader of the extremist political group Forza Nuova, held a speech in one of Bologna’s city center’s squares,” Councillor Clancy explained. Fiore was a fugitive following the 1980 rail station massacre. Afterwards, Britain refused to extradite him to face criminal charges in Italy.

From the UK, he co-founded Forza Nuova in 1997 and returned to Italy two years later, after the legal charges had expired. When Fiore’s fascist rally went ahead in Bologna on Feb. 17, a fortnight before the election, more than 1,000 antifascist protesters showed up to try to prevent it.

Coalizione Civica was active organizing this and other anti-fascist rallies in recent months. Under Italian law, a rally like Forza Nuova’s should be illegal. On Mar. 26, a motion initiated by the Coalition passed in the Bologna city council which made sure the city upheld the law and kept fascists banned from civic places.

“It was crucial to amend the city’s regulations on public space and say those that break our Constitution and other anti-fascist laws will be denied any request for the city’s public spaces and squares,” Clancy said.

The rally in Bologna came after another crucial event that was thought to have propelled the Lega into government. On Feb. 4, six people of African descent were wounded in an act of fascist terrorism in Macerata, central Italy. The perpetrator, Luca Traini, was involved in fascist militias and had run as a Lega candidate in 2017 elections.

As Occupy.com reported, Lega defended this atrocity and used it to gain further electoral support by fueling hatred against immigrants and refugees.

What Italy is seeing, ultimately, is that hatred for marginalized groups has been normalized. One source for this over recent decades is the media mogul and former Prime Minister Silvio Berlusconi, whose TV channel has a regular show demonizing migrants as criminals.

Jacobin’s in-depth reportage explains how Italian fascism never really went away – it only went underground, and is now resurfacing. Two key factors in this historic arc are: 1) fascists parties have often been invited to share power, and 2) fascist violence has never been effectively dealt with.

The far-right has also gained popularity by cloaking its xenophobic ideology and admiration for Mussolini in what are normally considered “left-wing” political actions, such as running social centers, fighting gentrification and using anti-establishment rhetoric.

During a recent visit to a Bologna high school, Clancy reflected on why so many young people are drawn to join fascist groups.

“It was being a part of a group that fascinated them. Little did they actually know of the fascist ideologies those groups were promoting. Again, it’s easy to fall into hate ideologies of these bottom feeders when you feel you are left alone by society and its politicians,” she added.

Clancy explained that a working group from the Coalition is also trying to counter the racist Italian mainstream media narrative.

“They’ve been interviewing citizens and compiling data regarding their ideas of fear and dangerous experiences in their own neighbourhood… It helps to debunk the mainstream media narrative of an increase in micro-criminality particularly at the hand of migrants, which is not supported by any data or statistics,” she said. 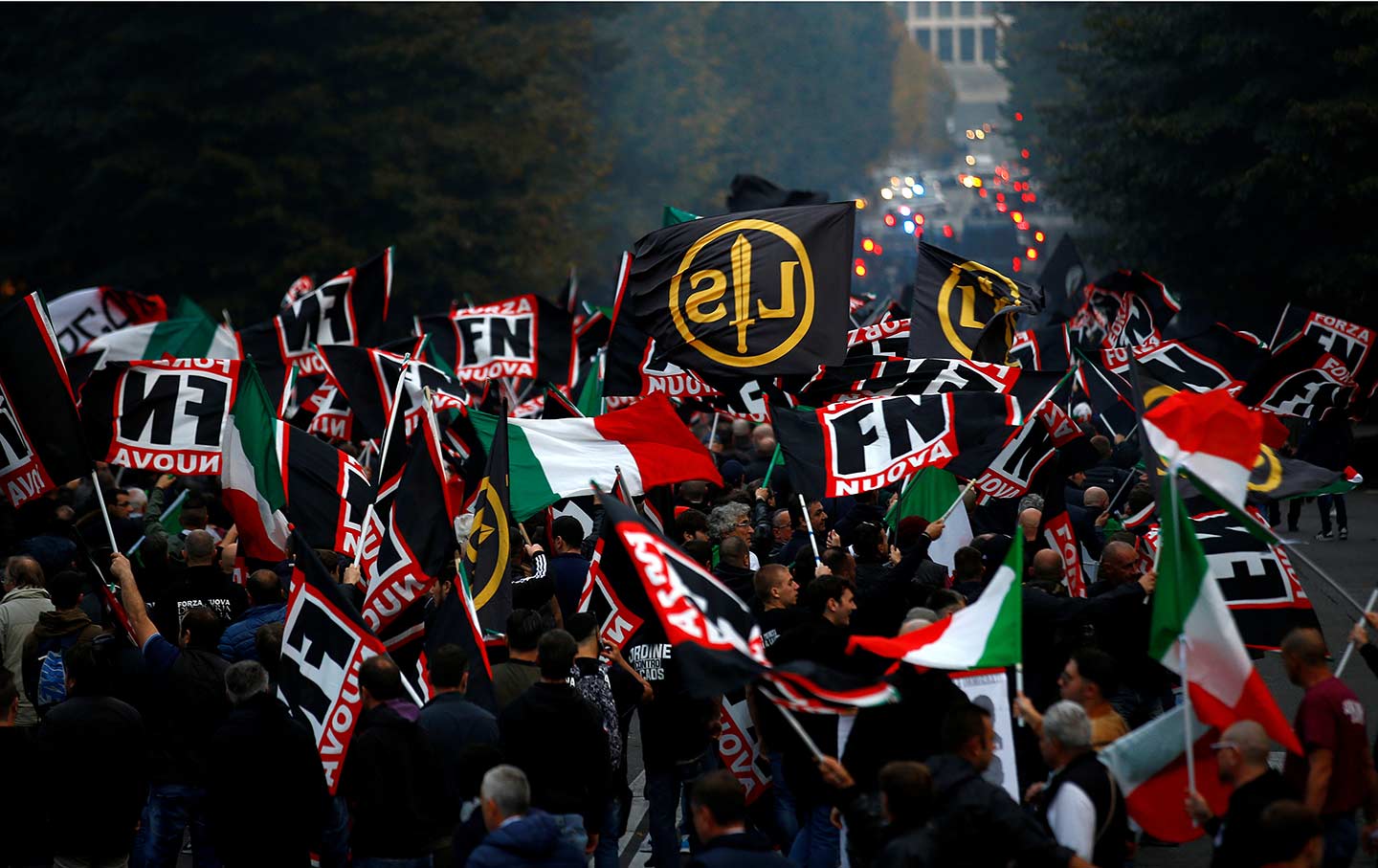 Italy, like Spain, Greece and Portugal, has suffered from severe austerity policies enforced by the EU and other neoliberal institutions, which resulted in increased poverty, cuts to welfare, widening inequality and growing gentrification. Clancy said Bologna needs to change drastically in order to deal with its staggering inequality.

“Poverty can’t be criminalized or marginalized, as the present administration is doing. It needs to be at the foreground of the city’s planning,” she said.

“In this context, youth or disenfranchised people from difficult backgrounds crave that strong sense of identity that neo-fascist formations thrive on.”

As a rebel city that is resisting the crisis and reimagining solutions through a lens of Radical Muncipalism, Bologna faces an opportunity once more to lead the country.

“We hope to build a sense of community that people are really lacking,” Clancy said. “Through participatory politics, we aspire to bring those people into the decision making process and give them a way to express their point of view [in order] to be a part of finding the right solution to their problems. It’s really about being for the 99%.” 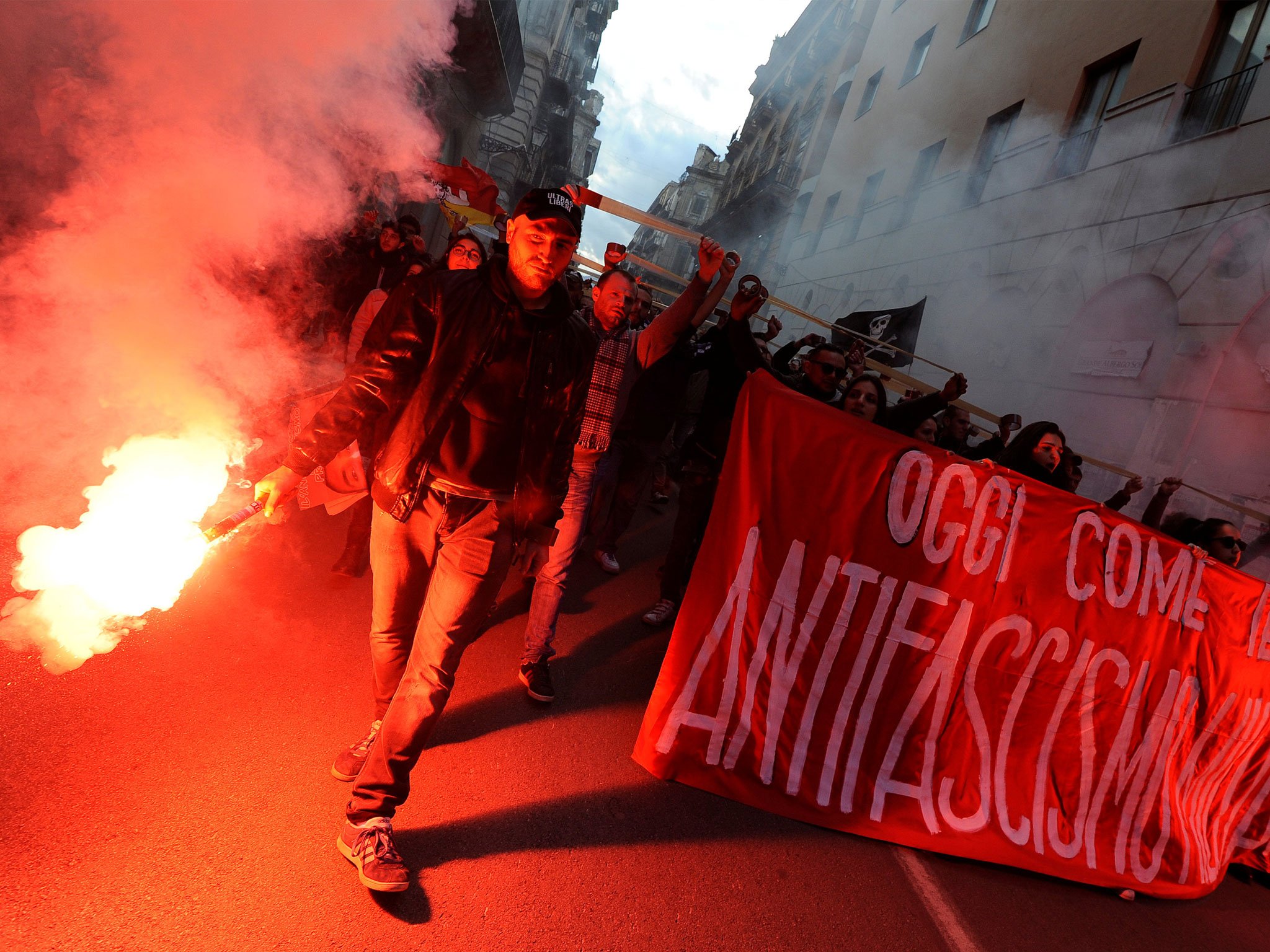