If you’re wondering whether we’re making progress on climate change, it depends on who you ask. It’s been a year defined by both triumphs of community resilience and of urgency prompted by broken climate records. But as much of the world looks for solutions to climate change, it’s easy to forget that one of the most immediate ways to address it is right in front of us: public spaces. To fight off the worst effects of climate change, we need to look to our parks and our streets for answers (Remember, the first Earth Day celebration took place right here, on the streets of New York City)! 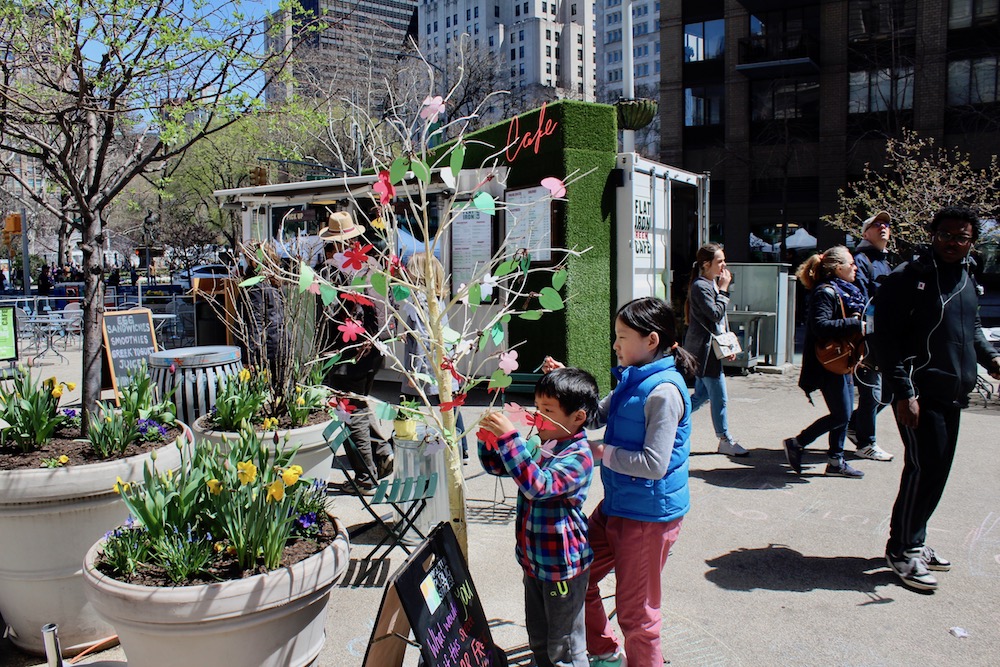 On Earth Day weekend, members of PPS staff attended the annual Car-Free Earth Day on Broadway, to ask people to write down their answers to the question: “What would you do here if the street were car-free every day?” Photo by author.

Environmental challenges are also public space challenges. Cities that face air pollution and congestion because of auto-centric design are also unsafe for pedestrians and cyclists. Increasingly common heat waves pose significant risks to public health, while also making public spaces uninhabitable. There is no impact of climate change that will not be felt in public spaces around the world.

Public spaces are where we experience global environmental challenges at the human scale. By thinking about challenges like climate change as they pertain to places and people, we can use public spaces as tools for both lessening our collective contributions to climate change, and dealing with its imminent effects. 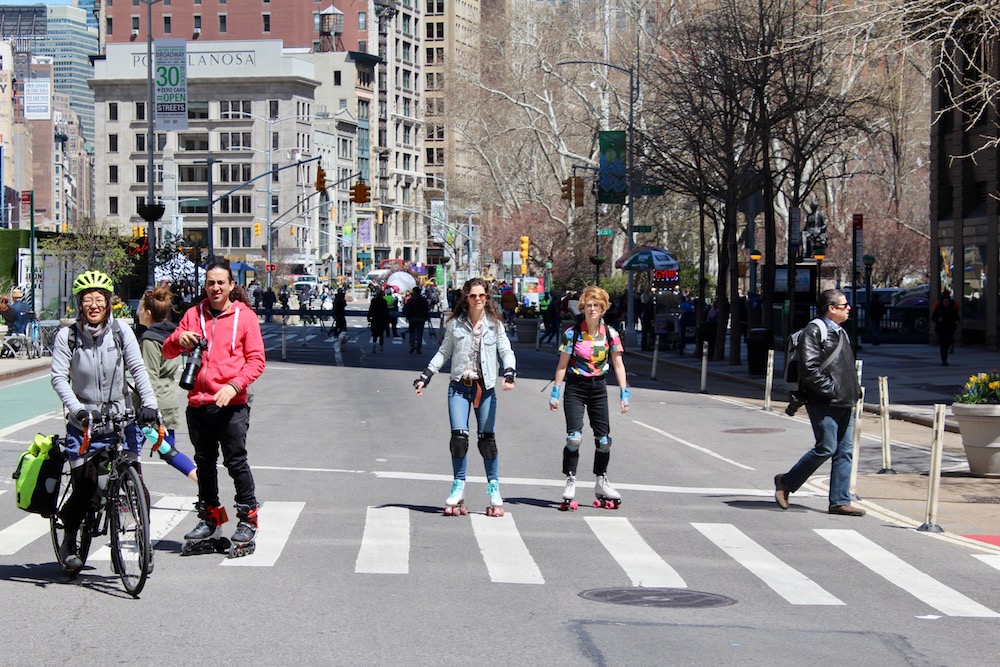 The sheer number of cyclists and rollerbladers/skaters taking over Broadway on Car-Free Earth Day was evidence of streets as a crucial part of the climate fight. Photo by author.

“Traffic congestion is caused by vehicles, not by people in themselves.” -Jane Jacobs

Our lifestyles are shaped by the places where our lives play out; our streets and parks have just as much a role in sustainable behaviors as our homes and places of work. It follows, then, that environmentalism begins with having great places to live out our environmental values. For us to take personal action against climate change, we need public spaces in which we can connect with nature, and perhaps on a more practical level, walk and bike. And that means moving away from auto-centric design to place-led development.

Mass transit and walkable, bike-friendly cities are among the top ways to mitigate the impacts of climate change. So, if streets are seen as places, they can be our best tool in shaping sustainable habits. On Earth Day weekend, PPS participated in New York City’s Car-Free Earth Day as part of a demonstration of what city streets can be without traffic—less than a day after city officials announced permanent car-free plans for NYC’s Central Park. When PPS asked passers-by what they’d use the street for instead of cars, the majority of people had fairly simple responses: They hoped to use the street as a safer place to walk, bike, or rollerblade. Further proof that people will choose low-carbon modes of transport, if given a safe, accessible place to do so. 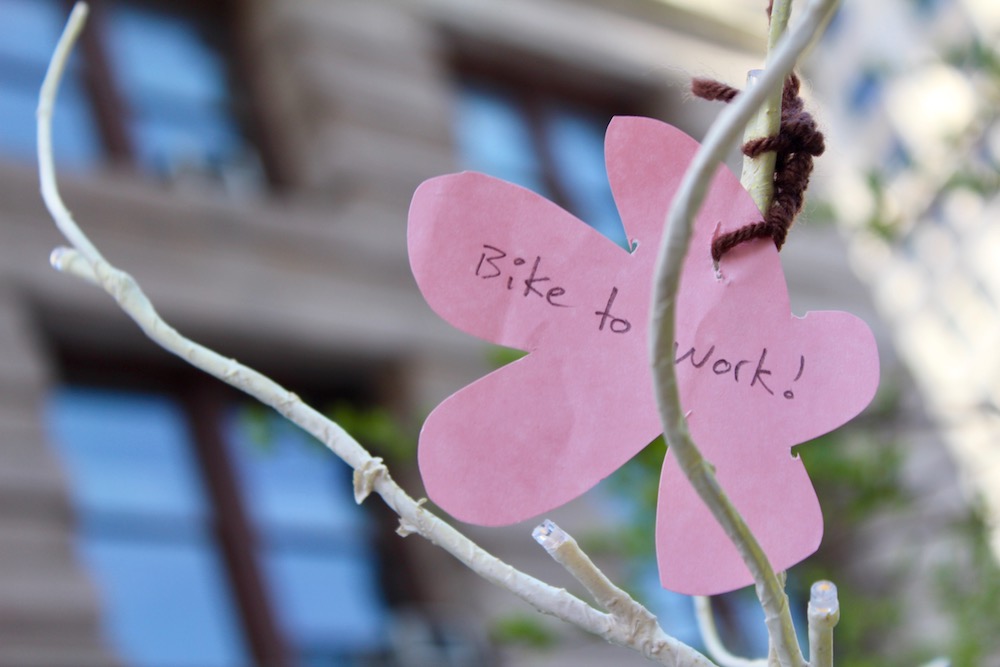 An example of one Car-Free Earth Day participant’s vision for a Broadway without traffic. Photo by author.

BOUNCING BACK: RESILIENCE AS A FUNCTION OF PUBLIC SPACE

“Collaboration is critical for meeting the challenges of our new political and social reality… People is the first foundation, because where else should community resilience start but with the people who live there?” -Daniel Lerch, The Community Resilience Reader: Essential Resources for an Era of Upheaval

Resilience is a result of connections between people, not a physical feature of a place. So, as we adapt to a changing climate, public spaces are the key to strengthening the community ties that help us bounce back from disaster. That is why investing in quality public spaces is increasingly about nurturing communities. They foster social networks that strengthen neighborhoods, and as a result, become hubs for recovery after disasters like climate-exacerbated hurricanes and wildfires. Creating equitable, accessible spaces that attract interactions between all members of a community feeds directly into the type of deep resilience so necessary in an era of climate change.

For some communities, public space has taken on a new importance as they are forced to resettle due to rising waters or inhospitable conditions. In these increasingly common cases of displacement, making quality places in a new home is a matter of maintaining the identity of a given community. In times of displacement or dramatic change, public spaces are a unifier for communities.

Climate change is a complex challenge, but that doesn’t mean that all of its solutions have to be. By creating great places, we face some of the most immediate impacts of climate change, head-on. The fight for a better climate will take place on our streets and in our parks—so long as we make them the places where we engage with our environment, move and live in sustainable ways, and build up the social networks that make our communities resilient. It is time to take the conversation around our climate back to where it began: our public spaces.