Guatemala’s southern coast is in a constant conflict caused by the expansion of agro-industry. Across the region, small farmers struggle to feed their families as companies buy up more and more land for export crops.

Since the arrival of the Spanish to Guatemala in 1524, the country’s fertile southern coast has been the site of some of the most intense social conflicts over land. These conflicts have continued into the 21st century with the massive expansion of sugar cane and palm oil production.

Many of these land holdings have come to include illicit interests, including drug trafficking. But local small farmers, known as campesinos, have pushed back.

Since September 2016, 135 families associated with the Committee for Campesino Unity, also known by its Spanish acronym CUC, have maintained an occupation of a finca, or a large plantation, named Las Palmeras near the municipality of Cuyotenango. They are calling for the state to expropriate the land, which was once owned by a known drug trafficker, to the campesinos.

“We see the necessity [in our communities],” said Marcos (a pseudonym), a resident of the community of Progreso, who is supporting the occupation. “We have no place to work the land due to the amount of monoculture that surround us. They have made themselves the owners of the land. We have taken this finca because we need the land to sow the basic crops.”

The campesinos come from the surrounding departments of Quetzaltenango, Suchitepequez, and Retalhuleu.

The farmers have set up a small settlement on the finca, building small structures, as well as using the houses that are on the finca. They have established a collective store in the center of the finca, where they sell sodas, cooking oil and other common household items.

Since taking the finca, the campesinos have also begun to divide the land among the families. Many families have spent nearly two years sowing and harvesting several seasons of crops, including maize, beans, peanuts and fruits.

“They accuse us of land invasion,” said Francisco (a pseudonym), a campesino from a neighboring town who is supporting the occupation. “This is not an invasion, but rather a recuperation the lands of our ancestors.”

Occupations have long been used in Guatemala by campesinos to gain titles to land. That practice grew dramatically in the 1950s following the passage of land reform under President Jacobo Arbenz. His administration expropriated unused land from large land holders, including the U.S.-based United Fruit Company, to be distributed among landless farmers across the country. After the U.S.-backed coup d’état in 1954, however, the tactic fell out of practice due to the threat of violence.

According to research by Charles D. Brockett, occupations would return to prominence in the late 1970s with the formation of the CUC. The organization was founded during the Guatemalan internal armed conflict and worked for the interests of the small farmers across Guatemala, as well as against structural inequalities and racism. 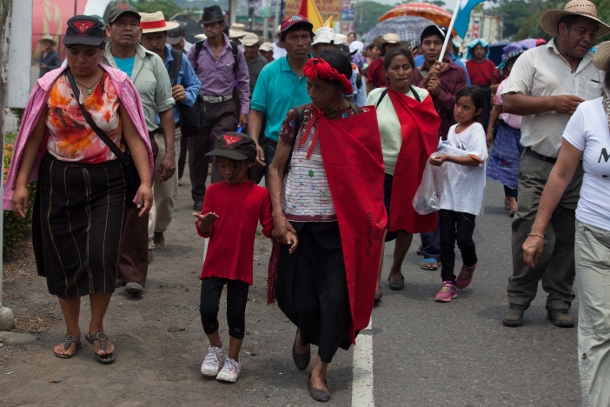 A woman wears a CUC flag while holding the hand of her daughter who wears a CUC hat during the 2016 water march. (WNV/Jeff Abbott)

Since the beginning of the 21st century, the region has seen the massive expansion of monocrops, such as sugar cane and bananas, for export by large landholders. This expansion of export crops further exacerbated the land crisis on the coast, driving many campesinos on the coast to organize to occupy the land due to the inequalities in land availability.

“The problem is that there is a lot of African palm oil, sugar cane, rubber and bananas being planted on the coast,” Marcos said. “These monocrops are leaving us without land to support our families. It was the necessity that drove us to take the finca. [The large land owners] have left us without any land.”

But the support from the CUC has been the key for the occupation on the Guatemalan coast, with the organization providing moral and legal support for the campesinos in Suchitepequez.

“After we launched the occupation, the CUC arrived to provide support,” Francisco said. “The CUC has worked for years to serve and support campesinos across Guatemala.”

The campesinos have also received support from other farmers who have participated in other occupations in the country. They sent others to support the occupation when it began.

“We had a meeting a few days [before the occupation] with other campesinos [that had participated in occupations],” Francisco said. “They saw the necessity of launching the occupation of the land. They decided on the date, where everyone came at 4 p.m. to occupy the land.”

Guatemala has a land problem that has dictated social relations from the Spanish invasion until today. A small percentage of the population controls the majority of arable lands that they utilize for the production of export crops for foreign markets such as sugar cane, African palm oil and bananas. This problem is being exacerbated by the rise of the influence of drug traffickers and criminal networks in the two decades since the end of the internal armed conflict in 1996.

Following the signing of the peace accords, the Guatemalan government established the Land Fund, which was meant to resolve the historic land problem. Yet the high price of the land often keeps it out of reach of landless farmers.

Drug traffickers have increasingly taken to purchasing land as a means of laundering money, and as a means of transporting narcotics through Central America. As the country continues to work to fight drug trafficking in the country, campesinos have increasingly taken to occupying lands owned by convicted and accused drug traffickers, as well as lands owned by their associates.

The case of Finca Palmeras is a good example of this.

The finca was founded when the Ralda family purchased extensive land holdings in the department of Suchitepequez. Prior to the establishment of the finca, the land was largely used for rice production and cattle ranching.

When Manuel Ralda died, he divided the farm among his children, but his children chose to sell the land, including Finca Palmeras. In 1995, the lands of Finca Palmeras were transferred into the national land registry. Campesinos and others lined up to purchase the lands, but the price was outside the range made available by the Land Fund. The owners of the nine caballerias of land (or a little more than 850 acres) were set at 1.5 million quetzales per caballeria, or a little over 205,000 dollars.

“A group of campesinos entered that wanted to purchase the finca,” Francisco said. “But at the time, the Land Fund only provided credit for 1 million quetzales per caballeria. The fund would not provide the money to buy the land.”

Then entered Juan Alberto Ortiz Lopez — commonly known as Juan Chamale — who was one of the principal drug traffickers in Guatemala, and the main connection to the Mexican Sinaloa Cartel. He offered to buy the finca for 3 million quetzales per caballeria, and purchased the property. His goal was to create a front company to hide the transit of drugs from Colombia through the coastal region.

He quickly put in place security to block the local residents from passing through the finca to access the nearby Icán river, which was a popular fishing spot.

“Before we could fish in the rivers without any problem,” Francisco said. “But when Jaun Charmale bought the finca he put in place security guards, and it was prohibited to pass through the finca.”

According to the neighbors and campesinos occupying the finca, Charmale built new routes through the finca in order to move drugs. These routes connected to other fincas, eventually arriving at the Mexican border.

During the time that Ortiz Lopez owned the finca he would rent the lands to the neighboring fincas. This has caused problems for the campesinos occupying the land.

Furthermore, the campesino communities face an uphill battle to gain access to the land. The campesinos have faced intimidation and repression from the nearby fincas, including legal action over their occupation.

“We found ourselves with a problem,” Francisco said. “The neighboring fincas had sugar cane on part of the finca, and they filed a lawsuit against us in order to harvest that years’ crop.”

These lawsuits have included orders for the arrest of the organizers. The farmers also faced an eviction order that the police to date have not carried out.

Ortiz Lopez was finally arrested in 2011 on drug trafficking charges, and eventually extradited to the United States in 2014. At the time of his arrest, he was in possession of eight or nine fincas across Guatemala, which he would rent out to sugarcane producers, especially the nearby finca Palo Gordo. He had used the fincas as a means to launder his money from trafficking.

“The end of [Alvaro] Colom’s administration was when he finally fell,” Francisco said. “The government began to take the cattle that he had on the land.”

The campesinos are emboldened through the Law of Extinction of Domain, which was established in 2010. The law permits the expropriation of any assets of anyone convicted of a crime related to narco-trafficking, or any illicit crime.

Yet the campesinos’ claim is complicated. By the time he was arrested, Ortiz Lopez had put the titles for his land in his youngest son’s name. But campesinos from the region have laid claim to the lands, arguing that the Guatemalan government must apply the law, and expropriate the farm and distribute it among the small farmers.

Despite the constant threat of eviction, the community has yet to see any violence. Meanwhile, other communities that have utilized the same law to argue for expropriating land have not been so lucky.

On October 30, 2017, the residents of the Q’eqchi’ Maya community of Chaab’il Ch’och were violently evicted from the homes they had occupied for a year. Police and military burned houses and crops, as well as the belongings of residents.

The community of Chaab’il Ch’och sits on a finca called Santa Isabel located in the municipality of Livingston, Ixabal. The finca was acquired by a shell company owned by former President Otto Pérez Molina.

In an interview for Upside Down World, one member of the occupation stated that they believed the land was used or going to be used for drug trafficking.

Yet, in spite of the violence against other communities, the campesinos in Suchitipequez are confident that they will emerge victorious.

“We are asking God that we will win, and believe we will,” Francisco said. “For our children, we do not want to see any more malnutrition in our communities.”