Any report on mineral availability that starts with “a semi-infinite deposit” should be taken with great caution – it reminds of when Julian Simon said that we have oil for “six billion years”. About this report on rare earths, I’d say that calling it “clueless” is way too kind. But there is nothing to do: the term “rare” in the concept of “rare earth minerals” rattles so much inside people’s minds that they imagine both a non-existing crisis and non-existing solutions.

So, what do we have here? A grand claim about rare earth resources that comes from a paper recently published in Nature. Let’s go see it. 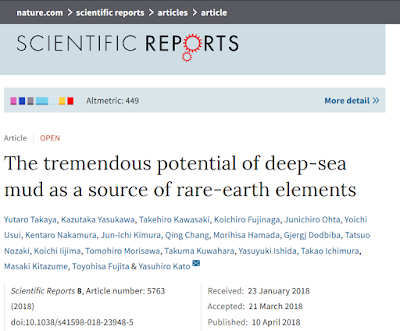 The term “tremendous” in the title of a scientific paper should ring more than a few bells in one’s mind, but let’s go to the meat of the paper, what did the authors found, exactly? Basically, that the concentration of rare earths and yttrium (that they call REY) in the mud of some areas at the bottom of the Pacific Ocean is larger than the average concentration in the earth’s crust.

So far, so good. Then the authors go on to calculate the total amounts of rare earths that could be found in the large areas examined and conclude that these can be considered as “semi-infinite” resources. (the term is straight from the paper, it is not an invention of the journalist of the “Financial Post.”).

At this point, you would ask at what cost these “semi-infinite” resources could be recovered, but this question is wholly ignored in the paper. The only instance where the term “cost” appears is when they say:

Because the amount of the resource is enormous, improving the ore grade will greatly enhance the economic value of the mud even if the recovery yield is somewhat lower than that we observed. A decrease in mud weight and volume will directly lead to reductions in smelting costs.

You wonder what Nature uses reviewers for, right? But, apart from meaningless paragraphs like this one, the problem is fundamental: extraction is not a question of amounts, it is a question of cost and the cost is directly related to grade. This basic point is never discussed in this paper, except for defining the underwater deposits as “extremely high grade.” (and note that they use the term 18 times in the paper!)

“Extremely high grade,” you say? Let’s see. From the maps of figure 2 in the paper, it turns out that for most of the area explored the concentration is well below 2,000 ppm, that is less than 0.2%. In the text, the authors say “REY-rich mud having a maximum of almost 8,000 ppm (0.8%) of total REY content (ΣREY) was confirmed.” But this is a maximum, not an average. Elsewhere in the paper, they speak of larger concentrations, but they seem to refer to special areas.

So, let’s assume, optimistically, that 0.2% is the average concentration of rare earth minerals in this oceanic mud. Is this an “extremely high grade”? Well, high ore grade, in this case, may be all in the eye of the beholder. Let’s compare with what we have on land. There is a recent review by Paulick and Machacek of the situation of rare earth extraction. It is a long and complex story, but the gist of it is that it is difficult to extract rare earths for a total concentration of oxides below 1%. Many mines operate on ore grades higher than 1%, some even up to 6%-8%. Paulick and Machacek state that “Overall, it could be assumed that deposits in the 2–4 wt% grade range may be in a position to add to global REE production at competitive operation costs.”

There follows that the “extremely high grade” ores found by the Japanese researchers at the bottom of the ocean are well below what we need in order to be extractable at costs compatible with the present market conditions.

And that doesn’t take into account that these ores are at the bottom of the ocean, which is a (probably “tremendous”) additional cost. The authors recognize the problem but don’t quantify it, limiting themselves to state that, “if a hydrocyclone can be operated in-situ on the deep-sea floor, it would be possible to reduce lifting costs,” Yeah, sure, and as Lewis Carroll said, “sometimes I’ve believed as many as six impossible things before breakfast.”  Finally, there is no mention of the impact on the marine ecosystem of lifting untold billion tons of materials from the bottom of the Pacific Ocean. An impact that might truly deserve the adjective “tremendous.”

You see how bad this study is, but the problem is not so much the hype (“semi-infinite amounts,” “extremely high grade,” “tremendous potential,” etc.) – after all, hyping one’s minor discoveries to turn them into major breakthrough has become a cottage industry in science. The problem is worse.

The problem is that these claims go straight to the media and are not challenged or, if they are, the challenge is not visible to the public. For the layman, the impression may well be that there are “semi-infinite” rare earth resources, which is not the case. But it is not even the case that we are “running out” of anything. Depletion is not about running out, depletion is about increasing extraction costs and if the extraction of something costs more than what you can afford to pay, then you may as well say that you “ran out” of it. But it is a different story and we aren’t there yet with rare earths: we have time to adapt by using less and recycling.

Still, it seems to be impossible to pass this message to a society whose behavior can be best described as “knee-jerk” reactions – that is, showing only two states of understanding of the situation: complacency or panic (quote by James Schlesinger). It is not the only case in which society as a whole completely misunderstands what the real problems are (just think of climate).

And, as usual, we march into the future blindfolded and along a narrow path with cliffs on both sides