Bertha Zúñiga Cáceres is the general coordinator of the Civic Council of Popular and Indigenous Organizations of Honduras (COPINH) and the daughter of the courageous activist Berta Cáceres, who was murdered in March 2016 because of her struggle to prevent dam building on the River Gualcarque in the Lenca people’s territory.

The murderers of Berta and other COPINH members remain unpunished.

Honduras is the deadliest country in the world to be a defender of the environment. One hundred twenty murders of environmentalists were recorded between 2010 and 2016, and that does not count the threats and harassment that activists have to live with practically every day. This interview was conducted by the Transnational Institute for their 2018 State of Power report.

How did you become involved in the struggle for social and environmental justice?

Well, my involvement started when I was a child, because I went with my mother to all the COPINH activities and took part in all the struggles. I used to go with my brothers and sisters to attend meetings, visit very marginalized communities, and participate on the COPINH radio.

My mother taught me how important it is to get involved in communities, to stand up to those who wield political and economic power, and to learn from the struggle itself. It was part of my personal and political education. My people – the Lenca people – taught me from a very young age that you can’t remain indifferent to the unjust situation in our communities and the country as a whole.

From your experience in the struggles in Honduras, what do you consider the key ingredients for building movements that can challenge established power and build just alternatives to predatory capitalism?

First, movements need to be anchored in grassroots organizations, and let the victims of injustice take the lead as protagonists of the struggle for the control and use of our natural resources, like land and water.

Second, you always have to think about the interconnectedness of these struggles: you can’t separate one issue – such as land – from the others, because it’s a struggle against the whole system. For example, when you’re campaigning for access to school, you’re also fighting for health and healthy food.

Third, we need to build movements that are consistent with our values, and what goes on inside our movements needs to reflect that. It means confronting violence against women in our own movements, because repression can also happen there.

Fourth, the importance of being internationalist. COPINH is the result of a process particular to Honduras, but it also came out of various different uprisings in the Americas, such as the struggles of the many indigenous peoples who have risen up in protest against the economic and social system that predominates in our continent. 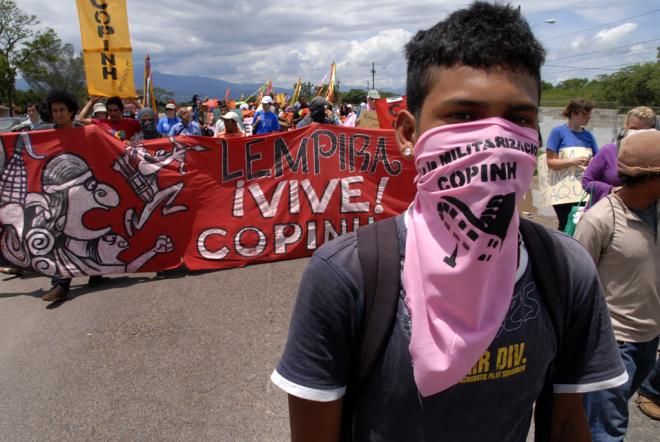 You have suffered the deadly consequences of the repression by the Honduran elites and the transnational corporations that support them, in a particularly brutal way. How do you remain mobilized when faced with so much repression?

This has always been part of COPINH’s history. When we were engaged in the struggle for our territory, the response was always very repressive, especially since the coup in 2010. But at the root of our struggle is precisely this deeply-held conviction that we can’t give in to this situation, and that’s what leads us to mobilize and take action.

When the authorities destroy houses, when they commit so many abuses – even murdering people – there’s no option but to fight. The need for justice means we have to struggle, because we can’t live like this.

We’re also a rebellious people who have fought for our rights for centuries – against the Spanish colonial powers to begin with, and now today against other types of colonialism. We draw strength from our ancestors, who liberated the country and defended our identity as indigenous people. It’s part of our worldview: our ancestors are still walking with us, accompanying us. Our spirituality helps us to cope with these difficult situations.

My mother was never silent in the face of injustice; she was steadfastly committed to the fight against impunity and injustice, and she taught us that we have to face up to the elites who are undermining our future. She always said we have the right to live in a country that respects our rights and a state that serves the people rather than a corrupt oligarchy. Her example helps us to continue the struggle.

We also understand that we’re not alone in this struggle. We’re part of movements in many communities and groups in Honduras, the continent and the world. This was my mother’s experience. Her strength and her energy came from knowing that she was supported, from the fact that this wasn’t a struggle by one individual, but part of a much longer and wider history.

How do we ensure our movements of counter power are not co-opted or – worse – replicate in oppressive structures of power?

Every case is different. But when we need our movements to be consistent, we’re talking about not repeating those corrupt practices. We need to build movements on moral foundations. COPINH, for example, has established people’s courts where cases of violence against women in our movement can be denounced. We’re not afraid of naming the corporations that commit abuses and oppress us. And we maintain our autonomy as a movement, defending our territory and denouncing repressive practices, no matter what party is responsible for them.

This month marks a year since millions of people in more than 700 cities around the world took part in the Women’s March. The #metoo movement in the United States and #niunamenos in Latin America are campaigning strongly against impunity for sexual abuse. Are we at a turning point? What needs to be the lasting legacy of this for our movements and society?

Patriarchal power is maybe the system of domination most difficult to break, and that’s why it’s so important to build movements dedicated to the principles of gender equity. I have the hope that the clarity with which this issue is coming to light all over the world can be reflected in our own movements and society. But in Honduras there are high levels of violence against women’s bodies, with increasingly brutal state violence against the movements and often against women leaders.

I think the murder of Berta and other women from the movement reflects an inability to accept the leadership of women who dare to denounce the owners of dams, banks and corporations. It’s hard to know whether this situation is going to improve in Honduras, because we’re very far from building a system of justice and equality for women, but we must continue to be clear about our path and our conviction to defend life and put a stop to violence.

Do you have any other message or lessons from your experience you would like to share with activists involved in building counter power in other parts of the world?

I think all of us are involved in struggles that seek to make our society – and ourselves – more human. There are no set formulas for counter power because we are all different, but we share the unity of moving forward together, in a consistent and interconnected way, for humanity. We can pass on what we have learned to each other, knowing we stand together in a struggle for life, and that our struggles can bring us closer and make us stronger.