The idea of the energy transition (“energiewende” in German) originated in the 1980s and gained legislative support in Germany in 2010. The idea is good and also technically feasible. But it requires sacrifices and, at present, sacrifices are politically unthinkable since most people don’t realize how critical the situation really is. What we are doing for the transition seems to be is too little and too late.

So, how are we doing with the energy transition? Can we eliminate fossil fuels from the world’s energy system? Can we do it before it is too late to avoid the disasters that climate change and resource depletion will bring to us if we continue with business as usual?

The debate is ongoing and it sometimes it goes out of control as in the case of the controversy between the group of Professor Jacobsen at and that of Professor Clack which even generated a lawsuit for slander. In general, the debate is based on qualitative considerations: on one side we see plenty of naive optimism (“let’s go solar, rah, rah!”), on the other, we have pure statements of disbelief (“renewables will never be able to do this or to do that.”).

But science is based on quantitative evaluations and we have plenty of data that should permit us to do better than play the game of the clash of absolutes. This is what we did, myself and my coworker Sgouris Sgouridis, in a paper that was recently published on “Biophysical Economics and Resource Quality,” titled “In Support of a Physics-Based Energy Transition Planning: Sowing Our Future Energy Needs”

In our paper, we started from the Jacobson/Clack controversy and we tried to use physical considerations (not subjected to the vagaries of markets) to examine how fast we can grow renewable energy. That’s constrained by several factors but, as a first consideration by the fact that we need to invest energy now in order to get energy in the future.

This is why we refer to “sowing” in the title of the paper: every farmer knows that one needs to save some of the current harvest as seed for the future one – enough for eating in the future, but not so much that one would starve. In the case of energy, it is the same. We need to invest some fossil energy for the future harvest of renewable energy, but not so much that society would collapse (it is the “Sower’s Strategy“).

So, we propose an approximate, but physics-based, criterion for the possible speed of growth of renewable energy production. The model provides results similar to a more detailed one that we published earlier on. Let me cite from our recent paper:

These questions can be discussed in terms of the concept of “energy yield” or “energy return” and, in particular, from the “Energy Payback Time” (EPBT), a measurement of the time necessary for a new plant to return an amount of energy equal to the amount invested for its construction. EPBT can be expressed as the ratio of the energy invested in the manufacturing of the plant divided by the yearly energy generated. From this definition, we can derive a measurement of the energy investment necessary in order to obtain a certain yearly production of energy. We perform this calculations in the reasonable assumption of a transition period T that is less than or equal to the lifetime of the renewable energy installations; in this way, we do not need to take into account plant replacement. For equal intervals of time, the energy invested is Einv(t)= Etarget (for t= T) × (EPBT/T). If we set “Etarget” as the current global production per year and we assume that we want to maintain it constant throughout the transition, then EPBT/T is the ratio of the needed yearly investments to the current yearly production. <..>

If, hypothetically, the EPBT were larger than T, the transition would be physically impossible since it would require more energy than the amount that could be produced. Instead, for T=30 years, EPBT values over ca. 5 years would require investing more than 15% of the overall energy production every year, hence making the transition extremely difficult, although not completely impossible. Conversely, values of the EPBT close to or under 1 year would make the transition relatively facile. For instance, an EPBT=1 year implies that about 3% of the world’s energy production would have to be set aside for the transition. Seen in this light, the current values of the EPBT for the most diffuse renewable energy technologies are promising. <…>

These considerations can be compared to the current situation. The nameplate renewable energy capacity that was installed in 2016 was 161 GWp (IRENA 2017). With an average capacity factor that we can assume to be roughly 0.2, it corresponds to an average power generation of 32 GW. In this case, for renewable technologies with EPBT= 3 years, the energy invested is about 100 GW, or about 0.8% of the world’s average primary power consumption, 12 TW (IEA 2016). According to these estimates, the current level of energy investments in new renewable energy is not sufficient to attain the transition within the assumed climatic and energetic constraints. <..>

With these calculations, we show that physical factors provide fundamental insight on the challenge that humankind faces: the energy transition will be neither easy nor impossible, but it will require a substantially larger rate of energy investment than the currently allocated one.

In short, a transition that could maintain the “BAU” (business as usual) is technically feasible and physically possible if we were willing to increase of a factor of 5 (at the very least) our investments in it. Unfortunately, the trend is going in the opposite direction. The global investments in renewable energy seem to have levelled off and In 2016 were approximately at the same level as they were in 2010. Too little, too late. 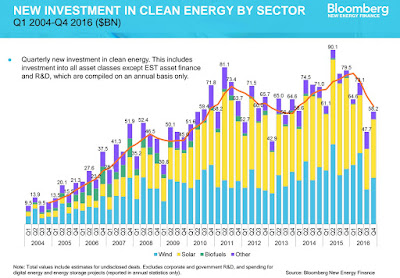 Can we hope for some miracle that would increase the efficiency of clean energy technologies by a factor of 5 in a short time? Unlikely, to say the least. That’s true also for the often idolized nuclear energy which is not more efficient than renewables in terms of EPBT and even more unlikely to go through rapid and revolutionary technological improvements.

So, basically, we are not making it. We are consciously choosing to go down the Seneca Cliff, even though we wouldn’t need to. It is maddening to think that we are failing at the challenge not because the transition is technologically unfeasible or unaffordable, but because the transition is politically inconceivable. Increasing investments in renewable energy requires sacrifices and this is a no-no in our world.

So, what’s going to happen? The fact that we won’t attain the transition doesn’t mean returning to Middle Ages or even to Olduvai, but that in the future not everyone, and not even a majority of people, will have as much energy as we are used to having today. The sacrifices we refuse to make now will have to be made, and much larger, in the future.