As California Gov. Jerry Brown detailed his plans to curb climate change at the 23rd session of the United Nations Climate Conference in Bonn, Germany on Saturday, protesters interrupted his speech to demand tougher climate policies and an end to policies that favor the fossil fuel industry.

The action was organized by It Takes Roots, a coalition of people of color from groups such as the Indigenous Environmental Network and Cooperation Jackson. They went to COP 23 to pressure officials and government representatives like Jerry Brown — who are there to work on specific goals to reduce carbon emissions — as well as to highlight the damage caused to frontline groups, such as indigenous people.

Daniel Ilario, an activist with Idle No More San Francisco and part of the It Takes Roots delegation, attended Brown’s speech because of the history of fracking and refinery expansions in California that affect marginalized communities.

“We [are] demanding more aggressive emissions reductions and a just transition from an extractive to a regenerative economy that respects all life for generations to come,” Ilario said.

The delegation also wants countries in attendance to accept other solutions, such as renewable energy commitments across the globe and preventing new fossil fuel projects from happening. There is a sense of urgency for action as “many of our people, especially indigenous people and people of color, have already experienced the point of no return,” Illario said. “They have lost their lands and their lives. Humans need to remember that there is nothing more sacred than Mother Earth and her natural resources of clean air, water and soil.”

The coalition organized and joined a series of actions before and during COP 23. On November 5, they protested at a coal mine with 4,500 other activists. On November 7, they held a press conference under the banner of the U.S. People’s Delegation, which involved a larger group of organizations, including 350.org, Global Grassroots Justice Alliance, Our Children’s Trust and Sunrise Movement. Speakers from various Pacific islands shared their experiences at a speak out in Bonn. Members of the delegation also spoke at the conference, listing their demands for climate justice to government representatives, reporters and other activists. 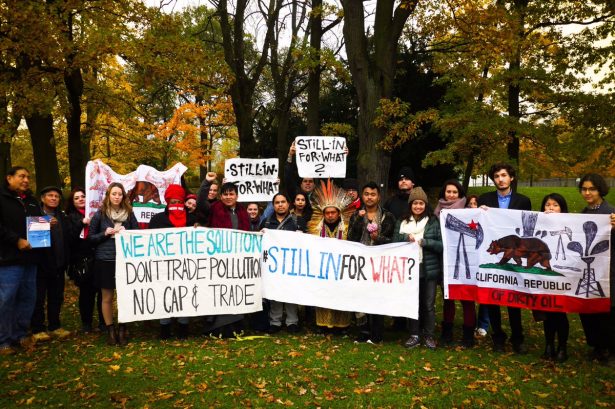 Members of the It Takes Roots coalition in Bonn, Germany. (Twitter/IENearth)

Katia Avilés-Vázquez, a resident from Puerto Rico and member of the coalition, highlighted the impacts of climate change in Puerto Rico. In September, Hurricane Maria, a Category 4 storm, struck the island and destroyed much of its infrastructure. Puerto Ricans are still dependent on imported supplies as they await restoration of services. By the end of October, around 70 percent of the island still had no electrical power.

Avilés-Vázquez, who was personally affected by the hurricane, put forward one demand that the U.S. government could fulfill: reparations. “We have taken it upon ourselves to rebuild our country and rebuild our soil,” she said. “Not only that, we are offering all of you the solutions to get out of this place as we recover together. One of the things we propose is a just transition and just reparations because we all know fossil fuel emissions are the cause of this.”

The delegation is focused on the 2015 Paris climate agreement as well. The current framework guides countries to reduce carbon emissions and, ideally, prevent global temperatures from increasing over 2 degrees Celsius.

Kandi Mossett, a North Dakotan activist with the Indigenous Environmental Network, said that while many countries applauded the agreement, it still suffered from flaws. One is the lack of recognition for the rights of indigenous people. In fact, representatives removed such language from the final agreement in Paris.

“We want to make sure that we’re still at the table having a voice for the indigenous peoples and pushing the United Nations Declaration on the Rights of Indigenous Peoples, which was finalized 10 years ago, but is not necessarily being implemented on the ground in our communities,” she said.

Notably, the accord lacks the signature of just one country: the United States. In June, Donald Trump announced that the United States would leave the agreement, citing its “draconian financial and economic burdens” as a major reason. While Trump is currently on a 12-day trip throughout Asia, his administration is present at the conference to promote fossil fuels as an answer to climate change.

His absence is a major reason why Mossett and others attended the conference. “It’s frustrating to know we have a president who doesn’t even realize what he’s doing or the impacts that he has on the country, let alone the rest of the world,” Mossett said. “He doesn’t seem to care about [that] at all.”

Trump’s carelessness is evident in how he has repeatedly changed his mind on the topic. Months after he announced the United States was leaving the accord, his administration sent mixed messages, at first expressing interest in staying and, later, insisting on leaving without hesitation.

As It Takes Roots ends their series of actions today, the activists in Bonn are urging representatives to take action before it is too late for everyone. Mossett highlighted that activists are in Germany to show solidarity with others affected by climate change and to emphasize that unity is needed to win real climate solutions.

“[Trump] may not be there forever, but the people have to live in these places impacted by the fossil fuel industry forever. That’s what we have to look at — the long term,” she said.