The demonstrations unfolded in over 50 cities — including Seattle, where at least six people were arrested during a protest at a Chase bank — and are being called the largest ever protest against banks’ investments in fossil fuels. As the meeting continues in Sao Paolo over the next two days, solidarity protests are expected in more cities across Europe, Asia and Africa.

The group largely responsible for organizing these Divest The Globe actions is the Seattle-based, indigenous-led divestment campaign Mazaska Talks, which means “money talks” in Lakota. They chose this gathering of bankers as their target because it’s the annual meeting of the Equator Principles Association, which provides guidelines, or so-called Equator Principles, “for determining, assessing and managing environmental and social risk in projects.”

According to organizer Jackie Fielder, activists want to ensure the association gets its “Equator Principles in line with the Paris Agreement, as well as internationally-recognized standards on indigenous rights upheld in the United Nations Declaration on the Rights of Indigenous People.” Fielder went on to cite “the spirit of the Standing Rock resistance camps” as inspiration for the Divest The Globe protests, saying it “really raised the consciousness of people to think about where their money has been going when it’s sitting in a bank.” 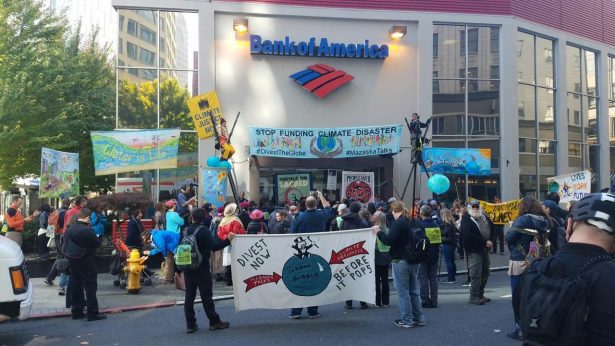 In Seattle, Washington, activists marched toward different banks and staged protests both inside and outside the buildings. (350 Seattle)

Protests around the country differed, with some involving the closure of bank accounts, while others focused on demonstrations outside of banks. In an entirely different approach, Alice Warner, an activist in Eugene, Oregon, took her protest not to a bank, but rather the national outdoor cooperative Recreational Equipment Incorporated, or REI. She and other members of the co-op want REI to divest itself from any bank tied to the fossil fuel industry and are petitioning its board of directors to have a member-vote on the matter next year.

On October 21, as REI members waited in line for a special sale of products, Warner and others spoke with members about the co-op having money in banks tied to fossil fuel companies, whose business threatens the outdoor life of REI owners.

“[We talked] to people about how the co-op was based on purpose over profit, and how its long-term survival depends on a stable climate,” she said, highlighting the wildfires in Oregon as an example of climate change’s impacts in the state.

“This year — especially in parts of Oregon — has been frightening and very emotional,” Warner said. “Not so much as for the people in Puerto Rico or other parts of the globe, but we had days here where you could not go outside because of the smoke from the forest fires. That’s a new thing here.”

Meanwhile, in Austin, Texas, local activists headed to a number of banks across the city. While activists stood outside demonstrating, some locals entered their banks to close accounts and provide a letter of explanation. Those who didn’t have accounts called the banks to voice their demands and express their intention to boycott.

“In a capitalist society, the way you stop [these fossil fuel companies] is through money,” said 350 Austin activist Gil Starkey, citing divestment and boycotts as the two most powerful tactics. He then pointed to institutions and individuals who have pledged to divest nearly $5.5 trillion since 2012, all thanks to the efforts of activists. Divest The Globe aims to keep this momentum going.

“It’s incredible these days of action are happening and that we are shining a spotlight on this issue,” said Justin Morris, a local coordinator for Greenpeace St. Petersburg and a member of the Tampa Bay Divestment Coalition. “We will never stop shining a spotlight until the work is done.”

Morris and other Florida activists went to a Chase bank in downtown St. Petersburg on Monday to deliver a petition signed by 152,000 people from around the world, calling on the bank to respect the rights of indigenous people and withdraw from funding oil and gas projects that negatively affect the environment and health of people. 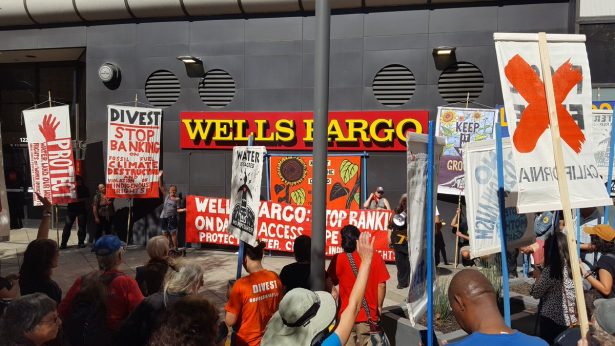 Demonstrators standing outside of a Wells Fargo bank in Oakland, California on October 23. (WNV / Nicole Ghio)

Despite their firm demands, activists are being careful not to target employees or individuals involved with the banks. Isabella Zizi, an activist with Idle No More San Francisco Bay, stressed that the Divest The Globe actions were about the nature of the institutions.

“We’re not targeting these individuals for the jobs they have. It’s more about letting them see how corrupt their job is,” she said, noting that the protest she attended in Oakland was more of a teach-in — since Oakland already divested from fossil fuels and is in the process of divesting from banks tied with oil and gas firms. Nevertheless, Zizi said she admired the resiliency of activists in fighting for a cause.

“The system is not going to break people down. We will stand stronger together no matter the distance,” she said.

Teaser photo credit: On Monday, activists in Washington, D.C. demonstrated outside the John A. Wilson Building — home to both the mayor and city council. (350 DC)