This week we’re excited to announce the official launch of Walking on Lava: Selected Works for Uncivilised Times. A one-volume introduction to Dark Mountain containing forty pieces selected from our first ten issues, Walking on Lava is published by Chelsea Green and available through bookshops or through our online shop.

Over the next two weeks, we’ll be running a series of excerpts from the book, starting today with the editorial. 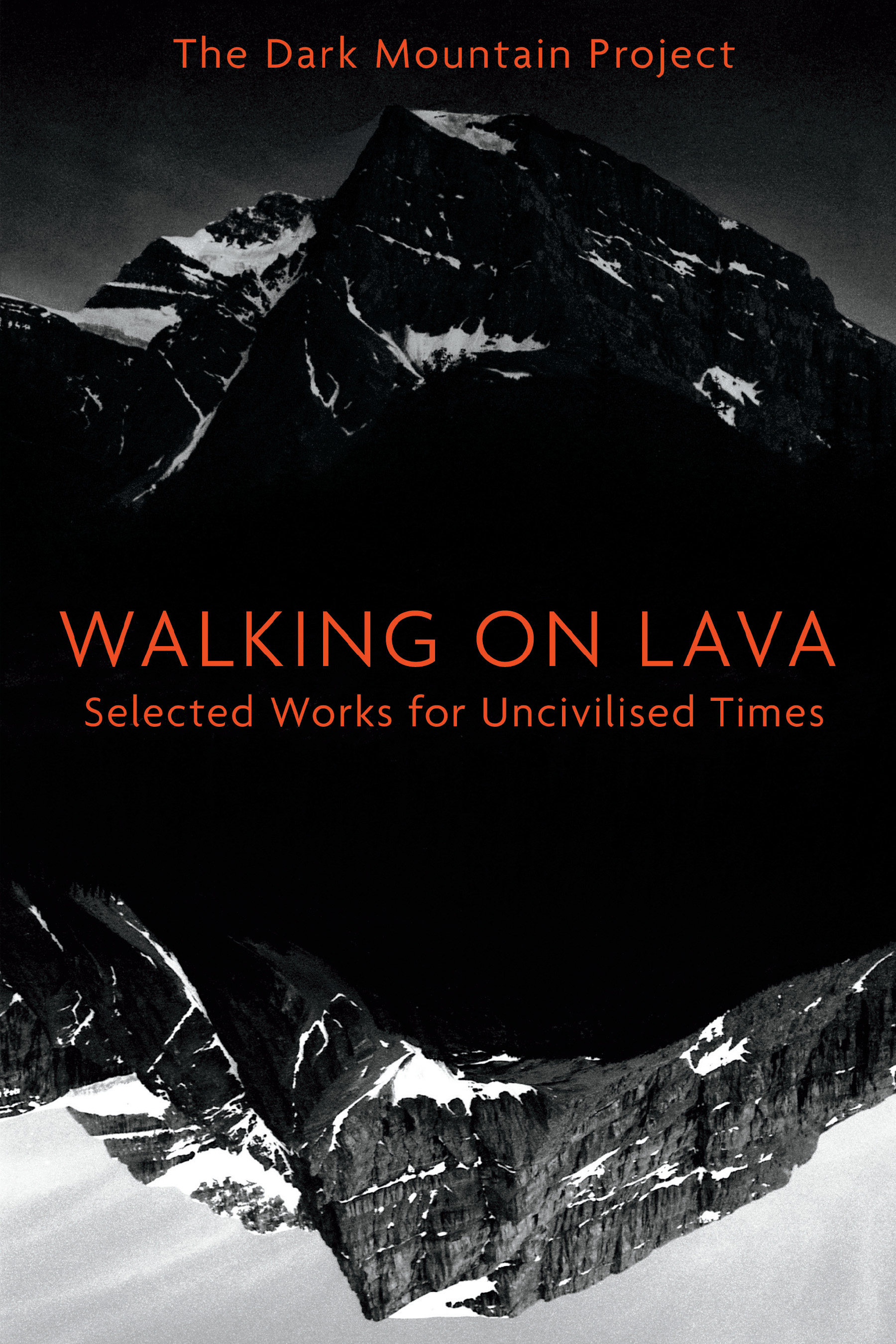 Uncentring Our Minds
An Introduction to This Book

Uncivilisation, the manifesto that launched the Dark Mountain Project, was written in the autumn of 2008, at a time of global crisis and collapse. A firestorm was blowing through the world’s financial system, and for a while it was unclear how much of the world would be left standing when it ended. This book was assembled eight years later, at the end of 2016 – a year in which it was the turn of the West’s political systems to feel the force of a storm blowing through history, upending expectations as it passed through.

The timing, in both cases, seems fitting. Dark Mountain was created by two English writers who felt that writing was not doing its job. In a world in which the climate itself was being changed by human activities; in which global ecosystems were dying back before the human advance; and in which the dominant economic and cultural assumptions of the West were clearly beginning to crumble, that little manifesto – 20 pages long, hand-stitched, bound in red paper – asked a simple question: where are the writers, and the artists? Why were the novels, the films, the music, the cultural forms that passed for ‘mainstream’ in our society still behaving as if it were the 20th century – or even the 19th?

Something else, we thought, was needed. Writers and artists, thinkers and doers, needed to own up to the crises enfolding us, instead of pretending they weren’t happening, or that they were just glitches which could be ironed out by technology or politics. An abyss was opening up before us, and the very basis of our civilisation was in question. It was, declared the manifesto, ‘time to look down.’ If we did, might we be surprised by what we saw?

Uncivilisation, like the modernist manifestos it was inspired by, which had appeared a century before at another time of upheaval, asked these questions to shake people up, to challenge them, to throw cats among pigeons. We wanted writing and art that reflected the dark times we were living in. We wanted writers as prophets, artists who spoke with honest tongues, who might not pretend to have answers but who didn’t hide from the questions. We had no idea what this meant, really, or what it would look like, or where to find it, or whether, indeed, it was already out there and we just didn’t know about it. The whole thing, like all manifestos, was presumptuous, loud, and arrogant. But it worked.

Nearly ten years on, a tiny initiative launched in the back room of a pub to about 40 slightly confused people has become an international network of writers, artists, musicians, thinkers, activists and many others without labels, who believe, as we believed, that honesty about the state of the world is not only necessary but is also a source of energy, and even hope. Once false hopes are shrugged off, once we stare into the darkness that surrounds us, we can see new paths opening up; new forms; new words. The question our manifesto raised – where are all the ‘uncivilised’ writers and artists – began to be answered almost immediately. They were out there, but they hadn’t been able to find each other. What Dark Mountain did – one of the things it did – was to raise a flag around which they could gather.

The results of this gathering have taken many forms. We have run festivals and college courses, worked with national theatres and led mountain expeditions. We have appeared in a strange assortment of media outlets, from radio to TV, from Resilience.org to the New York Times. We run a website which reaches hundreds of thousands of people each year. We host concerts and lectures, storytellers and performers, poets and magicians.

At the core of all this activity, though, we are doing what we intended to do all along: publishing books. Since 2010, Dark Mountain has published a series of beautifully crafted hardback journals, featuring writing and art from around the world. Each book is packed with contrasting voices and genres: poetry, photography, long essays, flash fiction, paintings, reportage and much else, all brought together by a team of editors many of whom first came to Dark Mountain as unknown voices published in the early books.

All of this has been an attempt to bring together the kind of writing we called for back in 2009:

It sets out to paint a picture of homo sapiens which a being from another world or, better, a being from our own – a blue whale, an albatross, a mountain hare – might recognise as something approaching a truth. It sets out to tug our attention away from ourselves and turn it outwards; to uncentre our minds. It is writing, in short, which puts civilisation – and us – into perspective.

Have we succeeded? That’s for others to say. What we can say is that the years which separate the writing of our manifesto from the publishing of this book have seen a widening awareness of the instability of our civilisation and the seriousness of the threats which face it. The kind of arguments which saw us attacked as ‘doomers’ when we published them in 2010 can be found today on the comment pages of international newspapers. It is becoming harder and harder to deny that what we used to think of as ‘progress’ is faltering badly. What happens next is the interesting part.

What can writing do about this? What problems can art solve? In one sense, the answers are: nothing, and none. But in another sense, these are the wrong questions. ‘All civilisations’, we wrote in the manifesto, ‘are built on stories.’ When the stories fail, we need to know how to tell different ones. We need to have the perspective to understand the failure, and the imagination to offer up new ways of seeing. This is what Dark Mountain set out to do: to play host to voices seeking honest engagement with questions which might be intractable. How else does art get made?

Walking on Lava contains words and images selected from the ten books that the Dark Mountain Project has so far published. It will take you from the mountains of Bolivia to the tribal areas of India and from rural California to the coast of Greenland, in the company of passenger pigeons, squirrels, horses, roe deer and wolves. It will whisk you through time, from medieval Florence to 18th century England to prehistoric India to the Younger Dryas. It will introduce you to the history of the future, walk you through the Mahabharata, teach you to think differently about space travel and give you a recipe for pheasant stew.

As we started work on this collection, we wondered how to select from such a diversity of work: what structure could help a newcomer find their way into the territory of Dark Mountain? Then we remembered what we had written at the end of the manifesto. On its last pages, we offered ‘eight principles of Uncivilisation’: a first attempt to define, point by point, what we stood for and what we wanted to achieve.

The writers, thinkers and artists we have met along this journey have taken us to places that were not marked on our maps, but as we retrace the routes we’ve explored together, what is striking is how far they have deepened our understanding of each of those principles. So as you follow our footsteps, you will find Walking on Lava is organised according to those early categories, with each section of writing introduced by a primal image. This selection is far from a full picture of what we do, but it offers one path across the landscape which Dark Mountain continues to explore. We hope to see you somewhere along the way.

Walking on Lava: Selected Works for Uncivilised Times is published by Chelsea Green, and brings together essays, fiction, poetry, interviews and artwork selected from the first ten issues of Dark Mountain. It’s available from all good bookshops, but if you want to support our work then we’d encourage you to order it direct from the Dark Mountain online shop.

And if you’re in London on 5th September, join us for the book launch at Brick Lane’s Old Truman Brewery. The evening will feature readings and performances from contributors and editors, and of course a chance to buy the book. You can reserve your (free) ticket here.